Significant value waiting to be unlocked in Japan

The COVID-19 pandemic has triggered changes in Japan that would have taken many years to initiate in less turbulent times. We believe there is significant value to be unlocked under such circumstances.

COVID-19 as a catalyst

The COVID-19 pandemic has forced Japan to adapt new norms overnight. Prior to the pandemic, many segments of the country had been caught in inertia under risk-averse bureaucrats and corporate managers sticking to their lowest risk options at the expense of potential gains. However, risks from inertia now outweigh risks from implementing change as the adoption of the “new normal” dramatically changes the corporate operating environment.

A large portion of Japanese companies are undervalued relative to their developed market peers and Japan offers significant value to be unlocked, in our view, as meaningful changes are introduced under the new normal.

Chart 1: Percentage of companies trading below book by market 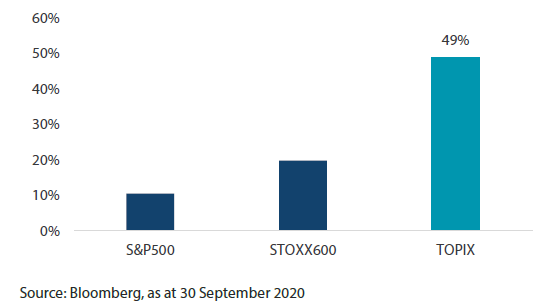 Why are Japanese stocks undervalued?

First, the market still has some distance before recovering to pre-pandemic levels, lagging its global peers. For example, the US has a strong tech sector that led its rally, which Japan lacks. Even discounting the fact that Japan’s tech exposure is relatively low, the Japanese market has lagged the recovery phase seen in many parts of the world since March.

The second reason is the acceleration in market polarization. Looking at the sector returns to date, only communications services and healthcare, in addition to information technology, have recovered to the levels seen at the beginning of the year (as of end-September). Demand for telecom services has increased due to the stay-at-home trend, and gaming companies such as Nintendo have also benefitted from this trend, pulling up the sector. Healthcare, which includes medical equipment and pharmaceuticals, has also risen thanks to the sector’s defensive nature.

On the other hand, recovery by consumer discretionary and industrials, which account for a large amount of the market, has been weak, driven down by automotives, capital goods and transportation.

The style lens provides another view of this divergence. Chart 2 shows the accelerated divergence in returns between growth and value stocks. 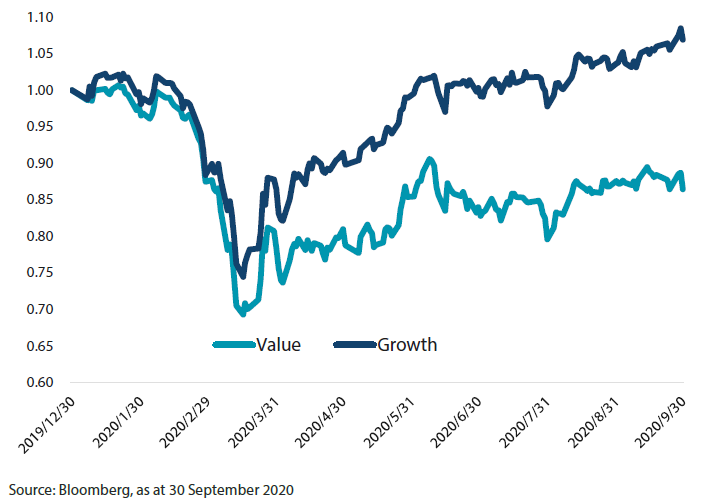 Growth stocks have erased much of the losses from the lows reached in March. Their price to book ratio is now 2.67x, so they do look a little stretched (Chart 3). On the other hand, the undervalued segment represents considerable opportunity to be unlocked. This value group’s price to book ratio is 0.73x, representing a 27% discount to its liquidation value; this ratio is below the pre-pandemic level and even lower than the pre-Abenomics level seen in late 2012. The segment thus respresents significant value to be captured.

Chart 3: Price to book by style 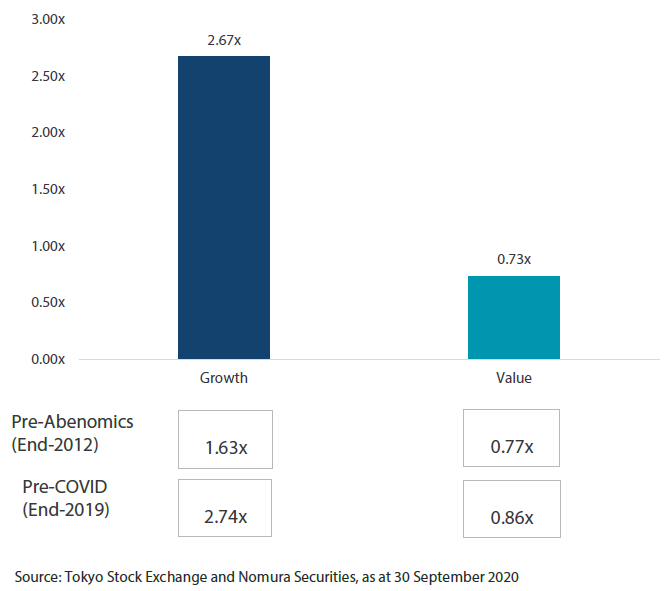 The current valution is attractive for investors with a long time horizon, in our view. In fact we are starting to see some long-term investors coming back into the market, taking notice of the attractive valuation in Japan, focusing on segments previously overlooked.

Examples of such interest include the following:

Within this shifting landscape, we believe that there are three themes of particular significance: technology, corporate restructuring and strong balance sheets.

Technology use, which has accelerated during the pandemic, is particularly important for Japan as it has lagged the world in this area. According to Swiss business school IMD, Japan ranks 27th on global digital competitiveness. This means companies have ample room to catch up.

While Japanese capex spending is seen falling, IT spending is expected to increase by 16% from last year. Retailers are also setting up e-commerce platforms. In a country where cash is still used extensively, credit card usage has soared during the pandemic, and retailers are trying to capture such demand. The users of technology such as e-commerce, have room to benefit further thanks to accelerated investments into technology.

Fast Retailing, the owner of the Uniqlo clothing brand, is investing heavily in e-platforms, with a target to bring up e-commerce ratio to 30% over the medium term. Seven-Eleven Japan started a pilot program in which its stores take orders via smartphones to deliver goods within one hour. Many of these investments will continue to provide support after the pandemic.

Even if the economy does begin functioning “normally”, Japanese companies will still need to re-evaluate their businesses, resorting to drastic measures such as layoffs and divestitures.

Japanese corporations are often associated with hierarchical management. But the pandemic is prompting many to make bold moves out of necessity. Divestitures in the first half of 2020 surged 64% YoY to a 10-year high of 139 cases, and transactions are likely to keep increasing.

Economies of scale to deal with fallen revenues will be of utmost importance amid industry shakeups. The recent takeover of restaurant chain operator Ootoya Holdings by peer Colowide was driven in part to gain the scale they need. We expect such corporate actions to serve as a catalyst for many value stock companies.

This comes amid shareholders also increasing pressure on corporations to make proactive changes following the corporate governance reform initiated by the Japanese government. The reforms are here to stay under the leadership of new Prime Minister Yoshihide Suga.

Japanese companies enjoy strong balance sheets and are in possession of more cash compared to their global peers. For example, while many of their US counterparts are highly leveraged, a majority of Japanese companies are effectively debt-free. Japanese companies have ample downside protection, as many do not have to raise equities.

It also means that many of these companies do not have to raise equities; furthermore, less Japanese companies are cutting dividends relative to their peers in other markets. Dividend payouts in Japan are expected to drop by a higher single digit percentage points during the current fiscal year, much smaller than the 20% decline forecast for the global market.

Even if Japan is caught up in a fresh wave of COVID-19, its cash-rich companies will be more resilient and their dividend payments less affected. When the pandemic eventually runs its course, they have the potential to unlock this significant cash value.

With the COVID-19 triggering changes, Japan offers significant value to be unlocked, with a divergence between Growth and Value stocks creating opportunities for investors with a long time horizon.

Due to the pandemic, changes that would have taken a decade to implement now could be accomplished in a much shorter period of time. Japanese companies have been forced to fully embrace technology and take a serious look at their business portfolios. Corporate restructuring is seen gaining momentum, in tandem with corporate governance reform. Even if Japan is caught up in a fresh wave of COVID-19, strong balance sheets offer Japanese companies resiliency during downturns.