Why losses by Japanese equities have been relatively limited in 2022

Global equities have been on the back foot so far in 2022, weighed down by factors including inflation concerns, the threat of higher interest rates and geopolitical risks. Japanese equities have also suffered in 2022, although their decline has been limited compared to global peers. As of this writing, the Nikkei Stock Average had fallen 2.9% since the end of 2021 while the S&P 500 had shed 13.5% and the MSCI World Index 13.8%. One reason losses by Japanese equities have been limited is because Japan has been less affected so far from the negative effects of global inflation and the geopolitical risks emanating from the Russia-Ukraine conflict.

We believe that another reason behind the relatively good performance by Japanese equities is due to how industries are set up in Japan compared to other developed market economies. With coronavirus restrictions being lifted across the developed world, consumption patterns—particularly in the US—have clearly shifted from those centred on stay-at-home demand to out-of-home activity, such as shopping, dining and traveling. This shift has resulted in lower growth expectations for stay-at-home stocks, in turn also denting growth prospects for giant tech companies. All in all, this development has negatively affected stock market valuations. Japan, in contrast, does not have any notable stay-at-home stocks nor big tech names to speak of. Export growth supported the country during the pandemic; Japan’s industrial structure is centred on export goods, while entertainment services (such as subscription streaming providers) play a limited role. As such, any decreases in stay-at-home demand does not have much of an impact on Japanese stock indices. Furthermore, Japanese exporters have been boosted by the steadily declining yen.

This industrial structure, which has helped limit losses in Japanese equities due to a shift in consumer demand patterns, may suit foreign investors seeking to make defensive asset allocations. Japanese equities may therefore provide a sound choice for those looking to allocate their assets at the country level.

After closing its doors to foreign tourists following the COVID-19 outbreak two years ago, Japan is poised to relax its entry restrictions in a bid to lure back travelers from abroad. Starting later in June, tourists from 98 countries and territories will be allowed into Japan, although visitors will initially be limited to those taking part in guided package tours. The government, which plans to eventually allow the number of tourists to recover to pre-pandemic levels, appears to have been nudged into action after being criticised as the only G-7 nation maintaining stringent border controls. However, the government may not want to take too much risk before the upper house elections in July. Once the elections are safely out of the way with the outcome in its favour, the government may be emboldened to further relax its stance on inbound tourism, and a variety of domestic sectors geared towards foreign visitors could benefit as early as the summer.

As the number of foreign tourists to Japan had practically dropped to zero during the pandemic, even a modest recovery will look impressive. Though likely to be at a very gradual pace, return of inbound tourism will give businesses who had prepared for the 2020 summer Olympics in Tokyo the chance to make up for opportunities lost when the games were closed to foreign visitors because of the pandemic. Following the upper house elections, the government could also take steps to encourage domestic tourism through various subsidy and discount schemes, providing the economy with an additional lift.

The weaker yen, which fell to a fresh two-decade low versus the dollar early in June, is likely to significantly boost inbound tourism. The yen was seen to have enhanced the allure of Japan as a holiday destination back in 2015 when the currency eged above 120 to the dollar. It is currently above 130 to the dollar, which could serve as a powerful incentive for second and third-time visitors. The return of foreign tourists in significant numbers could have a visible market impact as the companies likely to benefit, such as airlines, railway operators and hotel operators, tend to be large-cap stocks.

The Japanese equity market rose in May, with the TOPIX (w/dividends) up 0.78% on-month and the Nikkei 225 (w/dividends) rising 1.61%. Earlier in the month equities were weighed down by factors such as the US Federal Reserve’s big interest rate hike and its decision to reduce its balance sheet. However, from mid-month onward the market rallied as China’s central bank moved toward monetary easing, including cutting mortgage interest rates. Japanese stocks were further boosted by expectations for a return to normal economic activity levels in Japan as the country announced the easing of entry restrictions for overseas tourists which have been in place throughout the pandemic. Of the 33 Tokyo Stock Exchange sectors, 18 sectors rose with Marine Transportation, Mining, and Oil & Coal Products among the most significant gainers. In contrast, 15 sectors declined, including Pulp & Paper; Fishery, Agriculture & Forestry; and Services. 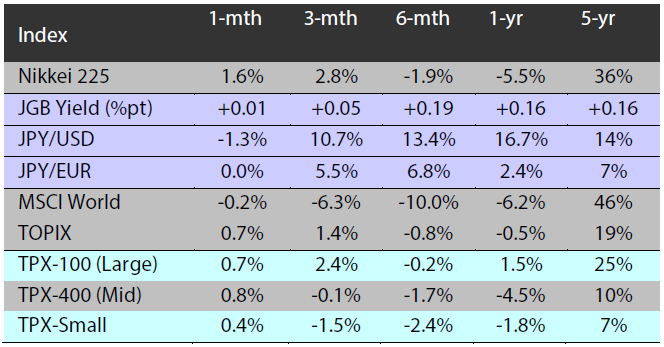 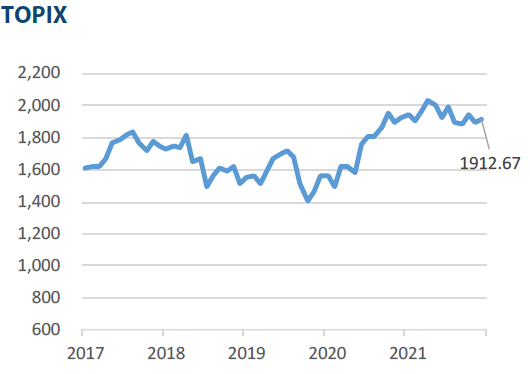 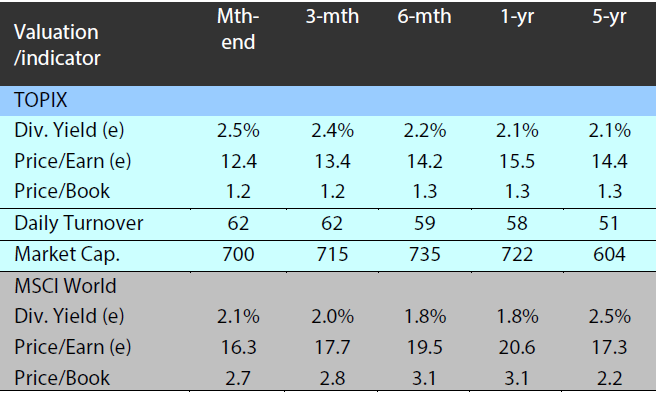 (e) stands for consensus estimates by Bloomberg. Turnover and market cap in JPY trillion. Source: Bloomberg, as at 31 May 2022 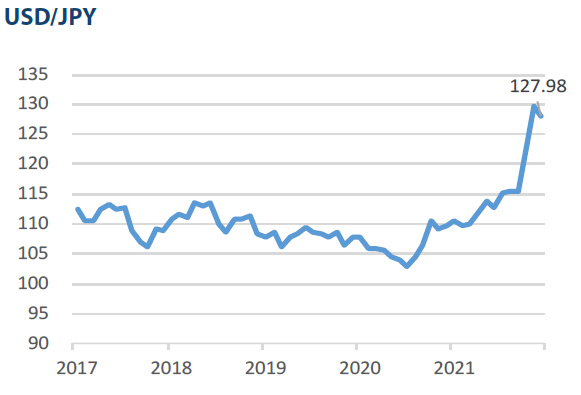