The rapidly weakening yen and implications for the market and economy

One of the main market developments in Japan over the past month was the rapid depreciation of the yen. The Japanese currency was around 122 to the dollar at the beginning of April, but as of this writing it was near 131 and at its weakest in 20 years. To state the obvious, a strong dollar phase and a weak yen phase are taking place simultaneously and fuelling the Japanese currency’s decline. The dollar is in fact gaining against most other currencies, not just the yen, with factors such as strong inflation, domestic demand recovery and rising wages prompting the Federal Reserve (Fed) to accelerate its rate hikes. The yen is doing the exact opposite. It has depreciated against all developed market currencies as it has become obvious that the Bank of Japan (BOJ) has to stick to an easy monetary policy with the Japanese economy still struggling to recover from the COVID-19 pandemic.

Not too long ago a weaker yen was considered a blessing for Japan’s economy and stock market as it was seen as a boost to its exporters. However, the recently weak yen has been receiving bad press, especially from the domestic media. The currency’s depreciation has coincided with the sharp rise in the price of global commodities—notably oil—raising speculation that a declining yen could harm the Japanese economy given its dependence on imports. But we believe such arguments are based on an incorrect understanding of the cause and effect. It is not a weak yen that harms the economy, but rather, the weak yen is a result of insufficient labour productivity slowing down the post-pandemic economic recovery. The focus should therefore be on ways to address Japan’s insufficient labour productivity instead of the weak yen.

What might have come as a surprise to foreign investors is that Japanese stocks have not risen very much despite the yen’s steady depreciation. The reality is that a weak yen has not played a decisive role in supporting Japanese exports. Japanese stocks have been able to gain significantly when the yen depreciated not necessarily because of a weak domestic currency, but due more to the dollar’s simultaneous appreciation thanks to bouts of strength in the US economy. We don’t believe that corporate Japan has benefitted from export dumping conducted on the back of a weak yen any time in recent memory.

The yen will not decline indefinitely, in our view. First of all, the Fed is expected to stop hiking rates as early as the spring of 2023; the BOJ could also relax its yield curve control programme sometime down the road, potentially raising the ceiling on long-term rates slightly from the current 0.25% to around 0.4%. The struggling Japanese economy will also recover slowly. Such a combination of developments in the US and Japan could gradually allow the yen to recover against the dollar. Japanese exports meanwhile are expected to remain robust. According to BOJ data real-term exports have now risen convincingly above pre-GFC highs; we view this as the stimulus needed to boost Japan’s labour productivity mentioned earlier. Once productivity improves, the economy will be able to hum along regardless of foreign exchange levels.

What higher energy and commodity prices mean for Japan

The surge in energy and commodity prices has impacted every country and Japan is no exception. For an economy heavily dependent on imports, higher crude oil prices are expected to add a further push towards renewable energy. This is unlikely to just be a simple economic choice but also a development stemming from a recently heightened sense of a need to bolster national security. Due to Japan’s mountainous terrain, wind power is likely to be favoured over solar power; either way, there is plenty of room for innovation as the country’s relatively weak power grid network needs to be improved to harness new energy sources. Nuclear power is also again in the spotlight, although re-activating dormant nuclear plants could take several years as such steps would require stringent safety checks and agreement from local populations.

Japan’s manufacturers, which in many cases are synonymous with exporters, are expected to absorb the surge in energy and raw materials prices and pass on cost increases. Manufacturers are also benefitting from a steady increase in the quantity of goods they are exporting. On the other hand, sectors reliant on domestic consumption have been hit by higher energy prices, which are like tax hikes. For such sectors, such as travel and tourism, the economy’s recovery from the pandemic will be critical. Fiscal stimulus will also be vital, although the current administration may opt to wait until the upper house election in July is out of the way before taking significant action.

The Japanese equity market ended April lower with the TOPIX (w/dividends) down 2.40% on-month and the Nikkei 225 (w/dividends) falling 3.50%. Stock prices were bolstered by expectations for earnings improvement at Japanese exporters. However, these positives were offset by rising concerns regarding the uncertain economic outlook due to projections that the US will accelerate its quantitative tightening in light of remarks made by the Fed chairman and other signals. Uncertainty regarding the Chinese economy also weighed on equities as the country contends with the spread of COVID-19. As a result, the market declined overall during the month. Of the 33 Tokyo Stock Exchange sectors, nine sectors rose with Fishery, Agriculture & Forestry; Mining; and Electric Power & Gas among the most significant gainers. In contrast, 24 sectors declined, including Marine Transportation, Services, and Electric Appliances. 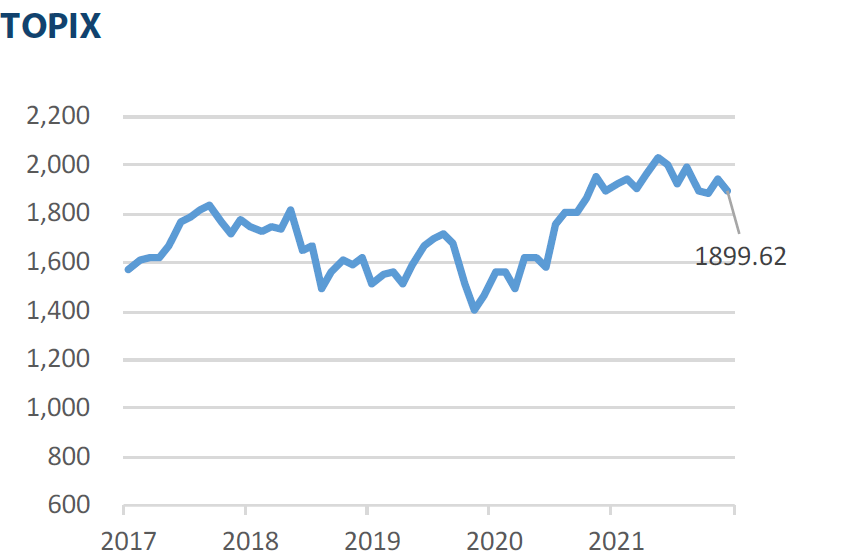 (e) stands for consensus estimates by Bloomberg. Turnover and market cap in JPY trillion. Source: Bloomberg, as at 28 April 2022 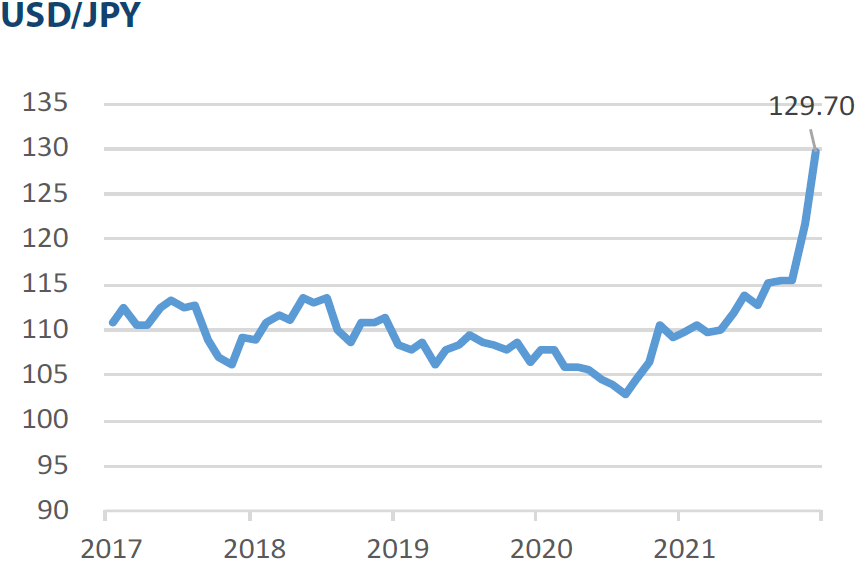