The media has recently reported that share buybacks by Japanese companies may reach a record high in the fiscal year to March 2023. The phenomenon is due to solid corporate earnings, which have enabled Japanese companies to steadily increase both buybacks and dividend payments over the past few years. Earnings have remained strong, recovering relatively quickly from pandemic-induced shocks. Not all companies are performing well, but strong exports driven by demand from overseas have helped stabilise overall earnings despite domestic demand has often sputtering.

The increase in share buybacks and dividend payments may prompt some to ask if Japanese companies have shifted towards a more enthusiastic approach to shareholder returns. However, we need to remember that it makes sense for companies to increase share buybacks and dividend payments when they are enjoying a sizeable rise in earnings. While Japanese firms appear more favourable towards shareholder returns, there is room for improvement. The increasing emphasis on corporate governance, which has encouraged the unwinding of cross-shareholdings, has also played a role in boosting buybacks. As cross shareholdings are unwound, buying back shares has become one method for companies to curb the amount of their own shares circulating in the market, thereby reducing the risk of interference from certain buyers.

A lack of viable capital expenditure and M&A projects has left companies with a lot of cash. Rather than keep it as a non-operating asset, using it to conduct buybacks is seen as a way to improve capital efficiency. Regardless of the intent, share buybacks appear to be a factor shoring up the overall Japanese equity market. Ideally, the animal spirits in the market will compel companies to actively direct their cash to capex, which entails more risk but can also deliver higher returns than share buybacks. For this to happen, domestic demand first needs to recover from the negative effects of the COVID pandemic.

As mentioned above, reviving domestic demand weakened by COVID-induced setbacks is the immediate challenge for the Japanese economy. Japan was an exception early in the pandemic, keeping infection numbers remarkably low. More recently, however, Japan has seen the highest number of new infections among developed economies. This is a setback for domestic demand as it negatively affects the tourism, retail sales, travel and hotel sectors. Overall, domestic demand fluctuations do not have a major impact on the equity market, due to its large number of exporters. The same cannot be said of Japan’s GDP, however, which will suffer the effects of sluggish domestic demand more acutely. That said, sooner or later the economy will make a shift towards “living with COVID” in earnest once the latest wave settles (as of this writing, new infections were declining steadily from mid-August peaks). Furthermore, in a potentially positive move for the economy, the government has opted to ease restrictions on inbound tourism and raise the cap on the number of people allowed to enter the country each day.

The government is therefore likely to promote living-with-COVID policies, allowing itself a chance to enact fiscal initiatives (such as travel subsidy plans) aiming to normalise the economy. While such policy initiatives will be supportive for the economy, the government has still done little to prepare the country’s medical system to care for severely ill COVID patients should Japan be hit by another wave of infections. Prime Minister Fumio Kishida losing public support due to the government’s perceived lack of initiative on COVID measures is therefore a potential risk. That said, there appears to be no viable candidate to replace Kishida, therefore the impact from a decline in public support ratings may be limited.

The Japanese equity market rose in August, with the TOPIX (w/dividends) up 1.21% on-month and the Nikkei 225 (w/dividends) gaining 1.10%. In the first half of the month, Japanese equities climbed higher, supported by solid domestic corporate earnings from the April-June quarter due in part to the positive impact of the weak yen, in addition to expectations that the US Federal Reserve would curb the pace of policy rate hikes in light of lower-than-expected growth in the US Consumer Price Index (CPI). However, the market was weighed down later in the month on concerns regarding a global economic slowdown after the Fed Chair’s remarks at the Jackson Hole Economic Symposium signalled the continuation of rate hikes in order to prioritise the fight against inflation.

Of the 33 Tokyo Stock Exchange sectors, 25 sectors rose with Air Transportation, Wholesale Trade, and Mining among the most significant gainers. In contrast, 8 sectors declined, including Other Products, Real Estate, and Services. 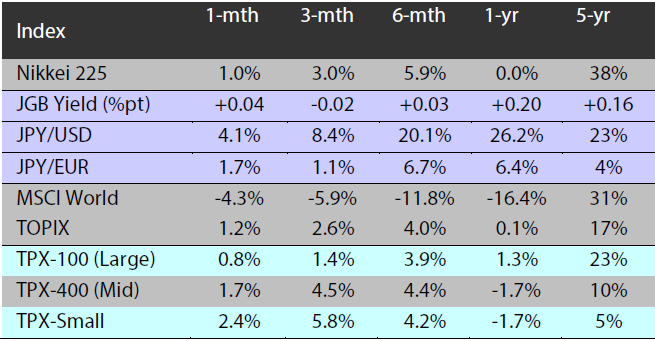 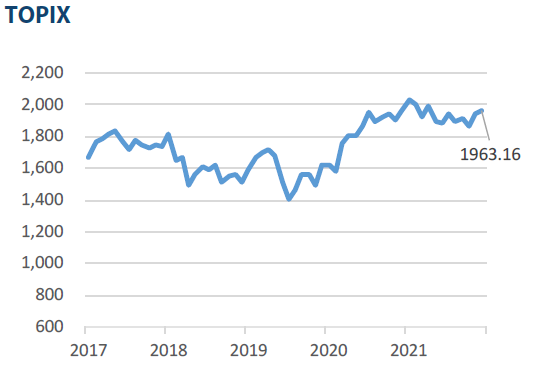 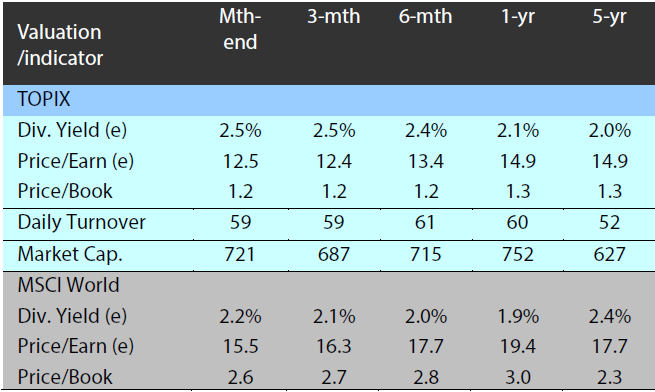 (e) stands for consensus estimates by Bloomberg. Turnover and market cap in JPY trillion. Source: Bloomberg, as at 31 August 2022 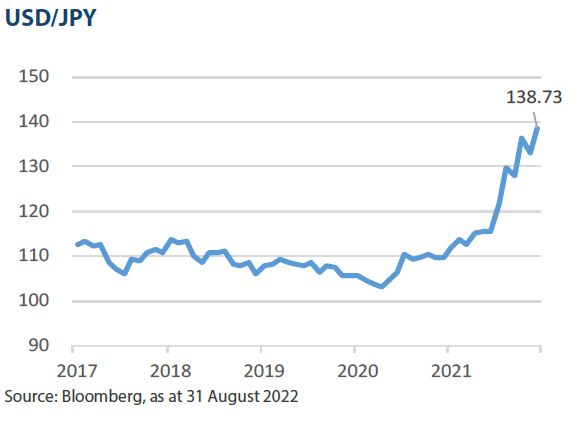