What immediate impact could Japan’s full reopening have on the economy and markets?

After effectively closing itself off at the height of the coronavirus pandemic, Japan is ready to catch up with much of the world and fully reopen its borders. From 11 October, the government will reinstate visa-free visits and lift the daily arrival cap on the number of visitors. COVID-19 testing and quarantine requirements will also be scrapped, although visitors will still be required to show proof of vaccination.

Japan throwing open its borders after two and a half years of restrictions is naturally creating some excitement with hopes that an influx of visitors can provide a much-needed boost to the tourism industry and the broader economy. The easing of border restrictions is a positive development. That said, consumption related to inbound tourism is unlikely to immediately recover to pre-pandemic levels absent tourists from China, which places restrictions on outbound travel under its zero-COVID policy. According to Japan Tourism Agency data, Chinese tourists made up roughly a quarter of the seven million visitors during the October-December quarter of 2019. In 2018, spending by tourists from China and Hong Kong accounted for nearly half of consumption by tourists.

Even in the absence of Chinese visitors, the return of foreign tourists is still expected to have a positive psychological impact from a market and economic perspective. That said, tourism and travel-related sectors are relatively small in terms of market weighting in the TOPIX and the Nikkei 225, so a revival in inbound tourism, regardless of how large, is unlikely to have a significant effect on market indices.

Even if inbound tourism does not immediately return to pre-pandemic levels, the presence of foreign tourists could trigger a comeback in domestic tourism, which in pre-pandemic consumption terms was estimated to have been five times larger than inbound tourism. But for a sustained revival in domestic tourism to take place, Japan’s COVID-19 infection numbers will have to come down significantly. In late August, daily new cases in Japan were the world’s highest, topping 200,000. The numbers have since declined but daily new cases were still at a relatively high 55,000 as of this writing. The government may therefore have to enact measures to further reduce the number of cases for domestic tourism to revive fully. The implications stretch out through the tourism, restaurant, travel and transport sectors, which collectively employ a significant amount of people. Therefore, addressing the coronavirus situation may be a higher immediate priority for Japan than reopening the country.

One of the initiatives Japanese Prime Minister Fumio Kishida has been pushing under his “new capitalism” drive is the “asset-income doubling plan”, which aims to double the amount of income households gain from financial asset investments. At a speech at the New York Stock Exchange (NYSE) in late September Kishida said Japan was considering making permanent the tax-free investment period of the Nippon Individual Savings Account (NISA) investment scheme. The pillar of Kishida’s asset-income doubling plan, NISA currently exempts capital gains taxes on investments for a five-year period. Kishida pointed out that of the estimated JPY 2,000 trillion in personal financial assets, only about 10% are invested in stocks, a figure the government would like to increase.

For Japanese individuals to invest more in domestic stocks, however, the government may have to overcome individuals’ preference for US equities. In addition, among those who do take part in the domestic market, many tend to limit themselves to short-term trading instead of investing for the long term.

Tax incentives related to capital gains alone are unlikely to significantly alter the preferences and behaviour of individual investors. Rather, improving financial education could have a greater impact over the long term. Fortunately, the Financial Services Agency is taking an active role in improving financial literacy through a recent change that makes financial education a mandatory part of Japan’s high school curriculum. This undertaking may require a decade or more to bear fruit; the task includes forming and training educators qualified to teach financial education. Furthermore, beyond improving financial literacy, the government will also have to pursue policies that significantly improve Japan’s appeal as an investment option, so individuals do not bypass their own country for others like the US.

The Japanese equity market ended September lower with the TOPIX (w/dividends) down 5.49% on-month and the Nikkei 225 (w/dividends) falling 6.89%. The Japanese government’s announcement of plans to further ease the border entry restrictions in place throughout the pandemic was a positive factor for Japanese equities, but concerns regarding the potential for the global economic slowdown to accelerate weighed down the market overall. Downward pressures included a higher-than-expected jump in the US consumer price index (CPI), concerns regarding the higher pace of the US Federal Reserve’s rate hikes, and a succession of Western central banks shifting toward monetary tightening in order to curb inflation. 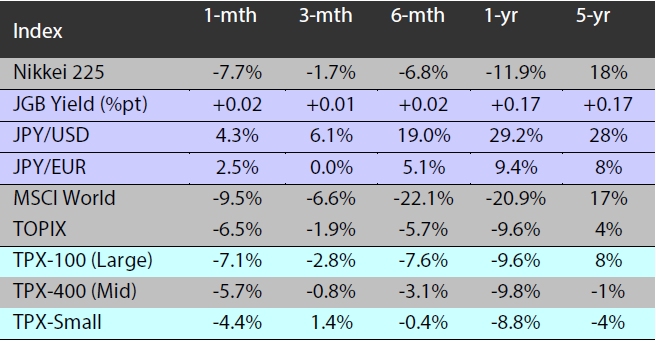 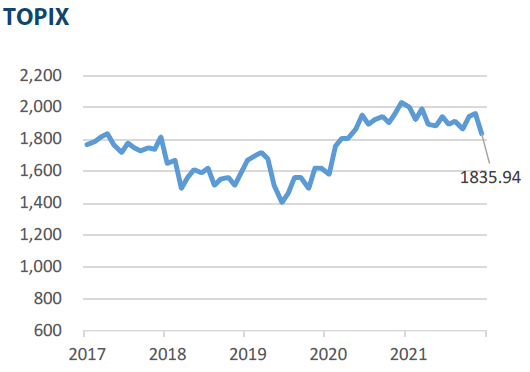 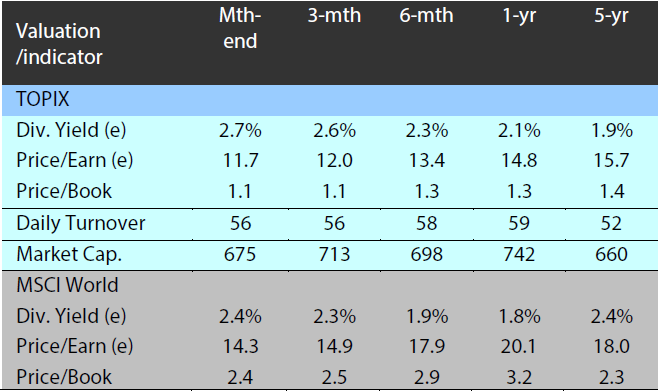 (e) stands for consensus estimates by Bloomberg. Turnover and market cap in JPY trillion. Source: Bloomberg, as at 30 September 2022 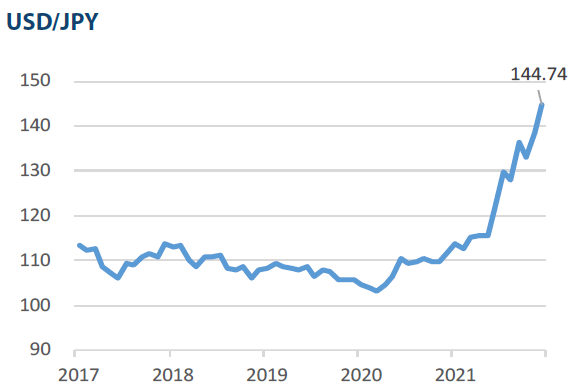