Japan caused a stir in the financial markets recently by conducting its first yen-buying intervention since 1998. Japan intervened in September and October to halt the weakening of the yen, which this year touched a 32-year low against the dollar. For now, the yen’s steep slide has slowed, with the currency trading near 147 per dollar as of this writing after almost reaching 152 late in October.

Japan’s intervention has attracted significant attention given the record sums it has poured into the currency market. However, although it has already spent trillions of yen intervening, Japan is not on a mission to change the entire course of currency trends. The Ministry of Finance has said the interventions are “smoothing operations” aimed at taming market volatility; it falls within reason for Japan to intervene and support broader sentiment when currency gyrations can be a burden to an economy already taxed by a surge in raw materials prices. The interventions will not ultimately be able to alter the strong dollar trend; and if that were Japan’s intent, the measures would likely be met with opposition from the US. Furthermore, Federal Reserve (Fed) policy is beyond Japan’s control (the widening the US-Japan interest rate differential is seen as a key factor behind the recent USD/JPY acceleration).

From an equity market perspective, the interventions aim to reduce market volatility. The yen buying may temporarily increase volatility, but it plays a role in smoothing out what may otherwise be bouts of extremely sharp USD/JPY rises. And while the interventions may not be able to prevent the dollar from gaining against the yen in the long term, they can stabilise currency levels and remove some of the choppiness from the foreign exchange market. This would be supportive for both equity market and corporate sentiment. Regarding the dollar, the equity market is focused on when the Fed might begin slowing the pace of its monetary tightening. From the yen side, Japan reopened its borders to foreign visitors in October and its economy has become more resilient to the lingering negative effects of the pandemic. Japan’s recovery from the pandemic could begin gaining traction as early as March, and currency interventions could buy time for the economy until then.

Japan’s September core consumer price index (CPI) rose 3.0% year-on-year, underscoring steadily increasing inflationary pressures. The core CPI rise may still be small relative to inflation levels in other developed economies but it was nevertheless a surprise. While some may assume that the Bank of Japan (BOJ) will begin thinking of raising interest rates, such assumptions could be premature as the central bank likely sees the CPI surge as a temporary phenomenon. The BOJ may view any wage hikes accompanying the price rise to also be temporary, consisting of bonuses rather than more permanent salary increases. For a more sustainable rise in wages, Japan may need increases in overall productivity, sales and profits.

That is not to say that wages have been stagnant in all quarters, as a number of companies have begun increasing employee pay. If such trends expand, a company’s approach to wages may become an important metric for investors to consider. That said, a firm’s ability to pass on price increases to consumers—in short, its pricing power—could become an even more important factor if inflation lingers. Companies with strong brands or manufacturers of essentials will be in a favourable position to pass on price increases; in turn, such advantages may allow them to increase employee wages on a permanent basis. We believe that it will become important for investors to differentiate such companies from those that raise wages simply on higher profits from a weaker yen.

The Japanese equity market rallied in October, with the TOPIX (w/dividends) up 5.10% on-month and the Nikkei 225 (w/dividends) gaining 6.37%. During the month, stocks were somewhat weighed down by increased conviction that the Fed would continue to hike interest rates after US inflation indicators exceeded market expectations. However, this was subsequently offset by positives such as rising expectations that the pace of US rate hikes would ease on the back of weaker-than-expected macroeconomic indicators, including the Manufacturing PMI from the US Institute for Supply Management (ISM). Japanese equities were also supported by expectations for strong earnings at domestic exporters as the yen continued to depreciate against the dollar.

Of the 33 Tokyo Stock Exchange sectors, 29 sectors rose with Rubber Products, Mining, and Marine Transportation among the most significant gainers. In contrast, 4 sectors declined, including Pulp & Paper; Foods; and Fishery, Agriculture & Forestry. 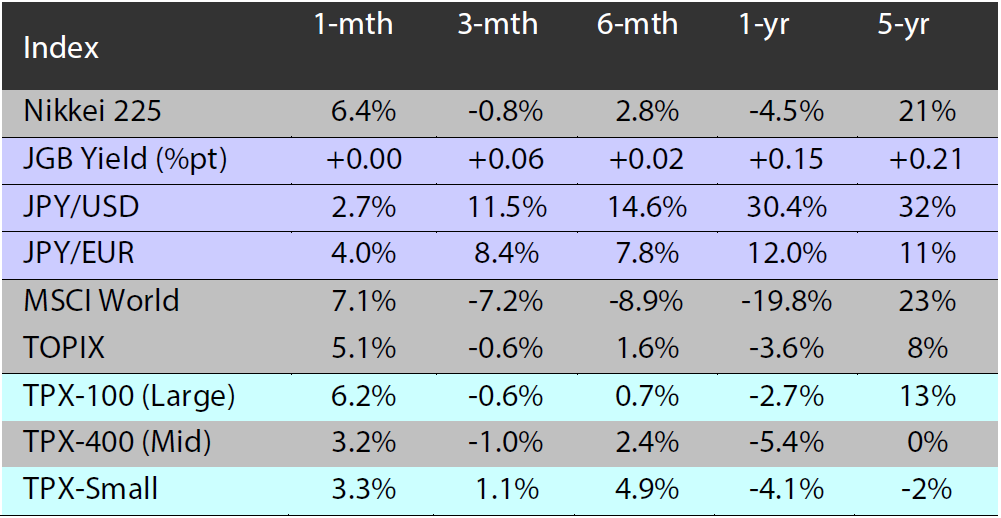 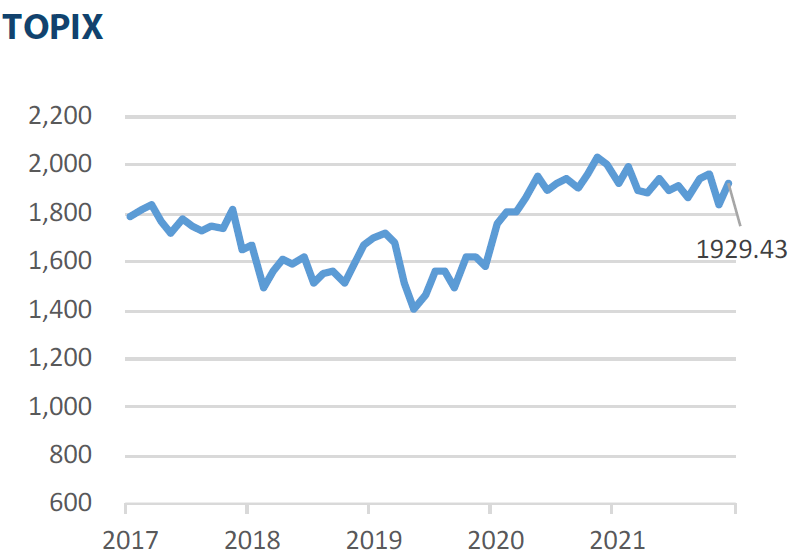 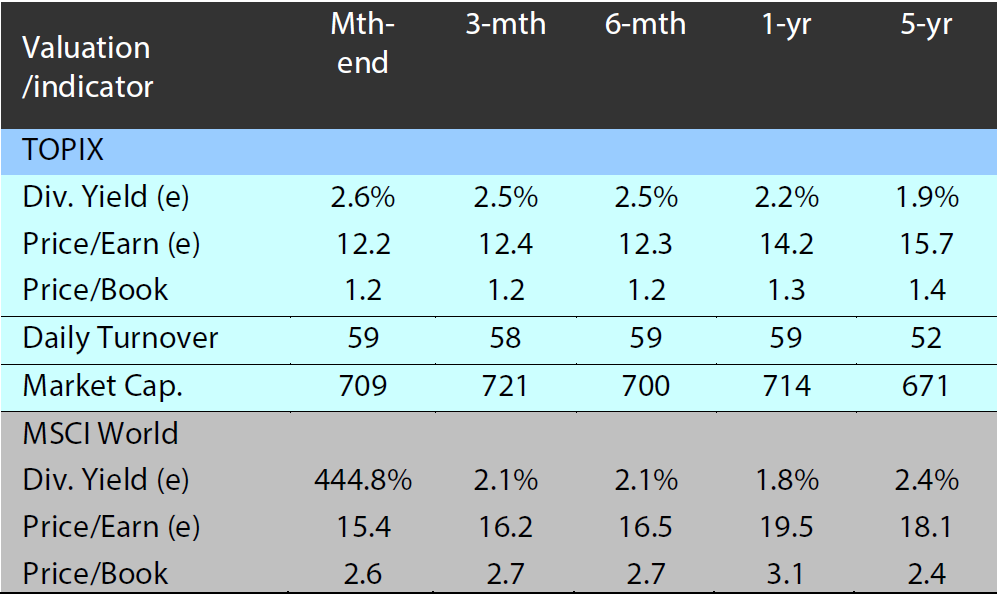 (e) stands for consensus estimates by Bloomberg. Turnover and market cap in JPY trillion. Source: Bloomberg, as at 31 October 2022 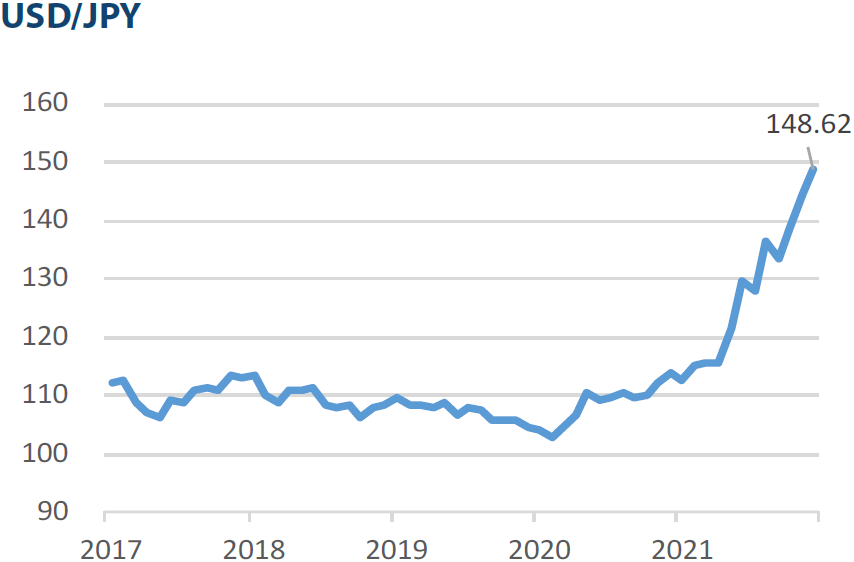