In isolation: Why the BOJ sticks to easing when its peers embark on policy tightening

Despite growing expectations to alter course, the BOJ may not follow its peers any time soon
By sticking steadfastly to its easy monetary policy, the Bank of Japan (BOJ) looks increasingly isolated as other central banks have swiftly embraced monetary tightening to combat inflation. The BOJ has come under pressure at home to revise its policy stance and address the steady depreciation of the yen, now seen by many as a detriment rather than a blessing for the Japanese economy. Both domestic and foreign observers are also increasingly questioning the BOJ’s adherence to its ultra-loose policy when inflation, not deflation, is now the chief global concern. Some market participants are reportedly betting that the BOJ will cave to pressure and loosen its yield curve control (YCC) scheme, through which it caps the long-term government bond yield at 0.25%.

Despite such expectations, we believe that the BOJ is unlikely to follow other central banks any time soon. This is because while Japan has also been gripped by inflation, the phenomenon has yet to become as deep-rooted as in other parts of the world. Utility bills and the price of gasoline have indeed risen in Japan, but the increase has not been as extreme compared to other developed economies. More importantly, Japanese consumers tend to reduce consumption when utility and gasoline prices increase. Consumers are expected to cut their spending on discretionary items if they have to keep paying more for utilities and gasoline, a development which could eventually cap inflationary pressure. This is one reason why the BOJ is not in a hurry to adjust monetary policy.

Regarding the yen, it may not be to anyone’s benefit if the BOJ decides to arrest the currency’s depreciation by raising interest rates. The widening gap between US and Japanese interest rates is the immediate reason behind the yen’s weakening vs. the dollar. However, a more fundamental, long-term driver of yen weakness is the two-decade lull in Japanese productivity, which is only beginning to show signs of recovery. The BOJ may only worsen the economy if it tries to reverse yen weakness by hiking rates and it could end up weakening the currency even more in the long term. As such, the central bank will not counter yen weakness by raising rates, in our view.

The implications of recent political developments in Japan
On 8 July, former Japanese prime minister Shinzo Abe was fatally shot while giving a campaign speech ahead of the 10 July upper house election. We offer our condolences in the wake of this tragic event. For now, it appears that the shooting was unrelated to political workings; as such, Abe’s death is not likely to have a large impact on politics and economic policy. After Abe gave his endorsement to current prime minister Fumio Kishida becoming the leader of the ruling Liberal Democratic Party (LDP), he helped close ally Sanae Takaichi become the LDP’s Policy Research Council chairperson, a key party role, in order to keep Abenomics policies intact. While this is not one of the most likely scenarios, supporters of fiscal austerity could obtain a stronger hand following the reshuffle of the LDP and the Cabinet expected to take place after the upper house election, which the LDP won comfortably. Under such circumstances the BOJ could have an even more difficult time normalising monetary policy.

In some positive signs for the Japanese economy, domestic firms are poised to significantly increase capital spending ahead of an expected recovery in consumption, as the economy emerges from the pandemic. According to a survey by the Ministry of Finance and the Cabinet Office, capital spending by Japanese companies in the current fiscal year through March 2023 is set to surge 16%, a record high. In addition to recovering consumption, the robust capex plans can also be explained by strong Japanese exports—especially to the US, where steady consumption has increased demand for imports. In terms of quantity Japanese exports have surpassed the peak seen just prior to the GFC, and domestic manufacturers have reached a phase in which they can respond to increased sales by boosting capex in earnest. In addition to demand from abroad, Japanese companies can also hope to tap domestic pent-up demand as consumption hurt by the pandemic begins to recover, workers return to offices and the flow of people increases.

Japan was in a long period of stagnation after the bursting of the dot-com bubble at the beginning of the century followed by the GFC a few years later. But capex in Japan appears to be reaching its strongest level in two decades. If US demand for Japanese exports remains steady, bringing long-idling facilities into full capacity will not be enough—the largest amount of capex in 20 years is likely to be needed. It is worth pointing out that the ongoing capex increase is driven purely by the need to produce more quantity and not by a weaker yen, which until recently was generally considered positive for export-oriented manufacturers. A weak yen may boost profits in yen terms, but that alone would not be a reason for firms to increase capex.

Japanese equities ended June lower with the TOPIX (w/dividends) down 2.05% on-month and the Nikkei 225 (w/dividends) falling 3.06%. Expectations for a recovery in exporters’ earnings partially boosted shares as the yen weakened, but equities were dragged down by unease over a global economic slowdown. These concerns were fuelled by views that the Federal Reserve (Fed) will accelerate monetary tightening. Of the 33 Tokyo Stock Exchange sectors, 15 sectors rose with Electric Power & Gas; Fishery, Agriculture & Forestry; and Textiles & Apparels among the most significant gainers. In contrast, 18 sectors declined, including Marine Transportation, Mining, and Iron & Steel. 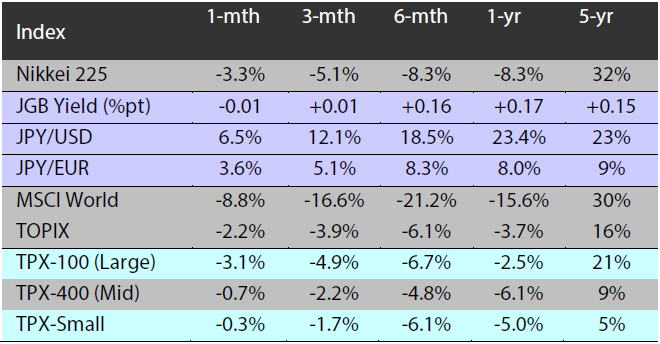 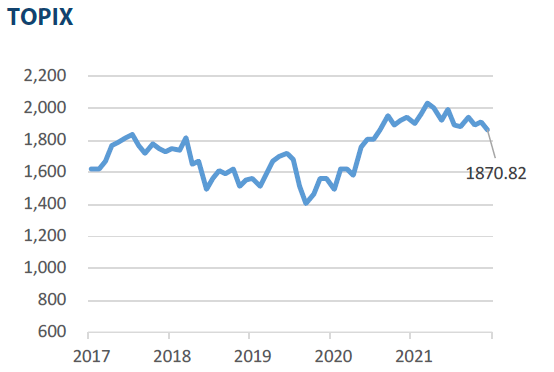 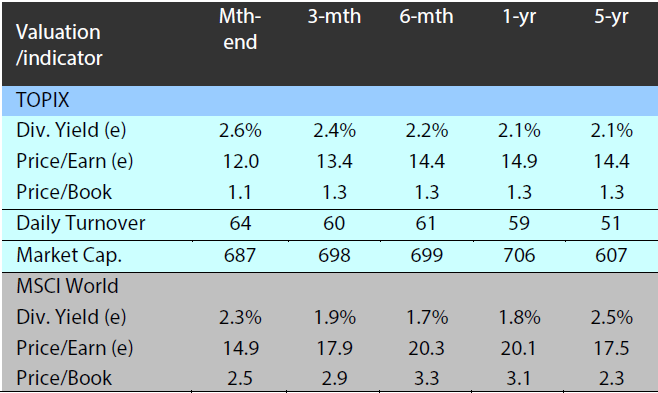 (e) stands for consensus estimates by Bloomberg. Turnover and market cap in JPY trillion. Source: Bloomberg, as at 30 June 2022 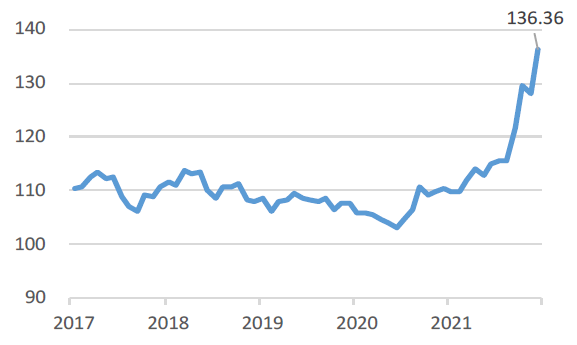