The Bank of Japan (BOJ) monetary policy meeting in January attracted more attention than usual after a media report led to speculation among market participants that the central bank could consider hiking interest rates amid rising prices. While BOJ Governor Haruhiko Kuroda pushed back against such speculation, saying that “raising rates is unthinkable”, conjecture among foreign market participants about BOJ rate increases could yet gather momentum once the Federal Reserve (Fed) and other central banks begin hiking rates. However, domestic market participants are unlikely to share such views regarding BOJ policy, at least through the first half of 2022. While prices of various goods are beginning to rise in Japan, unlike in the US, the demand-pull aspect of inflation is still absent. The fiscal stimulus packages Japan formed at the onset of the pandemic were modest relative to those of the US, which compiled generous measures that lined consumer pockets. Furthermore, inflationary pressure generated by higher energy prices and rising cost of imports due to a weaker yen have the effect of curbing Japan’s consumer spending, which could become a factor to cap inflationary pressure in the longer run.

We therefore believe that policy tightening will not become part of the BOJ agenda anytime soon. Japan’s inflation rate will have to enter a clear uptrend for the central bank to turn away from its penchant for enhancing its easy policy. Given the BOJ’s failure after many years to lift inflation by controlling the money supply, and the inability so far of the fiscal stimulus compiled by Prime Minister Fumio Kishida’s administration to boost prices, we will likely need to see improvement in Japan’s labour productivity before the central bank can pivot away from easing.

Recently released data have underlined the strength of Japanese exports during the pandemic. According to government data, Japan’s exports rose 21.5% in 2021 to JPY 83.09 trillion; yen-denominated exports in December 2021 hit a record-high JPY 7,881 billion. The increase in exports can be attributed ultimately to demand from the US, where a surge in retail sales is fuelling demand for imported goods, including those from Japan. US demand could slow somewhat in 2022 but it is still expected to remain at a high level. We therefore expect exports to continue leading the Japanese economy through 2022. The further easing of semiconductor shortages should also boost exports, as such shortages served as a weight on exports in the first half of 2021.

Indeed, a noticeable trend in Japan’s trade data is the increase in semiconductor-related exports, which reached JPY 4.47 trillion in the second half of 2021, almost matching the JPY 4.53 trillion of passenger cars. However, before concluding that Japan’s is poised to make a comeback as a global semiconductor powerhouse, we need to remember that the world of semiconductors is varied and diverse, ranging from leading high-end chips to those that have already commoditised. Japan’s exports of easy-to-produce commoditised chips may have increased recently, but that does not change the fact that the country remains unattractive as a semiconductor hub. It will have to establish itself as a producer of high-spec chips to regain its dominant position in the sector, and this may depend on how much R&D corporate Japan is willing to undertake. There are positive signs, however. For example, a major Japanese manufacturer of electronics has recently decided to make a foray into EVs. Such an undertaking will hopefully form the nucleus of a renewed R&D drive towards producing high-spec, globally competitive semiconductors essential for the AI components required in EVs.

The Japanese equity market ended January lower with the TOPIX (w/dividends) down 4.83% on-month and the Nikkei 225 (w/dividends) falling 6.21%. Stocks were buoyed by expectations for economic growth going forward in light of strong corporate earnings results in the US. However, this was more than offset by rising conviction that the US would roll back monetary easing earlier than expected following the release of the US Federal Open Market Committee (FOMC) meeting minutes and increasing concerns regarding the geopolitical risk arising from continued military tensions surrounding Ukraine. Additionally, at the press briefing following the FOMC meeting, Fed Chair Jerome Powell took a hawkish stance toward tightening monetary policy, which further weighed down the Japanese equity market, contributing to the overall decline during the month.

Of the 33 Tokyo Stock Exchange sectors, 12 sectors rose with Mining, Insurance, and Nonferrous Metals among the most significant gainers. In contrast, 21 sectors declined, including Electric Appliances, Services, and Precision Instruments. 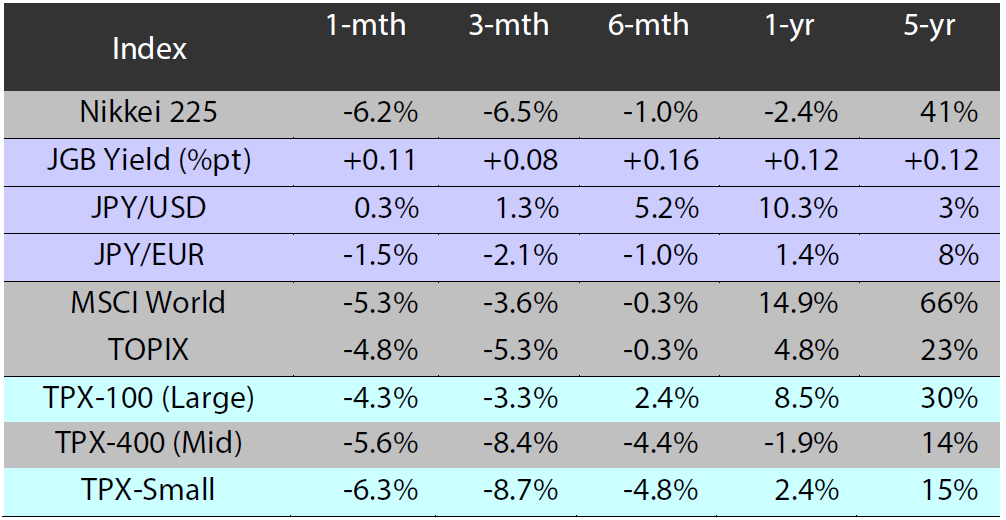 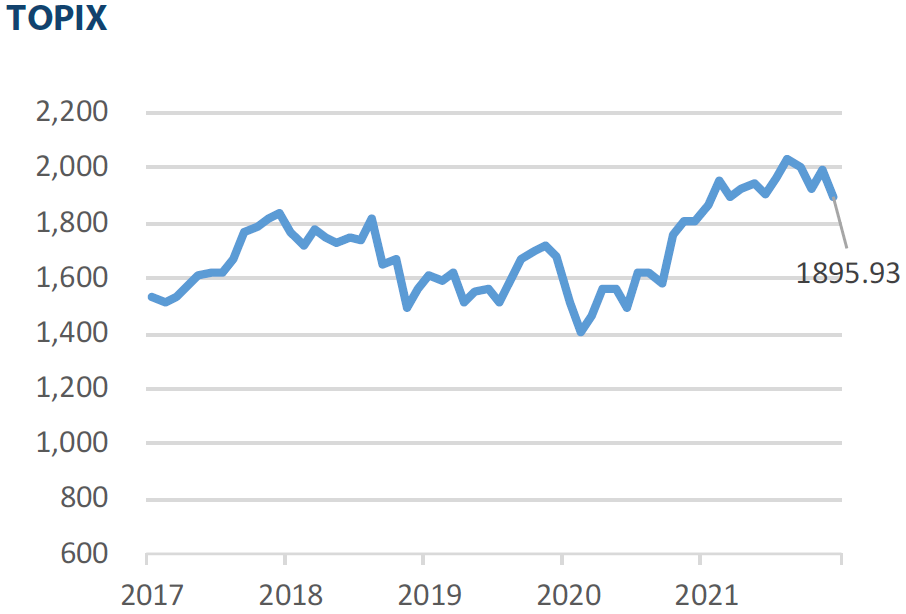 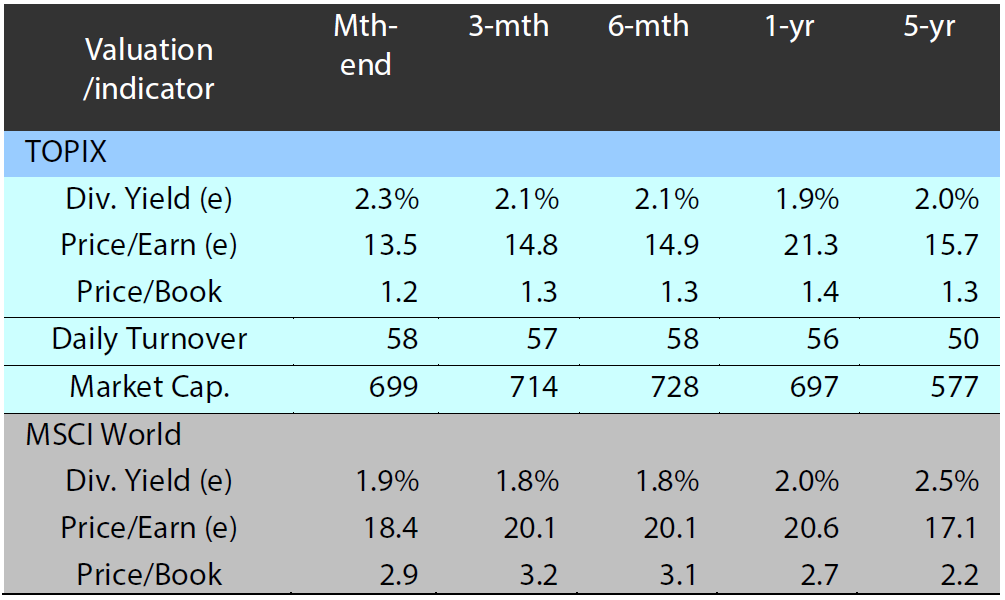 (e) stands for consensus estimates by Bloomberg. Turnover and market cap in JPY trillion. Source: Bloomberg, as at 31 January 2022 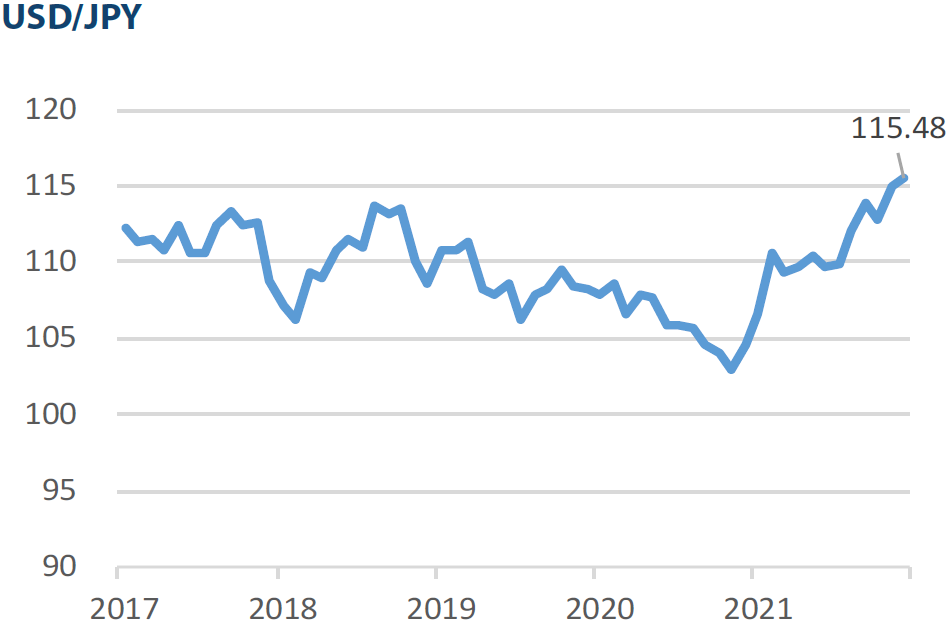