The past year has been a difficult one for global equity markets, with major indices on track to end 2022 on losses. Although its equity market has fared better than its peers in the US and Europe, Japan is no exception. As of this writing the Nikkei Stock Average was down 5.8% year-to-date (YTD) while the Dow Jones Industrial Average (-8%), the S&P 500 (-17%) and Germany’s DAX (-11%) were headed for deeper losses. In our view the better performance by Japanese stocks can be mainly attributed to two factors: steady exports and demand created by the revival of inbound tourism. It is difficult to predict whether Japanese stocks can continue to outperform US and European equities in 2023. But we can say with confidence that Japanese stocks should remain well supported in the months ahead.

Japanese exports slightly over a year ago surpassed the peak seen immediately prior to the Global Financial Crisis (GFC) in quantity terms and have remained robust since, according to the Bank of Japan’s real export data. The strength of Japan’s exports is due in large part to steady demand from the US. Even if US growth slows, sufficient demand from the world’s largest economy is likely to continue supporting Japanese exports. Export-linked companies such as manufacturers are therefore positioned to boost capex to produce goods that Japan sells abroad. Deflationary pressures, which have gripped Japan since the aftermath of the GFC, are showing signs of dissipating as export-linked sectors hire more workers and raise wages, in turn lifting consumption and stimulating other sectors such as construction. Rising consumption is coinciding with the economy’s post-pandemic normalisation, which has been a boon to businesses in the hospitality and passenger transport industries. As for inbound tourism, the number of visitors to Japan is unlikely to return immediately to pre-pandemic levels due to the absence of Chinese tourists. Nevertheless, demand generated by inbound tourism is expected to provide steady support to the economic boost from exports, the main engine of recovery.

Perhaps the biggest risk to a scenario in which Japanese equities continue to outperform their developed market counterparts is a possible drop in exports, which could take place if the US and European economies were to contract significantly in 2023. Some may also see domestic politics as a concern with public support for Japanese Prime Minister Fumio Kishida declining steadily. While Kishida may find it difficult to embark on new policies amid sagging support, his administration has already set in motion a number of spending plans, which are likely to continue stimulating the economy. Domestic politics, therefore, may not pose as large of a risk as some fear.

Looking beyond the dip in Japan’s 3Q GDP

Recently released data showed that Japan’s economy shrank in the third quarter, catching some observers by surprise. According to revised data released on 8 December, the Japanese economy, in annualised quarterly terms, contracted 0.8% in 3Q. Even though the decline follows relatively firm growth in 2Q, it is unlikely to stir the markets. The markets, in fact, appear to be more focused on when the economy will overcome the dip in 3Q and resume growing. The general market view is that the 3Q contraction could be largely attributed to an increase in import costs—a combination of high commodity prices and the yen’s weakening to historic lows versus the dollar. The cost of imports is unlikely to remain elevated as the recent surge in prices of commodities has shown signs of abating, with the drop in crude oil being an example. Furthermore, the weakening of the yen, which increased the costs associated with imports, has also started to reverse. With US inflation possibly peaking towards the spring of 2023, the dollar may lose the dominance it had against the yen through much of 2022.

Other factors also favour Japan’s economy in the coming months. As we mentioned above, the economy is expected to gain support from a revival in domestic demand on top of already robust exports. Unless Japan suffers from another big wave of COVID-19 infections, the recovery in domestic demand is seen continuing into 2023. The economy could benefit further should the Federal Reserve slow the pace of its rate hikes and allow the yen to regain more ground against the dollar.

The Japanese equity market rose in November, with the TOPIX (w/dividends) up 2.95% on-month and the Nikkei 225 (with dividends) gaining 1.41%. As the yen appreciated against the US dollar, receding expectations regarding exporters’ corporate earnings weighed down the market to an extent. However, Japanese equities rallied overall, influenced by a rise in US equities on the back of lower-than-expected growth in the US Consumer Price Index (CPI), which prompted expectations that the Federal Reserve would slow the pace of its rate hikes. Stocks were also boosted by retreating concerns regarding US monetary tightening following remarks made at the US Federal Open Market Committee (FOMC) meeting suggesting a deceleration of rate hikes. 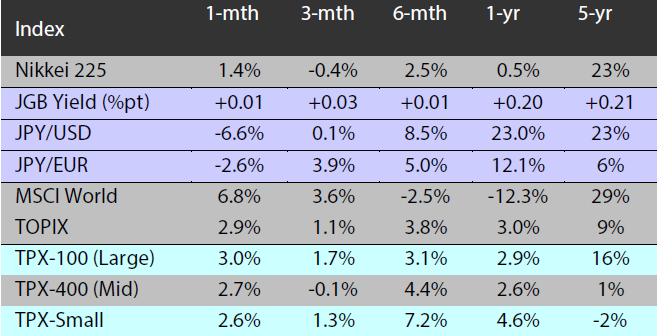 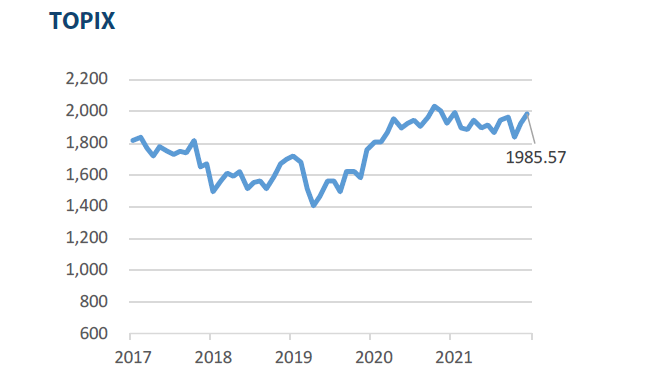 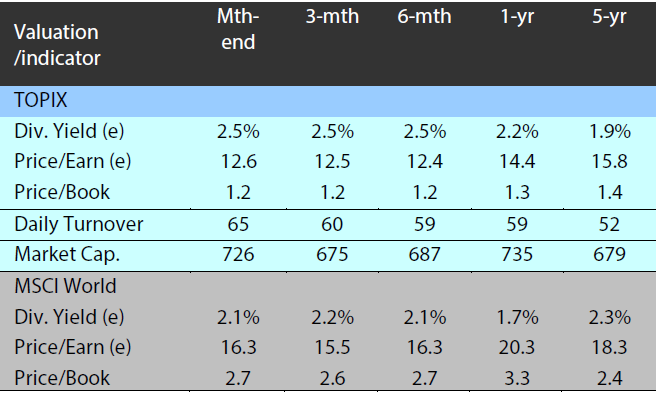 (e) stands for consensus estimates by Bloomberg. Turnover and market cap in JPY trillion. Source: Bloomberg, as at 30 November 2022 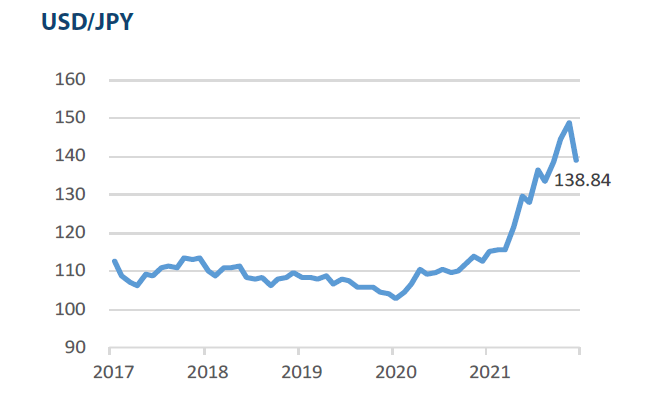