A look at Abenomics without Abe

The assassination of former Japanese prime minister Shinzo Abe in July had a profound impact across Japan. From an economic and financial market perspective, perhaps the biggest question is where Abenomics is now headed without Abe, who retained much political clout even after he resigned as prime minister in 2020. In the very short term, the legacy of Abenomics may remain intact, as the policies’ main pillars, known as the “three arrows” consisting of monetary easing, fiscal policy and growth strategy, will be retained by the government of current prime minister Fumio Kishida for the fiscal year through March 2023. This is demonstrated by the government’s annual economic guidelines which show that it intends to (1) continue to ask the Bank of Japan (BOJ) to keep monetary policy easy, (2) retain an expansionary fiscal policy and (3) pursue growth through structural reform (though Kishida’s growth plan slightly differs from Abe’s).

Long-term prospects for Abenomics still remain unclear. A reshuffle of the cabinet and the Liberal Democratic Party (LDP) leadership expected as early as end-August could still provide a hint. It will be worth focusing on changes to the position of Sanae Takaichi, the LDP’s Policy Research Council chairperson. Takaichi was an Abe ally and a self-proclaimed successor of Abenomics. Whether she can retain a key party post may provide a crucial clue about Kishida’s dedication to Abenomics in the long term. Even if Kishida sticks with the policies, Japan’s growth story could change slightly. Abe tried to achieve growth through deregulation, but Kishida may opt to link fiscal stimulus to innovation, turning the focus away from the easing of regulations. From an investment perspective, Kishida’s emphasis on linking fiscal spending with growth, focusing on areas like AI, could favour some sectors over others, although the overall impact on the broader market and the economy is unlikely to differ too much from the Abe era.

If Kishida decides to distance himself from Abenomics—which would become apparent if Takaichi’s position within the LDP is diminished—the biggest risk from a market perspective would be the government steering away from expansionary fiscal policy due to the fact that many of Kishida’s allies are proponents of fiscal discipline. One potential policy advocated by such proponents is to raise the capital gains tax, although the government would be limited to a modest increase as it also aims to encourage citizens to shift their savings into investments. Another focal point in the wake of Abe’s death is monetary policy. Current BOJ Governor Haruhiko Kuroda’s term expires in April 2023 and the Kishida cabinet will appoint a successor subject to parliamentary consent. While a BOJ governor favouring the continuation of easy monetary policy was preferred during the Abenomics era, Kishida may appoint a governor who favours policy normalisation. Kishida drifting away from Abenomics should not have a big impact on the economy and market, but it could still cloud investor sentiment by casting Kishida as an enigma. As such, how the cabinet and LDP leadership reshuffle pan out will be of keen interest to the markets.

Recent data and polls suggest that an increasing number of Japanese companies are passing on higher costs—which many blame on a result of a rise in commodity prices and a weaker yen—to consumers. This represents a significant shift, as Japanese companies, long stuck in a deflationary spiral, were initially hesitant at the outset of the recent inflation to transfer these costs to consumers. While some may conclude that Japanese companies setting aside long-held expectations that they would refrain from passing on higher costs represents a full-fledged path out of deflation, the phenomenon could turn out to be short-lived. This is because inflation in Japan could yet prove to be transitory. Japanese consumers are currently still purchasing discretionary items at higher prices, but such a trend could fizzle out and weaken inflationary pressure once consumers fully comprehend the relationship between their earnings and inflation. Moreover, consumer spending in Japan could be less sustainable than that in countries such as the US as the Japanese government did not provide as much monetary assistance to individuals as the US following the outbreak of COVID-19.

There are, however, some positive signs. For example, bonus payments have increased this year, as earnings by many Japanese companies have increased significantly thanks to strong exports. These increases in one-time income have allowed a number of consumers to maintain pace with inflation for now, in turn allowing companies to pass on higher costs. Wages will likely be key to whether companies can keep passing on higher costs in the longer term. Wages increased noticeably in the spring, when businesses and workers traditionally hold wage negotiations. Whether this trend will continue may depend largely on Japan’s exports maintaining their current strength. Right now, any signs of strength ascribed to the Japanese economy is mostly confined to the recovery-from-the-pandemic narrative. A sustained rise in wages could help the economy enter a more long-term growth trajectory and dislodge Japan from deflation, although such a scenario remains a tentative one at this stage.

Japanese equities ended July higher with the TOPIX (w/dividends) up 3.72% on-month and the Nikkei 225 (w/dividends) rising 5.35%. Although concerns of a slowdown in the US economy weighed on equities, the overall rise can be attributed to factors including expectations for policy continuity following the upper house election win by the LDP, rise in US equities and the BOJ’s decision to maintain monetary easing. Of the 33 Tokyo Stock Exchange sectors, 28 rose with Marine Transportation, Services, and Precision Instruments among the most significant gainers. In contrast, 5 sectors declined, including Insurance, Electric Power & Gas, and Air Transportation. 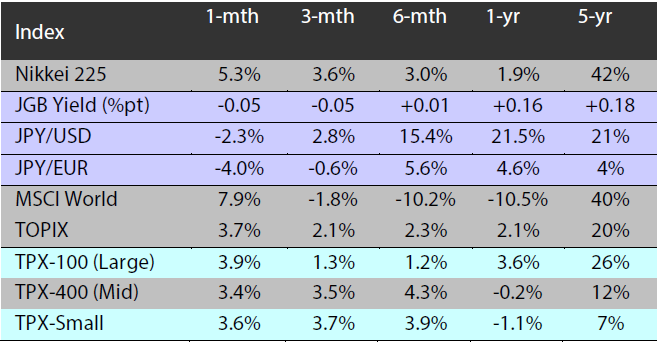 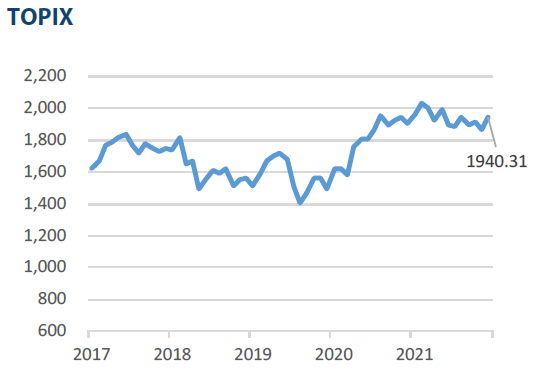 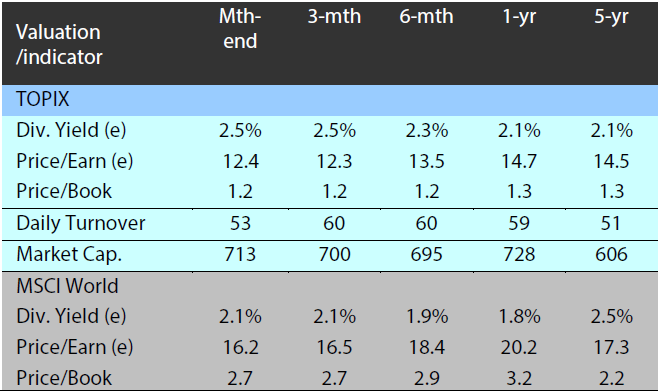 (e) stands for consensus estimates by Bloomberg. Turnover and market cap in JPY trillion. Source: Bloomberg, as at 29 July 2022 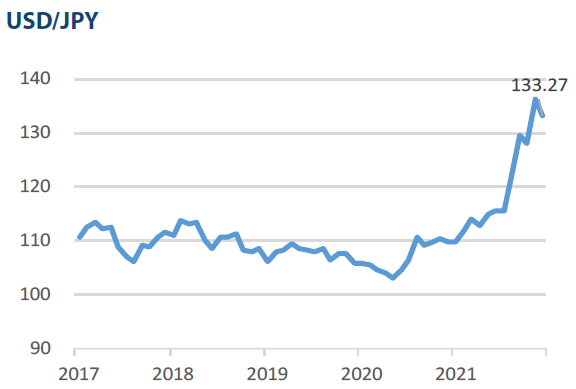