Despite fearmongering on demographics, Japan’s business has soared

Pundits need to be careful about scaring people regarding Japan and, thus, harming its economic future. This is especially true regarding recent high profile, wildly exaggerated tweets about demographics, a decades-old theme; clearly, this is a challenging theme, but Japan is certainly not going to disappear. Under the Japanese government’s base scenario, the population is projected to decline from 125 million in 2020 to 89 million in 2065. There is plenty of time until then for trends to improve, but even if they don’t, that population level likely would still rank as one of the larger national populations in the world, especially as other countries, including Spain, South Korea, Italy and others, have lower fertility rates than Japan and as major production countries, such as Germany and China, face tremendous demographic cliffs ahead.

Indeed, Japan has already experienced an 8.5% decline in its prime-age workforce from 2001 to 2021, but Japan remains a good place to invest in factories or in its equity market. Indeed, recurring corporate profits have more than tripled over this period due to improved corporate governance, technology advancements, productivity improvements and the expanded labour utility of its population.

Secular bull market in profitability not impacted by demographics 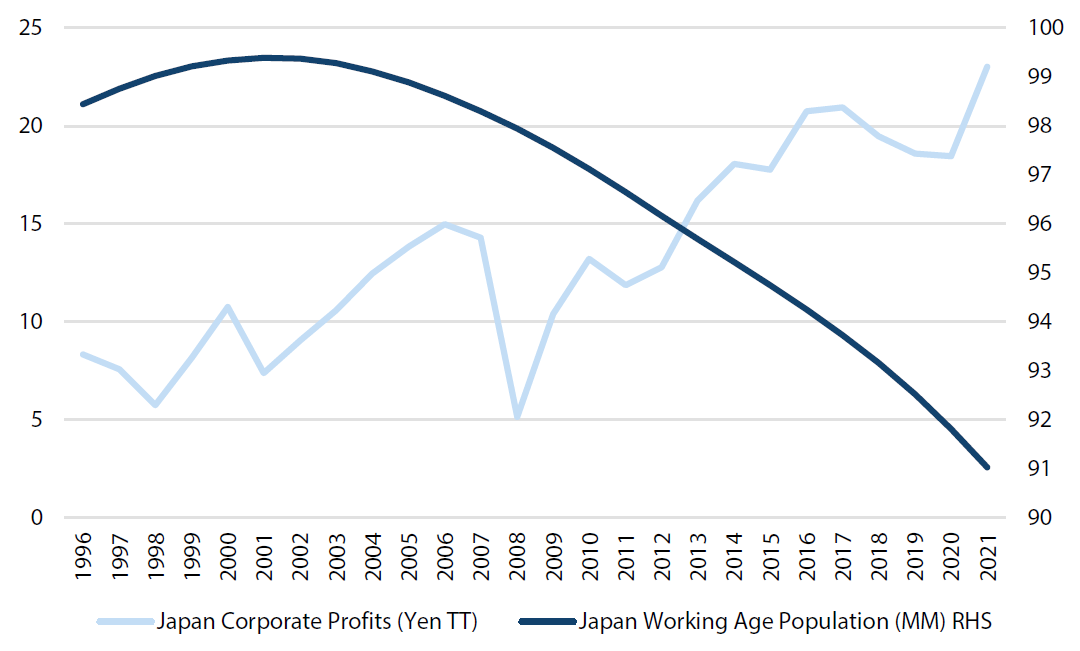 Of course, global economic growth has also generated profits for many Japanese companies and should continue to do so. Moreover, fears should be assuaged by the fact that Japan’s surge in profits came despite rather meagre domestic GDP growth during this period, which indeed was greatly due to demographics. In any event, Japan has shown that it is a good place to do business, and hopefully will be even more so if some governmental improvements are made.

One cannot force people in Japan to have children, and excessively paying them to have children might give the wrong incentive to some people and, thus, harm the quality of child-rearing. However, it is clearly true that in some respects, it costs too much to live in Japan compared to the rather meagre wages offered, even when considering low-cost education through college and very reasonably priced quality health care. Low wages could be raised through singling-out notably miserly corporations via the government’s “bully-pulpit”, but the government should also study which household products cost too much in Japan compared to other developed countries and ensure that there is not too much oligopolistic pricing. Ways to reduce house costs and rents would be greatly helpful too, because that is nearly every household’s largest expenditure. Success in encouraging new businesses and inbound tourism is clearly crucial too.

However, even assuming improved living cost standards, some people just do not want to have children, even in a safe and politically stable country like Japan. Nonetheless, a lower population will not stop the country from prospering, especially as the efficiency of automation and digitalisation become more diffused. In this case, automation should replace the natural decline in the labour force. Perhaps some clever person has calculated the human-equivalent number of automation processes and added them back into the demographic trend to reveal what likely is a much more thriving profile.

In sum, the facts show that global business leaders and investors should not let hyperbole about demographics dissuade them from investing in Japan.