Views on Japan’s election, correlation between stocks and yen

Japan’s ruling Liberal Democratic Party (LDP) and its coalition partner Komeito comfortably won the lower house election on 31 October, taking 293 of the 465 seats in contention and gaining an “absolute stable majority”. It was a major victory for Prime Minister Fumio Kishida, who had just taken office at the beginning of October and needed a convincing win to solidify his political foothold. As the coalition had been expected to struggle at the polls, the win was greeted with relief by the market, helping ease concerns foreign investors may have held towards Japanese equities prior to the election. An absolute lower house stable majority gives the coalition control of the 17 standing committees and grants it the committee chairperson posts, permitting it to move legislation through committees in case of a tie vote. This means Kishida can pursue his policies with minimum interruption; in addition, many aspects of Abenomics will likely be left intact.

Of immediate interest to the market is how Kishida can shore up Japan’s medical capabilities, an area where the previous administration under Prime Minister Suga fell short. The medical system was nearly overwhelmed at the height of the pandemic even though Japan’s coronavirus cases in proportion to the population were low compared with those of other developed economies. Enhancing PCR testing, in addition to establishing field hospitals and mobilising medical personnel during emergencies are some of the measures Kishida is expected to pursue. Such measures are seen as crucial towards further re-opening the economy, allowing the country to better handle future coronavirus waves.

Another area of interest is the supplementary budget Kishida aims to compile. The supplementary budget is expected to fund measures such as cash handouts for people hit by the pandemic. Household spending stemming from such handouts is unlikely to boost GDP, but it could nudge the economy towards recovery as it did in the US. Not all of Kishida’s agenda will be market friendly. He did water down his proposal to raise the capital gains tax rate, but he appears to be sticking to his pledge to relax rules that currently require to companies to disclose earnings reports every quarter, which, if realised, could potentially mean less information for investors as some companies may opt out of quarterly reporting. That said, the European Union ended obligatory quarterly financial reporting but many companies continue to release earnings reports every quarter, and this could provide potential hints towards how the issue could be handled in Japan.

Why is a weaker yen no longer as supportive for Japan equities?

Recent market movements suggest that a weaker yen is no longer as supportive for Japanese equities as it once was. The Japanese currency has weakened steadily this year against the dollar amid expectations that US and Japanese monetary policies will diverge; in October, it fell to a four-year low, nearly touching 115 yen to the dollar. However, the yen’s decline has had a limited impact on equities, with the Nikkei Stock Average moving sideways or even falling during bouts of yen weakness. Before we explore why the weak yen is no longer as supportive for equities, we need to go back to the early years of Abenomics. The Nikkei was at around 9,000 when the Abe administration’s economic policies started late in 2012. The index’s rise towards 20,000 three years later can be attributed almost entirely to a weaker yen, which sank on the Bank of Japan’s aggressive monetary easing. At the time, Japanese companies did not have to do much to improve earnings; exporters’ earnings were automatically boosted by the weak yen and the broader equity market rose in turn. A weak yen came to be strongly associated with rising equities.

What escapes many, however, is that currency levels had less of a fundamental impact during the next market phase, which saw the Nikkei reach 24,000 in 2018. By this time Japanese exports had increased significantly. It was no longer the price effect of a weaker yen that was helping exporters, but they were instead benefitting from the sheer increase in export quantities. Currently, fiscal stimulus measures in countries re-opening from the pandemic like the US and the resulting surge in demand for Japanese goods is more important for exporters’ bottom line than foreign exchange rates.

When the yen weakens significantly, the negative effects of the phenomenon, such as the higher cost of importing goods like crude oil, are often highlighted. The logic behind such views is that higher prices of imports will negatively affect the economy recovering from the pandemic. However, we need to remember that Japan exports more than it imports. This means that a weak yen will only become a serious issue if demand for Japanese goods drops so much that the country ceases to be a net exporter but still needs to continue importing some basic goods.

Japanese equities ended October lower with the TOPIX (w/dividends) down 1.42% on-month and the Nikkei 225 (w/dividends) down 1.89%. The market was initially weighed down by US debt ceiling concerns as well as worries about a slowdown in the Chinese economy. Mid to late month, share prices were negatively affected by inflation concerns. The market trimmed some losses on continually declining COVID-19 cases and a weakening yen, although these factors were unable to prevent the market from declining overall in October. Of the 33 Tokyo Stock Exchange sectors, 10 gained, with Mining, Nonferrous Metals, and Glass & Ceramics Products posting the strongest gains. In contrast, 23 sectors declined, including Air Transportation, Electric Power & Gas, and Land Transportation. 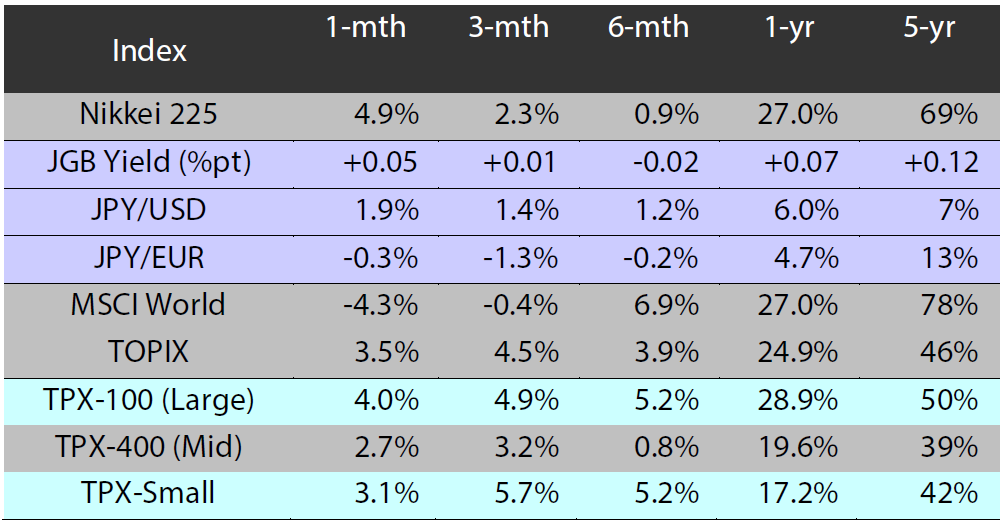 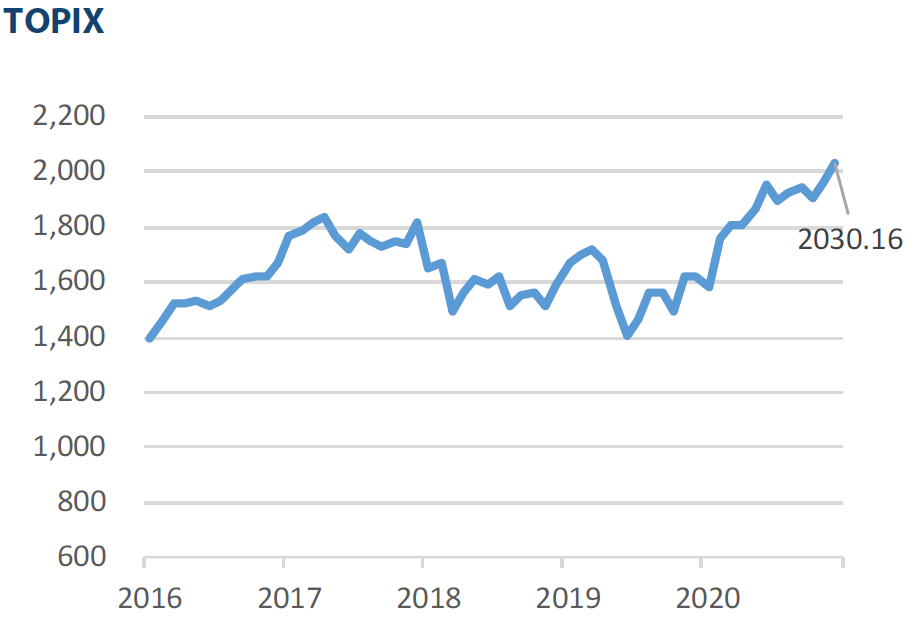 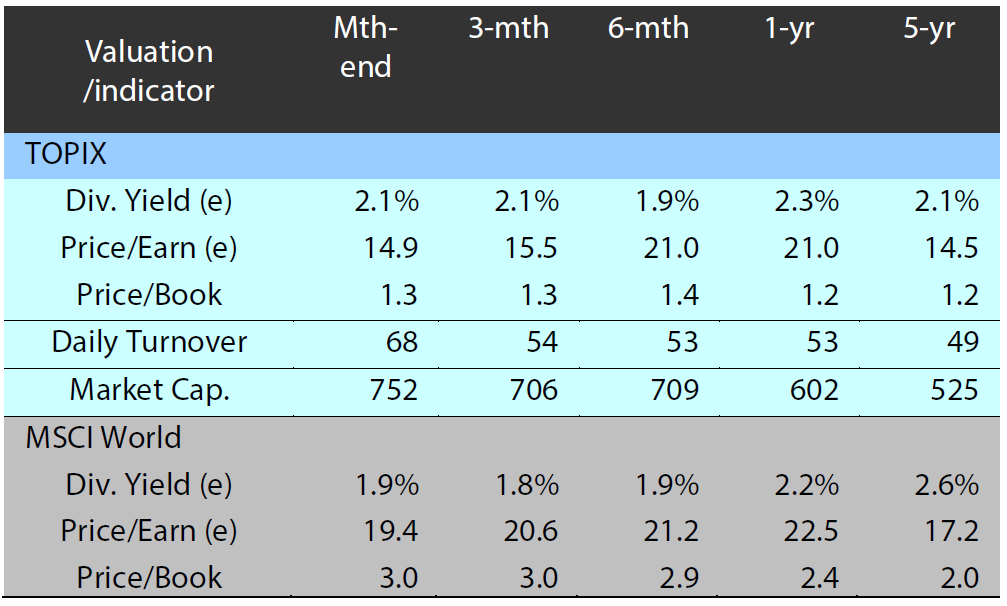 (e) stands for consensus estimates by Bloomberg. Turnover and market cap in JPY trillion. Source: Bloomberg, as at 29 October 2021 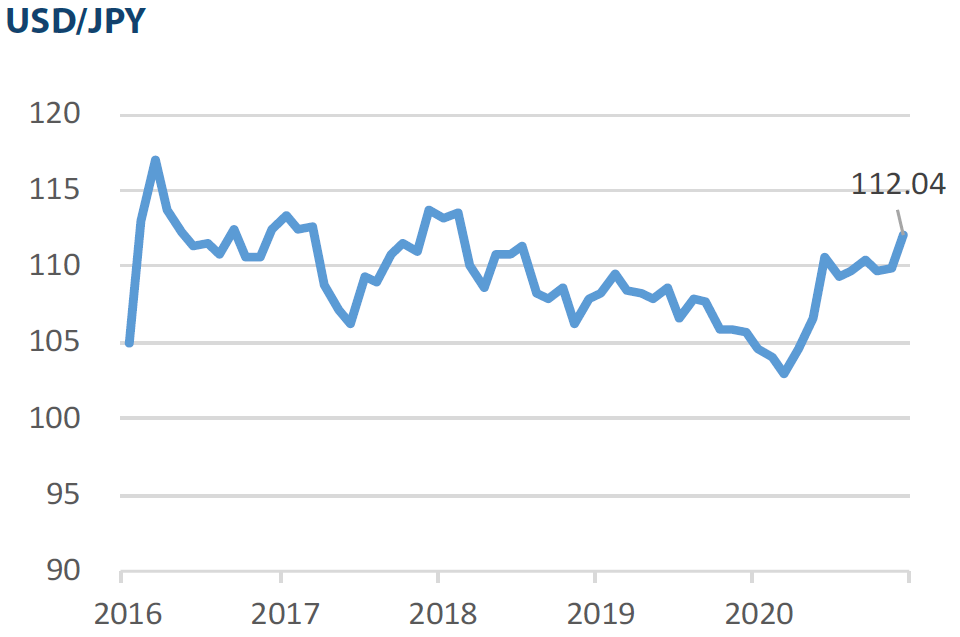