We provide our view on the Bank of Japan’s latest policy review, under which the central bank decided to allow long-term rates to fluctuate in a wider band and removed its annual target for ETF purchases. We also assess the barring of foreign spectators from the Olympic games.

Following a review of its policy at the March board meeting, the Bank of Japan (BOJ) decided to allow long-term interest rates to fluctuate in a wider band and created a scheme that pays interest to financial institutions that access its loan programme. The central bank also scrapped its JPY 6-trillion annual target for exchange traded fund (ETF) buys while retaining its JPY 12-trillion purchase ceiling. It also clarified that it will only purchase TOPIX-tracking ETFs and no longer buy those that track the Nikkei.

The BOJ was widely expected not to retain its commitment to quantitative easing and therefore the latest policy review came as no surprise to the markets, which interpreted the latest changes as the central bank fine-tuning its policy to make it more sustainable. The markets had already been expecting the BOJ to allow long-term interest rates to fluctuate in a wider band as a steepening of the yield curve driven by inflation expectations would enhance the profitability of banks. Furthermore, a wider band for long-term interest rates enables the BOJ to take short-term rates deeper below 0% if necessary. The BOJ’s negative interest rate policy was seen as a factor hurting the bottom line of banks but allowing more headroom for long-term rates makes it easier for the central bank to further lower short-term rates when needed.

The BOJ removing its JPY 6-trillion annual target for ETF purchases was not a surprise, although its decision to cease buying Nikkei-linked ETFs did catch the markets off guard. The markets reacted briefly to the BOJ’s decision, but the decision was not interpreted by market participants as policy tapering. Rather, the markets were directly responding to the decision itself, in our view.

The Olympics and Paralympics will be held as scheduled in Tokyo this summer but Japan opted to ban foreign spectators amid concerns than an influx of visitors from overseas could undermine public health during a pandemic. In terms of finances, the move is likely to make a difficult situation even tougher as the organisers are also expected to limit the number of domestic spectators allowed at the games. The negative economic impact from the reduced number of spectators, both foreign and domestic, will be acutely felt by the airline, services and hospitality sectors.

However, the barring of foreign spectators will have a limited impact from a broader economic perspective. The recovery of exports deserves particular attention; according to Bank of Japan data, Japan’s real exports are back at levels just prior to the outbreak of the pandemic, thanks in part to US demand for imports which is also recovering strongly. Japan’s robust exports can fill some of the excessive capacity that has been built up over the past few years in anticipation of a surge in inbound tourism accompanying the Olympics.

Domestic tourism is another factor that could partially offset excessive capacity. Domestic tourism actually has a much larger impact on the economy relative to inbound tourism. Domestic tourists may not be able to fully make up for the lack of foreign visitors, but the hospitality and service sectors would be able to enjoy sustained demand over a longer term, instead of a one-off jump in demand generated by foreign visitors followed by withdrawal once the Olympics end. That said, the government will have to bring the spread of the coronavirus under better control and ramp up its vaccination efforts to reap the benefits of domestic tourism.

The Japanese equity market rose in March, with the TOPIX (w/dividends) rising 5.71% on-month and the Nikkei 225 (w/dividends) climbing 1.35%. Although increased uncertainty around the global economic recovery hung over the market as more infectious variants of COVID-19 became more widespread in areas such as Europe, Japanese equities generally moved upward during the month. Stocks were supported by expectations surrounding the US economy after additional stimulus measures were passed and the Fed indicated that it would continue its zero-interest rate policy for the longer term. The continued roll-out of COVID-19 vaccinations also bolstered hopes for a normalization of the economy. Of the 33 Tokyo Stock Exchange sectors, 29 sectors rose, with Marine Transportation, Iron & Steel, and Electric Power & Gas posting the strongest gains. In contrast, only four sectors declined, including Mining, Land Transportation, and Air Transportation. 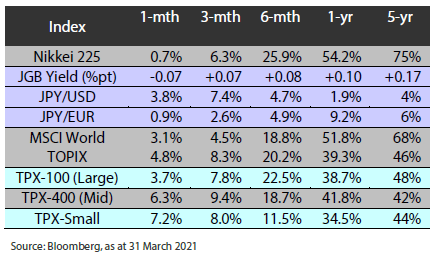 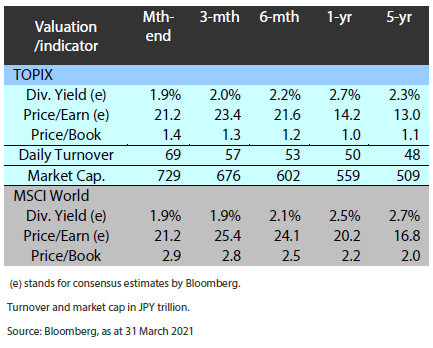 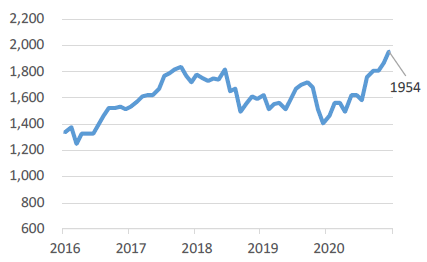 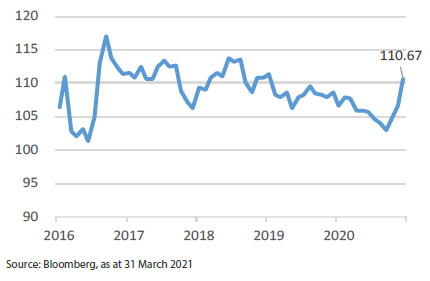