What global inflation could mean for Japan

As the world takes steps to recover from the COVID-19 pandemic, prices have risen quickly in many parts of the globe. It was reported that average annual inflation across OECD countries in April rose to 3.3%, its highest since 2008. It remains to be seen whether inflation will gather pace and become an entrenched global phenomenon. The potential for this is viewed either as a looming threat or something more positive, depending on one’s perspective.

With such clear signs of inflation in other developed countries, it is tempting to think that Japan, which has struggled for years to overcome deflationary pressures, may also be swept up by a wave of rising prices. The chances are, however, that an acceleration in global inflation will not have much of an impact on Japan. The country remained stuck in deflation when prices rose in other countries in the recent past, showing that inflation and deflation are very domestic phenomena determined by whether a surplus (or shortage) of money and goods exists within a certain economy. After the bursting of Japan’s asset bubble in the early 1990s, excessive capacities, including those in real estate, were maintained to keep companies afloat. This in turn made companies hesitant towards taking growth initiatives and enlarged their net cash reserves. The resulting decrease in the turnover of money, in addition to the shift in manufacturing to China, are seen to have prolonged deflation in Japan.

While global price rises may not have much impact on Japan, the country’s path into inflation is likely to resemble those of other countries. The Japanese government, in line with its global peers, recognised the need for strong fiscal stimulus early in the pandemic and the effect of such steps will begin to be felt fully through measures such as “GoTo” travel campaigns once a significant portion of the population is vaccinated. Consumers, content to save money during the pandemic, are likely to start spending in earnest at this stage, in turn increasing corporate cash flow. Companies can then use their profits to engage in growth capex instead of just maintenance capex, creating a virtuous economic cycle. The seeds of inflation therefore already exist in Japan, regardless of global inflation trends. The key is whether the country’s long untapped savings can be diverted as “risk money” and allowed to fuel the aforementioned corporate growth capex.

The Bank of Japan (BOJ) caused a stir at its June monetary policy meeting by unveiling a plan to boost funding for mitigating climate change. The central bank’s move was treated as a surprise because very few in the market expected the BOJ to undertake such an initiative at this stage. The message the BOJ likely intended to deliver, in our view, is that the central bank sees this as an important topic for the market and the economy from a very long term perspective and that it is now ready to join the fight against climate change.

The BOJ’s stance on this issue could have indirect consequences on the market as the central bank is a massive holder of Japanese shares. Up until now, the BOJ had seemingly made no attempt to engage on ESG-related issues as a large shareholder. However, the possibility of the BOJ taking a more active role on corporate governance seems to have increased—albeit very slightly—now that it has signalled its intent to join the struggle to mitigate climate change.

In theory, the BOJ could follow the example of the Government Pension Investment Fund (GPIF), which is another massive holder of Japanese shares that has indirectly engaged on ESG-related issues with the companies it invests in. However, instead of immediately jumping in with bold steps the BOJ may instead start with a low-key approach, subtly communicating to the markets the importance of fighting environmental change.

Market: Stocks mixed in June on combination of positive and negative news

The Japanese equity market was mixed in June, with the TOPIX (w/dividends) rising 1.19% on-month and the Nikkei 225 (w/dividends) falling 0.08%. During the month, stocks seesawed on a combination of positive and negative news. On the negative side, there was growing speculation that the US Federal Reserve Board would begin raising rates earlier than initially planned while concerns persisted over a potential increase in infections caused by COVID-19 variants. In terms of positive news, Japan began to greatly accelerate its vaccine rollout with the introduction of workplace vaccinations, leading to higher expectations that the economy would soon normalize. News that an agreement was reached between US President Biden and bipartisan lawmakers on the president’s infrastructure plan helped raise hopes for greater infrastructure spending, which was also a positive for Japanese stocks. Of the 33 Tokyo Stock Exchange sectors, 19 sectors rose, with Marine Transportation, Mining, and Rubber Products posting the strongest gains. In contrast, 14 sectors declined, including Iron & Steel, Securities & Commodity Futures, and Nonferrous Metals. 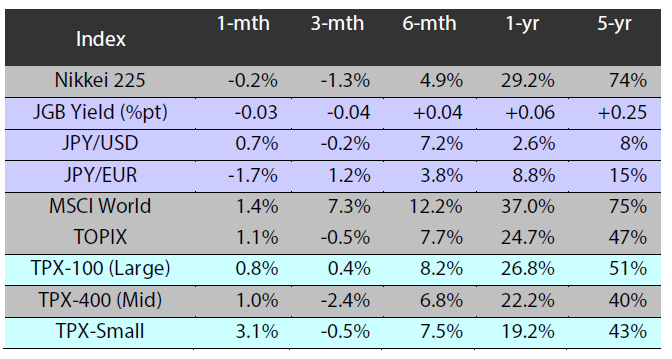 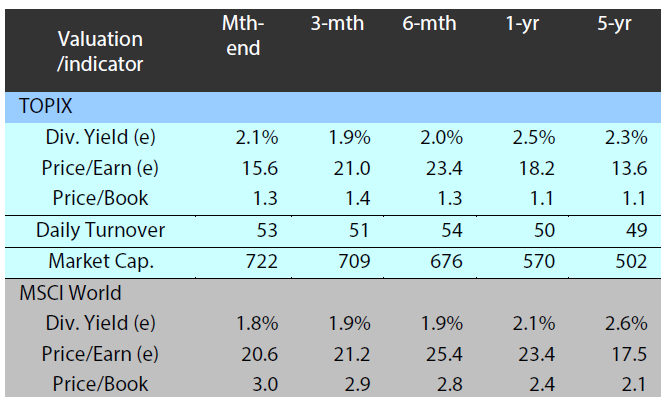 (e) stands for consensus estimates by Bloomberg. Turnover and market cap in JPY trillion. Source: Bloomberg, as at 30 June 2021 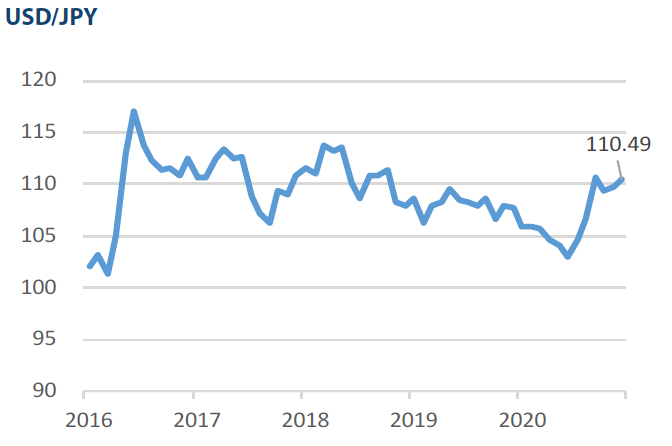