Some well-known Japanese companies have recently received a significant amount of media attention, with Toshiba accused of colluding with a government ministry to thwart foreign investor interests while Mitsubishi Electric was revealed to have falsified key data for three decades. These companies made headlines at a time when Japan is trying to reform its corporate governance framework, prompting some to question the effectiveness of the reforms. However, we believe that investors should stay focused on the bigger picture. These recent examples should be seen as internal control issues; on the other hand, the ongoing corporate governance reforms are broader in scope and intended to alter and raise Japan’s stock market to standards that are acceptable to global investors.

One case in point, the Tokyo Stock Exchange (TSE) is scheduled to reorganise its current five market sections into three in April 2022. The TSE’s reorganisation bid is part of a plan to boost the exchange’s global competitiveness by ensuring that listed firms continue improving their corporate governance and thereby remain profitable. For example, the TSE’s current top tier segment, the First Section, will be reorganized into the “Prime” section, which will impose tougher listing requirements on companies. Market expectations are that companies, with the aim of listing or remaining listed on Prime, will maintain high corporate governance standards.

There are two notable listing criteria for Prime. First is the requirement for companies to fill at least one third of their boards with external directors. This will be a major change for Japan’s boardrooms as there will be almost an instant need for a large number of external directors (potentially thousands). Second is the requirement for Prime-listed companies to have a free float of at least 35%. Raising the free float requirement will not only shift investor focus away from overall market capitalisation but will also further encourage the liquidation of cross-shareholdings—a type of shareholding long frowned upon by investors. The changes being undertaken by the TSE will provide an opportunity to re-evaluate the Japanese market and are expected to attract global investors by enhancing corporate governance and improving boardroom transparency.

Japan’s real estate market appears to be showing signs of a recovery from the pandemic-induced slump. For example, new condominium sales in the Tokyo area reportedly surged in the first half of 2021.The real estate market initially slumped earlier in the pandemic partially due to restrictions placed by the government on the service sector. These led to a slowdown in business operations for restaurants and other similar establishments, particularly in urban centres. However, after an initial delay, the rollout of COVID-19 vaccines in Japan is finally beginning to pick up pace, and prospects have marginally improved for the service sector. Moreover, a shift to work from home early in the pandemic did not result in demand for offices declining as much as some had feared. A significant portion of workers are expected to return to their offices once the economy begins normalising, which should be a supporting factor for office-related REITs. The pandemic also saw the emergence of so-called satellite offices that have popped up halfway between suburbs and the central areas of major cities such as Tokyo, enabling workers to access the conveniences of an office without exposing themselves to a full commute. As such, active investment opportunities in the office space could increase.

As with Japanese stocks, which have already recovered their pre-pandemic levels, the real estate market could also make a similar comeback once the country’s economic recovery gathers momentum. The point is the real estate market has not fully priced in such a recovery, thus presenting a potential bargain which foreign investors appear to have been the first to discover. A market recovery, however, will not favour all real estate sectors, in our view. Prime office spaces in large cities stand to benefit while demand for second-tier property in smaller cities could decline as some workers will continue working from home.

The Japanese equity market fell in July, with the TOPIX (w/dividends) declining 2.18% on-month and the Nikkei 225 (w/dividends) falling 5.23%. Although Japanese equities briefly followed US equities higher on positive US corporate earnings expectations, the market was ultimately weighed down by concerns over a slowing global economic recovery as the US ISM Non-Manufacturing PMI came in weaker than expected. In addition, the Japanese government announced its fourth state of emergency for the Tokyo area, spurring worries that a domestic recovery would be delayed. Following this, investors took an increasingly risk-off approach. Coupled with growing concerns over the continued increase in COVID-19 infections in Japan, this resulted in the market’s decline. Of the 33 Tokyo Stock Exchange sectors, 11 sectors rose, with Marine Transportation, Insurance, and Fishery, Agriculture & Forestry posting the strongest gains. In contrast, 22 sectors declined, including Other Products, Pharmaceuticals, and Mining. 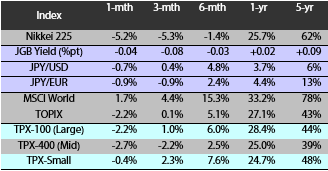 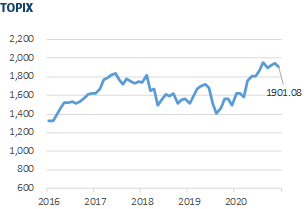 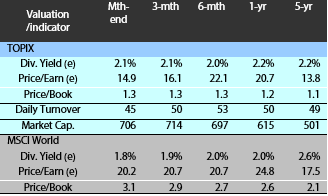 (e) stands for consensus estimates by Bloomberg. Turnover and market cap in JPY trillion. Source: Bloomberg, as at 30 July 2021 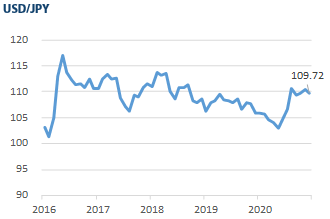