We discuss Japan’s robust manufacturing sector and why it is not about reclaiming the past; we also take a look at the BOJ’s ETF purchases amid the current rally by equities.

Japan’s manufacturing sector is doing well, but it is not about reclaiming the past

Japan’s manufacturing sector is performing well amid the COVID-19 pandemic, as consumer demand has been channelled away from services to goods and because a quicker-than-expected recovery by the Chinese economy has boosted demand for Japanese capital goods. The Japanese manufacturing sector is expected to remain robust for the foreseeable future as many governments are likely to retain fiscal stimulus programs, ensuring continued spending by consumers. Such support will end at some point, but vaccinations are expected to further shore up consumer demand as they help economies normalise.

Prospects are therefore fair for Japanese manufacturing and it might be tempting to speculate that the country can reclaim at least a part of its past, when a dizzying array of products were made in Japan. Currently, many manufacturers no longer produce goods in Japan, having shifted operations to other countries years ago. However, such a development was not exactly a hollowing out of Japanese industry but more of a metamorphosis. Japanese manufacturers moved away from the production of consumer products and concentrated successfully on high value-added goods, such as advanced parts and semiconductors.

As such, when we look to the future it is not about refilling a void left by a perceived hollowing out of Japanese industry, but rather about focusing on new areas of potential development such as digital transformation (DX) and decarbonisation. DX will likely require firms to discover innovations that lead to earnings generation. Within this space, we identify autonomous driving as a technology that could positively impact Japanese manufacturing. As for decarbonisation, Japanese companies have accumulated innovative technology that could cheaply reduce carbon emissions. These firms, however, at times tend to overengineer—a trait that needs to be held in check if manufacturers are to remain competitive in the field of decarbonisation.

Assessing the BOJ’s ETF purchases amid the rally by equities

The media have recently reported that the Bank of Japan (BOJ) could discuss scaling back its exchange-traded fund (ETF) purchases at the central bank’s policy meeting in March. The ETF buying program, part of the BOJ’s unconventional easing scheme, was introduced more than a decade ago and the central bank has since come to own the bulk of the ETF market. Market conditions have changed significantly since the BOJ began these purchases, with the Nikkei Stock Average reaching a three-decade high this year.

The impressive rise by the equity market suggests that the BOJ can afford to technically ease its ETF purchases. That said, the central bank is likely to refrain from directly signalling any intent to taper or stop its ETF buying as long as inflation remains below its 2% target. Rather, the BOJ could opt to take a flexible approach, showing an intent to buy ETFs during market downturns but also ready to reduce its purchases when equities are performing strongly. Through such an approach, the BOJ could eventually buy fewer ETFs while keeping its intended target amounts unchanged.

The equity market, in our view, would be able to withstand any BOJ reduction in ETF purchases when stock prices are rising. Any messaging by the BOJ to the market regarding its purchases will be made through its regular interactions with the market and not just through comments from top officials (such as the governor), and we believe such communication will be effective. The market already has an understanding about when the BOJ is likely to purchase ETFs (for example, when the market declines by a certain percentage in the morning session). Eventually, what will come to matter are the occasions when the BOJ conducts its ETF buying, and not the actual amount it purchases each time.

Current market concerns regard the BOJ halting its ETF purchases and eventually selling the large amount of assets it has amassed. The central bank, however, will need to eventually sell its ETFs as equities, unlike bonds, do not come to maturity. The market should be able to absorb ETF selling by the BOJ if the economy has normalised and the central bank can tighten monetary policy. But that is unlikely to happen during many of our lifetimes, including that of the author’s.

Market: Japan equities edge up in January amid hopes for the economy to normalise

Japanese equities rose in January, with the TOPIX (w/dividends) rising 0.23% on-month and the Nikkei 225 (w/dividends) climbing 0.80%. Stocks moved sideways on both positive and negative news. The government announced a second state of emergency in the Greater Tokyo area following an increase in COVID-19 cases while sharp moves in US equities sparked concerns over continued volatility. At the same time, stocks were supported by growing expectations that stimulus measures from the Biden administration would help drive a US economic recovery; signs of a rebound in capex demand on strong Japan machinery orders; and news that the IMF had raised its 2021 growth outlook for Japan. As a result, the market ended the month slightly higher. Of the 33 Tokyo Stock Exchange sectors, 18 sectors rose, with Oil & Coal Products, Rubber Products, and Mining posting the strongest gains. In contrast, 15 sectors declined, including Precision Instruments, Marine Transportation, and Iron & Steel. 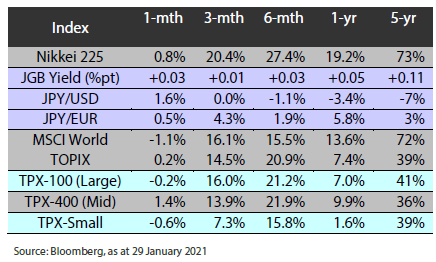 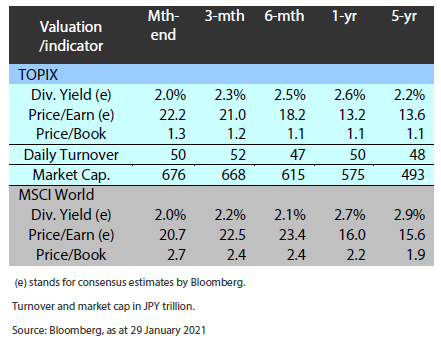 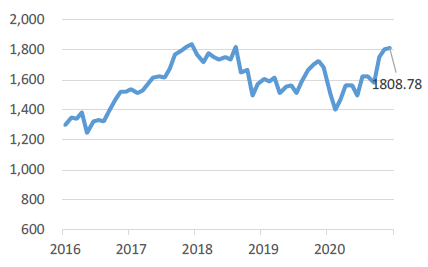