Thoughts on the Nikkei reaching 30,000, and Robinhood frenzy from a Japan market viewpoint

We assess the factors that enabled the Nikkei to rise above the 30,000 threshold for the first time since 1990; we also view the recent Robinhood frenzy from a Japanese market perspective.

Assessing the Nikkei’s rise above the 30,000 threshold

In February Japan’s Nikkei Stock Average rose above the JPY 30,000 threshold for the first time since 1990 amid a global surge in equities. The rally by Japanese equities is a result of massive fiscal spending by a number of countries, notably the US, which has boosted demand globally; in short, many consumers now have more money to spend than they did before the pandemic. Another supportive factor is the rollout of vaccines, which appears to be capping new cases of COVID-19 and reinforcing hopes of economic normalisation. However, since normalisation will take time, the market can count on central bank easing until the economy recovers.

In 1990, the last time the Nikkei was at 30,000, Japan was in the middle of an economic bubble. The market environment in 2021 is markedly different and the economy and equities cannot be described as being in a bubble. Back in the 80s Japan was a global growth engine, but the country is currently caught in a struggle to get the economy back on track. Only if Japan’s fiscal support efforts, vaccine rollouts and central bank easing all fell short could we say that the present state of the market is unjustified by fundamentals and could then be labelled a bubble.

The market is not without potential risks, such as the Biden administration potentially bringing forward its attempt to raise US tax rates. Also threatening the market is the spike in long-term interest rates. A rise by long-term interest rates is not a bad thing in itself as long as a recovery in employment keeps pace with inflation expectations. Rising interest rates, however, will start hurting market sentiment if cash rich consumers rush to spend, resulting in the supply of goods not being able to keep up with demand and triggering inflation fears when the economy’s recovery is still underway.

Viewing the Robinhood frenzy from a Japanese market perspective

The recent frenzy in the US stock market involving video game retailer GameStop, beleaguered hedge funds and retail traders (“Robinhooders”) using trading apps and banding together through social media provided an interesting side story to the broader market’s bull run. Possessing a large and diverse equity market of its own, Japan might look like a place for a similar frenzy to unfold, especially as the number of retail investors opening accounts at online brokerages has soared during the pandemic.

However, Japan is unlikely to experience such a phenomenon, in our view. The main reason is that, compared to Japan, the US equity market is significantly more domestic, a trait which ultimately allowed US retail traders to square up against hedge funds. In Japan, foreign players generate the largest amount of market transactions, and these investors tend to be trend followers. Japanese retail investors, on the other hand, prefer to take the contrarian approach adopted by many hedge funds. Therefore, Japanese retail investors are more likely to end up pitting themselves against trend-following foreign investors instead of against hedge funds.

The increase in the number of Japanese retail investors joining the market during the pandemic is a healthy development, in our view. The broader participation adds depth to the market, while retail investors can improve their financial literacy and better prepare themselves for life after retirement.

Market: Japan equities gain on vaccine rollouts, hopes for the economy to normalise

The Japanese equity market rose in February, with the TOPIX (w/dividends) rising 3.12% on-month and the Nikkei 225 (w/dividends) climbing 4.75%. In the first half of the month, stocks moved upwards on signs of an earnings recovery in Japanese businesses as the earnings season came to a close, while better-than-expected Japanese October-December GDP data also provided a boost to the market. Stocks were further supported by growing expectations for an economic recovery in the US after additional stimulus measures were passed. Toward the end of the month, however, Japanese stocks gave back some of their gains after US tech stocks tumbled on rising US long-term interest rates. Of the 33 Tokyo Stock Exchange sectors, 26 sectors rose, with Mining, Air Transportation, and Marine Transportation posting the strongest gains. In contrast, seven sectors declined, including Pharmaceuticals, Foods, and Precision Instruments. 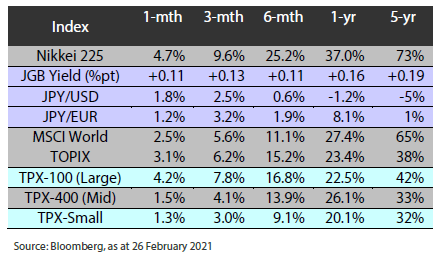 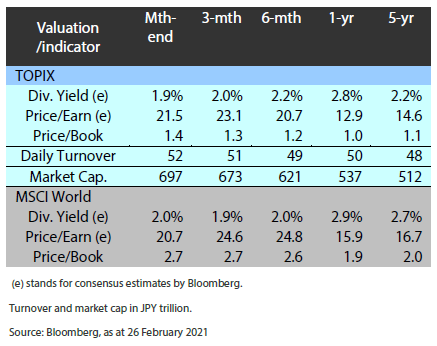 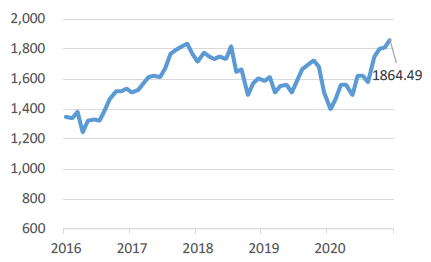 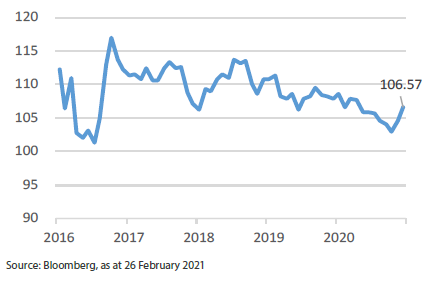