Looking at Japan’s corporate earnings, thoughts on the digital yen
Share this

We explain why corporate earnings in FY21 are expected to begin reflecting recovering confidence among Japanese companies as vaccine rollouts gain momentum. We also look into the BOJ’s trial run for a digital yen and the impact such a currency could have on the economy and markets.

Japan’s earnings season peaked in May, with companies reporting results for the previous fiscal year through March 2021. All in all, earnings were strong, especially those of exporters. Some exporters posted numbers that even exceeded earnings during the height of the COVID-19 pandemic in 2020. Such robust results were a factor in the Nikkei Stock Average reaching its current level of around JPY 29,000 versus the pre-pandemic level of JPY 24,000. Such strong results will allow investors to shift their focus from speculation to actual corporate profits.

While some earnings results were encouraging, corporate forecasts for the fiscal year through March 2022 (FY21) were modest for the most part. The conservative forecasts, however, were to be expected with a pandemic in full swing and Japan’s vaccination rollout¬—which has considerably lagged other industrialised nations—still getting started at the time earnings were released. As FY21 progresses, we expect Japanese manufacturers and exporters to continue recovering on the back of strong personal consumption in the US, which in turn is being boosted by the Biden administration’s fiscal stimulus. It is difficult to predict exactly when the other major sectors, notably the non-manufacturing and service-related sectors, will begin making a full-fledged recovery as the vaccine rollout is still in its early stages and parts of the country remain under a state of emergency. However, it is only a matter of time before a significant portion of the population, particularly the elderly, is vaccinated, paving the way for a full re-opening of the economy. By the interim earnings season in October and November, the vaccination of the elderly should be complete, allowing for mass inoculation of the rest of the population.

We expect confidence towards Japan Inc. to increase along with vaccinations, and such confidence should begin to be reflected in the earnings of service-related companies. At this stage service-related sectors are also likely to receive support from the government-led “GoTo” campaign, which provides discounts to travelers and diners. Japan may have been slow with its vaccine rollout compared to other countries, but it is proceeding steadily towards an economic re-opening. And when the economy begins normalising, Japan will have plenty of pent-up demand to boost consumption.

Keeping in step with its peers, the Bank of Japan (BOJ) in April began a year-long trial for a central bank digital currency (CBDC). In this first phase, the BOJ will test the feasibility of a digital yen. We see two main effects a CBDC could have if the BOJ eventually issues yen in digital form. The first is the positive impact it could have on consumers. The digitisation of the yen could free some of the vast amounts of funds stuck in savings accounts. In a country where cash transactions still play a dominant role, digitisation of the yen could also reduce the perceived need to hold large amounts of bills for emergencies. The freeing up of cash previously reserved for such roles could allow individuals to spend money in a more rational way. A rational spender, in turn, could become more proactive towards investments, increasing the number of individual investors unafraid of logical risk-taking. The second is the effect a CBDC could have on Japan’s banks. Digital currencies are likely to lessen individuals’ reliance on the banking system. For example, an employer could pay an employee directly through a digital transaction instead of depositing their salaries in bank accounts. Less money being deposited at financial institutions means that banks will have fewer funds to offer as loans; in short, CBDCs could change the economic function of banks and alter the way credit is supplied. The BOJ may have to consider this potential impact carefully if it wants to avoid the negative aspects of an altered banking landscape, which could encourage activities outside of the system such as shadow banking.

If the BOJ is able to find a solution regarding the role played by banks under a CBDC-oriented system, it could lead to a more effective monetary policy as interest rates would have a more direct impact. For example, in a digitised currency environment, lowering rates could cause more funds to flow into the stock market, as stashing cash under mattresses would be a thing of the past. A more effective means of executing monetary policy could also stabilise the yen in the foreign exchange market. The BOJ is certainly not leading the pack with CBDCs, but its efforts could eventually have a positive impact on the economy and markets.

The Japanese equity market rose in May, with the TOPIX (w/dividends) rising 1.38% on-month and the Nikkei 225 (w/dividends) climbing 0.16%. Japanese equities declined in the first half of the month, following weakening US stocks as higher-than-expected growth in US consumer prices further fuelled inflation concerns. However, stocks were lifted by views that Japan’s accelerating vaccination efforts would help bring about a normalisation of the economy. In addition, US President Joe Biden’s proposed USD 6 trillion FY22 budget helped bolster expectations for US economic growth, which was also a positive for the Japanese market. As a result, stocks ended the month higher. Of the 33 Tokyo Stock Exchange sectors, 21 sectors rose, with Rubber Products, Transportation Equipment, and Precision Instruments posting the strongest gains. In contrast, 12 sectors declined, including Information & Communications, Fishery, Agriculture & Forestry, and Electric Power & Gas. 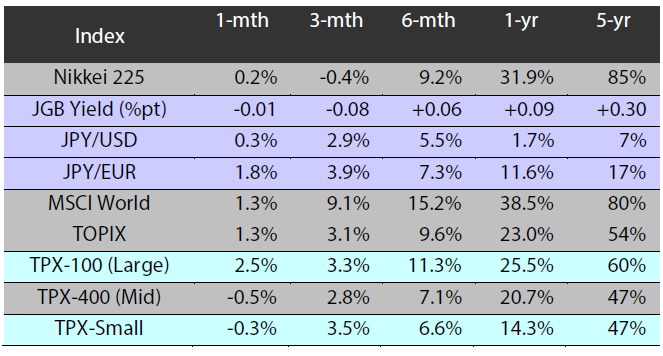 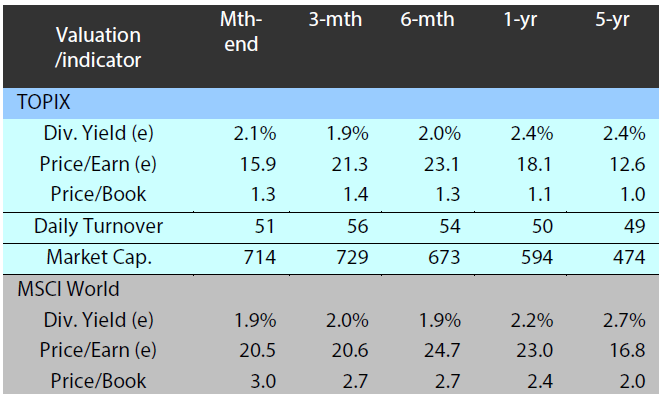 (e) stands for consensus estimates by Bloomberg. Turnover and market cap in JPY trillion. Source: Bloomberg, as at 31 May 2021 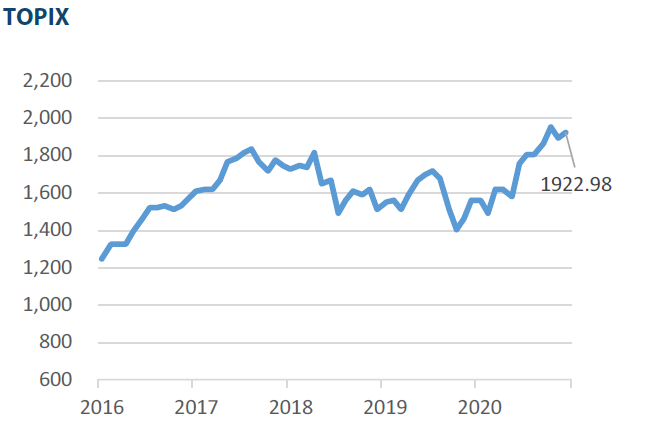 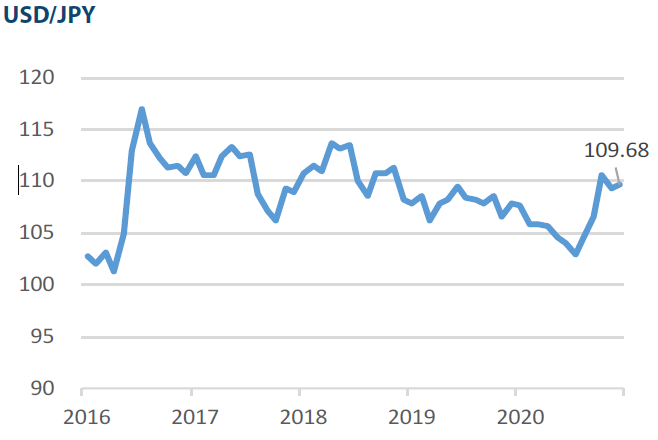