US Treasury yields rise in September
UST yields traded in a relatively tight range for most of September, with markets focused largely on the US Federal Reserve’s (Fed) taper plans. Towards month-end, the US Federal Open Market Committee finally alluded to moderating its asset purchases as soon as November, and its latest dot plot signalled interest rate increases could come sooner than expected, triggering a meaningful jump in UST yields and broad-based US Dollar (USD) strength. Thereafter, an escalating power crunch across Europe and China amid surging energy prices prompted concerns that inflation will be stickier than first thought, driving a further rise in yields. Risk sentiment was also dampened by worries around downward pressures to China’s growth outlook, threatened by power outages across many of the country’s manufacturing hubs, coupled with the possible collapse of China Evergrande. Overall, 2-year and 10-year yields ended the month at 0.28% and 1.49%, respectively, about 6.7 bps and 17.8 bps higher compared to end-August.

Monetary authorities leave interest rates unchanged
Central banks in Malaysia, Thailand, Indonesia and the Philippines left policy rates unchanged in September. Although Bank Negara Malaysia assesses that the reimposition of lockdown measures has dampened growth momentum, it believes this will be partly mitigated by the government’s fiscal stimulus packages and improved adaptability of firms and households. That said, it sees “significant downside risks” to the growth outlook. Meanwhile, Bank of Thailand kept its 2021 gross domestic product (GDP) growth forecast at 0.7% but raised its growth projection for 2022 to 3.9% (from 3.7%). The monetary authority also widened its 2021 current account deficit forecast, prompted by a more cautious view of the recovery in tourist arrivals. Bank Indonesia maintained its 2021 GDP growth forecast range of 3.5-4.3% and 2021 current account deficit range of 0.6-1.4% and reiterated that 2021 headline consumer price index (CPI) inflation is likely to rise to within its 2-4% target. Elsewhere, Bangko Sentral ng Pilipinas revised its CPI inflation forecasts higher. It now expects the headline number to register 4.4% (from 4.1%) in 2021, 3.3% (from 3.1%) in 2022 and 3.2% (from 3.1%) in 2023. In addition, the bank noted that the balance of risks to the near-term inflation outlook were tilted to the upside.

Inflationary pressures mostly ease in August
August headline CPI prints in China, India, Malaysia, Thailand and Singapore eased, while similar gauges of inflation in the Philippines and Indonesia accelerated from July levels. A moderation in both food price and transport price inflation prompted Malaysia’s CPI print to ease in August. In Singapore, lower private road transport inflation contributed to the moderation in headline CPI. Overall inflation in Thailand eased further, undershooting the Bank of Thailand’s target range anew. Meanwhile, headline CPI in Indonesia posted a 1.6% annual increase in August, accelerating slightly from the 1.5% print in July. In the Philippines, headline inflation in August was significantly higher-than-expected at 4.9% year-on-year (YoY), prompted in part by higher food inflation.

Thailand raises its public debt limit; Singapore unveils additional fiscal support package for businesses
The Thai government raised the public debt limit to 70% of GDP (from 60%), citing the need to increase fiscal space and accommodate any potential rise in borrowing needs over the medium term. Separately, the Public Debt Management Office unveiled its FY22 (ending September) bond issuance target, which was meaningfully higher than the FY21 target. Elsewhere, Singapore re-imposed tighter restrictions on social gatherings from 27 September, following a significant increase in the number of COVID-19 community cases. The latest measures are set to last a month and was deemed necessary to avoid stressing the country’s hospital system. Subsequently, the Finance Ministry announced a Singapore dollar (SGD) 650 million support package to help businesses impacted by the latest restrictions.

Cautious on rates markets; expect Philippine peso and Thai baht to underperform regional peers
We have turned cautious on rates markets, as we anticipate UST yields to adjust higher ahead of the Fed’s policy changes and amidst lingering concerns that inflation will be stickier than first thought. That said, we anticipate that policymakers will stay on the path of gradual policy normalisation, to avoid policy mistakes. Within Asia, we expect low yielders like South Korea, Singapore, Thailand and Hong Kong to underperform. On currencies, we are cautious on the Indian rupee, South Korean won, Philippine peso and Thai baht, with surging oil prices likely to weigh on these currencies. Meanwhile, delays in the reopening of major cities to foreign arrivals is expected to further weigh on the baht.

Asian credits end weaker in September
Asian credits returned -1.63% in September, as credit spreads widened by 6.8 bps and UST yields rose. There was a marked divergence in performance between Asian high-grade (HG) and their high-yield (HY) counterparts, attributed to the latter being weighed down by immense weakness in the Chinese property sector. At the end of the month, Asia HG returned -0.93%, as the 4.7 bps tightening in spreads was insufficient to offset the rise in UST yields. HY retreated 4.15%, with spreads widening by 48.7 bps.

A significant part of the weakness in Asian credit, particularly on the high-yield side, emanated from concerns surrounding the potential default of one of China’s largest real estate conglomerates, China Evergrande Group. Although Evergrande’s distress had already been known over the last few months to those who closely follow the market, the concerns came to a head in September as the negative developments intensified, culminating in further rating downgrades by all three major rating agencies and missed coupon payments on certain USD bonds, with a 30-day grace period to default. In addition to Evergrande, negative headlines of liquidity stress and rating downgrades spread to a few other weaker Chinese property companies. The stronger, investment grade-rated Chinese developers, while not immune to the weakness on the high-yield side and the government’s ongoing tightening of property sector policies, held up better. Markets were also worried about China’s slowing economic growth momentum, including potential spillovers from the real estate sector, and ongoing regulatory scrutiny on other key sectors such as technology. Towards the end of the month, reports of power outages forcing factory shutdowns across many of the country’s manufacturing hubs further weighed on sentiment.

Globally, in addition to the passing impact from the Evergrande situation, risk sentiment was also negatively affected by the sudden jump in major government bond yields triggered by a combination of factors including a hawkish shift by major central banks and surge in energy prices. While risk aversion in developed credit markets was contained, outflows from Emerging Market bond funds did pick up pace towards the end of the month as a result of these negative developments.

Within Asian credit, there was a striking gap between China, which widened 18 bps against all other large country-segments, in which spreads mostly tightened. By sector, considerable spread widening similarly occurred in real estate, while spreads of other sectors ended the month mostly narrower. 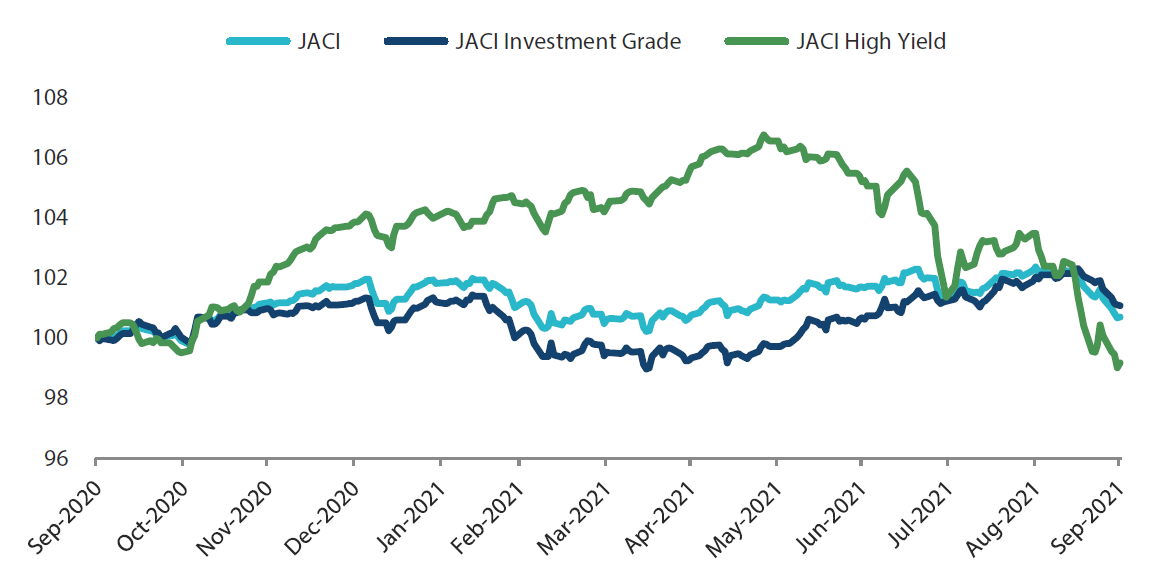 Note: Returns in USD. Past performance is not necessarily indicative of future performance.
Source: Bloomberg, 30 September 2021

Fundamentals supportive of tighter Asian credit spreads, though downside risks have increased
We believe medium-term fundamentals remain supportive of moderately tighter Asian credit spreads over the next six months. However, near-term downside risks and market volatility have increased, which calls for a more gradual and selective approach to adding credit risk over the next few months.

The tentative improvement in the COVID-19 situation across many Asian economies reinforces our view that the setback to growth is likely to be temporary. Progress on vaccine rollout, the gradual re-opening in a number of countries, as well as still supportive fiscal and monetary policies, should revive the growth momentum as we head into 2022. Similarly, we expect overall Asian corporate credit fundamentals to remain robust, although the positive earnings momentum in the second half of 2021 could be softer and may vary in degree by sector.

Nevertheless, there are a few downside risks that could derail this constructive outlook, key among which is a deeper China economic slowdown due to factors such as the ongoing tightening in the property sector, regulatory reforms in technology and other sectors, intensifying efforts to reduce carbon emissions and sporadic local COVID-19 outbreaks. A disorderly default by Evergrande, while not our base case, could also roil market sentiment temporarily. Other key risks include a more aggressive tightening of monetary policy by the Fed, a failure by US Congress to raise or suspend the country’s debt ceiling, brewing global stagflation worries due to the shortage in energy supplies and resulting surge in energy prices. Uncertainties relating to US-China bilateral relations also remain in the background.