Region’s government bond yields rise along with US Treasury yields

Prospects of rising growth and inflation push UST yields higher
The UST yield curve steepened further in March. The initial rise in yields was driven by a strong US employment report and disappointment in US Federal Reserve (Fed) Chairman Jerome Powell's comments that the central bank's current policy stance was appropriate, as some investors had hoped that he might signal greater concern towards the sharp moves in US rates markets. There was a partial retracement in yields thereafter, but this proved to be short-lived. Stronger-than-expected domestic economic data prints, passage of the USD 1.9 trillion stimulus package and a ramp-up in the rate of US vaccinations amid slowing daily infection rates prompted investors to increasingly price in accelerating growth in coming quarters. Meanwhile, although the Fed maintained its accommodative policy, it announced that bank regulatory exemptions introduced at the start of the pandemic would expire on 31 March. Overall, the benchmark 2-year and 10-year yields ended the month at 0.162% and 1.742%, respectively, about 3.2 bps and 33.5 bps higher compared to end-February. 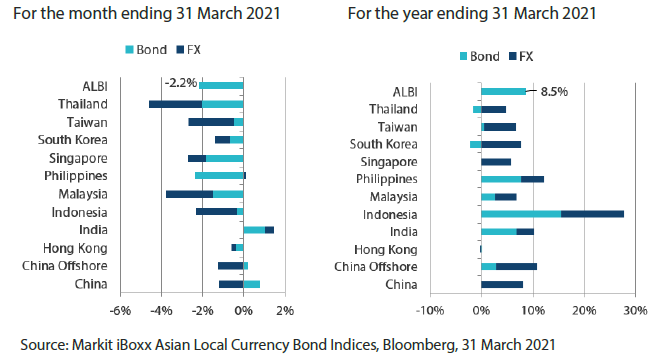 Headline inflation prints register mostly higher in February
Higher transport inflation was a key factor that pushed up the headline consumer price index (CPI) prints in China, Singapore, South Korea, Malaysia and the Philippines in February. In contrast, deflationary pressures in Thailand accelerated, with its headline CPI registering -1.17% in February from -0.34% in January on the back of lower food prices and government measures to curb living costs. Similarly, headline CPI in Indonesia eased in February. At 1.4% YoY, this marked a further decline below Bank Indonesia's target as prices of food, beverage and tobacco moderated.

Central banks leave their policy rates unchanged
Monetary authorities in Indonesia, Thailand, Malaysia and the Philippines kept their respective policy rates unchanged. Notably, the Bank of Thailand lowered its 2021 gross domestic product (GDP) growth forecast to 3.0% (from 3.2%), citing the resurgence of the COVID-19 outbreak, and raised its headline inflation forecast for the same year to 1.2% (from 1.0%) as oil prices rose. Bangko Sentral ng Pilipinas (BSP) similarly raised its 2021 CPI inflation forecast to 4.2% from 4.0% and above its 2-4% target. BSP attributed the higher forecast to supply-side factors and rising oil prices. Overall, the central bank sounded relatively more hawkish this month, stating that it is "prepared to take immediate measures as appropriate to ensure that the monetary policy stance continues to support the BSP's price and financial stability objectives". Meanwhile, Bank Negara Malaysia also sees a "temporary spike" in inflation in the second quarter due to the low base but expects a moderation thereafter.

Fitch affirms Indonesia's rating at “BBB”; governments announce more fiscal support measures
Fitch Ratings affirmed Indonesia's sovereign credit rating at “BBB” and left the outlook at “stable”. According to the credit rating agency, the impact of the pandemic on Indonesia's fiscal metrics has been less severe than for most of its peers. In Thailand, the government announced additional Thai baht (THB) 360.7 billion worth of targeted fiscal and financial support measures, the bulk of which are focused on providing liquidity assistance to vulnerable small- and medium-enterprises, particularly within the tourism sector. Similarly, Malaysia announced a new economic stimulus package worth Malaysian ringgit (MYR) 20 billion—the sixth package unveiled since the start of the COVID-19 pandemic, while South Korea unveiled an extra budget of KRW 15 trillion to boost support for small businesses and safeguard jobs.

China sets a growth target of above 6% for 2021
At the annual National People's Congress, Chinese Premier Li Keqiang announced that the government would be targeting GDP growth of above 6% in 2021. The government would cut back its fiscal support for the economy by lowering the fiscal deficit target to 3.2% of GDP this year from “above 3.6%” in 2020. It would also cut back the local government special bonds quota to renminbi (RMB) 3.65 trillion, slightly smaller than the RMB 3.75 trillion quota last year, and would not be issuing additional “COVID-19” bonds this year following the issuance of RMB 1 trillion of the bonds last year to fund COVID-19 relief. On monetary and credit policy, the premier reiterated the government’s commitment to align aggregate financing and broad money growth with nominal GDP growth.

Further reduced overall duration in South Korea, Hong Kong, Singapore and Indonesia
The continued sell-off in the UST market further pushed up regional government bond yields in March. With markets increasingly pricing in accelerating US growth as well as higher inflation in the coming quarters, the US rates may remain on an uptrend for a while. Consequently, we continue to favour shorter durations for Singapore government bonds due to their relatively higher correlation to USTs. We also favour shorter durations for Indonesian bonds on concern over Indonesia's vulnerability to swings in Emerging Market sentiment.

Cautious on the IDR and KRW
We remain defensive on regional currencies, particularly on the rupiah and won, with the view that there could be further USD strength on the back of US growth optimism.

Asian credits weaken anew on the back of rising UST yields
Asian credits retreated by 0.39% in total return, as a positive spread return was unable to offset the sharp rise in UST yields. Asian HG credits underperformed their HY counterparts, declining 0.46%, even as spreads tightened by 9 bps. Asian HY returned -0.13% in the month, despite credit spreads narrowing by 10 bps.

Growth optimism and expectations of higher inflation continued to steer broad market direction in March, including that of Asian credits. The month opened with modest spread widening amid a further repricing in the US rates market. The passage of the USD 1.9 trillion stimulus package in the US and better domestic economic data, alongside good vaccination velocity and decelerating daily infection rates, prompted investors to increasingly price-in accelerating growth in coming quarters. As US rates pushed higher, risk sentiment weakened. Market tone turned positive after the Fed maintained its accommodative policy, and continued to signal that the first rate hike will not happen before 2024. Over in China, the government set its 2021 growth target at “above 6%”. The country also recorded an impressive set of domestic activity numbers in the first two months of the year, albeit due partly to an extremely low base as a result of last year’s COVID-19 outbreak. Meanwhile, prospects of a “reset” in US-China relations faded on reports of heightened disagreements between senior officials at a bilateral meeting in Anchorage, Alaska.

By country, spreads of most major country segments, save for India and Thailand, tightened in March. Chinese credit spreads ended largely unchanged, as the positive global risk environment was dampened by earnings volatility headlines from some Chinese HY property developers as well as headlines on potential distress in a few local state-owned government industrial names. In contrast, Indonesian credits started the month on a weak footing but regained ground eventually, with spreads ending about 13 bps tighter, as Emerging Market fund flows stabilised.

The FY2020 full-year earnings for Asian corporates and banks were modestly weaker, but with sequential recovery already evident in the second half of 2020 (2H 2020). This also led to credit metrics staying resilient with no significant impact on credit ratings. That said, some sectors were still experiencing residual impact of the COVID-19 restrictions, for example the consumer services sectors with large exposures to retail such as airlines, gaming, and HK property companies. Meanwhile, oil & gas and metals & mining companies saw a strong recovery in 2H 2020 as commodity prices rebounded. Chinese property developers’ results were mixed, with most reporting stable to improving earnings. This was despite generally lower gross profit margins and improved credit metrics, particularly on net gearing, as the property developers strived to comply with the “three red lines” policy on credit metrics. 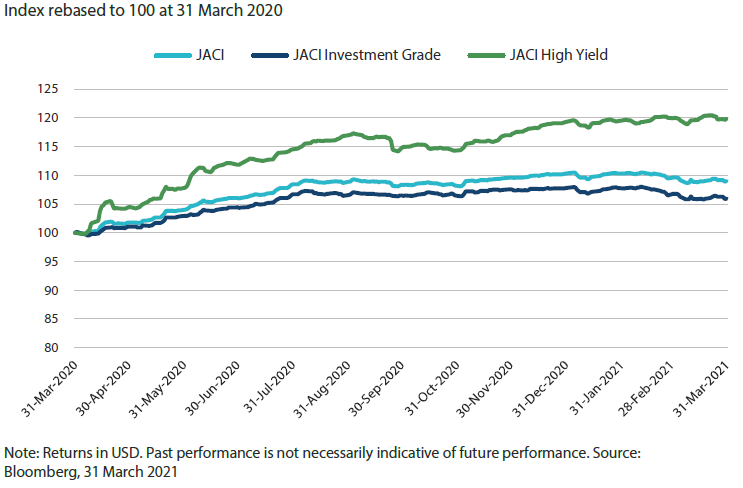 Asian credit spreads to remain resilient, though downside risks remain
We expect Asian credit spreads to have scope to tighten modestly from here, driven by the ongoing economic recovery, supportive fiscal and monetary policies and progress on COVID-19 vaccination. We believe that overall corporate credit fundamentals should remain robust, with sequentially stronger earnings momentum in the first half of 2021 (1H 2021). That said, valuation is more neutral now having priced in much of the improving fundamentals. We believe that further spread tightening from here will be more laboured, with more frequent market pull-backs likely.

More recently, the reflation theme has gained momentum, leading to a sharp rise in developed market sovereign bond yields, particularly the longer-maturity segments. This is despite major developed market central banks reiterating that they will not prematurely withdraw their accommodative monetary policies. While the rise in yields is, to a large extent, justified by the improving economic outlook, the pace of the increase is beginning to cause anxiety across many risk assets and may negatively affect credit spreads as well. Some modest widening in selective sectors with weaker fundamentals and technical backdrops could therefore be a possibility in the near-term.

In addition to the reflation theme, the risk of US-China bilateral relations failing to stabilise has heightened following the tense talks in Alaska. This was the first high-level US-China meeting for the Biden administration and the ideological differences between the two powers were in clear display. We do not expect a significant widening in Chinese credit spreads for now, but relations between Washington and Beijing is certainly a key area to watch, particularly in the wake of the tense talks.