The UST yield curve steepens in January
UST yields rose sharply at the start of the year as the Democrats gained control of the Senate and boosted the prospect of increased US federal spending. After his inauguration on 20 January, US President Joe Biden proposed a USD 1.9 trillion economic stimulus package. Meanwhile, the US Federal Reserve stood pat on the policy rate and its monthly bond purchases and pledged to keep support intact until a full economic recovery. Towards the month-end, concerns about heightened US stock market valuations and uneven distribution of vaccine rollouts triggered some risk aversion in markets, prompting UST yields to retrace some of the earlier widening. The benchmark 2-year and 10-year yields ended about 1.1 bps lower and 15.2 bps higher, at 0.111% and 1.067%, respectively. 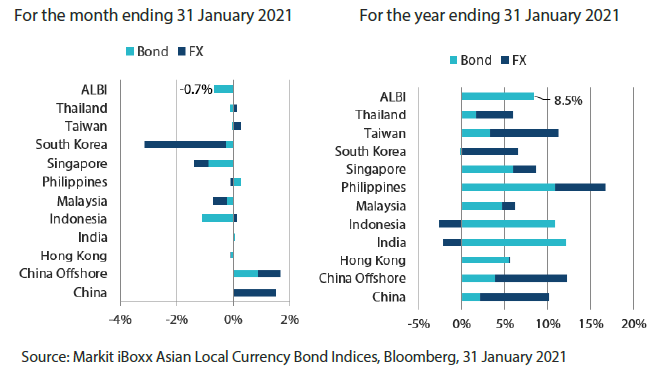 Inflationary pressures mostly accelerate
Consumer price indexes (CPI) registered -1.4% year-on-year (YoY) in Malaysia and -0.27% YoY in Thailand, improving from November’s -1.7% and -0.41%, respectively, owing to a rise in transport inflation. Headline CPI in the Philippines registered 3.5% YoY in December on higher food and transport inflation, while a similar gauge of retail inflation in Indonesia increased modestly as food prices exerted upward pressure. In China, the rise in CPI inflation was mainly driven by a rebound in pork prices . Elsewhere, lower vegetable prices pushed India's headline CPI down to 4.6% YoY from 6.9% in the prior month.

China's economy expands in 2020; South Korea and the Philippines experience economic contraction
China's fourth quarter gross domestic product (GDP) increase was better than expected, with growth in the services sector being the main driver of the 6.5% YoY expansion. For the full year of 2020, China’s GDP grew 2.3%. Meanwhile, economic activity in the Philippines shrank 8.3% YoY in the fourth quarter, from -11.5% in the July to September period. The mining and agriculture sectors were weak, due to typhoons and flooding in November, while growth in the manufacturing and construction sectors improved. For the full year of 2020, the country’s GDP contracted 9.5%, marking the worst economic performance since 1947. Elsewhere, South Korea's economy registered a 1% decline for 2020, after GDP growth fell 1.4% YoY in the last quarter of 2020.

Policy rates unchanged in South Korea, Indonesia and Malaysia
The Bank of Korea announced that it would maintain its accommodative monetary policy stance to help support the economic recovery, after leaving policy rates unchanged. Meanwhile, Bank Indonesia stuck to its 2021 growth forecast, and pledged to continue supporting the economy. It also reiterated its commitment to FX stability. In Malaysia, the central bank left its policy rate unchanged, sounding slightly more optimistic on the growth outlook. Notably, it expects domestic growth to improve from the second quarter onwards, driven by global demand and production from new manufacturing and mining facilities.

More cautious on overall duration view
The marked steepening in the UST yield curve, prompted largely by the prospect of increased federal spending, curtailed demand for regional government bonds. Consequently, we turned more cautious in our overall duration outlook in the near-term, as we wait for UST yields to stabilise. In particular, we changed our outlook from overweight to neutral for Indonesia and Malaysia, and underweight for Korea. Over the medium term, we expect regional government bonds to remain in demand as global interest rates remain low and inflationary pressures benign.

The Asian credit market had to contend with multiple headwinds in early January. Apart from the sharp upward move in UST yields, US restrictions on buying securities of select Chinese corporates, coupled with idiosyncratic risk within the Chinese property sector and a deluge of primary supply, weighed on investor demand. Spreads subsequently ground tighter mid-month, as risk markets rallied following the smooth transition of power in the US. Towards month-end, concerns around heightened US stock market valuations and uneven distribution of vaccine rollouts triggered some risk aversion in markets anew. Over in China, GDP growth in the final quarter of 2020 was better than expected, marking the highest reading since the fourth quarter of 2018. Consequently, full-year GDP growth registered 2.3%, making China the only major economy to avoid a contraction in 2020. Elsewhere, Fitch Ratings affirmed the Philippines’ rating at BBB with stable outlook, while Moody’s affirmed Malaysia’s rating at A3 rating with stable outlook. Demand technicals for Asian credits were supported by continued inflows into Emerging Market (EM) hard currency bond funds.

Spreads of most major country segments ended tighter in the month. Chinese credits stood out, with spreads ending slightly wider, as a confluence of factors including US sanctions on Chinese companies and negative headlines for the property sector weighed on investor confidence. Meanwhile, sentiment towards Malaysian credits was negatively affected by the government’s re-imposition of the movement control order in several states, and the subsequent declaration of a state of emergency (until August) to help rein in rising COVID-19 infections in the community.

Flurry of primary activity
Activity in the primary market picked up significantly in January. For the month, total issuances amounted to about USD 58.4 billion. The HG space saw a whopping 75 new issues amounting to USD 39.6 billion, including a USD 3.8 billion three-tranche Republic of Indonesia sovereign bond issue and a USD 2.5 billion three-tranche Hong Kong sovereign bond issue. Meanwhile, the HY space had 66 new issues amounting to about USD 18.8 billion. 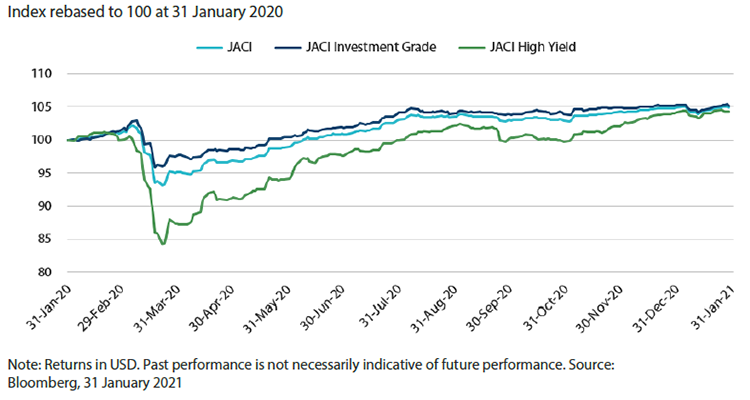 Asian credit spreads to continue tightening slowly, though downside risks remain
Asian credit spreads are expected to continue tightening slowly over the medium-term. High-frequency indicators suggest a recovery is underway in most Asian economies, lending support to overall corporate credit fundamentals. Credit-supportive fiscal and monetary policies are also expected to remain in place in most developed and EM countries, even if incremental easing measures are likely to moderate going forward. Progress on the development of vaccines and better treatment for COVID-19 cases further reinforce the positive backdrop. The technical backdrop is also favourable, with inflows to EM hard currency bond funds expected to remain robust. Valuation is no longer cheap, with more regular episodes of market pull-back expected given the sharp rally in credit spreads over recent months.

In our view, the key downside risk to Asian credits in 2021 is US-China bilateral relations failing to stabilise under the Biden administration. President Biden has repeatedly stressed multilateralism as a key foreign policy pillar, and there are hopes of US-China relations being reset after a tumultuous four-year period. However, the underlying technological and ideological tensions between Washington and Beijing could dash such hopes. In addition to geopolitical issues, a premature withdrawal of the accommodative fiscal and monetary policies currently in place is another downside risk that could derail the positive outlook for risk assets, including Asian credits.