Fears of rising inflation push UST yields higher
The potential return of long-muted inflation sparked a meaningful jump in UST yields in February. Fears of rising price pressures were prompted largely by the combination of robust domestic data, positive development on the COVID-19 vaccine front, and an anticipated increase in US federal spending. Bond yields surged despite comments from US Federal Reserve (Fed) Chairman Jerome Powell; he noted that the economic recovery is “uneven and far from complete,” the economy will need the central bank’s help for “some time” to get back to full employment and that the Fed has no plans to tighten monetary policy prematurely. Overall, the benchmark 2-year and 10-year yields ended the month at 0.13% and 1.41%, respectively, about 1.9 bps and 34 bps higher compared to end-January. 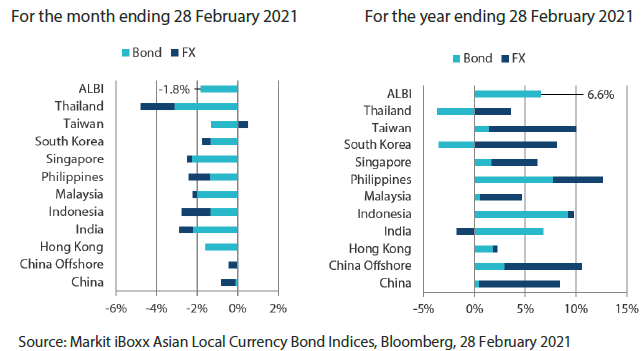 Headline inflation prints for January mixed
Headline consumer price index (CPI) prints in Singapore, South Korea, Malaysia and the Philippines rose, while similar gauges of consumer inflation fell in Indonesia, India, China and Thailand. Higher food inflation, prompted mainly by surging pork prices, was the main factor that drove inflationary pressures in the Philippines to print 4.2% Year-on-Year (YoY), the highest level in two years. In Singapore, headline CPI registered 0.2% in January, up from 0% the month before. The acceleration was due largely to higher car prices and housing rents, as well as a smaller decline in costs of services. In contrast, headline CPI inflation in Indonesia dropped slightly to 1.6% YoY in January from 1.7% in December, on the back of a moderation in food, beverage and tobacco inflation. Similarly, the headline CPI print in Thailand fell to -0.34% from -0.27%, owing mainly to lower food inflation.

GDP growth in India, Thailand and Indonesia rebound in the fourth quarter
India’s economy rebounded strongly in the fourth quarter of 2020. The YoY growth came in at 0.4%, up from -7.3% in the previous quarter. The improvement was broad-based across sectors and led by private domestic demand. In Indonesia, growth registered slightly stronger-than-expected in the same period. The YoY contraction was narrower at 2.2%, from a decline of 3.5% in the July to September period. Notably, contribution from total domestic demand fell as government consumption growth dropped. Similarly, Thailand’s fourth quarter GDP growth picked up to a better-than-expected -4.2%, from -6.4% in the third quarter. The improvement in the manufacturing and agricultural sectors helped offset the continued drop in tourism-related sectors. Meanwhile, GDP growth in Malaysia fell to -3.4% after a strong recovery in the prior quarter. The deeper contraction was led by a drop in private consumption, reflecting fresh restrictions amid a resurgence of COVID-19 cases.

Singapore’s fiscal deficit to narrow; India announces an expansionary budget
Singapore’s Finance Minister Heng Swee Keat announced that the country’s overall deficit is expected to substantially narrow to 2.2% of GDP in fiscal year (FY) 2021, from 13.9% of GDP in FY 2020. The budget provided targeted measures for the vulnerable sectors via the Singapore dollar (SGD) 11 billion COVID-19 Resilience Package, and emphasised the need for long-term economic restructuring, allocating SGD 24 billion to this over the next three years. According to Heng, Singapore will dip into reserves to fund the deficit. That said, he also announced that the government would be issuing green bonds to finance major long-term infrastructure projects. In contrast, Indian Finance Minister Nirmala Sitharaman presented an expansionary budget, announcing that the fiscal deficit is set to jump to 9.5% of GDP for FY 2021 (ending March 2021), moderating to 6.8% in FY 2022. Notably, the planned increase in public spending is intended to improve healthcare and infrastructure across the country.

Bank Indonesia (BI) lowers its policy rate by 25 bps; Bank of Korea announces bond purchases
The Indonesian central bank lowered its policy rate by 25 bps to 3.5% after keeping it unchanged at the previous two meetings. According to BI, the lower-than-expected fourth quarter GDP growth and inflation that was “too low”, were the main factors that prompted the move. In addition, the central bank also unveiled targeted measures of macro-prudential easing. For 2021, the central bank cut its growth forecast to 4.3 – 5.3%, from 4.8 – 5.8% previously. Elsewhere, Bank of Korea left its policy rate unchanged, and announced plans to purchase as much as KRW 7 trillion worth of government bonds in the first six months of 2021. On top of this, the bank said that it will take extra measures, if necessary, to respond to the recent rise in bond yields.

Favour shorter durations in South Korea, Hong Kong, Singapore and Indonesia
Growing confidence in US recovery has prompted markets to increasingly price in the return of inflation, driving US longer-term rates much higher. This had resulted in the underperformance of local currency government bonds, which have a relatively higher correlation with USTs. Going forward, we believe high-yielding bonds such as Indonesia could be more vulnerable to a further steepening in the UST yield curve, as the relative appeal in holding them decreases. Meanwhile, we believe the Singapore government yield curve could steepen further in anticipation of the issuance of the infrastructure bonds.

Cautious on the PHP, IDR and KRW
Expectations of better global growth and reflation could lead to higher oil prices, which is likely to result in wider trade deficits for Indonesia and the Philippines. The Philippines’ renewed focus on infrastructure spending, as the economy re-opens further, would also prompt imports to rise and place additional pressure on the peso. Meanwhile, we deem the KRW to be relatively more vulnerable to further US dollar (USD) strength and maintain our defensive view on the currency.

Asian credits register negative returns on the back of rising UST yields
The total return from Asian credits fell by 0.79%, as the impact from a sharp rise in UST yields was only partially mitigated by a 17.7 bps tightening of spreads. Asian high-grade (HG) credits underperformed their high-yield (HY) counterparts, declining 1.17%, despite spreads tightening 15.9 bps. In contrast, Asian HY returned +0.46% in the month, with credit spreads narrowing 25.9 bps.

Expectations of better growth and reflation were the main themes and drivers of financial markets in February. An improvement in US economic data, along with the prospect of meaningful additional US fiscal stimulus, raised markets’ growth expectations. Investors also projected the drag from COVID-19 to progressively ease, amid improving COVID-19 trends and further positive development on the vaccine front. Oil surged strongly on the back of a winter storm in Texas, before giving back some of the gains on concerns that the big chill could prolong outages of refineries and thus negatively affect demand. These factors pointing toward better growth spurred positive risk momentum. Towards the month-end, markets started pricing in a pick-up in inflation alongside higher probability of better growth, which somewhat negatively affected demand technicals for Asian credits.

By country, spreads of all major country segments ended tighter in the month. Indian credits outperformed, with spreads tightening about 32 bps. Demand for Indian credits was supported by the expansionary budget which the market took to be supportive of growth. Meanwhile, the narrowing in Chinese credit spreads was aided partly by news that consumption over the Lunar New Year holidays was stronger than expected. Meanwhile, Indonesian credits underperformed, with spreads ending just about 1 bp tighter, as long-dated Indonesian sovereigns and quasi-sovereigns proved highly vulnerable to the sharp rise in UST yields.

Primary market activity moderates due to the Lunar New Year holidays
Activity in the primary market quietened down in February, as Asia celebrated the Lunar New Year holidays. The HG space saw 25 new issues amounting to USD 15.39 billion, including the USD 5.0 billion four-tranche issue from Alibaba Group, and the USD 1.9 billion two-tranche quasi-sovereign issue from Indonesia’s Pertamina Persero. Meanwhile, the HY space had 18 new issues amounting to about USD 4.39 billion. 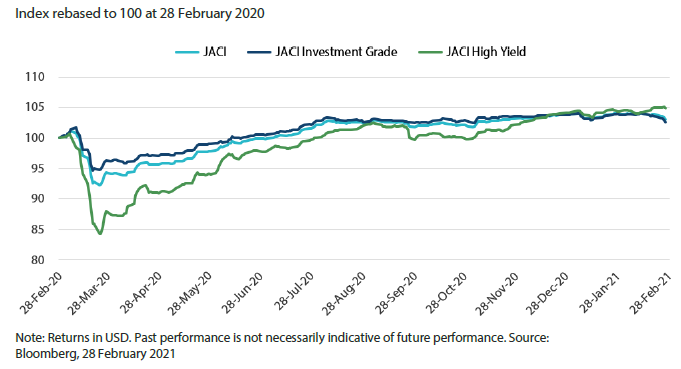 Asian credit spreads to remain resilient, though downside risks remain
Asian credit spreads are expected to have scope to tighten further over the medium-term, driven by the ongoing economic recovery, which lends support to overall corporate credit fundamentals. Credit supportive fiscal and monetary policies are expected to remain in place in most developed and Emerging Market (EM) countries, even if incremental easing measures are likely to moderate from here. Progress on vaccinations further reinforce the positive backdrop. We expect the re-opening of international borders in the second half of the year to provide a further boost to global economic activity, even though the pace of re-opening might be uneven among regions initially. That said, valuation is more neutral now, having priced in a lot of the improving fundamentals. Further spread tightening from here will be more laboured, with more frequent market pull-backs likely.

The key downside risk to Asian credits in 2021 is US-China bilateral relations failing to stabilise under the Biden administration. US president Joe Biden has repeatedly stressed multilateralism as a key foreign policy pillar, and there are hopes of US-China relations being reset after a tumultuous four-year period. However, the underlying technological and ideological tensions between the two countries could dash such hopes. In addition to geopolitical issues, a premature withdrawal of the accommodative fiscal and monetary policies currently in place is another downside risk that could derail the positive outlook for risk assets, including Asian credits. More recently, the reflation theme has gained momentum, leading to a sharp rise in developed market sovereign bond yields. While risk assets remain resilient for now, further sharp moves in base rates could begin to weigh on broader risk appetite.