Why Japanese equities are outperforming their developed market peers

We discuss the reasons behind the Japanese equity market’s recent outperformance and the factors likely required for the gains to be sustainable in the longer term. We also assess the recent surge by the Mothers Index and key points to watch going forward.

Why Japanese equities are outperforming their developed market peers

The Japanese equity market has held up relatively well over the past several months during the global market turmoil, with the Nikkei Stock Average outperforming its developed market peers. It would be tempting to conclude that factors specific to Japan, notably the country’s relatively low number of COVID-19 infections and deaths, give its market an edge. Such an argument, however, becomes less convincing when considering that savings prompted by precaution are increasing and consumption remains subdued, even though Japan has not experienced a second COVID-19 wave such as that currently afflicting the US and Europe. Rather, we believe that Japanese equities are supported by the fact that manufacturers form a significant component of the market. As such, the recent recovery by Japanese exports on the back of strong external demand—Chinese manufacturing, for example, has rebounded quickly— is more of a supportive factor for Japanese equities, in our view. The outperformance by Japanese equities therefore may not be based on particularly solid foundations as the market owes much of its gains to demand generated outside the country. A recovery by domestic demand in such areas as services and transport will be crucial for the equity market to keep its momentum going in the longer run. We are seeing nascent signs of a recovery in domestic demand, spurred in part by the government’s “Go To Travel” subsidy campaign. Such a recovery would likely enhance the allure of Japanese equities. And the delayed summer Olympic Games, if held as planned in Tokyo next year, may provide a further boost for domestic demand.

Analysing the recent surge by the Mothers Index

The Tokyo Stock Exchange’s (TSE) Mothers Index for Japanese start-ups has been on a roll this year. Boosted by strong demand for companies that are expected to perform well in the wake of the pandemic, such as biopharmaceuticals and technology start-ups, the Mothers rallied to a 14-year high in October, prompting a number of observers to point out that it is outperforming better-known indexes such as the NASDAQ. The surge by the index is fuelled by companies that are generating actual profits on one hand, and those rising on mere expectations of future profits on the other. Profit-generating companies on the Mothers are not unlike the GAFA stocks: they have a relatively clear growth path ahead. Companies rising on expectations of future profit alone, however, risk a quick reversal in fortunes if themes currently working in their favour, notably Prime Minister Yoshihide Suga’s digitization initiative, lose their appeal. Would-be investors also have to remember that most companies leave the Mothers and re-list on the TSE’s first and second sections once they become profitable entities. This is why an apple-to-apple comparison cannot be made between the Mothers and the NASDAQ. In the case of the Mothers, it is critical to carefully assess each company rather than draw conclusions based on the strength of the whole index.

The Japanese equity market fell in October, with the TOPIX (w/dividends) declining 2.84% on-month and the Nikkei 225 (w/dividends) falling 0.88%. From the beginning of the month, stocks rose on expectations for progress toward the passing of an additional stimulus package in the US to support the coronavirus-hit economy. However, concerns emerged from mid-month over the potential economic impact of stricter measures in Europe to combat a second surge of COVID-19 cases, while stimulus talks between the ruling and opposition parties in the US faced a stalemate, which led to greater uncertainty over the economic outlook. In addition, Japanese exporters faced worries that the rising yen against the US dollar would have a negative earnings impact. As a result, stocks finished the month lower. Of the 33 Tokyo Stock Exchange sectors, six sectors rose, with Marine Transportation, Insurance, and Metal Products posting the strongest gains. In contrast, 27 sectors declined, including Pharmaceuticals, Mining, and Land Transportation. 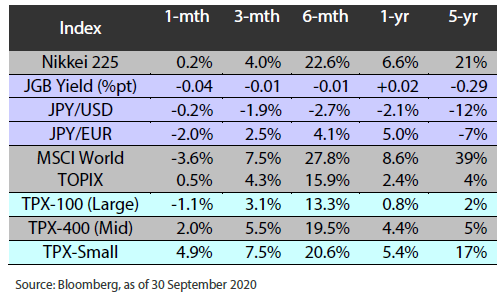 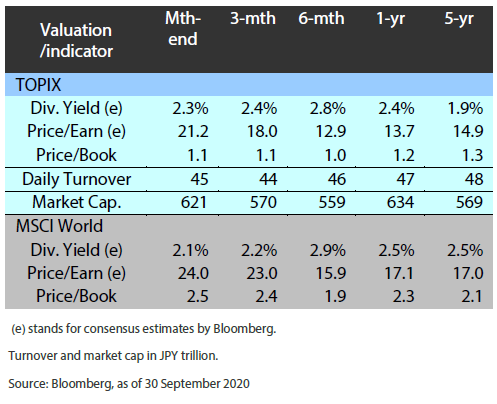 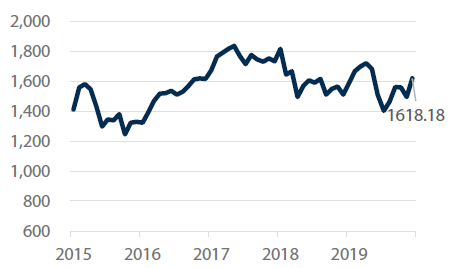 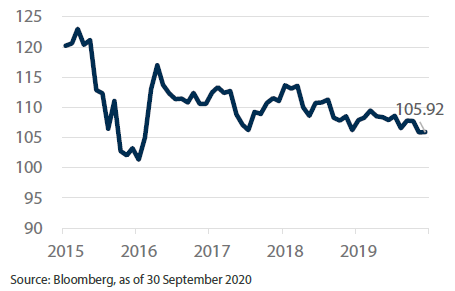