The Japanese equity market has posted impressive gains as 2020 draws to a close, with the Nikkei Stock Average reaching a near three-decade high, and we assess the rise from a long-term perspective. We also analyse how Japanese equities have managed to defy a stronger yen.

The Japanese equity market has been on an impressive run over the past month, with the Nikkei Stock Average rising to its highest level in nearly three decades. A factor behind the Japanese market’s gains, and those of the global markets as a whole, has been expectations of the development and rollout of COVID-19 vaccines. Hopes for government stimulus also gave the market an extra boost. In addition, expectations that non-contact business segments (such as teleconferencing and medical treatment providers) would enjoy growth in a “new normal” brought about by the pandemic have also supported the market.

While the aforementioned factors have certainly helped reduce risk premium in the market, they may not be enough to set equities on course for sustainable, long-term gains. Vaccines for COVID-19 are certainly positive. But although the vaccines could restore economic activity to previous levels, they may not be able to spur fresh economic growth. Government stimulus plans risk falling flat as increased government spending could end up reducing private sector spending. As for non-contact business segments, their growth through so-called digital transformation could come at the expense of fields such as land and air transport.

As such, the market will require an emergence of an entirely new demand source, in our view, if it were to stay on course for long-term gains. This would require continued economic growth to be accompanied by capital expenditure; otherwise, the market will remain vulnerable to shocks once and if the excitement over the vaccine and government stimulus fades.

Why Japanese equities have managed to brush aside a strong yen

The Japanese equity market has advanced despite the yen’s steady appreciation against the dollar. The greenback has fallen more than 4% against its Japanese counterpart in 2020, defying a long-held notion that a strong yen is negative (and a weak yen positive) for the stock market. The most recent example of this is when a weaker Japanese currency helped lift equities early in the “Abenomics” era. The series of economic policies dubbed Abenomics were launched late in 2012, along with the Bank of Japan’s massive monetary easing, which played a role in weakening the yen. The weaker Japanese currency expanded theoretical corporate profits, resulting in stock market-boosting growth in wages and bonuses.

However, while it may not have been obvious at the time, the correlation between the depreciating yen and stronger equities had begun weakening a few years into Abenomics. By that time, the rise of the equity market was driven more by a quantitative recovery by Japanese firms in the wake of the US-driven advance in the global markets. Under such conditions, Japanese exporters, which are considered vulnerable to a strong yen, had grown relatively immune to currency fluctuations.

The yen’s recent round of gains may have generated renewed interest in the relationship between currency levels and equities. But currently, we believe that a strong yen only has a limited impact on corporate profits as Japanese exporters have grown robust enough under the broader quantitative recovery. So long as the yen’s appreciation takes place in a narrow 100–105 yen per-dollar range, currency level fluctuations will only have a limited impact on corporate earnings, in our view.

The Japanese equity market rose in November, with the TOPIX (w/dividends) rising 11.14% on-month and the Nikkei 225 (w/dividends) climbing 15.05%. With COVID-19 cases on the rise, stocks were weighed down by growing concerns over the potential economic impact of pandemic-related restrictions. However, investor confidence recovered as uncertainty surrounding US politics eased after a Democratic win in the US presidential election, while Japan’s GDP data for the July-September quarter came in better than expected. Stocks also benefitted from news from drug makers regarding the high efficacy of their COVID-19 vaccines under development, bolstering expectations that a vaccine would soon come on the market. Of the 33 Tokyo Stock Exchange sectors, 32 sectors rose, with Iron & Steel, Marine Transportation, and Real Estate posting the strongest gains. In contrast, only Fishery, Agriculture & Forestry declined. 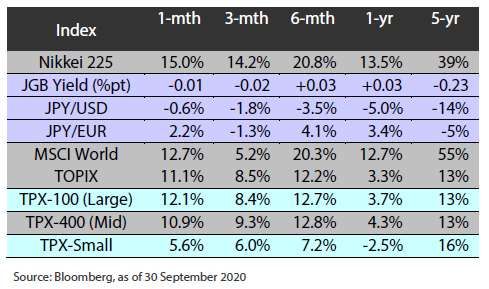 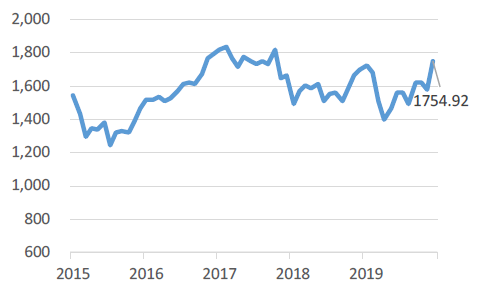 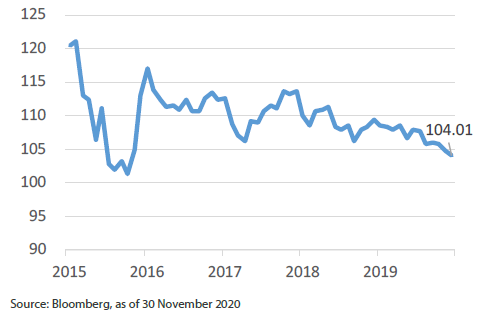