We look into the potential economic impact of Japan’s attempt to become carbon neutral. We also analyse why Japan’s fiscal condition draws little attention although the country is on course to spend a record amount in its upcoming budget.

Looking beyond hydrogen as Japan prepares to decarbonise

The Japanese government unveiled ambitious environmental plans in December, declaring its intent to make the country carbon neutral by 2050. A pillar of Japan’s attempt to decarbonise is hydrogen, with the government sharply raising its 2030 hydrogen usage target to 10 million tons from the initial goal of 300,000 tons. Such a vast increase has naturally raised hopes that hydrogen-related activity would stimulate the economy significantly and in turn benefit corporate sectors related to hydrogen.

While hydrogen might help push the Japanese economy forward in the post-COVID-19 era, there are several factors that need to be remembered. First, it may take many years before hydrogen can begin benefitting the economy. The private sector will need some time to follow the government’s lead and establish a functioning hydrogen energy structure, such as filling stations and networks of hydrogen-powered vehicles. Second, hydrogen is expensive relative to fossil fuels. The government can reduce its price through subsidies, but this only increases fiscal spending, straining government finances and acting as a drag on the GDP in the long term. Furthermore, economies of scale will be difficult to achieve with currently available technology; technological breakthroughs will be needed to turn hydrogen into an affordable fuel source.

As such, in the short term we may need to look beyond hydrogen when focusing on Japan’s decarbonisation. For example, electric vehicle (EV) technology appears well placed to enjoy economies of scale, which would make EVs more affordable and widespread. A vibrant EV sector could in turn trigger innovation in related areas, stimulate the economy and lead to a broader reduction in carbon emissions.

Why Japan’s fiscal discipline no longer attracts much attention

Not too long ago, Japan’s fiscal discipline (or perceived lack of) attracted much attention from the media and the markets. But when in late December the cabinet approved a record-high JPY 106.6 trillion draft budget for fiscal 2021, the proceedings hardly generated news headlines, which perhaps should be news in itself.

Japan needs to spend in order to stimulate the economy hurt by the coronavirus epidemic, and this is one reason why the government has evaded criticism for the record budget. Another key reason why fiscal discipline no longer generates much attention is because the markets have learned that despite increasing debts, Japan’s credibility has remained intact and a rise in government bond yields has been prevented. Instead of rising, government yields have actually declined over the past few years in Japan as well as in the US and Germany despite rising national debt, as the economic policies of these countries have been perceived favourably. The biggest change, however, in market views towards Japan fiscal conditions is that the Bank of Japan is now seen as the main controller of yields. The increased role of the central bank has meant that the markets no longer associate increases in fiscal spending with rising yields.

Fiscal discipline, therefore, may only become an issue again in the indefinite future. This could take place when the non-discretionary parts of government spending (e.g. for social welfare) becomes too large vis-a-vis the discretionary portions (e.g. for fiscal stimulus). If yields rise, this too could push fiscal discipline to the forefront again. But even if yields do rise, the phenomenon is unlikely to generate fiscal concerns if the government simultaneously enjoys increasing tax revenues. And the government could see its tax revenues increase over the next several years if Japan enters a period of recovery from the pandemic.

The Japanese equity market rose in December, with the TOPIX (w/dividends) rising 2.97% on-month and the Nikkei 225 (w/dividends) climbing 3.95%. The market faced some periods of weakness as the discovery of a more infectious strain of COVID-19 spurred concerns that an economic recovery could be delayed. However, such concerns were allayed by the Bank of Japan’s latest quarterly Tankan business survey showing an improvement in business sentiment and on growing expectations that the COVID-19 crisis would ease after the US and Europe began rolling out vaccinations. In addition, Japanese stocks were bolstered by a rally in US equities on hopes that the US’s additional stimulus package would provide further support to an economic recovery. Of the 33 Tokyo Stock Exchange sectors, 28 sectors rose, with Nonferrous Metals, Pulp & Paper, and Marine Transportation posting the strongest gains. In contrast, five sectors declined, including Rubber Products, Air Transportation, and Services. 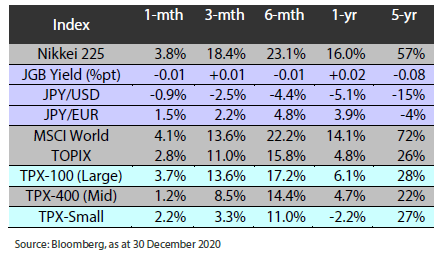 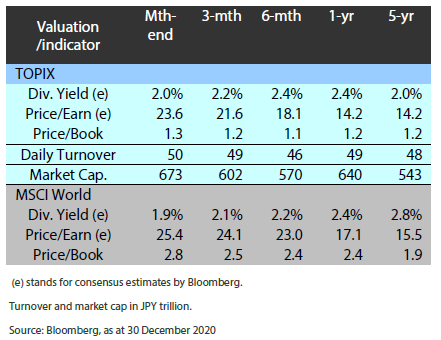 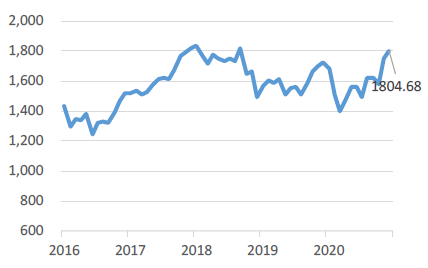 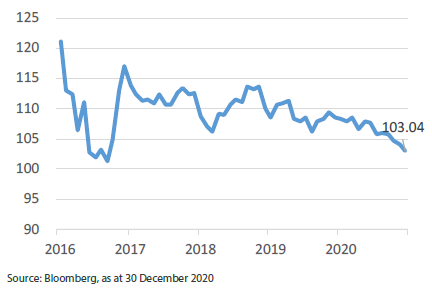