As China’s fixed income market continues to grow in depth and size, it has helped create interesting trends that are worth following. While some of these trends are not new, we do see finer developments within that could pique investor interest in realising additional alpha.

China's fixed income market has continued to grow; last year, it overtook Japan, becoming the second largest market globally. In addition, some investors already see China as a large, individual market that is separate and distinct from traditional emerging markets. 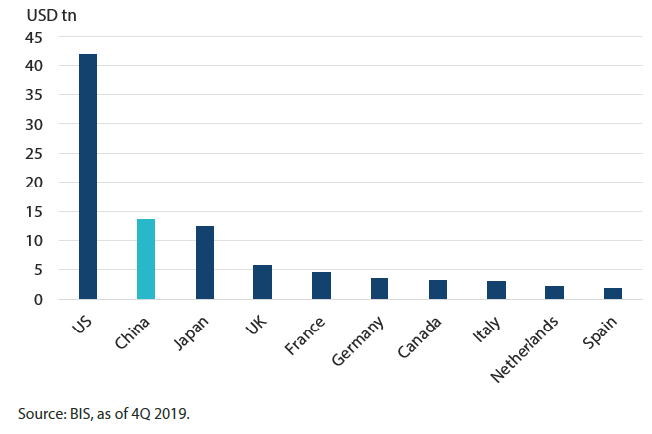 The rapid growth in China’s fixed income market is due to its relatively lower correlation with other G3 markets, and recognition of the Renminbi (RMB) as a reserve currency. With China's growth having a meaningful impact on other countries, the country’s fiscal and monetary policies are key areas which investors focus on. This is particularly so because its growth cycle can be in a different phase versus other markets. For example, in 2018, China was facing a slowdown due in part to the deleveraging campaign, and the US-China trade war, which had a negative impact on credit growth and sentiment. As such, China’s policymakers were easing policies in 2018 to stimulate the economy, while the US was in a hiking cycle. Additionally, this year, China was the first to feel the negative impact of the COVID-19 pandemic and also the first to rise out of the trough. As such, policymakers have been easing restrictions aggressively ahead of others. For instance, the emergency easing measures that we have seen since May have been rolled back ahead of other countries. Forging ahead of other countries has weakened China’s correlation with other markets and boosted its potential diversification benefits.

Chart 2: Correlation of the Global Aggregate Bond Index to other country bond indices 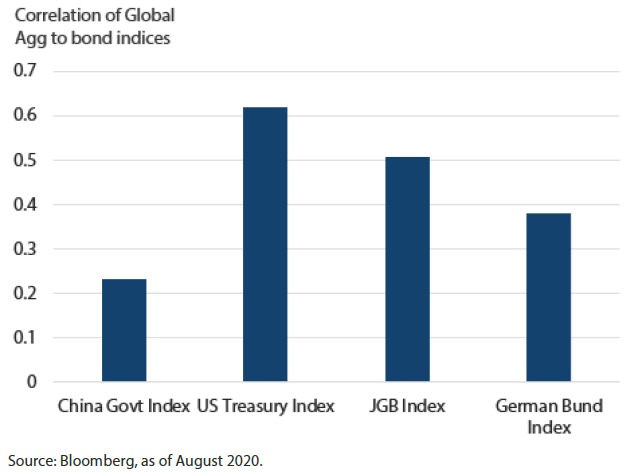 Separately, in light of China’s reserve status and index inclusion, foreign investors are just beginning to become more familiar with the country’s fixed income market. Foreign ownership as a proportion of Chinese Government Bonds (CGBs) and Policy Financial Bonds (PFBs) has risen in the last five years to 9.1% and 4.3%, respectively. Taken against the whole market, however, foreign ownership of all bonds is only slightly above 2%. Thus, we see room for further expansion of foreign participation. In our view, it will only be a matter of time before investors start to move down the credit curve in the onshore market in search of credit products that offer yield.

We have identified several trends to watch in China's fixed income market over the next five years; although some of these trends are not new, we do see finer developments within that are worth following.

The first trend is the continuing expansion of the local municipal market, which has become an important source of financing for local governments that require funds to support growth. The government has been cracking down hard on local governments’ shadow sector financing and off balance sheet financing, while encouraging transparency and lower financing costs by issuing in the bond market. While the market has grown in the past few years, there is still room for further expansion as local governments use the bond market as an effective way of financing themselves and terming out the maturity. For example, in the first few years of the debt swap, issuance tended to be evenly spaced out in the maturity buckets with less long-term issuance due to liquidity concerns and pricing issues. In the last couple of years, we have seen the lengthening of maturities as issuers match projects and take advantage of the low-rate environment.

The municipal market will be an important segment to monitor given that it is larger than either the CGB or PFB segments. Thus, the technicals (i.e. supply and valuations) and transformations (i.e. regulatory or tax regimes) within this segment will drive demand for the other two segments. 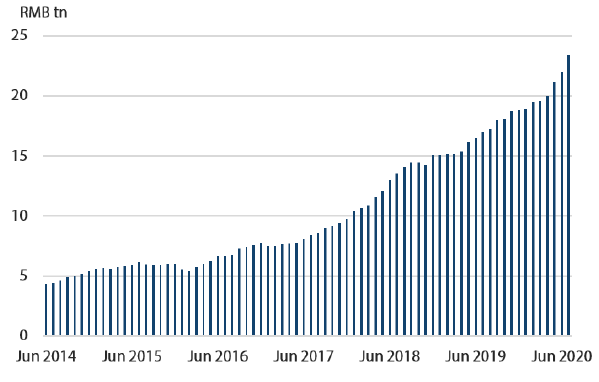 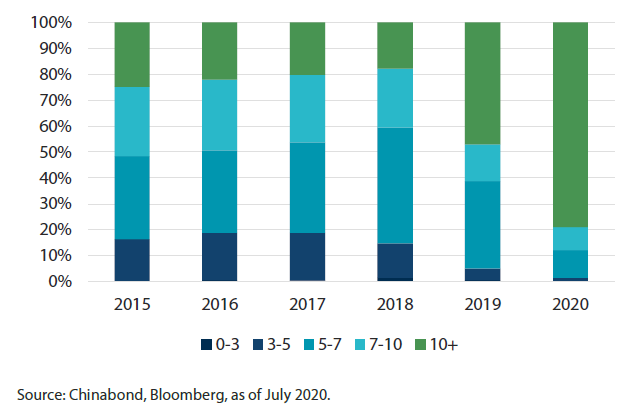 The second trend is the continuing development in the corporate credit market. Investors are already familiar with some Chinese credits, with a sliver of these being issued in the US dollar (USD) offshore market. As access to onshore markets is simplified further, the differences in value between similar credit names in the onshore and offshore markets can be a source of alpha, given potential differences in the onshore and offshore dynamics.

In addition, the opening up of China’s markets to foreign entities (i.e. the limitation on foreign ownership in securities and fund management firms have been scrapped) will enable further information flow, which will in turn facilitate and deepen understanding of China’s markets. On the liquidity front, regulators have also tried to amalgamate the interbank and exchange markets. This will enhance trading liquidity and encourage investor participation. 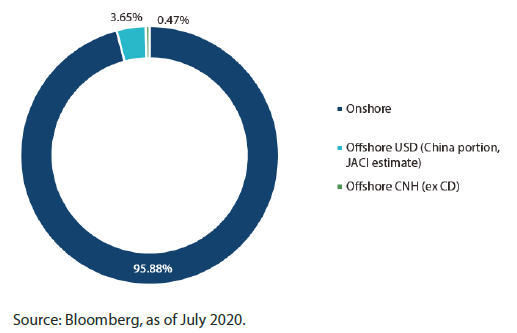 We are also seeing credit differentiation despite the large number of AAA credits onshore. Investors have become more discerning and market pricing is starting to reflect the embedded risk. For example, the weaker provinces, such as Shaanxi and Yunnan Local-Government Financing Vehicles (LGFVs), have relatively wider credit spreads versus their counterparts such as Guangdong LGFVs. 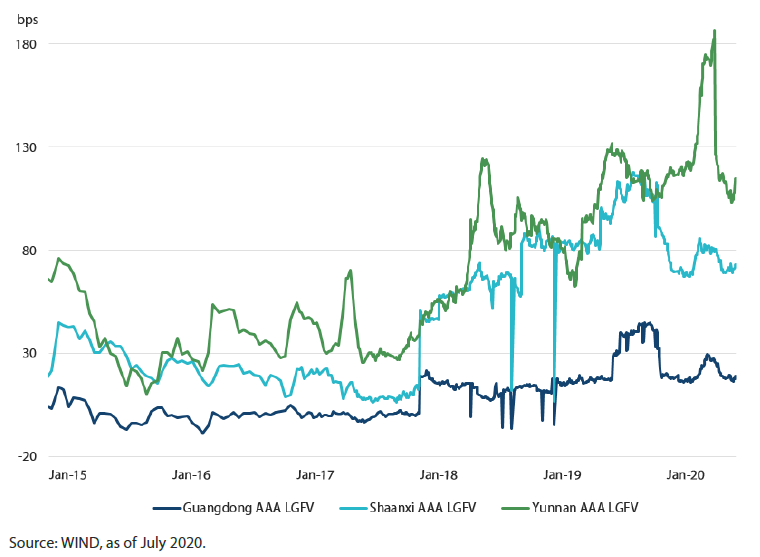 The LGFVs in new economic areas are also viewed more sceptically versus more established provincial or city LGFVs. It is still at an early stage and a universal route does not exist, but in some cases we have seen the following developments:

Now that price discovery is finally taking place outside the realm of macro and liquidity conditions, it will start to drive capital allocation. The ability to pick creditworthy names through research and analysis will also gain importance.

The third trend is the rapid growth in asset securitisation over the last few years. Not only has volume increased significantly, but the variety of Asset Backed Securities (ABS) has also grown. These include the shorter-dated and relatively safer products such as the auto ABS on one side of the spectrum, and the longer-dated products such as the Residential Mortgaged Back Securities (RMBS) on the other. In between, there is a proliferation of riskier types of ABS such as consumer-related or corporate-related loans.

Chart 7: Outstanding ABS in the market 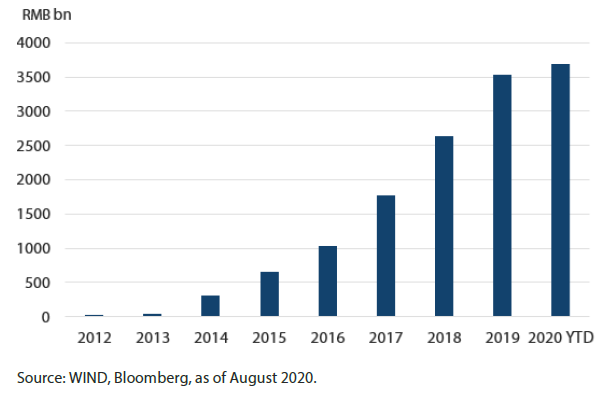 Chart 8: Types of ABS in the market 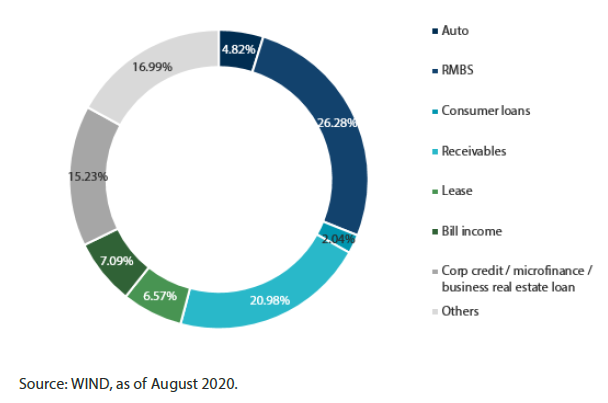 In the next few months, the government will launch infrastructure Real Estate Investment Trusts (REITs), which are also a form of securitisation to transform illiquid infrastructure assets on bank books into more efficient use. While infrastructure REITS are different instruments from ABS and lean towards the equity spectrum, their recent launches highlight the government's policy direction. Securitisation will help channel personal savings and private capital into infrastructure projects without overstretching already debt-laden local governments. As such, we think that securitised assets will be a key market that is large enough for investors seeking for alternatives in the region, as it provides diversification and yield pick-up from plain vanilla rates or corporate credit.

As a final observation, there remains many nascent trends worth watching in China’s fixed income markets: financial bonds within the capital structure, such as seniors, T2s, and perpetuals, continue to be issued to sustain bank lending; green bonds following the ESG concept through which China is aiming to improve the quality of its growth vs just quantity; panda bonds which could one day serve the global community seeking financing onshore; and the distressed market, given the markets’ need to dispose of non-performing loans and default situations. These are currently niche markets but are nonetheless interesting developments which could help investors realise additional alpha and pique their interest in the next few years.