UST yields rise in October
The month opened to data suggestive of an improving labour market, as jobless and continuing claims drifted lower, exerting upward pressure on UST yields. The US presidential election and the fiscal stimulus deal were the focal points of news headlines and the markets in October. Financial markets initially warmed up to the idea of an economic bounce should the Democrats win both the Senate and the White House. This, alongside hopes of a forthcoming fiscal stimulus deal, prompted risk assets to rally and yields to move higher. Mid-month, the suspension in another COVID-19 vaccine trial in the US, and mixed economic data that flagged the risk of deceleration in growth pushed yields lower. The decline in yields turned out to be brief, however. Renewed optimism that the White House and the Congress could find common ground on a stimulus package before the elections caused yields to resume the climb shortly after, causing the curve to steepen. That said, worries about the acceleration of COVID-19 cases in the US and Western Europe, as well as renewed lockdowns in the latter, partially offset the upward pressure. Overall, the benchmark 2-year yield ended 2.6 bps higher at 0.155%, while the 10-year yield rose 19 bps to 0.875%. 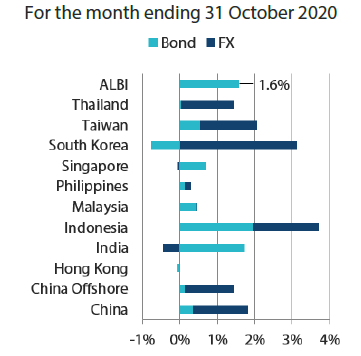 Inflation picture across Asia mixed in September
Headline consumer price index (CPI) prints rose in India, South Korea, Indonesia and Singapore, were unchanged in Malaysia, and moderated in China, Thailand and the Philippines. India's CPI accelerated to 7.34% year-on-year (YoY) in September, due largely to rising food prices. Similarly, the slight increase in Indonesia's annual inflation rate was driven partly by higher food prices. In Singapore, headline CPI was 0.0%, rising from -0.4% on the back of higher transport costs. Meanwhile, headline inflation resumed declining in Thailand after three consecutive months of increases; low energy and electricity bills contributed to the 0.7% YoY decline. Separately, the moderation in China's CPI was prompted mainly by plunging pork price inflation. Elsewhere, inflation in the Philippines dipped, as slower price gains of select food items weighed on the headline number.

Singapore, South Korea and China return to growth in the third quarter
China reported that its third quarter GDP had expanded 4.9% YoY. Although the headline number printed below consensus, September activity data revealed solid growth momentum in economic activity. In Singapore, preliminary data revealed that its GDP in the third quarter shrank at a slower pace of -7.0% compared to -13.3% in the second quarter. According to the monetary authority, this is an "immediate rebound", and growth momentum is likely to be "modest" going forward given the "sluggish external backdrop, persistent weakness in some domestic services sectors and limited recovery in the travel-related sector". Elsewhere, South Korea's economy shrank 1.3% over the same period, following a 2.7% decline in the second quarter.

PBOC lowers the risk reserve ratio for FX forward transactions and relaxes yuan pricing mechanism
The central bank lowered the risk reserve ratio for FX forward trading to 0% from 20%, effective 12 October. In addition, it declared that it would maintain Chinese yuan (CNY) stability at a reasonable equilibrium level and stabilise market expectations. Notably, the move followed a meaningful appreciation in the CNY after the Golden Week holidays. Separately, the PBOC Governor reiterated that the central bank will maintain "normal" monetary policy for as long as possible and noted that plans to encourage a "reasonable" increase in household savings and incomes will be made. Towards the month-end, the China Foreign Exchange Trade System announced that some local banks stopped using the Counter-Cyclical Factor (CCF) in setting the CNY daily reference rate, allowing the currency to be more market driven. The CCF was introduced in May 2017 and was primarily used in managing Renminbi (RMB) depreciation risk.

RBI introduces bond-supportive measures anew; government announces increase in government borrowing
The Reserve Bank of India (RBI) unanimously voted to leave policy rates unchanged in October. That said, it provided an exceptionally strong forward guidance that the bank's accommodative stance will be maintained "as long as necessary—at least during the current financial year and into the next financial year." In addition, the central bank announced additional liquidity steps including raising the size of open-market purchases, purchases of state debt and supporting corporate bonds via long-term repo operations. Separately, the government declared that central government borrowing will increase by Indian rupee (INR) 1.1 trillion in the second half of the current fiscal year, to help cover the compensation shortfall amid the slowdown in tax collection as a result of the pandemic. It also announced further fiscal stimulus measures in the month, which included cash payments to public sector employees and interest-free advances to central government employees, as well as interest-free loans to state governments and enhanced central government spending.

China unveils 14th five-year plan; Indonesia passes omnibus law; Malaysia imposes movement restrictions anew
At the month-end, China unveiled the outline of its goals for the 14th five-year plan following a four-day meeting of the Communist Party's Central Committee. Self-reliance was a key theme and technical innovation was emphasised as having a core role in the country's development. The communique refrained from mentioning an explicit pace for GDP growth, but stressed the need for sustainability and pledged to develop a robust domestic market. The statement also declared that the country will continue to open up its economy and take it to a "higher level." More details are expected from the respective ministries in early November. In Indonesia, the government passed the long-awaited omnibus bill. Among other things, the law simplifies business permits and land acquisition processes, and eases foreign ownership requirements. Markets are largely expecting an improvement in the country's overall business climate with the passage of this law. Elsewhere, the Malaysian government announced curbs on certain activities anew in Kuala Lumpur, Putrajaya as well as the state of Selangor following the recent surge in the number of COVID-19 cases.

Favour bonds with high carry
We believe the key factor to sustain the positive risk tone post-US election is the outcome of the Senate races, as this would heavily weigh on what the next president may or may not be able to accomplish in office. Should Democrats win both the Senate and the White House, we believe risk sentiment would be supported. In contrast, markets could see some short-term weakness in the event of a divided Senate.

Overall, we favour countries with high carry such as Indonesia, where flows have begun to return. Low inflation and flush onshore liquidity with Bank Indonesia managing the open market operations rate lower further support our positive view on the space.

Asian currencies expected to appreciate against the USD in the medium-term
In the medium term, we expect Asian currencies to appreciate against the USD, with the CNY, KRW, and Singapore dollar—being relatively more trade-sensitive—outperforming. The Malaysian ringgit and Thai baht may lag peers, on the back of rising political risk in their respective countries, whereas the Indonesian rupiah is likely to perform comparatively better as it benefits from Emerging Market (EM) inflows.

Evolving expectations on the looming US presidential election and the additional fiscal stimulus deal were the focal points of headlines and markets in October. The first half of the month opened to financial markets warming to the idea of an economic bounce if the Democrats won both the Senate and the White House, reinforcing positive risk tone. This, alongside hopes of a forthcoming fiscal stimulus deal and encouraging economic data from China, supported the compression in spreads in the first half of the month. This positive risk momentum, however, was reversed following the suspension of another COVID-19 vaccine trial, mixed economic data that flagged risk of a deceleration in US growth, as well as continuing stalemate in the US fiscal negotiations. These factors, together with worries about the re-acceleration of COVID-19 cases in the US and Western Europe, the latter leading to renewed lockdowns, sparked a sell-off in US and European equity markets, and a modest widening in credit spreads. Throughout the month, technicals for Asian credit remained strong with positive EM hard currency bond fund flows, which helped to offset the equally robust supply during the month.

All major country segments, save for Thailand, saw spreads tighten in October. Lower oil prices, together with increasing uncertainty in Thailand’s economic outlook as anti-government protests intensified, were factors that contributed to the underperformance of Thai credits. Within Chinese credits, sentiment towards HY property credits continued to be weighed down by idiosyncratic risks pertaining to Chinese property developer China Evergrande. Sri Lankan bonds sold off as investors trimmed high beta positions ahead of any global tail risk. Renewed political instability and extension on the Conditional Movement Control Order in key states resulted in some widening in Malaysian credit spreads. Meanwhile, Indonesian credits were relative outperformers, as markets reacted positively to the passage of the long-awaited omnibus bill. 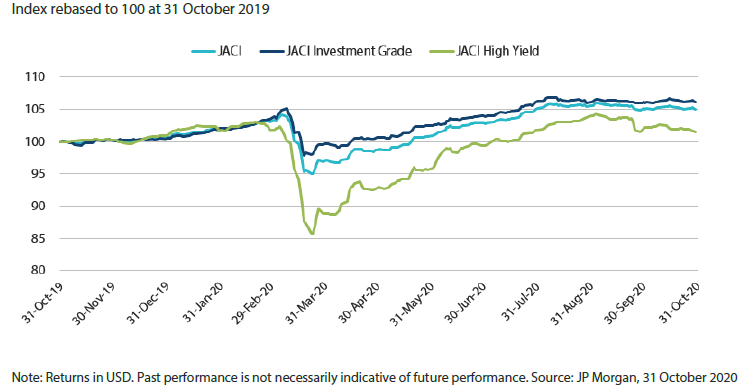 Asian credit spreads to continue its slow grind tighter, though downside risks remain
Asian credit spreads are expected to continue tightening slowly over the medium-term. Most Asian economies have likely seen the worst of the economic downturn in 2Q 2020, and high-frequency indicators suggest a recovery is underway, lending support to overall corporate credit fundamentals. Credit-supportive fiscal and monetary policies are also expected to remain in place in most developed and EM countries, even if incremental easing measures are likely to moderate from here. Progress on vaccines development and better treatment for COVID-19 cases further reinforce the positive backdrop.

Nevertheless, given the sharp rally in credit spreads over recent months, the pace of tightening should slow with more regular episodes of market pull-backs. Broad risk sentiment and direction of credit spreads for the remainder of the year are likely to be determined by events and developments in the early part of November, with uncertainties relating to the outcomes of these events having intensified. Notably, the outcome of the US election, for both the presidency and control of the Senate, is likely to have profound implications for the US and global economy, as well as global geopolitics and trade prospects in the years to come. The narrowing of the US election polls in the final stretch has raised uncertainties on this front. The resurgence of COVID-19 infections, particularly in Europe and the US, is also adding to the near-term uncertainties. The effectiveness of recently introduced containment measures in flattening the virus curve as well as anticipated preliminary results from Phase III vaccine trials, will be important drivers of risk sentiment as we head into 2021.