The UST yield curve steepens slightly in December
The UST yield curve steepened in December, with the UST 10-year bond yield rising 7.5 bps to 0.915%, while the 2-year bond yield fell by 2.7 bps to 0.122%. Concerns in the month revolved around rising COVID-19 cases in Europe, particularly in the UK, and over the uncertainty of fiscal stimulus in the US. The US Federal Reserve (Fed) maintained a dovish tone in December, while promising to continue their asset purchases at least at the current level until there was "substantial further progress" towards their target. The committee also talked down inflation concerns, while adding assurance about aiming for a soft landing when the time came to taper. Asian currencies continued their strength over the US dollar (USD) in December, despite giving up some gains during middle of the month on concerns over new virus strains in Europe. 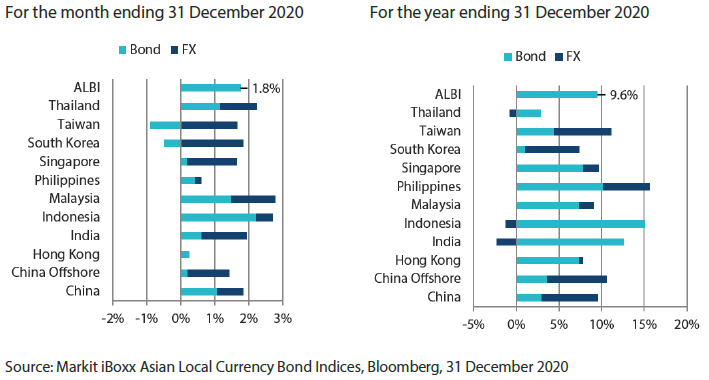 Inflationary pressures mixed in the region
Within the region, consumer price index (CPI) inflation readings were mixed. China's inflation dropped to -0.5% year-on-year (YoY) in November after a 0.5% rise in the prior month, on the back of falling food prices. India's inflation also fell slightly to 6.93% from 7.61% previously, as vegetable prices eased. In Thailand, consumer prices fell 0.4%, which was a less pronounced drop than October's 0.5% decrease. Meanwhile, Singapore's core CPI ticked up slightly to -0.1% from October's -0.2%, although the price drop had been quite sustained throughout 2020. The Philippines' headline inflation jumped to 3.3% in November from 2.5% in October.

Asian central banks opt for policy stability in December
Several central banks in Asia opted to keep rates unchanged in December. After cutting policy rates in November, Bank Indonesia (BI) chose to keep the 7-day reverse repo rate at 3.75%, in line with consensus. BI is of the view that the policy rate is still supportive of recovery and macroeconomic stability. Also, BI expects current account deficit to stay manageable in 2020 and 2021. In the Philippines, Bangko Sentral ng Pilipinas (BSP) kept the policy rate unchanged at 2.00%, in line with expectations. BSP maintained its stance that current policy settings are "appropriate". Governor Diokno stated that preliminary Q4 data and mobility indicators show early signs of a rebound in activity. Bank of Thailand (BOT) also kept its key interest rate unchanged at 0.50%. Similar to the previous meeting, the statement noted that the decision to maintain the interest rate was "to preserve the limited policy space in order to act at the appropriate and most effective timing" and underlined that monetary policy "must remain accommodative. The BOT upgraded its 2020 real GDP growth forecast to -6.6% from -7.8% previously but downgraded its 2021 growth outlook to 3.2% from 3.6% previously. The downgrade to 2021 growth was mainly due to a downward revision in foreign tourist arrivals, on potential delays in border re-opening and a renewed local lockdown after the recent spike in virus cases.

Fitch downgrades Malaysia's rating to BBB+
Fitch Ratings downgraded Malaysia's long-term foreign currency issuer default rating to “BBB+” from “A-”, with a “stable” outlook. According to the credit rating agency, the depth and duration of the pandemic have weakened some of the country's key credit metrics. In addition, it said prospects for further improvements in Malaysia's governance are uncertain, given the thin majority of the current government, although Fitch said the government had continued to implement transparency-enhancing measures launched under the previous coalition. Fitch stated that the deterioration in governance and continued political uncertainty could dampen investor sentiment and constrain economic growth.

Positive on Indonesian bonds
We anticipate the combination of growth recovery supported by vaccine availability and still dovish Fed to support overall positive risk tone in markets. This should also prompt increased flows into EM, including Asia. We expect Indonesian bonds to outperform on an intra-Asia basis, as markets favour local currency debt that offers higher carry. With the rupiah starting to gain strength, BI has resumed easing of monetary policy. We do not rule out further rate cuts by the central bank to support growth. Slow growth, further monetary policy easing, and increasing EM inflows, in our view, should support the continued outperformance of Indonesian bonds.

Positive on SGD and RMB
We expect Asian currencies to appreciate against the USD, with the SGD—being relatively more trade-sensitive—outperforming within the ASEAN complex. We expect the further roll out of vaccine to improve risk sentiments gradually. We are also positive on the RMB, as we expect US-China relations to improve under the Biden administration. Together with trade recovery, these factors could lift risk sentiment positively, and thus support the yuan.

Asian credits tightened in December as investors looked past the continued increase in new COVID-19 cases across many countries, especially in the US and Europe. The market is pinning hopes on a rapid return to normalcy, with vaccine approvals progressing apace globally and actual vaccinations starting as early as late December in certain developed countries. US fiscal stimulus discussions also took a favourable turn, and after further wrangling over the course of December, a relief package worth USD 900 billion was finally agreed. This should help provide much needed support, as the most recent jobs data signalled that the US economic recovery had stalled somewhat. Over in China, November’s manufacturing data was better than expected, coming in as the highest reading since December 2010. Nevertheless, the good economic data was overshadowed by more news on the US executive order banning investments in Chinese firms deemed to be owned or controlled by the Chinese military, and the delisting of certain Chinese companies from US stock exchanges. Meanwhile, demand technicals for Asian credits continued to improve in December. Reduced political uncertainty and vaccine optimism supported robust inflows into EM hard currency bond funds.

Improved market sentiment prompted spreads of all major country segments to end tighter. India led the spread tightening, while lower beta countries and regions such as South Korea and Hong Kong underperformed. Sentiment towards Chinese credits was initially negatively affected by the renewed escalation in US-China tensions but moderated in the second half of the month as regional demand picked up.

Primary market activity moderates
New issuances for Asian credit slowed down in December going into the year-end. The HG space saw six new issues amounting to about USD 6.85 billion, including a USD 2.75 billion multi-tranche Republic of Philippines sovereign bond issue. Meanwhile, the HY space had 22 new issues amounting to about USD 6.4 billion. For the year, the total issuance was around USD 325 billion, with HG accounting for around 67% of the total. This exceeded the total issuance in 2019, which came in at more than USD 298 billion. 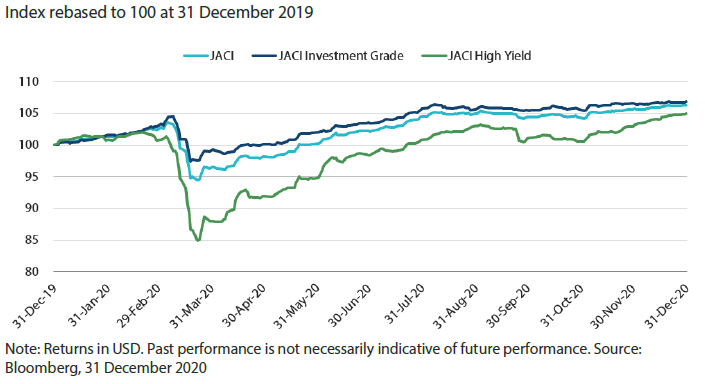 Asian credit spreads to continue tightening slowly, though downside risks remain
We expect Asian credit spreads to tighten gradually over the coming months. High-frequency indicators suggest a recovery is underway in most Asian economies, lending support to overall corporate credit fundamentals. Credit supportive fiscal and monetary policies are also expected to remain in place in most developed and EM countries, even if incremental easing measures are likely to moderate hereafter. Progress on vaccine development and better treatment for COVID-19 cases further reinforce the positive backdrop. The technical backdrop is also favourable with inflows to EM hard currency bond funds expected to remain robust. That said, valuation is no longer cheap given the sharp rally in credit spreads over recent months, and we expect more regular episodes of market pull-back going forward.

In our view, the key downside risk to Asian credits in 2021 is US-China bilateral relations failing to stabilise under the Biden administration. US president-elect Joe Biden has repeatedly stressed multilateralism as a key foreign policy pillar, and there are hopes of US-China relations being reset after a tumultuous four-year period. However, the underlying technological and ideological tensions between Washington and Beijing could dash such hopes. In addition to geopolitical issues, a premature withdrawal of the accommodative fiscal and monetary policies currently in place is another downside risk that could derail the positive outlook for risk assets, including Asian credits.