All other countries
Download as PDF
by Brett Winton, Director of Research, ARK Invest

During the fourth quarter, the MSCI World Index, S&P 500 and NASDAQ posted their weakest results since late 2008, pushing valuations to their lowest levels since 2014. Among the fears continuing to unnerve equity markets were slower economic growth globally, trade tensions, Fed tightening, and a flattening yield curve. Exacerbating concerns was a loss of momentum in several US economic indicators - among them housing, autos, and manufacturing - which fueled the arguments of those fearing or forecasting a deflationary bust.

Yet, while forecasters may argue that the flattening yield curve is a harbinger of recession and confirmation that the Fed has overstayed its welcome on the tight side of monetary policy, ARK believes that it is discounting the early stages of a deflationary boom, the likes of which have not been seen since the turn of the nineteenth century. During the next few years, particularly if trade conflicts are resolved with lower tariffs globally and more intellectual property protection in China, ARK’s stance is that real growth and profits around the world will surprise on the high side of expectations as inflation drops to surprisingly low levels. Led by the US, short rates should continue to rise this year in response to strong and accelerating real growth, while long rates are tamed by continued surprises on the low side of inflation expectations.

Counterintuitively, innovative companies often gain significant market share during tumultuous times because their products and services are better, cheaper, faster, or novel. Nonetheless, their shares are hit disproportionately in the early stages of a correction because they tend not to be significant positions in the broad-based indexes to which many investors flock during times of turmoil. That said, they typically recover much faster than many of the value traps that populate the traditional indexes. A good example from 2008 to 2010 was Salesforce.com (CRM), which was not in most broad-based indexes. Chief Technology Officers at that time were told to cut their budgets by 20% to 30% so they had no choice but to do things differently: they moved away from the enterprise license/maintenance model to ‘pay as you go’, the software-as-a-service (SaaS) model. While technology spending dropped 20%+, Salesforce.com’s worst quarter during and after the Great Financial Crisis sported 20%+ revenue growth! Hard hit in the early phase of the market’s decline, Salesforce.com came out flying. Truth does win out once the emotional reaction - and the race back to benchmarks - ends.

A look back at past innovation

History is replete with examples of businesses and consumers ignoring or dismissing big ideas, particularly those associated with disruptive innovation. In 1876, for example, when Alexander Graham Bell was granted the official patent for the telephone, many businesses dismissed it as irrelevant or insignificant. Famously, Western Union took a pass on buying the patent. Likewise, many considered the automobile just a curiosity or a fad. In 1899, The Literary Digest magazine summarised the prevailing response in this way: “The ordinary ‘horseless carriage’ is at present a luxury for the wealthy; and although its price will probably fall in the future, it will never, of course, come into as common use as the bicycle.”

Despite its potential, innovation typically needs time and maturity before gaining mass market adoption. Consequently, with a focus on benchmarks, sectors, and short-term performance, traditional investment managers often minimise or misunderstand its potential.

Through an open research process that cuts across sectors, industries, and markets, ARK seeks to identify innovation platforms with dramatic cost declines, strong price elasticity of demand, and convergence which spawns further innovation. Today, ARK believes that artificial intelligence, energy storage, robotics, genome sequencing, and blockchain technology are the innovation platforms leading the global economy into what could be the most transformative period in history.

While ARK expects each of these innovation platforms to create multiple trillions in market capitalisation, the deflationary boom that they are creating, particularly as they converge, is throwing off the meaning of certain economic signals, importantly the yield curve. Today, equity markets fear the impact of a ‘bearish flattening’, but ARK believes that a ‘bullish flattening’ is underway as technologically-enabled innovation platforms and productivity gains evolve into a ‘deflationary boom’. During the 50 years ended 1929, the yield curve was inverted more than half of the time as the disruptive innovation platforms of that day – the automobile (internal combustion engine), telephone, and electricity – unleashed periods of extraordinary real growth at low rates of inflation. The steepest inversions occurred during periods of the most rapid growth in real GDP. ARK would not be surprised to see this seeming ‘disconnect’ repeat during the next few years, but investors will have to extend their time horizons and their understanding of economic history to understand the economic impact of these profound technological breakthroughs.

The first wave of software on PCs disrupted a handful of industries. The Internet wave expanded the reach of software beyond the computer industry, creating new tech giants. We believe that artificial intelligence, in particular deep learning, is the third wave of software eating the world.

We define artificial intelligence as computational systems and software that evolve by taking in data. These systems have the power to solve seemingly insoluble problems, automate knowledge work, and accelerate technological integration into all economic sectors and processes. 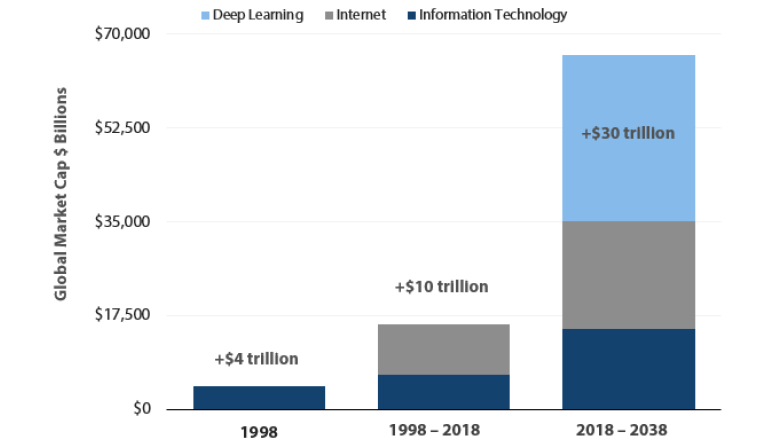 Batteries have entered a virtuous cycle: the cost of goods is falling, stimulating unit demand growth which, in turn, is pushing batteries further down the cost curve. ARK forecasts that electric vehicle sales will rise from roughly 1.3 million in 2018 to more than 26 million in 2023.

Thanks to the growth in electric vehicles sales, battery costs should drop to a point where utility-scale energy storage becomes attractive, enabling a multitude of new applications. We believe these new applications, including electric vehicles, micro-mobility and aerial systems such as flying taxis, will enable business model innovations and transform city landscapes.

These innovations should drive demand for electrical energy at the expense of liquid fuel, and provide the mechanism by which electrical energy can be provisioned more efficiently, thereby reducing grid vulnerability, operational expenses, and transmission and distribution capital intensity. We project that automotive manufacturers and their suppliers will be negatively impacted, the energy sector will face peak oil demand, and mobility and utility infrastructure will be forced to adapt.

Next-generation DNA sequencing (NGS) is the driving force behind the genomic revolution. DNA sequencing costs are dropping dramatically. Since 2003 the cost to sequence a whole human genome has dropped from nearly $3 billion to less than $1,000. ARK believes that as costs continue to drop, sequencing could become the clinical standard of care, introducing more science and knowledge into health, agriculture, disease, and drug discovery.

While sequencing allows us to understand where mutations are happening within DNA, CRISPR, a powerful genome-editing tool, allows us to correct the mutations inexpensively and precisely. We believe CRISPR has the potential to shift health care from treating symptoms to curing diseases like sickle cell anemia, cystic fibrosis, pediatric blindness, and cancer. Our research shows that 1 in 100 live human births results in a monogenic disease, but only 5% of the 10,000 monogenic diseases respond to any treatment today. CRISPR should address all monogenic diseases, potentially generating $75 billion in global revenues per year. If CRISPR were to address individuals already living with monogenic diseases, its one-time global addressable market would be $2 trillion.

These technologies extend beyond healthcare. For example, by 2025, CRISPR could expand the agricultural market by an estimated $170 billion, sustaining projected growth in the global population. The pollution caused by anthropogenic use of land and sea can be mitigated by genomic technologies, enabling sustainable farming, particularly in meeting aquaculture demand for an increasingly diversifying global diet.

Robots are increasing their footprint and creating jobs. Collaborative robots are designed to work alongside humans and are retrained easily, adding to labor productivity. As the unit costs of robots decline by over half, and the capability-set and ease-of-training increase, robots should proliferate across sectors, thereby transforming every business that depends upon physical processes and workflows. Though fears about impacts on employment are widespread, they are likely to prove unfounded as robots help drive labor productivity and lower unit economics, transforming non-market activities - such as food prep and grocery shopping - into priced services.

Outside of the workplace, we believe autonomous vehicles are robots that fundamentally will change the economics of physical movement, reducing the cost of taxis, delivery, and surveillance immensely. We believe traveling by taxi will become the norm and owning a personal vehicle will become the exception. In addition, frictionless delivery should enable new business models and further catalyse ecommerce while the data assets generated by autonomous transportation systems provide real-time insights into the state of the world. With the rise of autonomous vehicles, aka robots, we believe incumbent providers throughout the automotive, logistics, retail, and insurance sectors will be upended.

Throughout history, we have had to rely on trusted intermediaries to store and transfer value. With the launch of Bitcoin, Satoshi Nakamoto proposed an alternative financial system, one decentralised and free from top-down control. ARK believes that cryptocurrencies have the potential to shift the course of monetary history and eliminate inefficiencies.

We believe that the financial ecosystem will be forced to reconfigure in order to accommodate and take advantage of the capabilities that blockchain technologies afford: increased transparency, reduced capital and regulatory controls, and virtually no contract execution costs. With blockchain technology, we project that more of everything in the world will become money-like - fungible, liquid, and quantified - and that every corporation and every consumer will need to adapt. Corporate structures themselves may be called into question and every sector likely will be affected.