All other countries
Download as PDF
by Koh Liang Choon, Head of Asian Fixed Income
24 January, 2019

USTs registered a strong rally in December
USTs fell in December. The ceasefire in the trade war between China and the United States after talks at the G20 summit in Argentina between U.S. President Donald Trump and Chinese President Xi Jinping did little to support sentiment. Risk assets came under continued pressure from a multitude of factors including growth concerns in major economies, an increased likelihood of a no deal Brexit, US government shutdown and a sharp decline in energy prices. Despite the market developments, the Federal Open Market Committee (FOMC) raised rates during their meeting in mid-December. It also indicated that “some further gradual increases in the target range for the federal funds rate will be consistent with sustained expansion of economic activity, strong labor market conditions, and inflation near the Committee’s symmetric 2 percent objective over the medium term”. Market reaction to the FOMC decision was severe with risk assets coming under further pressure. However, the widening in Asian credit spreads was just moderate. Subsequently, markets began to price out any rate hikes in 2019 causing another down move in UST yields. Overall, 2 and 10-year yields ended at 2.49% and 2.69% respectively, about 30bps lower compared to end-November. 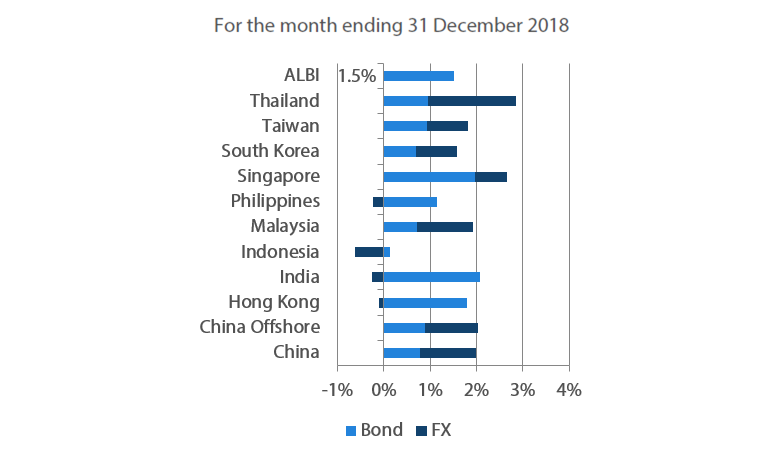 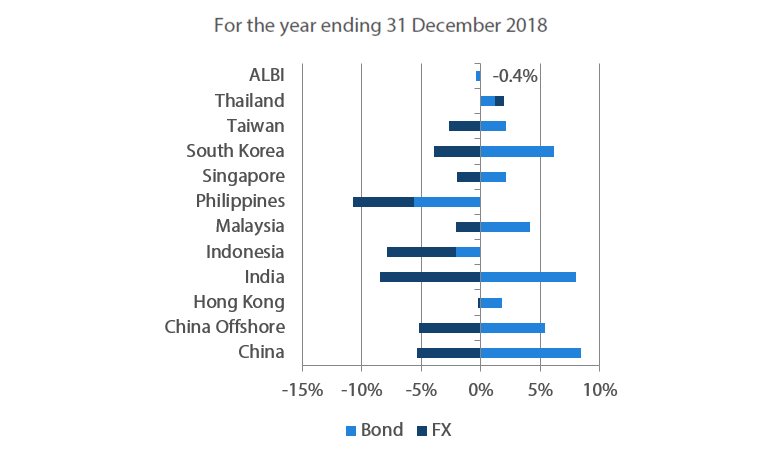 Note: Bond returns refer to ALBI indices quoted in local currencies while FX refers to local currency movement against USD. Returns are based on historical prices. Past performance is not necessarily indicative of future performance.

Headline CPI inflation prints registered mostly lower across the region. Particularly, headline CPI in the Philippines recorded a sharp drop. The moderation to 6.0% Year-on-Year (YoY) from 6.7% in the previous month, was prompted mainly by lower food inflation, likely reflecting a drop in rice prices. Similarly, inflation prints in Thailand, Korea, China and Singapore have all shown moderation from the previous month. On the other hand, inflationary pressures in Indonesia rose for a second straight month, due partly to a further rise in transport inflation.

US and China reached a truce on trade disputes

President Trump and President Xi declared a 90-day truce on the implementation of additional tariffs during a meeting on the side lines of the G20 summit. Both sides have also announced that trade negotiations would resume, with the White House announcing that China will be buying an unspecified "but very substantial" amount of farm, energy, industrial and other produces to reduce the bilateral trade deficit. Separately, on 1 December, the CFO of Chinese telecom giant Huawei's chairman was arrested in Canada on US request, over potential violations of US sanctions on Iran, triggering concerns on the ongoing trade negotiation.

For the first time since August 2011, the BoT voted 5 to 2 to raise the policy rate by 25bps to 1.75%. The central bank also lowered its growth forecasts for 2018 and 2019 by 20bps each, to 4.2% and 4.0% respectively. Still, the central bank described economic growth as "consistent with its potential" and noted that tourism had "started to show signs of improvement." Meanwhile, Thailand's Monetary Policy Committee expected its projection for headline inflation to be broadly unchanged, while core inflation was expected to rise on gradual increases in demand-side pressures.

Markets are increasingly pricing in a less aggressive Fed for 2019. Against such a backdrop, we believe that higher yielding bonds are likely to outperform, supporting our constructive views on Indonesian and Indian bonds. Relatively stable inflationary pressures, coupled with a central bank that is likely to stay on hold, will boost demand for Indonesian bonds as market focus turns to attractive real yields offered in the space. Meanwhile, a more dovish new central bank governor, moderating inflation and OMO from the RBI should lend support to Indian bonds. Separately, we believe that Chinese bonds will continue to trade firmly on the back of accommodative monetary policy from the PBoC.

We favour the SGD vis-à-vis the MYR. As Singapore core inflation prints remain elevated, the MAS is likely to keep an appreciating FX stance, supporting demand for the SGD. In contrast, lower oil prices pose a risk to Malaysia's ability to meet its fiscal targets, which may heighten concerns of a possible credit rating downgrade for Malaysia.

Strong December returns capped a volatile 2018
The strong returns in December capped a volatile year for Asian credit. For 2018, high-grade returned -0.04% recovering from a -2.74% return in May with spreads widening by about 55bps over the year. High-yield corporates fared worse returning -3.24% recovering from a -5.74% return in June, as spreads widened 165bps in 2018. Over the year, intensifying trade tensions between the US and China, concerns that China’s deleveraging efforts have started to tighten financial conditions onshore and further weigh on domestic growth, and broader Emerging Market developments have weighed on spreads. For high-yield, a shift in supply and demand dynamics provided yet another headwind. Tighter liquidity conditions in the onshore Chinese market caused Chinese offshore bond supply to remain heavy, but simultaneously moderated demand from onshore investors.


Primary market activity continued to be fairly active in December. Total issuances amounted to about USD 14.2bn in the month, compared to about USD 23.8bn in November. The high-grade space saw about 20 new issues worth around USD 8.7bn including USD 3bn from a 3 tranche Indonesian sovereign issuance. Within high-yield, there were a total of 31 issues amounting to about USD 5.5bn. For the year, total issuance was around USD 231bn with high-grade accounting for around 70% of the total. This was lower than the more than USD 300bn in 2017 but still higher compared to preceding years.

Volatility likely to persist into 2019


Heading into 2019, the macroeconomic backdrop for Asian countries should remain broadly neutral for credit performance. GDP growth is expected to moderate across the key economies, notably China, although hard landing scenarios are not expected to materialise. Fiscal policy should remain supportive of growth in most Asian economies, notably China, and act as a stabiliser to weakness in external and private domestic demand. Given the national elections in India and Indonesia, some fiscal slippage is to be expected, although the broad fiscal consolidation trend in these countries remain intact and is likely to resume in the coming years. Last but not least, with inflation remaining subdued, monetary policy is expected to stay neutral to accommodative across most Asian economies. The US and China are currently in negotiations to resolve the trade conflict, with a tentative deadline of 1 March 2019 to reach a deal. Failure to come to a compromise, on trade and other strategic issues, will likely be negative for credit spreads and broader risk environment.

Liang Choon leads a team of experienced analysts and portfolio managers, responsible for managing active Asian fixed income portfolios covering Asian local currency fixed income, Asian credits and Asian currencies. He has 25 years of experience in the financial industry, of which 11 years were in managing Asian and Singapore fixed income portfolios. He joined the firm in October 2010 and prior to this was with APS Komaba Asset Management, where he was responsible for managing their institutional Asian fixed income mandates. Liang Choon holds a Bachelor Of Business Administration with majors in Finance and International Business from Simon Fraser University, Canada and a Master Of Science (Applied Finance) from the National University of Singapore. He is also a Chartered Financial Analyst charterholder