US Recession Risk and the Path for Interest Rates

All other countries
Download as PDF
by Andre Severino, Global Head of Fixed Income
22 November, 2018

The US economy is enjoying its second-longest growth cycle in history and is on the way to becoming the longest on record. The duration of this cycle has given rise to the debate about when it will end. The Fed has raised interest rates eight times since December 2015 in an effort to normalise monetary policy from the emergency levels set after the financial crisis, and this has added to the debate about when the current growth cycle may end. Although there are some imbalances appearing in the US, we see more positive signs that support a continued growth cycle than we do risks of recession over the next 12 to 18 months. The NY Fed’s own recession probability model has risen in recent years but stands at 14.5, which is relatively low given historical levels ahead of actual recessions.

The flattening of the yield curve in the US has added to concerns about the cycle. The 2’s 10’s spread has declined from 260bps in 2014 to around 25 basis points. Recessions tend to be preceded by a Fed hiking cycle and an inverted yield curve. The Fed has downplayed this concern recently, owing to the low level of longer-term rates due to a lack of term premium caused by quantitative easing and demand for duration. We agree with this view, however we think the potential for the curve to steepen or at least stabilise and not invert has increased recently. Supply dynamics in the US, as well as reduced demand caused by the ECB’s intention to stop balance sheet expansion at the end of this year and the BOJ’s recent reduction in QE purchases, should put pressure on the long end of the curve. The combination of these events may influence investors to demand a higher-term premium and therefore we may see longer duration underperformance and a steeper curve.

There are many reasons to believe recession risk is low and for continued growth momentum in the US economy. Some of the key factors are the strength of the labour market, robust capex investment, moderate inflation and, in spite of the Fed tightening cycle, broader financial conditions remaining very easy in the US. Additionally on the fiscal side of the equation, government spending has increased and the regulatory environment continues to improve. While these conditions are supportive of growth they are also the reason US corporate leverage is now at record levels - over $9 trillion. The majority of this debt, as former Fed Chair Janet Yellen recently pointed out, is held by retail investors. When financial conditions become too restrictive, this will be an important area to watch, and manage exposure to the sector accordingly. We have seen spreads widen in the corporate sector, and given the outlook for continued growth and supportive financial conditions, this presents opportunities to find continued value in quality names. 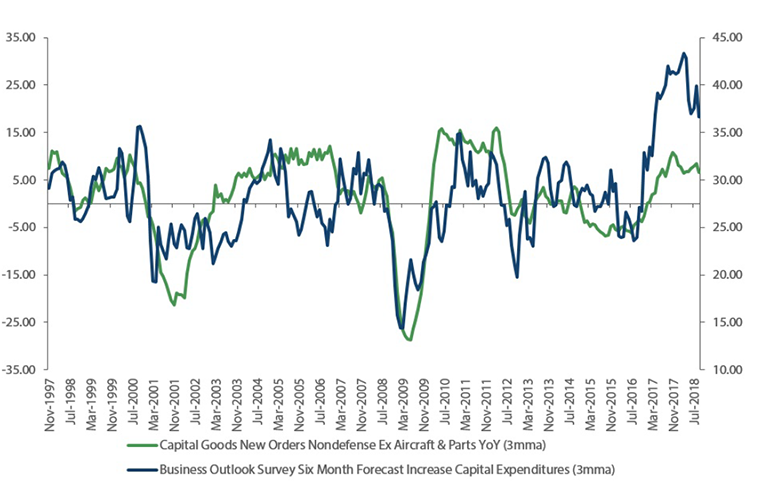 Over the next twelve months, the risk seems to be skewed towards stronger growth in the US. Continued labour market strength and broadly easy financial conditions will support the economy. The Fed will continue its measured tightening cycle and inflation should remain near target. As the Fed funds rate continues to move towards the median target around 3.10%, we think the curve will avoid inversion, at least until late 2019, and we should see 10 year rates capped around 3.50%. Should the curve approach inversion, the Fed will need to decide if it wants to continue on the measured rate hiking path or pause to ensure that it does not dampen inflation, which should act to keep rates from rising.

When considering the path of interest rates in the US over the next twelve months, the base case appears for gradual rising, with the risk skewed to very moderate rises or lower rates. There will be increased supply, however with moderate inflation and the yield advantage the US presents for global investors as well as domestic pensions and insurance companies, we should continue to see increased demand on any near-term rate rises. If the outlook for continued growth stalls for some unforeseen reason, we will see the Fed pause in their rate-hiking cycle and this would further support a case for lower rates.

Andre Severino, is the Global Head of Fixed Income and a Senior Managing Director in Nikko AM’s London office. Andre’s has overall responsibility for London’s Global Fixed Income team that consists of 11 investment professionals and manages in excess of $11 billion in assets across a broad range of strategies. Andre originally joined Nikko AM’s New York office in 2007 before transitioning to the London office in 2010, where he took over the management of the team in 2014. In that time, Andre has built a robust investment team and a consistent investment process used across the team helping to generate ideas and construct high conviction portfolios. Additionally, Andre has been responsible for managing Nikko AM’s High Conviction Bond Strategy since April of 2008 which has grown to over $4.5 billion.

Andre has over 20 year’s investment experience with a particular focus in managing assets in Global Macro and in Developed Sovereign markets. Prior to Nikko AM, was with Fairstream Capital Management, a Global Macro hedge fund acquired by Nikko Asset Management Americas in 2007. Prior to Fairstream, Andre worked at Ritchie Capital Management where he focused on macro strategies in the G-10 countries. Andre began his career at Chicago Research and Trading (CRT) in 1990, an options market making boutique. He received his Bachelor of Business Administration, with a major in Finance, from Loyola University in Chicago in 1990.