All other countries
Download as PDF
by Lawrence Prager, CIO, Nikko AM Americas
05 November, 2018

Carbon budget, 2C, 1.5C, the Paris Agreement, Transition Risk and Task Force on Climate-related Financial Disclosures – these are terms increasingly bandied about mainstream investor conversations. In this paper, we briefly explain where global climate action stands in relation to the key terms, with climate science speak in parentheses.

Carbon budget in a 2 degree scenario

Climate-related impacts refer to events caused or aggravated by a rise in global average temperature. This rise in temperature is due mainly to human (or “anthropogenic”) activities emitting greenhouse gases.

A 2C increase relative to preindustrial levels is set as a goal, in fear of likely non-linear, irreversible and catastrophic changes. Contrary to popular belief, this widely cited figure came from a Yale climate economist, William Nordhaus, and not the climate science community. The basic concept of the carbon budget is simple. Total emissions since the industrial revolution must be kept below a certain amount – hence, the “budget” - to achieve the 2C target. At the current pace, the ‘budget’ will be used up in less than 20 years.1

The challenge is first to have annual emissions reach a maximum (or “peak”) and then fall, in order to stay within the budget. If the peak is delayed, there will be too little time to decarbonize. 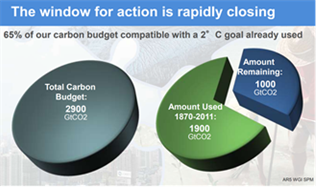 One Citi estimate expects a loss of global GDP of US$44 trillion by 2060 in a do-nothing scenario.2 There are sharply higher climate losses as the scale and number of very large climate disaster events climbs. Over the last four decades, in the U.S., the number has increased between three and five times as economic losses increased around five times to over $80 billion on average, recently exceeding $300 billion in 2017, a historical record.3

There will be more frequent extreme heat days, ‘five-sigma’ heat waves that will be ‘devastating and irreversible.’ 4 In addition, water is considered one of the primary medium in which climate-related impacts are felt. This could be through a clean water crisis in cities, rising pollution health risks, drought and degraded arable land, damage to marine ecosystems and an unstoppable rise in sea levels. All of which could lead to large-scale involuntary migration, multiplying geopolitical and, most likely, global risks.5

What about the Paris Agreement?

If we meet the targets set out in the Paris Agreement, are we not safe? Unfortunately not. Annual emissions have not, and do not peak under the Paris Agreement. It was lauded as a success for near global consensus for action, but the aggregate of nationally determined contributions (NDCs) are not adequate to achieve the 2C target. 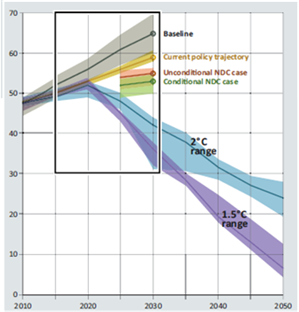 The Intergovernmental Panel on Climate Change reported that based on current trajectories, the world is to reach a 2C by 2050 and 4C by 2100. In 2016, we have reached a 1C increase; the chart below shows average temperature projections for the US. 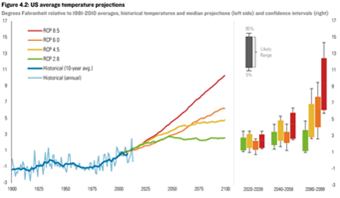 Much more aggressive action is needed, and the next five to 10 years is critical. Economic transition is still in the early stages, with annual emissions rising.

The IPCC’s special report just released last month laid out the benefits of limiting warming to 1.5C but also the ‘far-reaching’ and ‘unprecedented in terms of scale’ industrial transitions required to do so. Confirming that the Paris Agreement NDCs will not limit warming to 1.5C, and the benefits to keeping warming to 1.5C or below, we anticipate a re-doubled effort to strengthen policy response.

The report is, further, very suggestive of the importance and likely central role of limiting climate change to achievement of the UN Sustainable Development goals.6

If it’s 1.5C, 2C, or 4C, how much does it matter? A group of Stanford University researchers in a study earlier this year estimated that by 2100 per capita output would be 15-25% lower under the current Paris based commitments (2.5-3%C warming), as much as 30% lower under a 4C warming scenario, and that the world would be some $20 trillion cumulatively better off achieving the 1.5C target relative to 2C target, compared to the growth otherwise achievable if temperatures were at the 2000-2010 level.7

There continues to be evidence that the public and private sectors’ will to address climate risk continues to build. We especially note the following--The Task Force on Climate-related Financial Disclosures (TCFD) launched in 2016, set to be a game-changer, requires companies to disclose their governance, strategy, risk and performance in relation to climate change.

The recent Global Climate Action Summit in San Francisco saw a series of announcements made. Almost a fifth of Fortune Global 500 companies are committed to Science Based Targets initiative (SBTi), which is based on a carbon budget aligned to the 2C goal.

Economic growth and greenhouse gas emissions are decoupling. About 27 cities, including London, New York and Sydney, have reached peak emissions while their populations and economies grew by an average of 1.4% and 3% per year, respectively. The Global Green Bond Partnership was also launched to scale green bond issuances mainly by sub-national entities and corporations, as the green bond market rapidly grew from annual issuance of US$3.4 billion in 2012, to US$161 billion in 2017.

About 400 investors with US$32 trillion in assets under management are involved in one or more areas under The Investor Agenda, an umbrella of investor initiatives relating to Climate Change. Evaluating climate change risks and opportunities in business and investment decisions will be the new norm. Some climate change impacts are likely to be unavoidable, but as we see it, climate action certainly is unstoppable.

Nikko Asset Management is proud to be one of about 50 global investors - and the first one of only two asset managers headquartered in Asia – to be supporting all four areas under The Investor Agenda.

Larry has decades of experience within the asset management industry, primarily within investment research and strategy. Since 2010, he has been responsible for leading a team of investment professionals within Nikko AM’s US office.

Starting in 2005, Larry was head of equity research at Nikko AM in Tokyo, where he oversaw a team providing investment research to the firm’s Japanese equity portfolio managers.