All other countries
Download as PDF
by Peter Sartori, Head of Asian Equity
25 September, 2018

Asian equities fell in August
The MSCI AC Asia ex Japan (AxJ) Index fell by 1.02% in USD terms in August, largely on the back of currency weakness. Global trade fears continued to drive sentiment, as talks between the US and China ended with no sign of progress. The trade war escalated, with each country imposing a further USD 16bn of tariffs on the other’s goods. Elsewhere, Argentina’s currency crisis and US sanctions on Turkey dampened risk appetite and weighed on emerging market stocks. The US Federal Reserve (Fed) left interest rates unchanged in August. In commodities, oil prices rose by 10% on lower US crude inventories and expected supply disruptions in Iran and Venezuela. 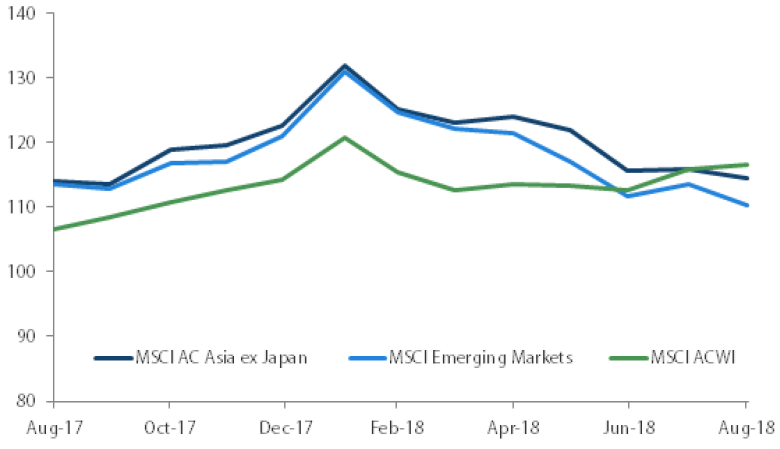 Source: Bloomberg, 31 August 2018. Returns are in USD. Past performance is not necessarily indicative of future performance. 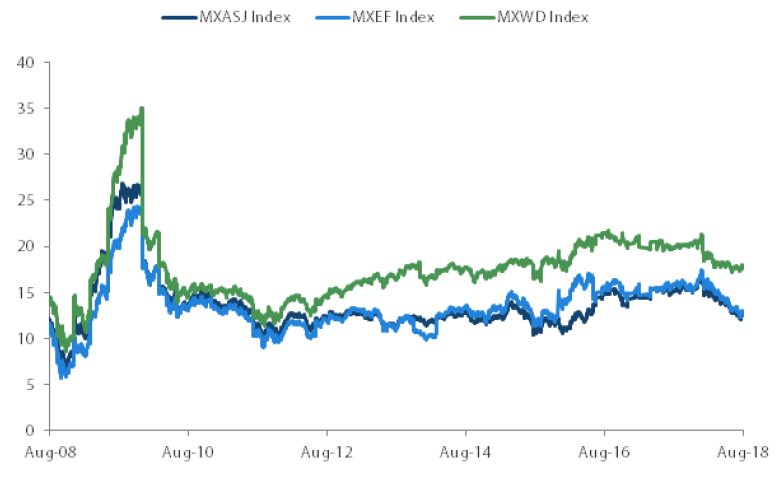 Source: Bloomberg, 31 August 2018. Returns are in USD. Past performance is not necessarily indicative of future performance.

China and Hong Kong underperformed, declining by 3.8% and 2.3% respectively in USD terms. In China, while the manufacturing purchasing manager’s index (PMI) picked up to 51.3, fixed asset investment growth and retail sales growth slowed in July. Amid concerns that the trade war and financial deleveraging were hampering growth, Chinese authorities loosened monetary and fiscal policy to support the economy and stabilise market expectations. The central bank also stepped in to reintroduce measures to support the Renminbi after it fell to multi-year lows against the USD. In corporate news, Tencent posted a 2% drop in 2Q18 profits, its worst quarterly print in several years. The company was also hit by a revamp at the Chinese state regulator, which effectively froze the launch of new video games. In Hong Kong, 2Q GDP growth slowed to 3.5% year-on-year (YoY), weighed down by the escalating US-China trade conflict and rising US interest rates.

In North Asia, Korea and Taiwan outperformed, rising respectively by 1.9% and 1.0% in USD terms. The Korean Won was the only currency apart from the Thai Baht that appreciated against the USD in August. The finance ministry proposed its largest budget increase in a decade, calling for a 22% jump in funds allocated to create jobs. In Taiwan, positive perception around new iPhone launches buoyed the country’s Apple suppliers. TSMC also bounced back from a virus attack which shut down several of its factories, and after its US rival Globalfoundries decided to abandon its chip-development programme.

India ended the month higher despite significant Rupee weakness. Its GDP growth accelerated to 8.2% YoY in the quarter ending June 2018. That said, the Rupee hit a new low against the USD in August, owing to concerns about its macro position: the country’s fiscal deficit for April – July 2018 stood at 87% of the government’s full-year budget. At the beginning of August, the Reserve Bank of India raised its repo rate by 25 basis points (bps) to 6.5%.

ASEAN saw mixed returns. The Philippines outperformed, while Singapore lagged. The Philippine economy grew the fastest among its peers in 2Q18. To rein in inflation expectations, the central bank raised its policy rate by an aggressive 50bps in August, following consecutive 25bp hikes in May and June. Bank Indonesia also hiked rates by 25bps to curb its current account deficit. Elsewhere, Singapore was weighed down by trade concerns and Q2 GDP growth that missed expectations: the 3.9% print was a moderation from 4.5% growth in 1Q18. 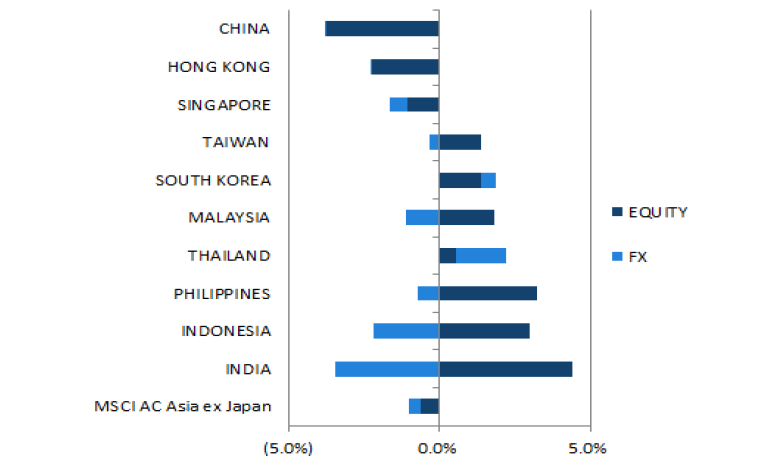 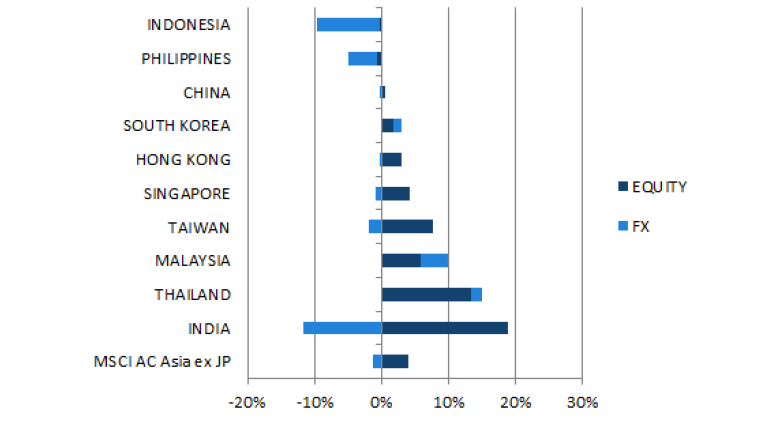 1Note: Equity returns refer to MSCI indices quoted in local currencies while FX refers to local currency movement against USD. Returns are based on historical prices. Past performance is not necessarily indicative of future performance.

Valuations in Asia continue to be attractive

That Asian markets offer better growth at more attractive valuations than practically any other region globally is well flagged. That these economies are better positioned to handle a strong USD than in previous instances, is also well known. But that has been ignored due to ongoing trade war tensions. Admittedly, with a number of the world’s largest economies currently helmed by highly opinionated leaders that leaves them with limited policy wriggle room, the prospects of any resolution looks dim in the short term. But that is akin to missing the woods for the trees. With most AxJ markets having corrected 5-10% year-to-date (YTD) with the exceptions of Taiwan and India, in our view, the negatives are increasingly being priced in. And in a number of AxJ markets, there is fundamental improvement on the ground.

Focus on China sectors orientated towards domestic consumption and healthcare

China remains committed to financial deleveraging, despite some negative short-term implications for growth. Till recently, foreign investors vociferously argued in favour of a clean-up of China’s financial system. Now, even though broad reforms are underway, the market is being penalised. The shift in policy focus from quantity of growth to quality augurs well for sustainable returns in the long term. This retracement therefore has provided an opportunity for long-term investors to accumulate shares in well-run businesses with multi-year structural tailwinds. In particular, sustainable growth franchises in domestic consumption and healthcare sectors are attractively priced.

India has been the relative outperformer YTD by virtue of its relative immunity to the negative consequences of a trade war. Combined with continued inflows into domestic mutual funds (albeit slowing) bidding up index heavyweights, by and large, valuations are no longer compelling. There are signs of a pickup in rural demand, higher public sector investments in the infrastructure space, stabilisation in exports and nascent signs of a recovery in private sector capital expenditure. However, this optimism is reflected in valuations. There are signs that the opposition parties are contemplating various alliances to put up a more united stand in the general elections in 2019. Thus, we will look to pare our overweight position in the coming quarters.

Remain selective in Korea and Taiwan

The euphoria surrounding the Trump-Kim meeting has ebbed, and although President Moon continues with his conciliatory moves towards the northern neighbour, the softer economic print has taken centre stage. Thus, we remain selective in Korea. In Taiwan, pockets of the tech sector are attractive. The annual Apple iPhone cycle will likely result in renewed interest across a number of Taiwanese suppliers in the coming months and we remain invested in structural growth areas of semiconductor, advanced packaging and high speed transmission interface sub-sectors.

Within ASEAN, early signs of a consumption recovery in Indonesia is positive; however infrastructure prospects are likely to remain tepid until after elections. Thailand offers interesting bottom-up opportunities. While the Philippines appears to have put the worst behind it, it is still not out of the woods given the state of government finances. Malaysia is interesting in that there could be significant medium- and long-term positives should the new government deliver on its electoral promises; we are content to wait on the side lines pending proof.

Source: Bloomberg, 31 August 2018. Ratios are computed in USD. The horizontal lines represent the average (the middle line) and one standard deviation on either side of this average for the period shown. Past performance is not necessarily indicative of future performance.

Peter heads the Asia ex-Japan equity team at Nikko AM Asia. Based in Singapore, he manages a team of more than 20 Asian equity specialists and co-manages the regional product. An investment professional with 28 years of funds management experience, Peter joined the firm from boutique Asian equity specialist Treasury Asia Asset Management (TAAM) which was acquired by Nikko AM in 2013. Peter successfully launched TAAM in 2005 and it quickly established itself as a quality institutional asset manager. Prior to TAAM, Peter worked at Credit Suisse Asset Management, Scudder Investments and First State Investments. Peter holds a Bachelor of Business and is a Fellow of the Financial Institute of Australia (FINSIA).