Where Are We With Corporate Governance In Japan?

Japan’s corporate governance reforms have progressed slowly but surely and the recent revision of the code will add momentum for the unwinding of cross-shareholdings.
Share this

Corporate governance has been a key pillar of Prime Minister Shinzo Abe's economic revival program. Its ambitions to improve transparency extend to nothing less than a revamp in the nature of the ties between business, investors and society, with the onus put on each party to become more proactive and invested in the actions of others.

Given the country’s demographics, corporate governance reforms are key to the attractiveness of Japanese stocks. The message behind the reforms is that domestic companies need to rediscover their hunger, be ambitious in expanding at home and abroad, seek higher productivity and equity returns and pass on the benefits to all stakeholders, and most importantly, to shareholders.

Japan’s Stewardship Code was introduced in 2014, followed by Corporate Governance Code in 2015, together calling for public companies and institutional investors to engage in constructive dialogues to enhance shareholder value. In May 2017, the Stewardship Code was revised, urging the disclosure of detailed proxy results. Institutional investors and asset owners are required to assume a higher level of fiduciary responsibility, with the aim of enhancing their investee companies’ return on equity (ROE). Japanese companies’ ROE is currently at around 9%, lagging that of the US, which is consistently in the mid-teens.

As of 5 April this year, 227 companies including asset managers, pension funds and proxy advisors had accepted and signed the revised Stewardship Code.

Under pressure from shareholders, Japanese companies are increasingly putting stockholder needs first, with clearer financial targets and higher dividends and buybacks. Companies with anti-takeover measures have declined from their peak in 2008 at 569, to 386 as of May 2018, as they continue to discontinue these measures, according to Nomura. The percentage of TOPIX companies with two or more independent outside directors has risen from a mere 18% in 2013 to 88% as of July 2017.

According to a survey conducted by METI (Ministry of Economy, Trade and Industry), approximately 78% of Japanese companies had soudanyaku or komon (senior advisor) positions as of June 2016. We believe CEOs should have ultimate responsibility in making decisions, not advisors (i.e. former CEOs) working behind the scenes. Of these companies, 20% were said to be reviewing the system. Today, we believe more companies are taking a fresh look at such roles as the Tokyo Stock Exchange urged companies to disclose more details about them in corporate governance reports, starting in January this year. This is meant to hold companies to a higher standard of accountability.

As we have seen, reform is clearly taking place. However, we believe more can be done, with the arrival of the revised Corporate Governance code. 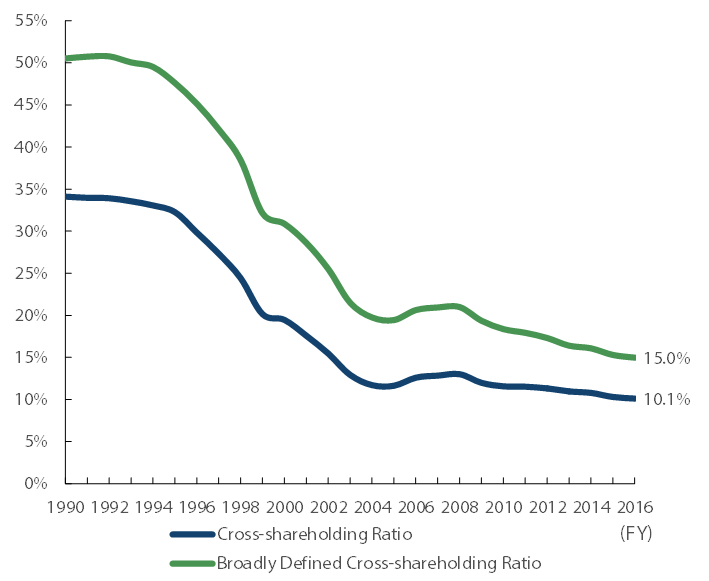 Three years after the code was introduced, the revised version was announced by the Tokyo Stock Exchange and immediately took effect on June 1, 2018. The core of the revision is unwinding of cross-shareholdings (see Exhibit 1), enhanced board committees and mobilising Japan’s corporate pension funds toward greater engagement.

Companies will now be under strict scrutiny by investors and will be forced to justify their stock holdings and therefore, boards will annually assess whether or not to hold each individual cross-shareholding. They will examine whether the purpose is appropriate and whether the benefits and risks from each holding cover the company’s cost of capital.

In the case of Kyocera (see Exhibit 2), cross-shareholdings represent as much as 34.1% of assets, dragging down return on assets (ROA) to 4.4%. But we are already seeing signs of unwinding of such ties. Over the past two fiscal years, the percentage of companies that have reduced cross-shareholdings (share basis, from FY3/14 through FY3/16, TOPIX 500 universe) was 71.5%, compared to 28.5% who increased such holdings, according to Mitsubishi UFJ Morgan Stanley. The newly revised code is expected to accelerate this trend. 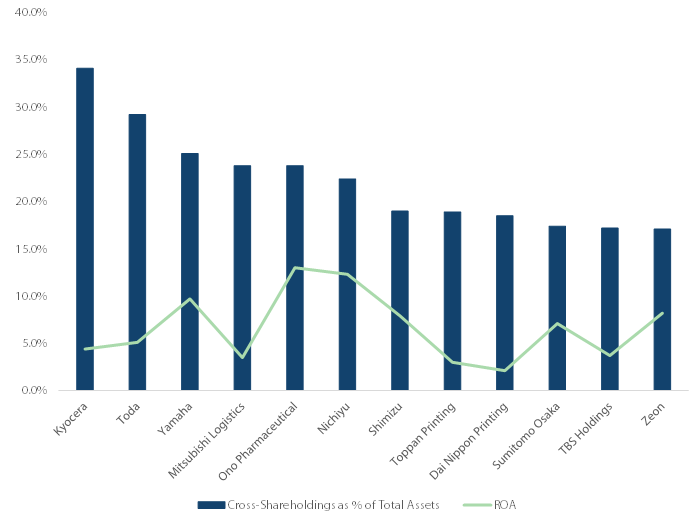 Source: Nikkei. As of April 11, 2018. Universe is TOPIX companies (excl. financials) with market cap above JPY200bn, based on most recent full year earnings.

Companies that decide to dispose of their cross-shareholdings are likely to distribute a certain amount, if not all, of the proceeds from stock sales in the form or higher buybacks and/or dividend hikes.

There will also be cases where companies decide to buy back the held shares directly from their “partners.” In either of these cases, companies that repurchase the shares can expect to see higher shareholder value from an EPS boost, and higher ROE as a result of a lower equity base.

Companies that dispose of the shareholdings can also expect to see a positive impact on their earnings as they realise capital gains from the share sales.

In addition, we can expect to see more pressure on top executives to unlock and create value. Management will have less “stable” shareholders at annual general meetings to support sub-optimal corporate strategies. 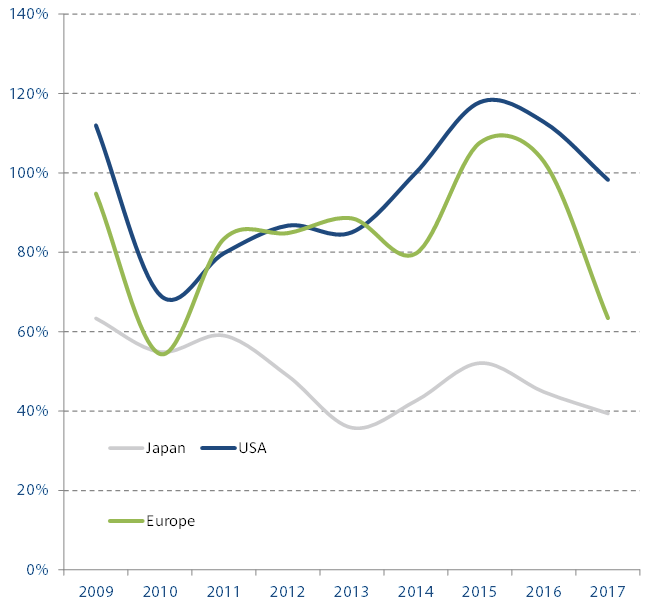 As a leader in Japan equity stewardship, we have been actively engaged in proxy voting to effectively influence management to enhance shareholder value. In particular, we have been pressuring management to raise capital efficiency and distribution to shareholders. This has meant that our “against” votes are up to 16.9% in 2017 from 9.1% in 2016.

We take a disciplined approach by using guidelines with quantitative metrics (e.g. payout ratio, net cash/equity ratio, etc.), combined with a qualitative assessment to make well informed decisions in voting for or against the re-election of board directors, including CEOs.

Given the revised code, we continue to find ways to engage with companies’ management to create value for our clients.

One of the ways in which we enhanced our engagement process involves revising our internal guidelines to screen companies that have high cross-shareholdings and low ROE. We then create a focus list of companies to strengthen our engagement. In cases where we see no improvement in management’s attitude towards addressing the situation, we do not hesitate to vote against the re-election of board directors.

Looking ahead, we believe Japan offers a myriad of opportunities for every type of investor.

Conservative guidance by Japanese companies represents an opportunity for investors focused on earnings expectations. Many companies whose fiscal year ends in March were forced to give their guidance in their earnings season in May. This was after seeing the yen’s surge and market disruptions following the VIX shock in the U.S., and protectionist moves by President Donald Trump in the first quarter of this year.

We can expect to see upward revisions as the new fiscal year progresses if current JPY/USD stays around 110. A majority of companies have forecast around 105.

We also see higher profitability to continue in the medium term as a result of ongoing efforts by Japanese companies to engage in structural reform and price hikes. Japan’s overall corporate net margin is evidence of improvement in business operations. It was at 5.3% in the year ending March 2017, the first time it reached 5% since 2000 when consolidated accounting started in Japan.

The newly revised Corporate Governance code is another big step forward for the Japanese equity market. Corporate managers are being forced to revisit their cross-shareholdings and become more financially savvy. We believe clearer financial strategies, with a sense of cost of capital in mind, will provide attractive opportunities as they bear fruit for long-term investors in Japan.

Prior to Nikko AM, he served as Japan Equity Portfolio Manager at Principal Global Investors. He also worked at US hedge fund, Taiyo Pacific Partners in California, and as investment banking analyst at Daiwa Securities SMBC. Junichi earned his BA in Economics from the University of Michigan, Ann Arbor and MBA with Honors from the University of Chicago Booth School of Business. He is a CFA® charterholder.

Jiro joined Nikko Asset Management in 2012 and is Director of the Equity Research Group in Tokyo.

Jiro has been working in the asset management industry since 2000 when he started as an Equity Analyst. He assumed a management role in equity research in 2005. Jiro has served as the chairperson of the UN PRI Japan Network in 2012 and 2013, and holds a B.A. in Economics/Politics from Waseda University.