Has China Outgrown the EM Umbrella

Considering the unique profile of the market and how much China influences the global economy, a decision about China could be the most important call an investor can make at this time.
Share this

Since the term emerging markets (EM) was coined over three decades ago, almost all the underlying facts about EM as an asset class have changed. Historically, macro views tended to dominate EM investing more than for developed markets (DM) for a variety of reasons: 1) Emerging countries experienced a greater degree of political and economic instability, 2) they were more dependent on global trade and US monetary policies in the USD reserve system, 3) trade blocs were more isolated with higher barriers to entry1, and 4) EM companies were generally younger with shorter operating histories.

However, globalisation and the transfer of technology have elevated many EM companies to world class leadership, with accounting and operational standards aligned to their DM peers. Access to capital has also become globalised, as these companies are traded on both domestic and overseas bourses, and the technology, infrastructure, and governance supporting their capital markets has had to keep up with the companies they service.

Along with globalisation, consumer growth has shifted the balance of economic power. For example, in 1997, DM accounted for 55% of global GDP to EM’s 45%2. In 2017, that ratio was about 41:593. In five years’ time, the IMF projects that EM will account for 2/3rds of global GDP. How do you justify calling the lion’s share of the global economy an emerging asset class?

The growing impact of China

The current reality is that China is the largest trading partner to almost all Asian nations4. China influences the East Asian EM bloc via direct trade, the IndoChina and Western Asian bloc via the Belt and Road Initiative, and the resource-producing EM blocs via its insatiable demand for basic commodities. China positions its export policy to focus on EMs because of the similarities between China and EM countries’ consumption needs and their common inclination for desirable price points.

This EM focus for China’s exports is well-illustrated by Xiaomi founder Lei Jun, who has named his corporate strategy the “encircling strategy”5: first take over the countryside, to prepare for the final assault on the cities. Xiaomi, Huawei, and a number of state owned champions’ biggest export markets are currently India and Russia, then Latam, as they have set their sights on further global expansion.

Ultimately, we expect EM economies to show a higher correlation with China than the US. This coupling effect may eventually show up in equity returns, too6.

The question of a separate allocation

In the late eighties, debate centred on whether EM should be treated as an integral part of a global mandate or a separate dedicated allocation. The debate touches on the question of index weight being a backward looking or forward looking representation of the EM asset class’ economic value creation. We believe the following set of questions were useful guides to such debate:

(2) Will the asset class become large enough to justify a dedicated allocation?

(5) Is the correlation to DM low enough to justify a separate allocation to EM for diversification reasons?

Over the last three decades, the answers to all those questions have turned out to be a resounding “Yes”, and an overweight allocation to EM has proven to be the winner in risk/return7. That said, success has brought new challenges. Today, the EM economic growth premium is widely acknowledged, and EM market capitalisation continues to rise. But what happens when the bloc of economies that we call EM no longer appear homogeneous?

We think multipolarity (to borrow the latest buzzword in geopolitics these days) may be a better way of looking at global investing than DM versus EM. There are EM markets such as Korea and Taiwan which are closely linked to global trade, and then there are those that are linked to commodities and natural resources. And then there is China, the elephant in the room.

In a hypothetical full inclusion scenario in which China would account for over 30% of the EM index, we would further argue that China deserves its own dedicated allocation. We consider the set of questions above to be as relevant today for the treatment of China as they were for the debate of EM long ago. We think that a forward looking allocation to China will serve investors well into the future, as we believe the answers to the first three questions on China are all positive, and offer our perspectives on questions #4 and #5 as follows:

The China A-share market behaves very differently from the more mature markets of Hong Kong and other developed economies. The A-share market is dominated by retail investors, and the stock listings are predominantly small and mid-cap companies, as the charts below show. One conclusion to be drawn from the behaviour of an average investor in the A-share market is their high turnover rate and short investment horizon. This phenomenon, which had been observed in other Asian countries during their earlier developmental years, presents an opportunity of “time arbitrage” for investors with discipline and a longer time horizon. We believe a fundamental research-driven approach with a long-term horizon is best suited for China’s high information intensity market.

The value proposition of investing in emerging enterprises, which are well entrenched in serving China’s billion consumers and quickly gaining technological edge, is further explored in our recent paper “China’s Move from Factory of the World to Silicon Valley of the East”. 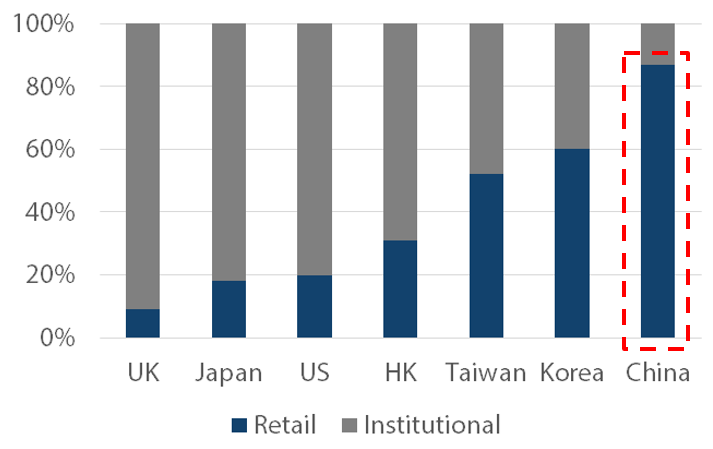 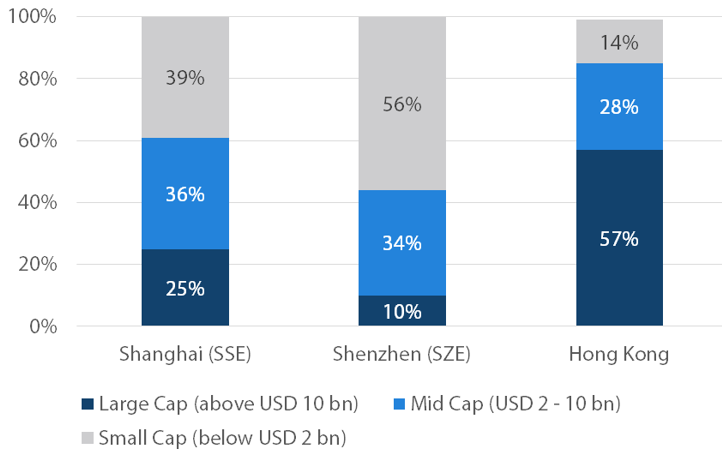 The onshore market in China is large and can be quite volatile, but it also moves to its own rhythm, thus exhibiting lower correlation to other markets. For an asset allocator, the proposition of higher return and lower correlation is a necessary ingredient for maximizing the diversification benefit from an emerging asset class to expand on its portfolio’s efficient frontier. China’s volatility and correlation to other markets are detailed in the tables below. 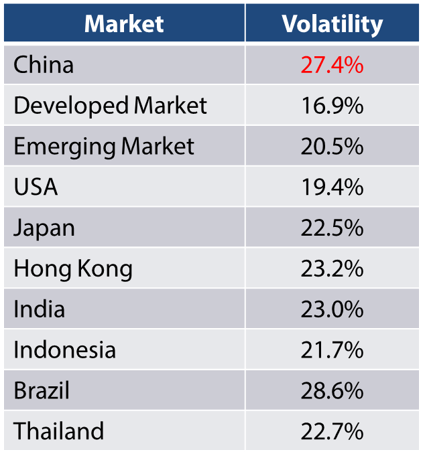 Looking to the future

Investors everywhere are learning to deal with China. It is big, it is affecting all aspects of global markets, but it does not operate according to conventional rules and wisdom developed in a unipolar world under US leadership. China’s rapid rise from an emerging market to a developed world power has been difficult to navigate for all investors. From where we sit, our investment teams have always considered the rise of Asia and China our base case.

The question of managing a China allocation as a separate dedicated mandate or an integral part of a global mandate is subjective, and dependent on the asset owner’s particular circumstances. At this early juncture of A-shares’ inception into global indices, the key question of how, and how much, to allocate to China should be an active decision not to be delegated to index makers. Considering the unique profile of the market and how much China influences the global economy, a decision about China could be the most important call an investor can make at this time.

Parts of this text was presented in a speech at the Pension Bridge Annual Conference in San Francisco on April 11, 2018.