Our portfolio manager in Singapore explains why ASEAN might well benefit from the current US-China trade tensions and how the region’s three main strengths should keep economic growth strong.
Share this

All other countries
Download as PDF
by Kenneth Tang, Senior Portfolio Manager
06 April, 2018
In every cloud, there is a silver lining. Could the threat of global protectionism be a potential opportunity for ASEAN?

Fears of an impending trade war have recently scuttled risk markets. With the China and US trade conflict fast emerging as one of the most definitive themes for 2018, it is tempting to swing towards the bearish sentiment and focus on this looming conflict. We prefer, however, to rely on the fundamental growth convictions that lie within ASEAN and analyse the short and medium-term implications of trade wars and what could define performance in ASEAN in the coming years.

Our conclusion remain upbeat on ASEAN, particular the emerging ASEAN economies, represented by the TIPV economies of Thailand, Indonesia, Philippines and Vietnam. The spectre of trade wars might be a threat to global economic growth, but unless trade conflicts escalate, the impact on markets and economies in ASEAN may be more indirect and economic consequences not be as dire as feared. In fact, the likelihood of trade renegotiation and reconciliation could de-escalate tensions and provide the next catalyst for the resumption of an emerging market upcycle.

We see opportunities in countries within ASEAN despite the rhetoric of greater global protectionism. A stand-off between US and China is clearly bad news for trade and export dependent nations, but may result in potential trade diversion and rebalancing, which could benefit from third party country exporters of the targeted products in the medium term. Within ASEAN, there could be potential opportunities in technology manufacturing as well as the food agriculture trade. In manufacturing, US companies located in China within the manufacturing technology supply chains could shift more towards production locations in Thailand, Malaysia and Vietnam. Foreign direct investment between US and China could slow and increasingly be diverted towards alternate manufacturing locations such as ASEAN amid brewing tensions between both major trading partners. In food or poultry imports, China may also take action against US agricultural products by opening new markets such as Thailand as a potential source of food imports.

The Focus on Economic Resilience

The growth story within ASEAN remains largely intact. We remain positive in our convictions on emerging markets, stemming from our 2017 view that growth has bottomed and fundamentals are positive, riding on a synchronised global recovery and reflation. The Fed remains early in its tightening policy and markets are not likely to peak until we approach the end of the tightening cycle. Asia is well placed to benefit from the global synchronised growth recovery in exports and away from the previous cycle of divergence and deflation.

As we enter 2018, however, global macro momentum is starting to moderate on slowing global capex and the growth fade in China. Added with the looming threat of rising global trade protectionism, we believe the theme for 2018 is reverting back to focus on economic resilience. Economies positioned to deliver steady but defensive growth stand to benefit as relative growth winners in light of these challenges. It is also in periods of growth moderation that investors begin to factor valuations more closely and become willing to pay a premium for sustainable quality growth and defensible growth. Emerging ASEAN markets such as Indonesia, Philippines and Vietnam provide such a growth proposition as momentum in the world starts to moderate, and this should even more apparent as we move through 2018.

ASEAN markets stand out as being more defensive in terms of growth outlook over the next three years, with Vietnam, Indonesia and the Philippines positioned well ahead of their peers in this regard (table 1 & 2). These countries are well supported by domestic demand in terms of GDP given the higher uncertainties faced on external growth momentum. We favour these markets for their domestic growth resilience. Fiscal policy initiatives are also accelerating into higher investment spending, which could further sustain growth in the coming years. We also like Singapore, Malaysia and Thailand but believe their economies could be more vulnerable due of their high dependence on trade. In summary, ASEAN is looking better against its market counterparts, as there is a greater proposition in growth due to the domestic resilience of these economies.

Sustainable and Defensible growth in ASEAN 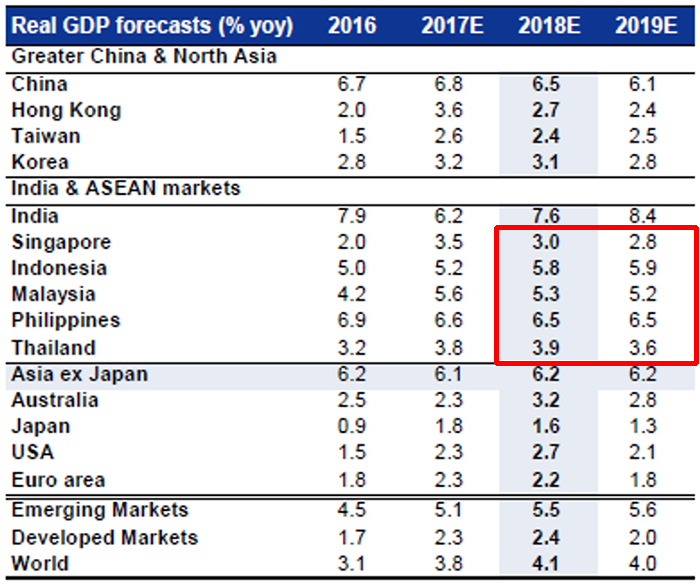 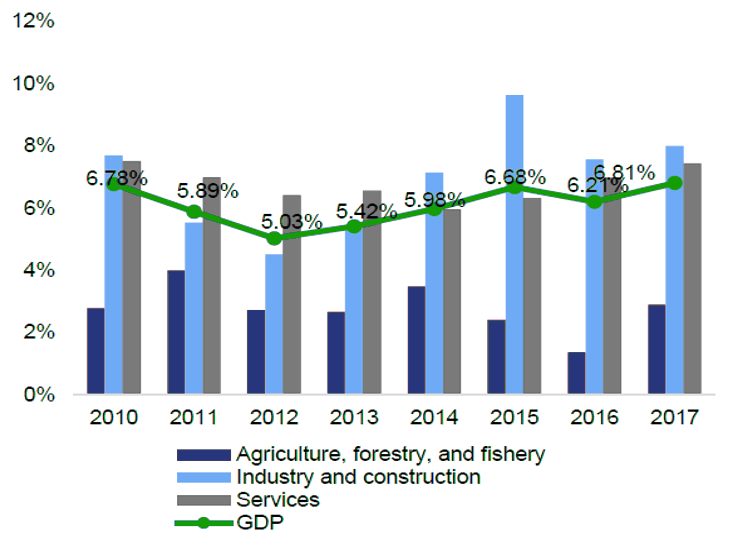 3Rs to transform ASEAN as the next emerging growth opportunity

We believe the longer term structural tailwinds for ASEAN are bullish. Recent noise over trade disputes have only reminded investors why these structural drivers matter. We summarise the ASEAN long term growth opportunity as the 3Rs: the Revived factory of Asia, the Rise of the middle class and the Return of investments.

The revived factory of Asia entails the renaissance of manufacturing in ASEAN since 2016 on the coattails of global trade recovery. The recovery in ASEAN economies has been impressive and the strongest since 2012, with export dependent economies such as Singapore riding high from the synchronised upturn in manufacturing. In 2017, Singapore witnessed a 3.5% y/y expansion in growth, out of which 1.1% y/y or close to 1/3 of the growth was contributed by semiconductor production alone. Vietnam saw an equally robust manufacturing performance of 14.4% y/y in 2017, driving the economy higher by 6.8% y/y.

We continue to believe ASEAN will perform well as a revived manufacturing story in the coming years. This will be primarily led by two structural forces: continued growth in labour force and relative price competitiveness. ASEAN houses one of the world’s youngest and fastest growing labour force, due to its favourable demographics. With most of the developed world and China facing aging demographics and a peak in labour force conditions, ASEAN’s share of global labour production is set to rise. Price competitiveness is another factor. The relative weakness of ASEAN currencies versus the US Dollar since the global financial crisis and commodity peak in 2008, as well as US monetary tapering in 2013, has made them attractive and competitive. This value proposition of ASEAN will likely gain prominence in a world marked by amid rising tensions between the US and China. We expect ASEAN to remain competitive and continue to rise as a dominant manufacturing and production hub within Asia. 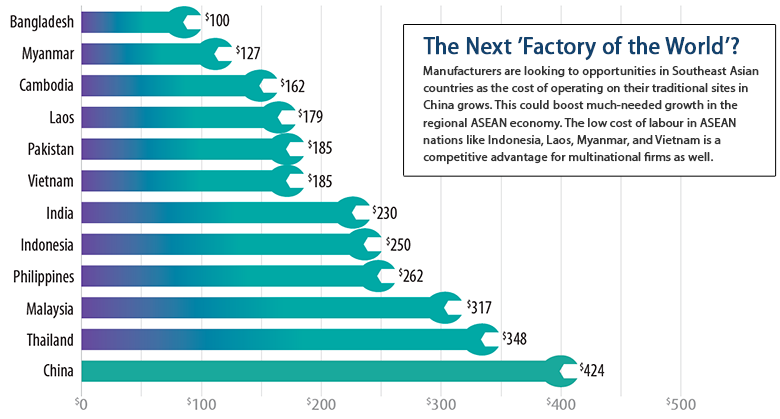 The rise of the middle class is another structural positive surrounding the region’s rich demographics. Within their very young populations, rising affluence in key domestic driven economies such as Indonesia, Philippines and Vietnam is driving upward mobility into the middle and higher aspiration classes in ASEAN. With the bottoming and recovery in energy and commodities since 2016, terms of trade of commodity driven economies such as Indonesia and Malaysia have seen a strong improvement in their fiscal and current account balances. These improvements set a good precedent for growth to recover and fiscal policy sustenance, which is integral to investment in ASEAN. Stronger consumer and business confidence is essential to drive the wealth effect and allow the average consumer households become richer. Rising domestic consumption will feature as a source of strength for ASEAN’s growth story.

Rise of the Middle Class* 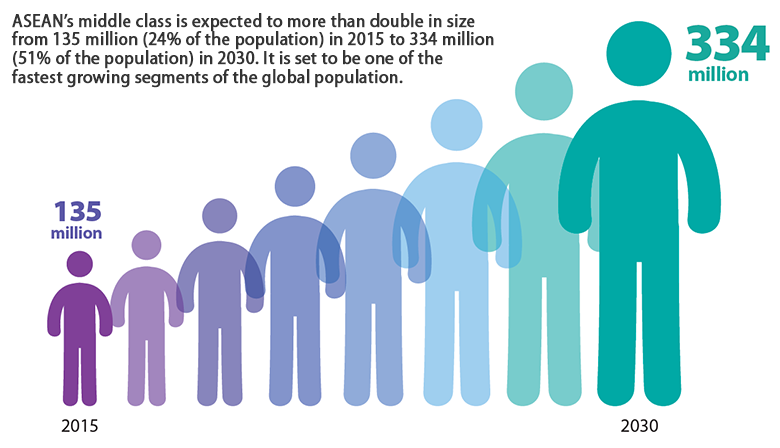 * Middle class is defined as those households with daily expenditures between US$10 and US$100 per person in purchasing power parity.

The return of investments is another structural positive driver for ASEAN, as it is winning the investment race for foreign direct investments (FDI) globally. With the emergence of protectionism, we believe the global FDI opportunity is no longer just a case of absolute growth, but relative growth. The big picture for investments in ASEAN is very compelling, led mainly by Indonesia’s drive for infrastructure. In 2014, McKinsey estimated ASEAN requirements in infrastructure would amount to almost USD 7trn needed to support growth over the next ten years. We also believe global political and economic shifts are driving this change, with China an integral part of this. The focus by China to shift its economy towards consumption and sustainable growth and the pursuit of supply side reforms is accelerating this trend. We believe this will have a profound and positive impact on China’s outsourced FDI into ASEAN in the coming year. With the evidence of supply side consolidation and reforms in many commodities such as coal, steel and oil & chemicals this year, this rebalancing of China is truly well underway. The continued rebalancing of China’s economy from an investment-led economy to a consumption-based one will mean a greater shift away from imports and investments, moving FDI away from China into ASEAN. Within ASEAN, intra-regional trade is also accelerating, further supporting the recovery in investments.

Intra-ASEAN investment on the rise 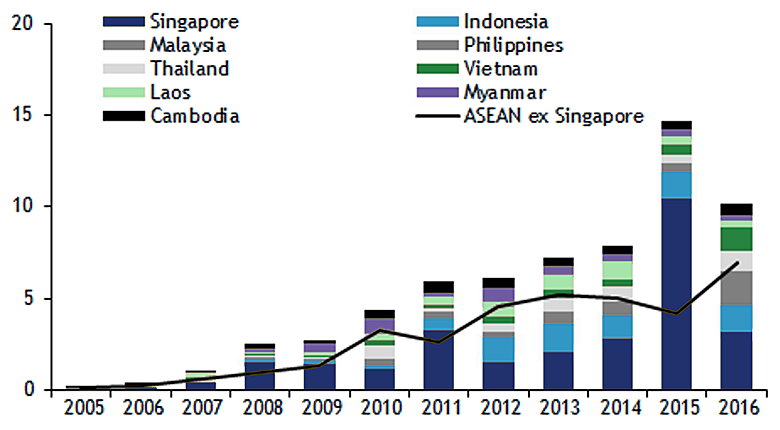 Beyond the current rhetoric on trade frictions, the underlying growth story in ASEAN looks compelling. ASEAN is well placed in the current environment to lead growth at a time where growth could moderate amid greater trade headwinds. The domestic resilience of ASEAN should give investors the comfort that structural fundamentals remain intact and growth remains defensible in the present environment.

Longer term, ASEAN should continue to dominate as an exciting growth proposition within emerging markets, helped by its position as a revived manufacturing centre of Asia, the rise of the consumer class and the attractiveness as a destination hub for investments. Future economic integration and progress in political reforms are also essential for ASEAN to fully deliver as Asia’s best investment proposition. We remain confident on the Greater ASEAN or the TIPV economies to lead growth in Asia in the coming years.

Kenneth is responsible for managing Singapore, ASEAN, Balanced portfolios and covering the resources sector in Asia. He has 21 years’ experience in fund management, both in equity long only and equity long short capacities. Prior to Nikko AM, Kenneth was most recently the lead portfolio manager for PineBridge Investments in Singapore Equity and Balanced portfolios. Kenneth graduated from the National University of Singapore, with a Bachelor degree in Business Administration with a major in Finance. He is a Chartered Financial Analyst charterholder.