Shale to the Chief: Can US Shale Oil Keep Up the Growth?

Having recently returned from the US, Stefan Hansen, Senior Research Analyst at Nikko AM Australia, shares his thoughts on US shale oil production and the potential impact on the oil price.
Share this

All other countries
Download as PDF
by Stefan Hansen, Senior Research Analyst
08 December, 2017

Notice: Originally published on 5 December 2017 and updated on 12 Jan 2018 to reflect new data

We recently visited the key US oil regions to speak with domestic and international oil producers and oil field service providers. The aim being to gauge the growth potential of crude supply, particularly from the major US shale plays, where supply growth has been a key contributor to investor concerns around the short to medium term outlook for oil prices.

The production growth restrictions implemented by the Organisation of the Petroleum Exporting Countries (OPEC) and Russia in order to push global supply below demand has shown relatively high levels of compliance by its members, and when combined with robust demand, resulted in a destocking of elevated world crude inventories. Rising geopolitical tensions and a weaker USD saw the oil price rally strongly up to the close of 2017, bringing with it the risk that further growth in US shale will fill the supply gap.

Chart 1: US crude production, driven by growth in shale, versus WTI oil price

US shale is a unique industry; there are hundreds of production companies operating in the various plays, comprising small family run businesses, to medium sized shale-focused operators, to giant integrated oil companies and we had the opportunity to speak to producers of all sizes during our trip. The mantra “living within cashflow” was a common statement from almost all producers, as they take heed of shareholder activism calling for a focus on returns rather than growth for growth’s sake.

One can understand shareholder frustrations, given the poor track record of equity returns within the US energy sector versus the broader index over the last decade. While a large portion of this can be attributed to the oil price, the sector also holds an unenviable position as the worst performer in terms of return on equity over recent history, as shown in Chart 2.

Chart 2: US Energy sector performance versus the S&P500 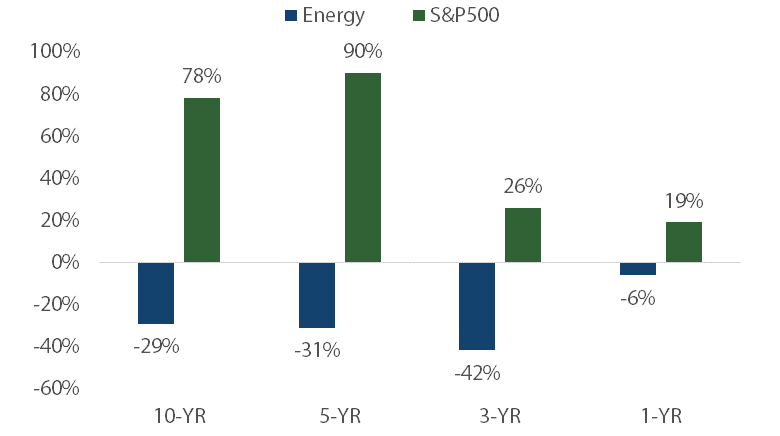 In broad terms, the US shale focused oil producers are looking to bring capital expenditures to somewhere in the order of 100-105% of operating cash flow (OCF), in stark contrast to the level of outspend since 2012 (which peaked at 162% in 2015) as shown in Chart 3 below. Given cashflows have risen somewhat due to higher production bases, capital expenditure for 2018, at this stage, appears to be around 10% higher year-on-year (YoY) for the industry.

...but will they walk the walk?

In terms of output targets, many of the producers are still pointing to 10-30% YoY production growth in 2018, which is broadly in line with consensus expectations for US shale oil growth, with some major brokers assuming circa 1 million barrels (MMbbl) per day will be added by end-2018. This strong growth in output seems contradictory to the modest growth in capital expenditure given the newly found capital discipline. Combine this with an expectation of further cost inflation within the oil field service sector (discussed further below) and a tightening US labour market (particularly in Texas), crude oil production growth of this magnitude seems challenged, without returning to the old days of substantial cashflow overspend.

The difference between production and capital expenditure guidance appears to lie in timing, given 2018 outlooks were last set earlier in 2017, while capital discipline is more recent. As we progress through the US Exploration & Production (E&P) budget season, we should start to see updated production guidance emerge in early 2018.

Oil Field Services (OFS), in particular drilling and completion (fracking), account for around 40–60% of the capital costs for new shale production. Both producers and the service providers have all noted rising costs in the order of +30% YoY (over 2017) for pressure pumping and sand and water disposal. The key driver of the price rises appears to be capacity constraints within OFS, a result of a lack of new and maintenance investment in pumping capacity and sand mines since oil prices fell from the $100 levels in 2014.

That pressure pumping is effectively running at maximum utilisation is clear in the “drilled but uncompleted” (DUC) count (shown in Chart 4 below), which shows a rising number of drilled but uncompleted wells. This rise in the DUC count also means the US rig count data has now become a less reliable tool for investors to gauge shale growth than it has been in the past.

At some point, this pent-up production will be tapped and contribute to new supply, but this will require a commitment from oil producers to accept higher rates again from pressure pumpers. Back in November 2017, it seemed the industry was not sufficiently confident in oil price stability to commit the capital needed to grow completion capacity in line with producers’ bullish oil growth expectations. More recently, given the rise in oil prices, we are seeing some news flow from the pumpers around adding new horsepower to their fleets — a sign that they may have received the commitment of higher rates from the oil companies. It is worth noting, however, that given underinvestment since 2014, lead times for new pumping capacity could be over 9–12 months, creating further headwinds and/or delays to incremental US shale oil growth over the medium term.

What does this mean for oil prices?

Overall, we returned from the US relatively optimistic on oil prices given the potential constraints faced by the US onshore oil industry. While it’s worth acknowledging the fourth quarter 2017 recovery in US shale oil production following a weather-constrained third quarter, 2018 may see OFS constraints become a more pressing issue.

While oil prices have continued to strengthen since the mid-2017 low, which has been supportive of our positive view on the sector, we remain cognisant that higher oil prices may see a return to old habits by the US producers. While this could be a negative for oil prices, this return to old habits would likely come with a higher marginal cost base, given the expectation of higher OFS costs.

Furthermore, oil demand seems healthy. Key international forecasters see demand growing by around 1.3 to 1.5 MMbbl/d, and the self-imposed production cuts from OPEC and its non-OPEC partners do appear to be having an effect as OECD crude inventories decline. With potentially constrained US shale activity in 2018 limiting its ability to fill the supply gap, and assuming OPEC remains disciplined, the market will have to turn to higher cost sources of supply, such as conventional offshore production. However, there has been a distinct lack of deep water exploration activity, which has been un-incentivised to expand. While higher oil prices will slowly lead to a pick-up in conventional exploration, long lead time to production gives us further confidence in the positive longer-term outlook for oil.

Stefan joined the business in 2016. He has 8 years’ experience in equity analysis and a further 8 years within the Petroleum and Chemical industries including oil refining and mining/steel services. Prior to joining Nikko AM Australia, Stefan was a Vice President within Australia Equities Research at Morgan Stanley. Previously, Stefan held Equities Research roles at Austock and Aegis Equities research. Stefan has sector responsibilities for the Mining and Oil & Gas sectors.