A separate allocation to Asia IG offers European investors a way to mitigate risk within their EMD exposure.
Share this

Making the Most of Emerging Markets

Throughout 2016 and 2017 YTD – Emerging Markets Debt has performed well for investors. This in turn, has attracted strong flows into the asset class, and caused spreads to continue to tighten, such that Corporate EM Bond Index (CEMBI) Broad is trading at approximately 253bps2 and EM Bond Index Global (EMBIG) Diversified at around 304bps3 (compared to 350bps and 400bps, respectively, in 2016).

However, there are a number of potential key macro risks for EMD:

Given these factors, European investors in EMD should consider how they are positioned and whether they want to reallocate within EMD to lower beta segments of the universe in order to mitigate risk, without sacrificing too much in yield.

The EMD universe has grown so that there is now sufficient size and diversity for investors to take selective positions. CEMBI and EMBI make up a combined market size of USD 1.3 trillion with 506 different issuers. Within EMD, Asia Credit IG is now a significant segment in its own right. The JP Morgan Asia Credit Index in Asia IG alone is now USD 586 billion.

Asia as a Component of EMD

There are significant differences between the different regional segments of EMD. LATAM and Emerging Europe for example, which make up 37% and 20% of the combined CEMBI and EMBI indexes, have had a much higher beta over last four years compared with Asia (which composes 30% of combined total). In fact, Asia IG and HY Credit returns have been less volatile than their US counterparts. We believe there are structural reasons for this.

Why is Asia Credit Volatility so Low? 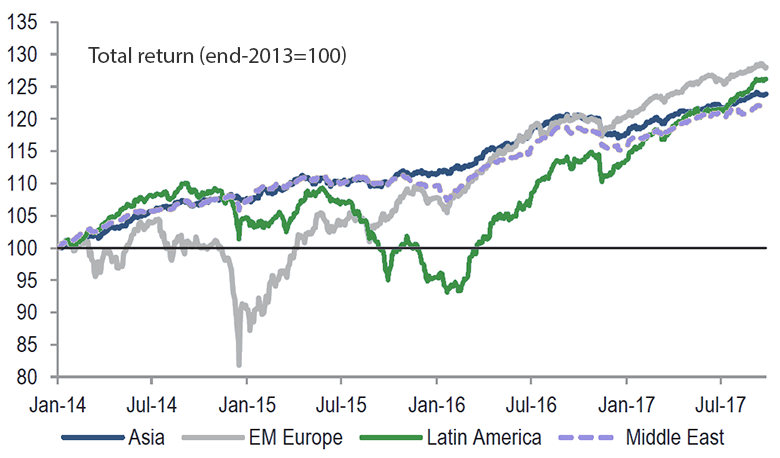 Asia IG is less volatile than US IG 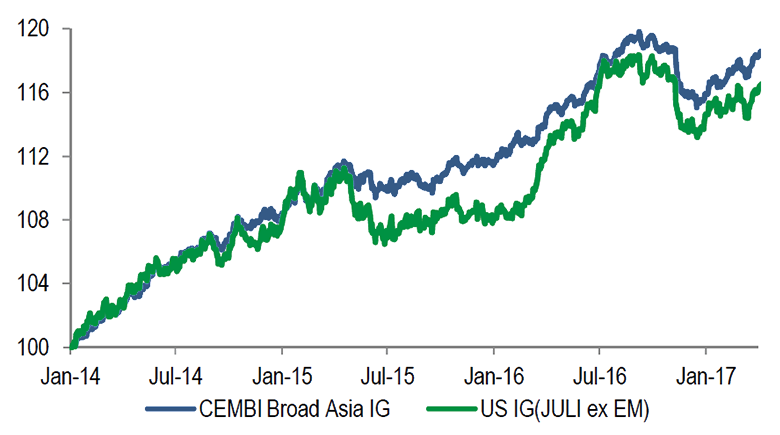 There are four key reasons why the volatility for Asian Investment Grade (IG) Credit in particular have been so low compared to other segments of EMD:

Fundamental Growth – Asia is the fastest growing region in the world (IMF forecasts growth of 5.5% in 2017 vs 4.5% for EM total ). This not only supports the income to repay debt, but also fuels funding needed for expansion. The clearest example of this is China. For China to fund its rapid growth (6.7%)4 it has become a key supplier of debt issuance (both in local currency and USD). At the same time, given its high savings rate as a percentage of GDP (49%)5, it is also a key source of demand for debt as local capital seeks appropriate investments.

Technical Factors – A critical difference between Asia and other EMD regions is the percentage of local ownership. Unlike Latin America, which only owns 11% or their own debt issuance, or the Mid-East which owns 37%, Asian investors own >78% of their own debt – which has helped dampen volatility in the market significantly. Much of this investment (42%) in new issuance is from Chinese banks, but other countries are also key investors (Malaysia 27%, HK 20%).

Ownership of EMD by Region 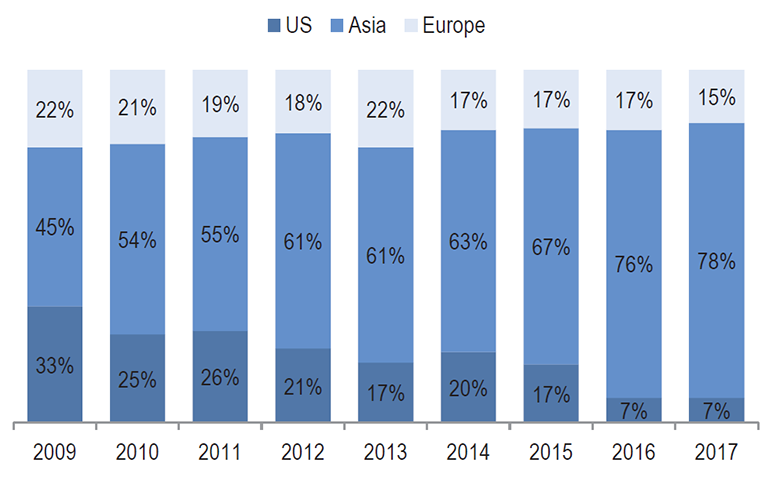 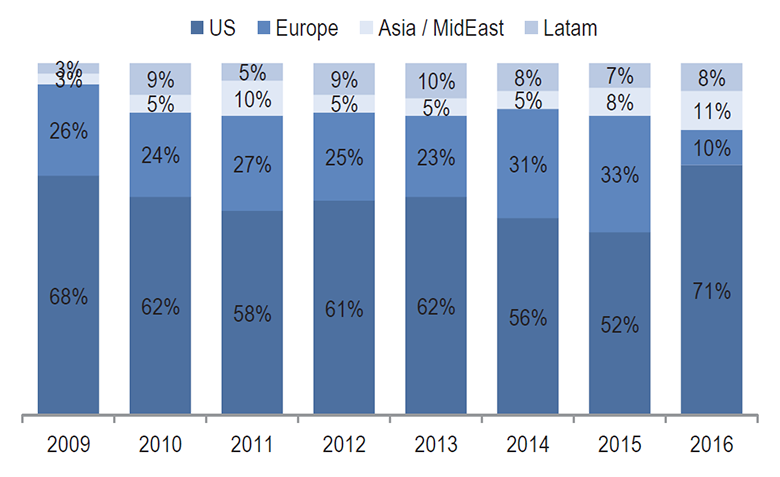 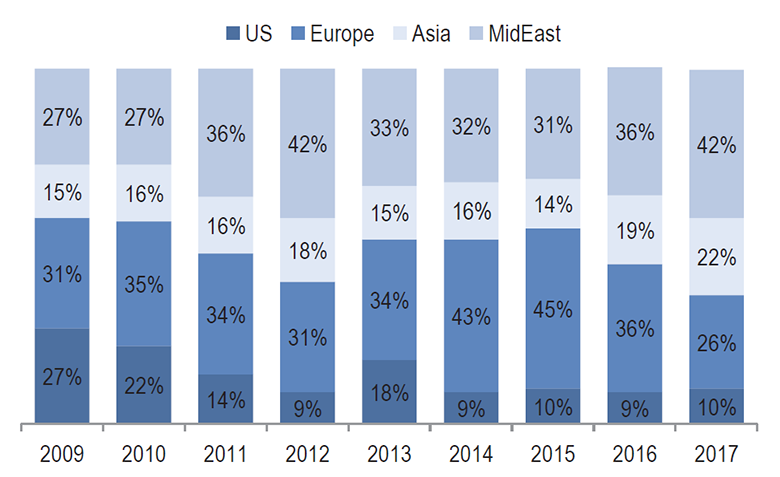 Credit Quality – Linked to the fundamental growth story and diversification is the emergence of many new investment grade issuers in Asia. In 2006, only 90 issuers could access Investment Grade markets on the JACI index, while in 2016 there were 251. As the recent upgrade of Indonesia to investment grade shows, the integration of more Asian countries in global supply chains has allowed them to increase their credit quality.

Credit Metrics - Relative to other Emerging Market regions, such as LATAM. EM Europe and Middle East, net leverage for Asian Investment Grade debt has declined since 2013, as investment grade companies have built up their liquidity buffers. As with a lower reliance on external flows, the lower net leverage means that Asian IG Credits are better protected against a downward correction in EMD.

The fundamental factors underlying the expansion of Asian debt (economic growth, high savings rates and the high level of investment in local debt) are key reasons not just for the rapid growth in the asset class as a part of EMD, but also for its low volatility in recent years. Particularly in USD denominated IG debt, we believe that the structural reasons for higher levels of return compared to developed markets (and at low levels of risk compared to other developing markets) are likely to continue. 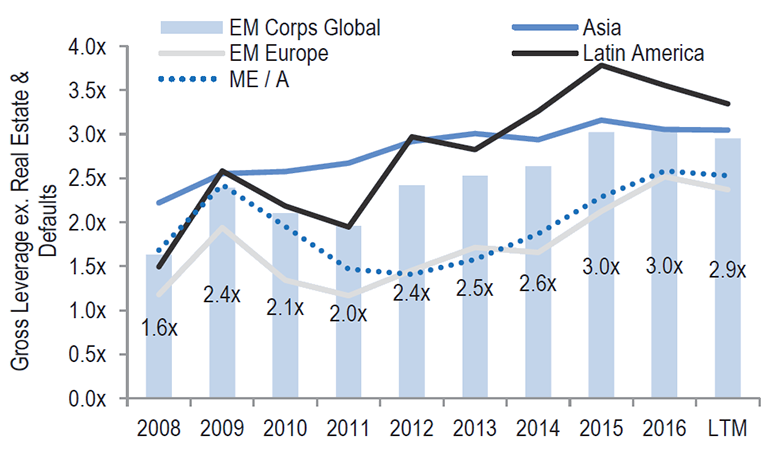 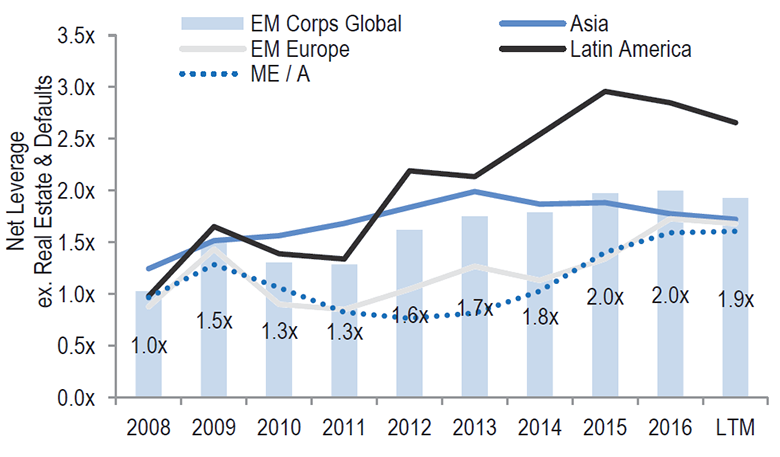 What is the Trade-Off for European Investors?

There are two clear costs to re-allocating defensively from higher beta segments of Emerging Market Debt, and taking a separate allocation to an Asia Credit Investment Grade fund:

More moderate returns – JACI Investment Grade has returned 3.8% 1H 2017, which is below EMBIG at 6.2% and CEMBI Investment Grade at 4.9%6. Furthermore, if we look at the higher beta segments of CEMBI, LATAM IG has produced 6.9% returns and EM Europe IG has delivered 4.6%7. However, for a European Investor in European Corporate Debt facing returns of 1.21% over the same period, Asia Credit IG credit still represents a substantial yield pick-up.

Lower Diversification benefits - The correlation of Asia IG Credit to European Corporate Debt (iBoxx) on a 5-year (5Y) basis is approximately 70%. This is higher than the 5Y correlation for the CEMBI index as a whole (64%), as LATAM and EM Europe have a much lower correlation than Asia (57% and 30% over the same period).

However, as regional sources of demand continue to diversify, we would expect the correlation between Asia with the European debt markets to decline. Both through trade and domestic diversification, China is shifting from export-led to domestic consumption and now accounts for nearly 20% of regional exports8. The growth in commercial services trade within region, particularly in areas such as tourism, healthcare and education, should also drive diversification away from commodities and manufacturing.

Even with more moderate returns and higher correlations than other parts of EMD market, the low volatility and higher returns of Asia Credit Investment Grade produce a significant improvement in the investment frontier for European investors. The chart below shows the scenarios with allocations of USD denominated Asia Credit IG and European Agg Credit based on 3Y average volatility and returns.

Because of the relatively high volatility in European Agg on a 3Y basis (3.56% annual average) a 50/50 allocation into Asia Credit would significantly reduce the portfolio volatility to 3.03%, while the overall portfolio return would increase from 3.61% to 4.05 % Indeed, the improvements in efficient frontier continue through to a 90% allocation to Asia Credit.

Hence, if a European investor is concerned about the downside risk of EMD, but wants to maintain some exposure to get a yield pick-up, it would make sense to re-allocate to Asia Credit IG to lower the overall volatility of the portfolio and minimize the decline in returns. 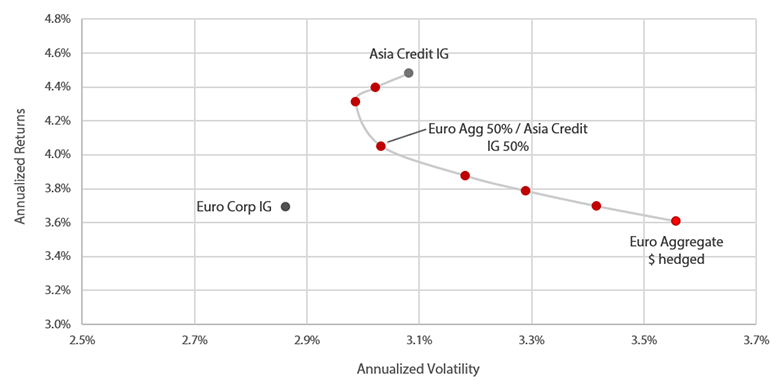 Source: Nikko AM analysis based on Bloomberg data as of August 2017

The benefits of a separate allocation to Asia High Grade within EMD:

A separate allocation to Asia IG offers European investors a way to mitigate risk within their EMD exposure. There is some trade off in terms of returns and diversification against a broad EMD exposure, but it significantly reduces the downside volatility exposure that comes with high beta EMD regions.

Even with a higher correlation to European Agg, the much lower volatility of Asia Credit IG versus its slightly lower returns to CEMBI, means that its inclusion would enhance the efficient frontier of a European debt investor’s portfolio, more than simply reweighting away from CEMBI.

From a long-term perspective, the fundamentals of Asia Investment Grade support “quality yield” pick-up. We believe there are long-term fundamentals driving low volatility. Furthermore, the expansion of issuance in USD debt as regional economies continue to integrate in global supply chains will drive growth and diversification of USD denominated IG debt.

Jian Wei currently manages institutional Asian Fixed Income portfolios and is mainly responsible for shaping portfolio strategies across the firm’s Asian Investment Grade Credit mandates. He also has experience managing various strategies ranging from fully active benchmarked funds to passive mandates. Jian Wei joined Nikko AM Asia in August 2011. Prior to this, he was with Prudent Asia Capital Management and UOB Asset Management where he specialised in bank capital and global credits. He has 17 years of experience in the financial industry, combining 10 years of credit-related experience in the asset management industry, and 7 years as an economist with Bank Negara Malaysia in the Monetary Assessment and Strategy Department. Jian Wei holds a Bachelor of Arts (Economics) from Cambridge University, United Kingdom, and is a CFA® charterholder.