The release of the second quarter data on aggregate Japanese corporate profits confirms my twelve-year theme about improving corporate governance in Japan and how investors should not worry about the slow domestic economy.
Share this

All other countries
Download as PDF
by John Vail, Chief Global Strategist
06 September, 2017

Last night’s release of the second quarter data on aggregate Japanese corporate profits confirms my twelve-year theme about improving corporate governance in Japan and how investors should not worry about the low-growth domestic economy. Overall corporate pre-tax profit margins in Japan accelerated to new highs (nearly double the level of the 1989 bubble period) due to the continuation of long-term structural corporate-governance enhancements. Decent global economic growth and a relatively steady Yen also helped the manufacturing sector’s profits, while the non-manufacturing sector’s, which is nearly entirely domestically focused, hit another record high. 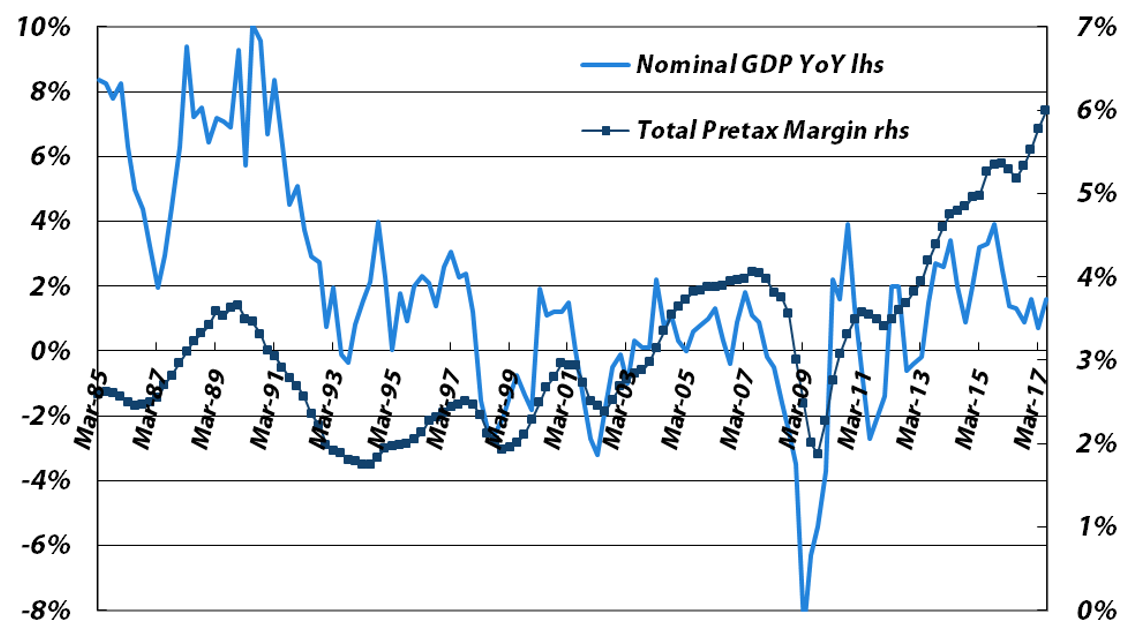 ...and for Non-manufacturers (excluding financials): 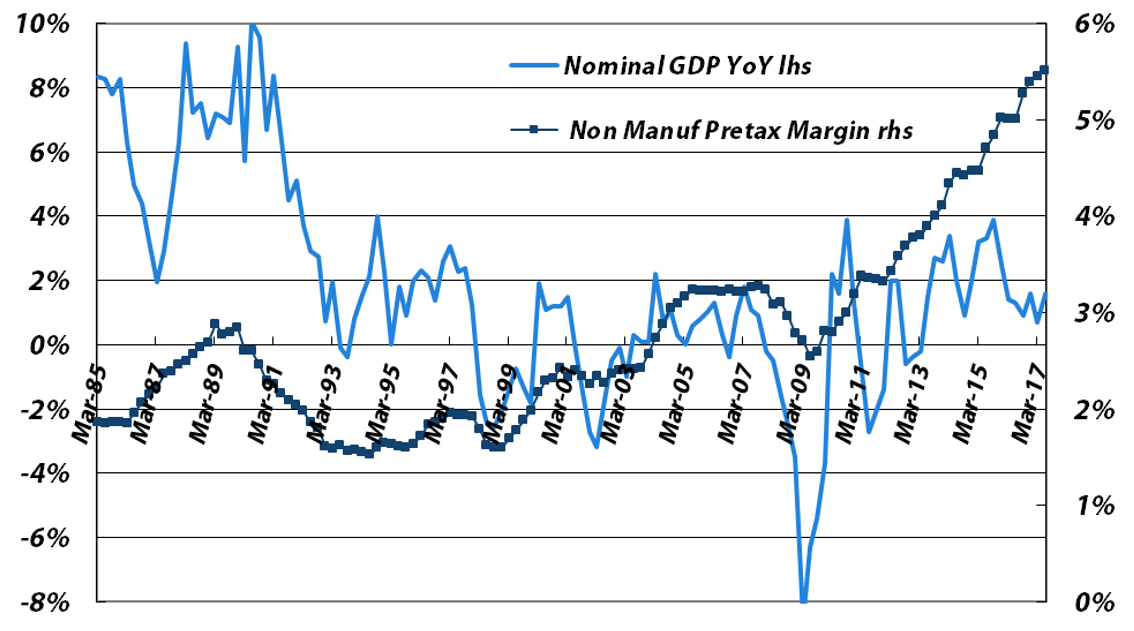 The fact remains that partly due to the encouragement of the Abe administration, Japanese corporations are continuing their structural shift towards higher profitability. Indeed, Abenomics is "icing on the cake" of the "Show Me the Money" corporate governance improvement that I have long-highlighted on Japan.

Indeed, while increasing the number of independent directors and other recent governance issues are very important in the intermediate term for Japan, it is crucial for investors to understand that the profitability message has actually been understood by most Japanese corporates for over a decade. This is shown by the divergence in the profit margins from the trend in GDP growth in the charts above, showing that even though GDP growth has remained subdued, profit margins have surged.

Since the early 2000s, Japan has embarked on major rationalizations in most industries, with the number of players usually reduced from seven down to three or four. The fruits of this restructuring were slower to ripen than in Western world examples, and they were hidden by a series of crises (the Global Financial Crisis of 2008-2009, the strong Yen period of 2009-2012, the 2011 severe Thai floods that halted a large amount of auto and electronics production, several periods of political turbulence with China that included boycotting many Japanese goods and, of course, the tsunami/nuclear crisis of 2011), but since Abenomics began, the global backdrop for Japan has been stable and there have been no domestic crises, thus allowing these fruits to ripen.

Profit margins will likely rise further in the quarters ahead due to a positive global macro backdrop and as many corporate sectors are continuing their rationalizations and cost-cutting that will help support their profit margins. One should also note that the Ministry of Finance statistics cited in this report do not cover post-tax income, and due to recent corporate tax cuts, the overall net profit margin (excluding extraordinary write-offs) has expanded even more sharply than the pre-tax data shown above, thus “showing the money” to shareholders to a very large degree through dividends and share buybacks.

In my view, Japan is the only major country that is going through a structural improvement in corporate governance, and thus deserves special attention by global investors.