Despite the uncertainty surrounding the time it will take before the formation of a new government, we do not think there is risk of major policy change in Germany. The election outcome, however, will likely weigh on the aspirations of France’s Macron for deeper Eurozone integration.
Share this

Unsurprisingly, Angela Merkel will continue as German chancellor for a fourth term. But the rest of the election results were perhaps less expected. Germany went to the polls on 24 September, and Merkel’s centre-right Christian Democratic Union/Christian Social Union (CDU/CSU) party emerged as the largest party in parliament, albeit with a smaller share of the vote than had been suggested by recent polls and at a post-war low. Its partner in the ‘Grand Coalition’, the Social Democrats (SPD), also saw its worst post-war result with 20.7% of the vote. The SPD subsequently announced it would not join another coalition, instead opting to form the main opposition party.

The big winners included the far-right populist Alternative for Germany (AfD), which garnered 13% of the vote, granting it entry into parliament for the first time, and as the third-largest party. The business-friendly Free Democratic Party (FDP) and the Green Party also improved their standings from the previous election, with about 10.5% and 9% of the vote respectively. 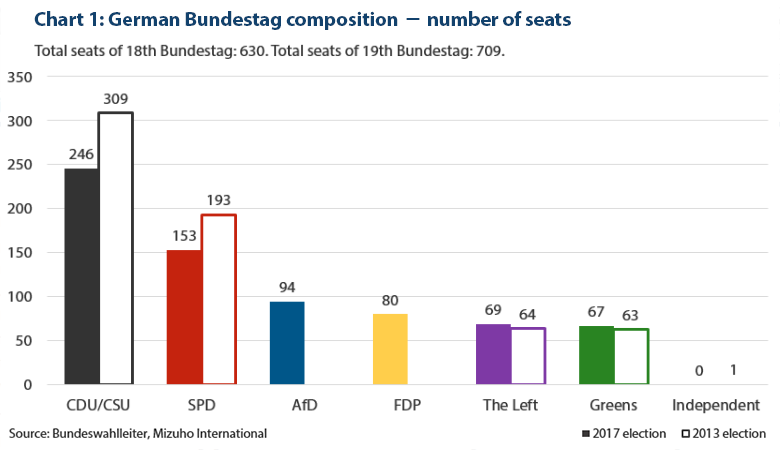 The challenging road ahead

Now, Chancellor Merkel faces weeks, if not months, of difficult coalition negotiations. She will likely end up forming the ‘Jamaica’ coalition, named for the party colours of the CDU (black), FDP (yellow) and the Greens. That said, these parties have conflicting positions on issues ranging from Eurozone integration, to immigration, to the economy and the environment.

Well-aware that Merkel’s previous junior coalition partners ended up with hefty defeats in the following elections, the Greens and the FDP will be looking to ensure there is enough in the coalition deal to differentiate themselves from Merkel and her politics. We expect both parties to focus on their agendas in specific areas (education and digitalisation for the FDP, and the phase-out of petrol and diesel engines by 2030 for the Greens), while leaving other fields to the CDU. In this way, they will hopefully in four years be able to show some meaningful results to their voters.

Nevertheless, negotiations will be complex, and both the FDP and Greens will enter the talks with substantial pre-conditions. For instance, the FDP deeply opposes French President Emmanuel Macron’s campaign proposal for a more integrated Eurozone, with a shared budget and its own finance minister. Any agreement that France and Germany eventually reach regarding the Eurozone may not have the scope that Macron had hoped for.

On top of this, Merkel will also have to deal with the conservatives within her own party. She has been criticised for positioning the party in the political centre, which has lost them voters to the AfD. It remains to be seen if she will manoeuvre more to the right to win some AfD voters back. Her future policies on migration and refugees will therefore be closely watched.

The CDU will also have to resolve differences with its Bavarian sister party, the CSU. The AfD’s surge of popularity in Bavaria has sparked concern that the CSU may lose its majority in the Bavarian state elections in 2018. The CSU could therefore be tempted to take a harder line on immigration policy. It has indicated that it will be negotiating for a hard cap on the number of refugees entering Germany, a position that Merkel, as well as the FDP and Greens, have rejected.

Coalition building talks are not expected to begin until mid-October, after state elections in Lower Saxony, one of Germany’s largest states. Merkel is hoping to have a new government in place by Christmas.

In the event that coalition talks fail, however, there is a risk that new elections are called and Germans would have to go through the process of voting for their parliament again. However we think this is very unlikely to happen. None of the parties involved would want to be seen as responsible for bringing the country to a standstill by triggering snap elections.

Ultimately, despite the differences in ideology, all the involved parties know it is their responsibility to come up with a solution and form a government. Germany, in its democratic history since 1949, has always been ruled by coalition and politicians are used to reaching consensus. Merkel, too, has significant experience in bridging differences and working towards agreement. While it might take a little longer this time, we believe that the CDU, FDP and Greens will eventually form a stable government.

Despite the uncertainty surrounding the time it will take before the formation of a new government, we do not think there is risk of major policy change in Germany. As we stated in our pre-election commentary, it is unlikely that any government coalition will implement significant structural reforms.

The election outcome, however, will likely weigh on the aspirations of France’s Macron for deeper Eurozone integration. Germany’s finance minister Wolfgang Schauble, who was largely seen as pro-European, is stepping down to become speaker of the Bundestag. The finance ministry could now go to the FDP, which, as previously mentioned, would likely be less amenable to Macron’s proposals.

We continue to see attractive opportunities within German corporate bonds. Our preference for the health care and auto parts sectors remains unchanged, as they remain beneficiaries of the strong economy and continue to provide appealing yields.

Holger joined Nikko AM in July 2015 to help spearhead the firm's Global credit capabilities. Prior to Nikko AM, Mertens worked at Lazard Asset Management and held a variety of roles based in both Frankfurt and London, where he was Lead Portfolio Manager for Corporate Bonds. Before Lazard, he worked for Deka Investment Management where he was a Fund Manager/Analyst for Corporate Bonds. Mertens began his career at DG Bank Warburg as a Fixed Income Trade & Sales assistant. He holds a Masters Business Management and Economics from Frankfurt School of Finance & Management and is a CFA® Charterholder.