We identify the fundamentals that have supported Australian housing and the signals that investors should look for to determine if this period of positive appreciation is coming to an end.
Share this

All other countries
Download as PDF
by Chris Rands, Portfolio Manager
03 August, 2017

Over the past five years, multiple forecasters have called the decline of Australian housing only to see prices continue moving from strength to strength. Indeed, some global investors are watching for a downturn as this could foreshadow a decline in other developed markets. In this article, we identify the fundamentals that have supported Australian housing and the signals that investors should look for to determine if this period of positive appreciation is coming to an end.

Australian house prices have continued their meteoric rise since the start of the decade, increasing by approximately 6% per year since 2010. This means that house prices have risen by over 40% since 2009, reaching historically high levels. Over the same period, households have seen only limited wage growth, which has caused both household debt-to-income and household debt-to-GDP to rise to all-time highs. In 2016, household debt-to-GDP surpassed 120%, which is over 20% above the level where the US peaked in 2007 before its housing crisis. Because of these metrics, many forecasters believe that Australian housing is due for a correction.

Chart 1: Australian and US house prices vs household debt-to-GDP 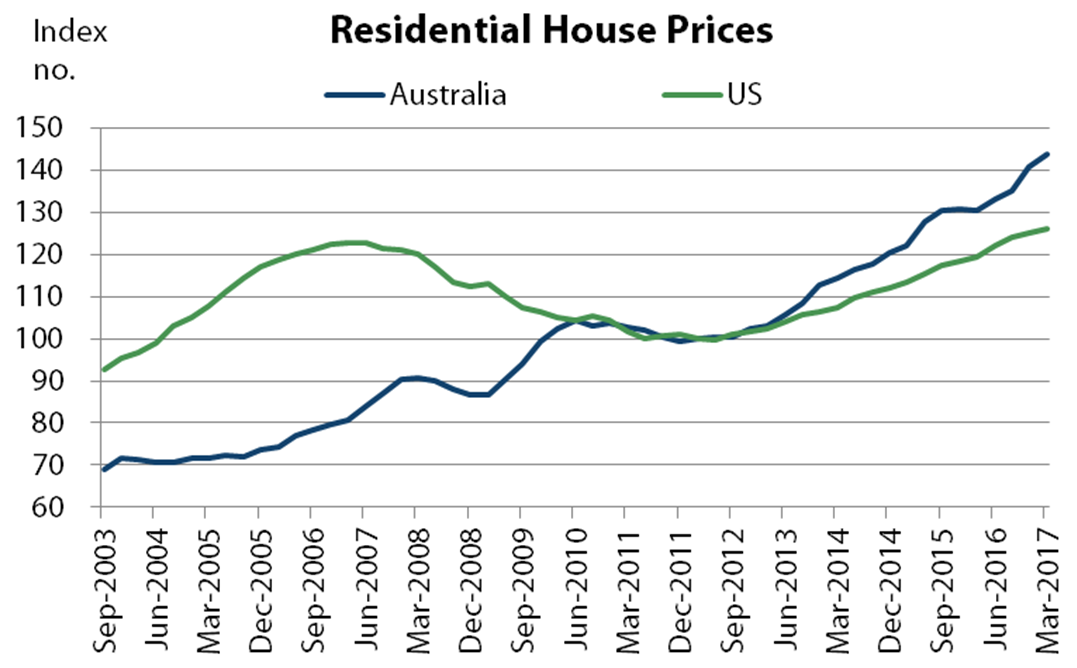 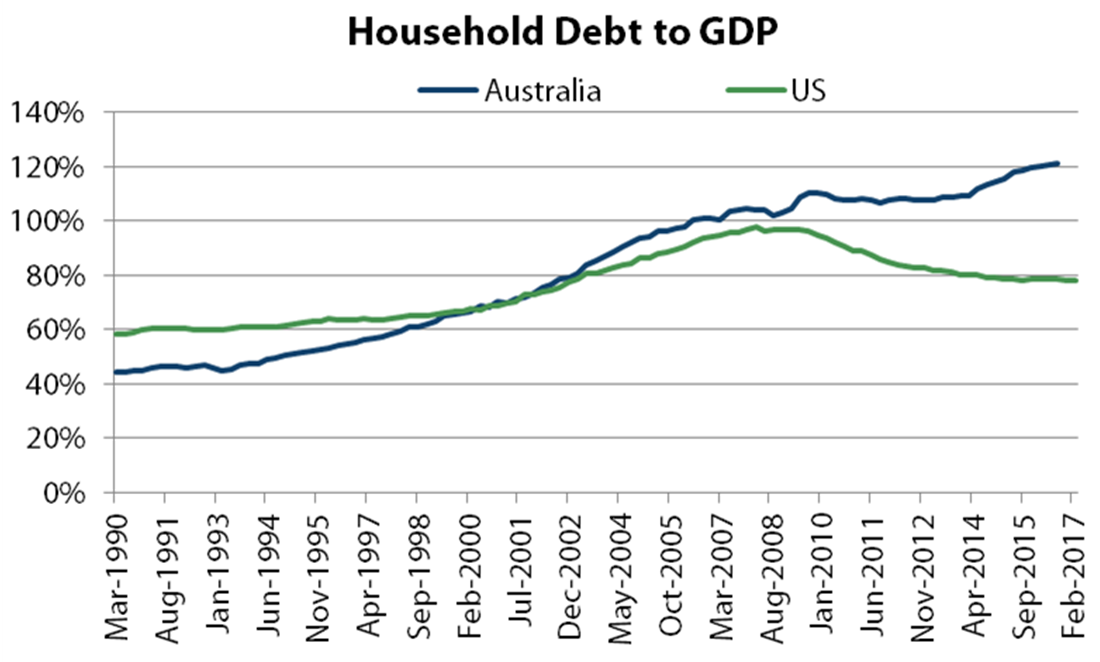 While Australian house prices have risen strongly over the past five years, a more nuanced picture emerges when looking from a regional perspective. The capital cities of Sydney and Melbourne have seen very strong house price appreciation, Brisbane and Adelaide only moderate appreciation and Perth has actually declined over the past two years. So despite Australian house prices rising quickly overall, certain areas have experienced the bulk of the increases—in particular Sydney and Melbourne, which garner the front page stories calling for imminent decline.

A recent speech from Reserve Bank of Australia (RBA) Governor Phillip Lowe identified this disparity by showing that house price-to-income ratios for New South Wales (NSW) and Victoria have moved to all-time highs while the other states remain around average levels for the past 15 years. This means that it is the eastern states of NSW and Victoria which potentially face the biggest housing problems. 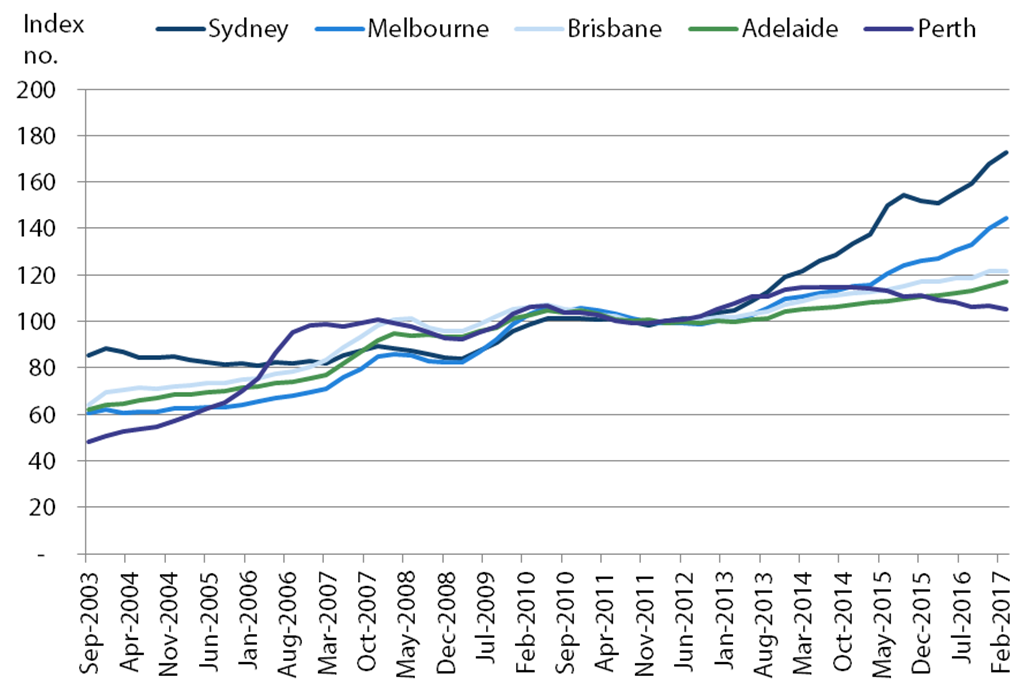 Looking purely at house prices and household debt-to-GDP, the Australian housing sector looks stretched. However, there are positive features of the Australian market which have helped to support these lofty valuations and which must be considered when analysing the risk of decline.

The Australian mortgage system operates on a full recourse basis, meaning that should a borrower default, the lender is able to pursue all the borrower’s assets. In addition to this, the social stigma attached to bankruptcy in Australia makes it fairly undesirable to default on a loan. Because of these two factors, Australians typically prioritise the repayment of their mortgage in times of stress and continue repaying a loan for as long as possible. Further, the Australian mortgage market has more robust underwriting practices than the US saw prior to the GFC, with the Mortgage & Finance Association of Australia stating in 2015 that non-conforming loans comprise less than 2%1 of the Australian mortgage market, a figure which reached close to 15%2 in US at the peak of the property market bubble.

Another positive for the Australian market is that strong population growth and international migration over the past 15 years has led to continued demand for housing. Using dwelling completion data, the RBA shows that during the 2000s “the rate of home-building did not respond to the faster population growth”3 and it wasn’t until the past few years that housing supply was expanded at a fast enough rate. Therefore, while increased supply continues to come on to the market, this is partly alleviating the shortfall of the 10 years prior.

Furthermore, over the past few years foreign demand for Australian housing has been strong, with Chinese buyers showing a particularly strong interest. While some would argue that this demand could fall away quickly, certain features of the market mean that this should have only limited effect. The main reason is that the Foreign Investment Review Board (FIRB) maintains a policy which aims to “channel foreign investment into new dwellings” to create “jobs in the construction industry”4. Because of this, foreign investors can be limited in the established home market, with National Australia Bank estimating that foreign investors account for approximately 11% and 7% of new and established home sales, respectively5. Hence while foreign buyers have shown increasing levels of demand, this is still only a relatively small part of the overall market compared with local buyers.

The third positive for the Australian housing market is that while debt-to-GDP is high, debt service ratios remain good. This is because interest rates and mortgage rates are close to all-time lows, allowing households to service these large levels of debt. In this respect, as long as interest rates remain low, households will be able to afford the repayments to continue servicing their loans. 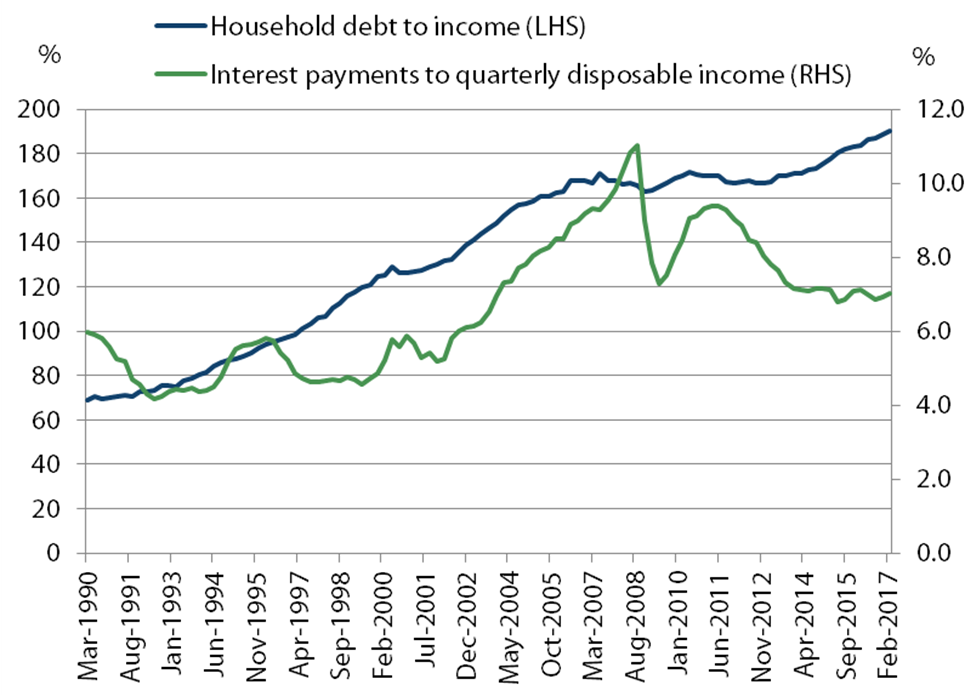 Taking these three positive factors into account, we expect that for housing to decline significantly there will need to be an event that leads to borrowers being unable to meet their repayments.

What could go wrong?

Given that most warnings on Australian property are about wholesale declines rather than a manageable fall, what might the catalyst be to make mortgages unaffordable? In our view, there could be two main threats to the housing market: rising interest rates causing borrowers to be unable to afford repayments, or rising unemployment which makes households incapable of making repayments. Neither of these outcomes currently look likely in the short to medium term—hence we believe that both house prices and demand for housing will remain robust, although we will be watching for any deterioration given the build-up of household debt.

The most obvious reason for households being unable to repay their mortgage is that rising interest rates cause mortgage repayments to become unaffordable. Currently, interest coverage ratios remain strong as mortgage rates are at all-time lows; however, due to the high levels of debt in the economy this metric will deteriorate quickly if interest rates rise (see a previous article, ‘3% is the new 5% for the Australian cash rate’ for how we calculate this). 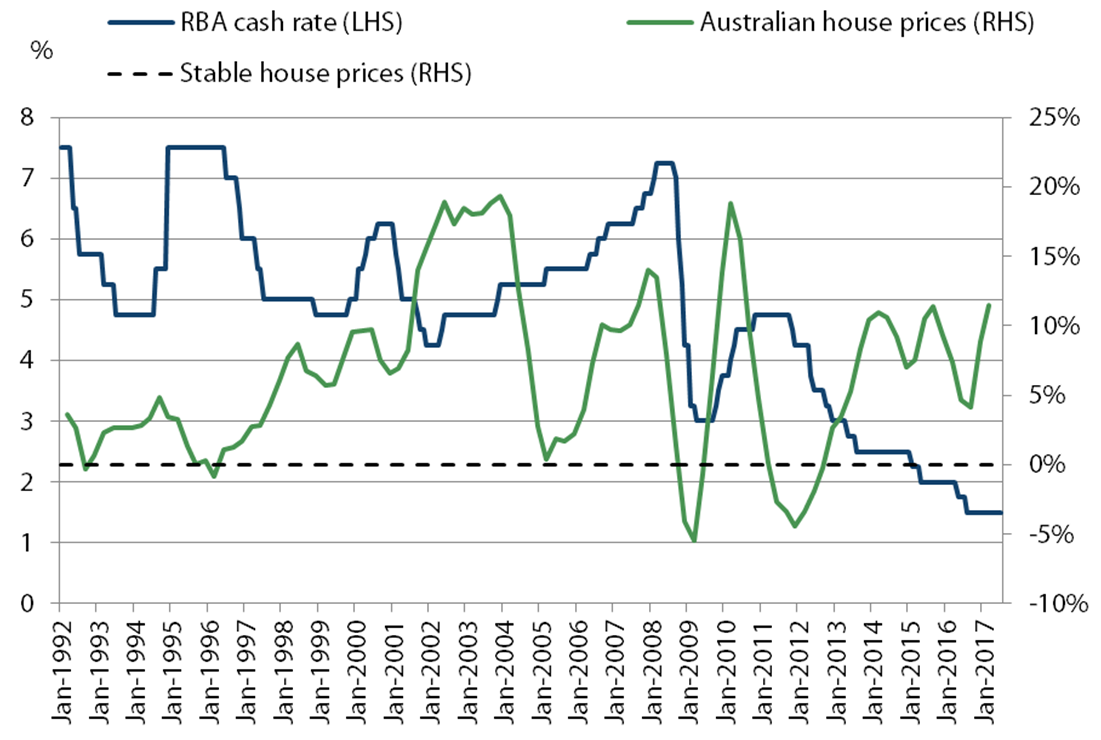 Over the short term, the RBA has a stable cash rate outlook, with markets forecasting no rate hikes over the next 12 months. This implies that households are not going to see significantly higher mortgage rates over the next 12 months and will continue to face average levels of interest coverage. Should the RBA move to a more hawkish bias and start lifting cash rates higher than the market expects, then this should raise some concern for investors exposed to housing. However, at the moment this looks like a relatively low probability outcome. 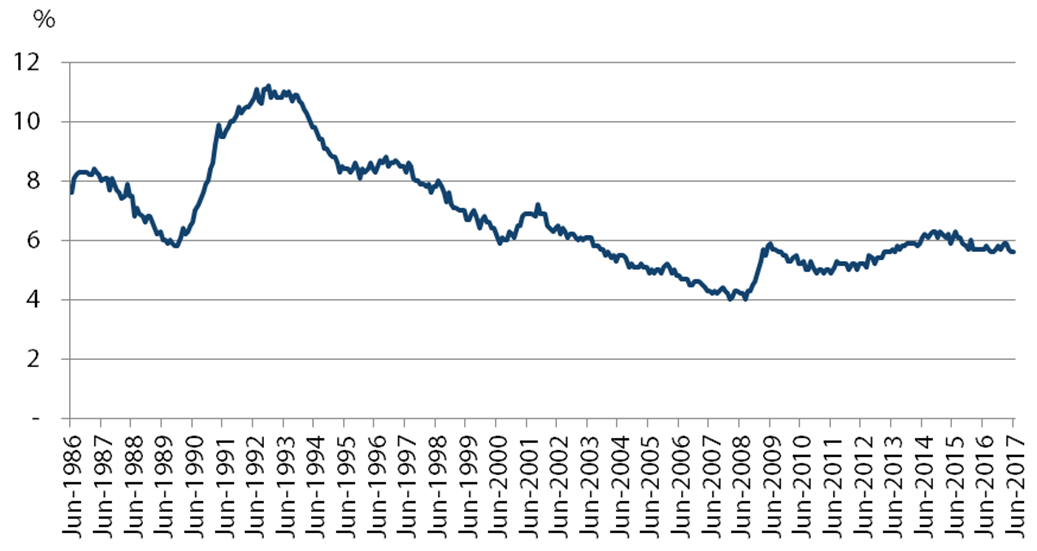 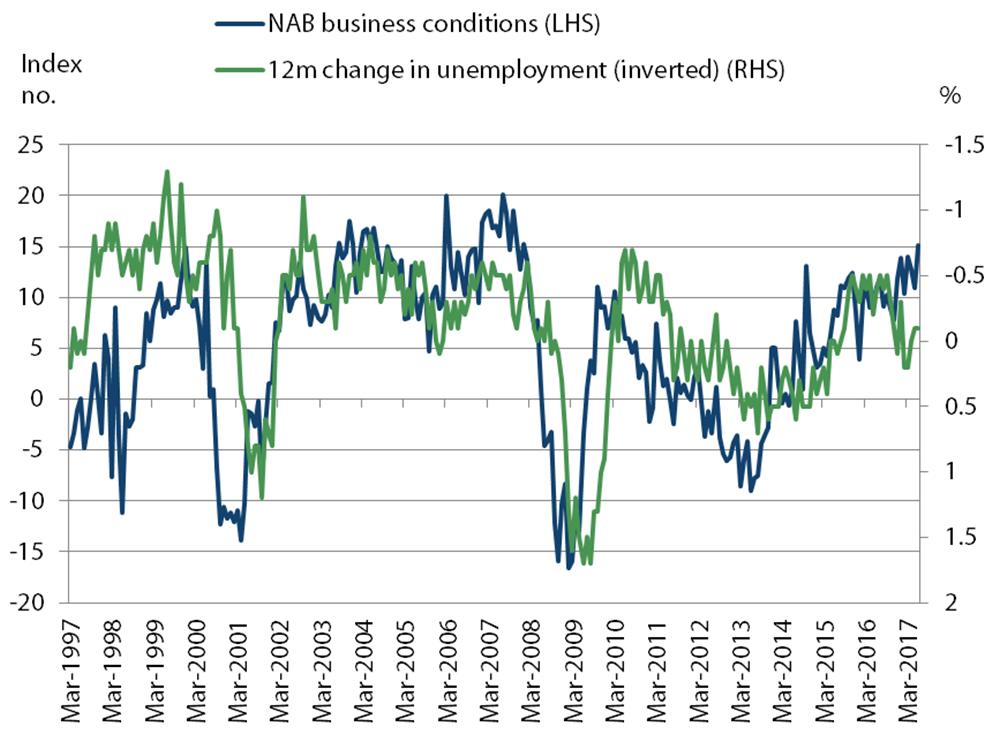 Stable for now, but watch for signs of household stress

Looking at the outright level of Australian house prices and with the memory of the US housing market crash still imprinted on investors’ minds, many are fearful that prices will fall catastrophically from here. However, investors should be aware of the fundamentals that have driven prices to their current levels and what could cause them to fall. As long as both unemployment and interest rates remain low, it’s hard to envisage huge declines in the Australian market. In this environment it is more likely that prices move sideways, allowing wages and income to catch up.

For investors that are worried about house price declines, it will be important to monitor both unemployment and interest rates as key metrics for borrowers’ ability to pay. If either of these begin to rise and put pressure on Australian households, then investors will be rightly concerned about the implications for Australia’s housing market.