China’s deleveraging – When and how will it end?

China’s dual goals of deleveraging and maintaining strong growth may not necessarily conflict, but they certainly pose a delicate balancing act for the government.
Share this

China’s deleveraging campaign has been underway for more than three years, starting with the real sector and progressing to the financial sector. While excesses in key industrial sectors have been reduced and the overheated bond and currency markets have also corrected sharply, the country’s aggregate debt ratios are still not declining. In fact, by the Bank of International Settlements’ (BIS) measure, China’s credit gap remains well above the early warning threshold of past financial crises. There is, thus, much more to achieve on deleveraging. We think the game changer would be to bring fresh capital flows into the bond market to balance the opposing pressures between deleveraging and growth. The recently launched Bond Connect is a big, possibly final step to allow China’s inclusion into global bond indices.

Too much of a good thing, however, comes with risk – the sheer size of the Chinese domestic bond market could entail up to USD200bn of inflows upon its inclusion into three global bond indices. Not only does China need to let go of managing its currency by then, it also has to be careful not to let its economy overheat again. If that latter scenario pans out, the option to close up the capital border may no longer be available given China’s status as a member of the IMF Special Drawing Rights (SDR) basket. Quantitative easing comes to mind but this is still a very remote risk. For now, China seems to have planned well the sequencing of policy steps and regulatory changes in the past few years towards rebalancing its economy. We are turning positive on both China fixed income and currency markets.

China’s dual goals of deleveraging and maintaining strong growth may not necessarily conflict, but they certainly pose a delicate balancing act for the government. It is a valid concern that deleveraging at all costs could push the economy into a deflation trap that would only deepen the debt crisis. This is probably what drove the PBOC to relax liquidity in the interbank market in June after three quarters of tightening interbank liquidity, several macro prudential measures and two rounds of rate hikes. Much of the real GDP growth rebound from H2 2016 to H1 this year was technical in nature, mostly from inventory restocking and a supply-squeezed property market rebound. However, the country's aggregate debt ratio remains heading towards three times its GDP. In fact, as the regulators for banks, non-bank financial institutions and insurance companies – CBRC, CSRC and CIRC – join up with the PBOC to disentangle highly leveraged cross-investment activities between banks and non-bank institutions, hidden debts could continue to surface.

The focus during the last three quarters has been on financial deleveraging. Credit growth has moderated and banks’ exposures to shadow banking and off-balance sheet wealth management products (WMP) have been reduced. Leverage in the bond market has also dropped. The interbank NCD market, from which the smaller banks tap liquidity, has started to shrink in issuance volume. Macro prudential measures imposed on capital account activities such as banks’ cross-border inter-branch lending have also managed to rein in capital account outflows.

Preceding the financial deleveraging campaign by at least two years, the government was on a “real sector” deleveraging campaign to clamp down on excessive investments across industries from commodities, low-end manufacturing to real estate. Initially targeting local governments and zombie state-owned enterprises (SOEs), the government launched a municipal government bond market and a debt-equity conversion scheme to help in the deleveraging of these unproductive and unsustainable borrowings. Of late, the government is turning to the private sector, cracking down on large Chinese conglomerates’ global acquisition spree that has not only contributed to the country’s spiraling debts but also straining the capital account.

Between real sector and financial sector deleveraging, the latter clearly dealt a bigger blow to the financial markets. The protracted sell-off of the bond market from Q4 2016 into H1 of 2017 was so sharp that it prompted calls for the PBOC to relax its stance in Q2 which it finally did, though mildly, in mid-June. During this period, the CGB yield curve rose by over 120bp and the money market curve rose by over 150bp (see Figure 1). The flattening of the yield curve was deliberately engineered by the PBOC’s open market operations (OMO) to purge out leveraging of credit bond positions by banks, securities houses and speculative investors. The PBOC’s move to relax liquidity in June brought a mild relief to the market, but it is clear the central bank is not about to completely reverse its course. On the FX front, the CNY continued on its depreciation path that started earlier after the one-off devaluation in August 2015 (see Figure 2). Using the in-house Nikko model, the CNY is now broadly back at fair value, as gauged by the output gap and current account. 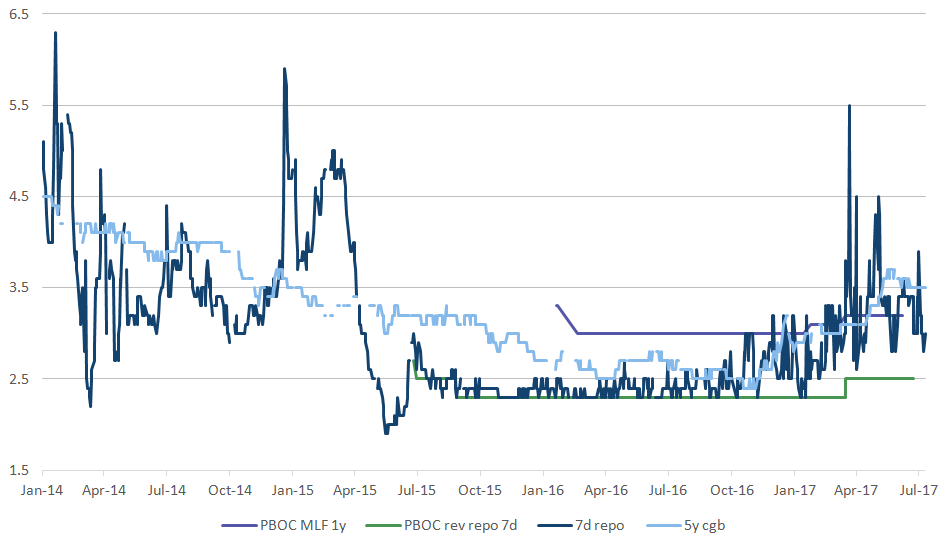 Figure 2: PBOC fixings for CNY vs basket and USD on the China FX Trade System (CFETS) 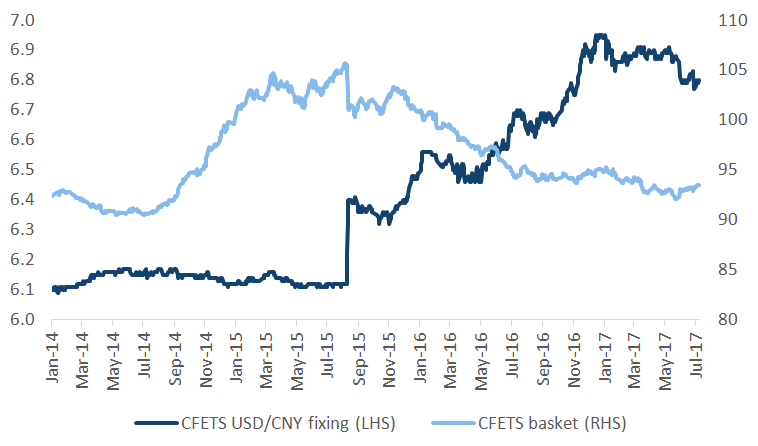 How much deleveraging to go? A lot more

In total, China’s deleveraging campaign, from the real sector to the financial sector, has actually been ongoing for more than three years. Results can be seen at the sector levels – bank loans, shadow banking and WMP growth have all cooled, while commodities and industrial production overcapacities have been reduced. At the country level, however, aggregate debt ratios continue to rise relative to its nominal GDP while the foreign reserves cover over broad money fell (see Figure 3). China’s corporate debt level is now well above the average levels of both the developed and emerging market groups (see Figure 4). At 24.6% of GDP, China’s credit gap (the difference between the private non-financial sector credit-to-GDP ratio and the long-term GDP trend) is deemed by the BIS as well above a 10% threshold that was breached by countries in two thirds of the past banking crises three years ahead of the crises (see Figure 5). 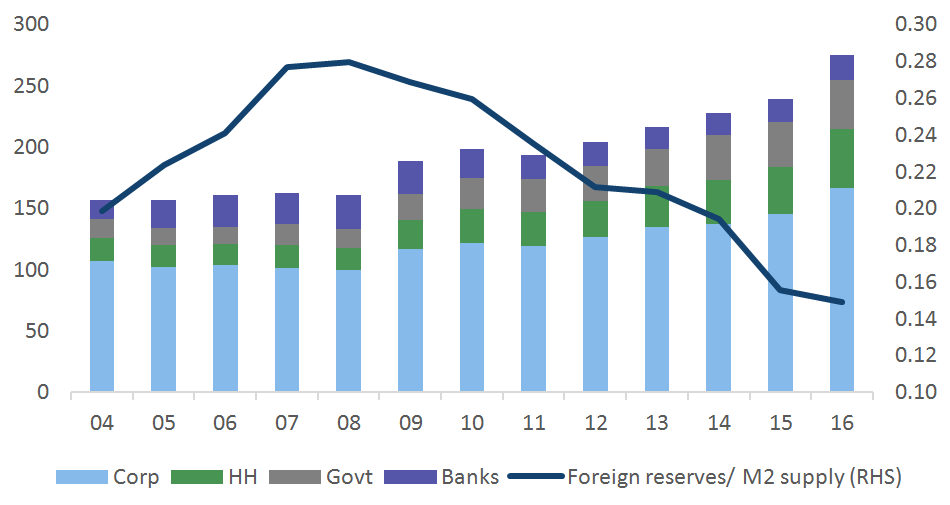 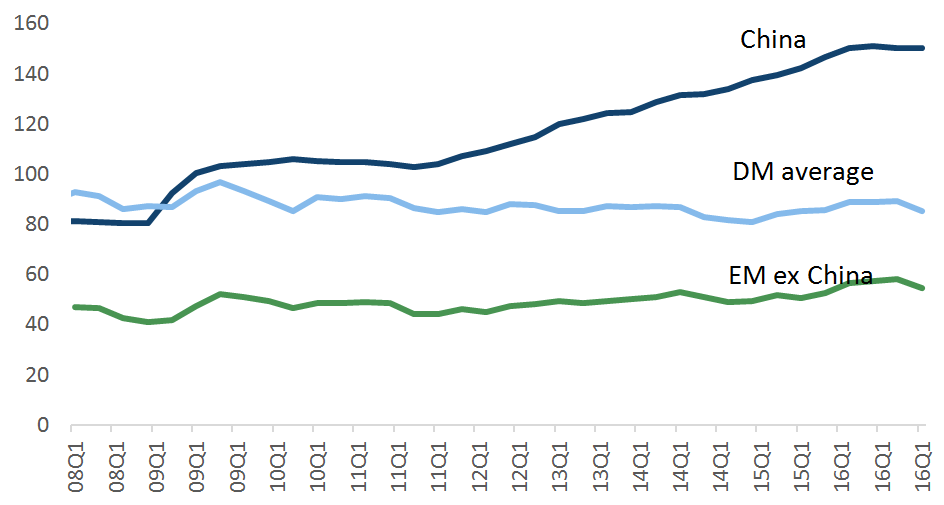 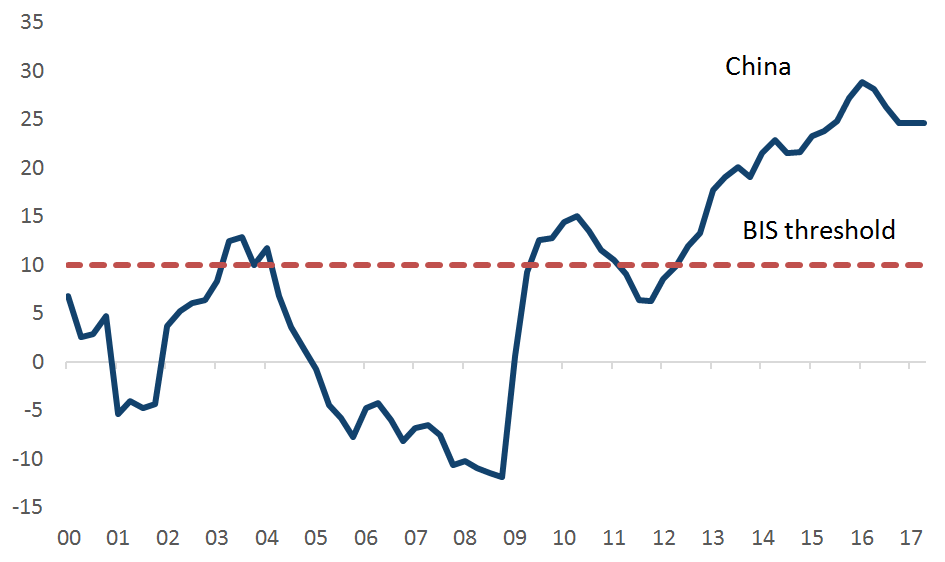 Given the extent of over-leveraging, deleveraging should be a long haul for China. A stop-go approach at managing monetary policy and guarding the capital borders had been slow in delivering results. We think a big game changer would be fresh foreign capital flows into the country that can replace the need of the PBOC injecting liquidity to balance the deleveraging risk without exposing the CNY to downward pressure. Such is perhaps the policymakers’ plan for the future as they launch a fourth channel for foreign investors to access the onshore bond market. (The first three channels are the Qualified Foreign Institutional Investor (QFII) scheme, the Renminbi RQFII scheme and direct China Interbank Bond Market (CIBM) scheme.)

With no investment quotas and offshore custodian arrangement, the Bond Connect virtually removes the final hurdle for China to be included into the global bond indices. As the world’s third largest bond market, the Chinese bond market could potentially see an inflow of at least USD200bn from the inclusions by the three main global bond providers – JP Morgan, Citibank and Bloomberg-Barclays (see Figure 6 and Figure 7). 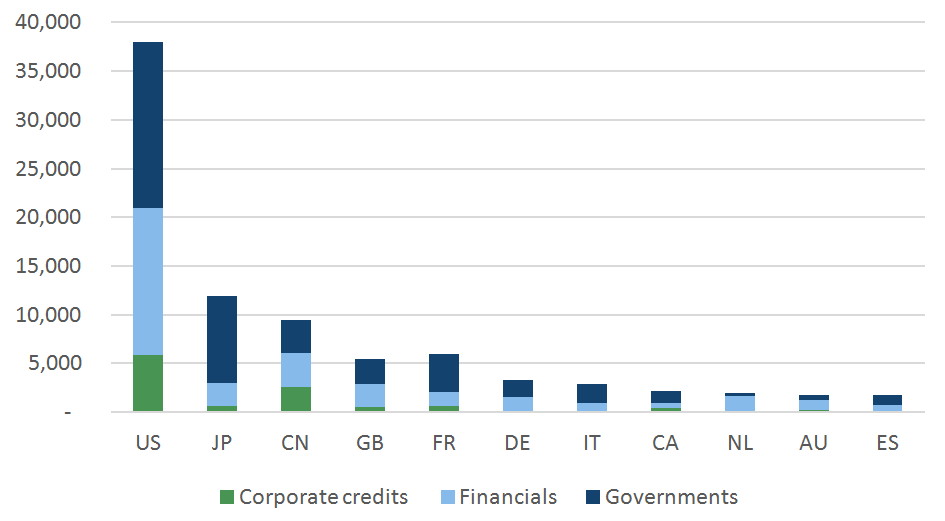 For now, the Bond Connect remains a one-way opening of the capital border, but the commitment as a member of IMF Special Drawing Rights (SDR) basket means that opening the Bond Connect for outbound investments should follow suit shortly. Adopting a fully open capital account is not a risk-free strategy. Once the capital border is fully open, it is no longer possible for China to control both interest rates and exchange rates. It is quite clear China is preparing for this as it has already began managing the short-end money market rates while gradually letting go its control over the CNY in the past two years.

The risk instead is the Chinese economy overheats again and closing up the capital account may no longer be an option if this happens. The debt situation could very well spiral out of control then, by which time, quantitative easing (QE) by the PBOC could become an inevitable policy choice. And QE is still an available choice as the PBOC has conscientiously reduced its balance sheet in the aftermath of the global financial crisis unlike the G3 central banks (see Figure 8). But we see QE as a very remote risk at this juncture given that both the bond and currency markets are at much fairer levels after the sharp correction in the last two years. 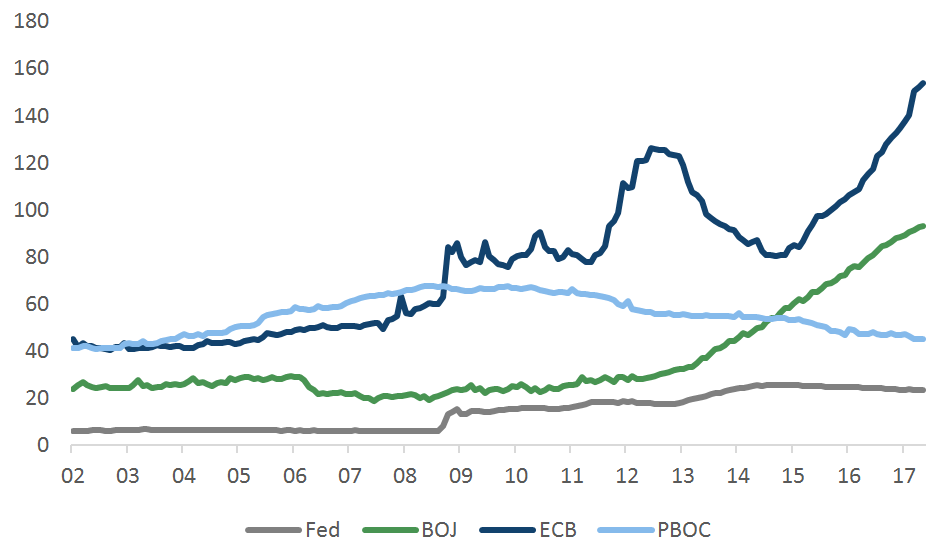 China decided to rebalance its economy from supply-side to demand-side growth in the aftermath of the global financial crisis. Implementation of such began three to four years ago with the deleveraging of the real sector to curb unproductive investments and cut excess capacities. The government turned to financial sector deleveraging in Q3 2016, targeting shadow banking, wealth management products and highly leveraged financial market trading activities.

Although financial leveraging has since moderated, the country’s debt ratios are not declining. With the softening of growth, the pressure is on the PBOC to relax its policy and with that, the concern about reigniting the asset bubble. The big game changer is getting China included into the global bond indices. This can bring about fresh capital inflows to balance the opposing pressures between deleveraging and growth. Given that the fixed income and currency markets have sharply corrected to fairer levels, we believe the risk of reflating the asset bubble is low. We are, thus, turning positive on both Chinese bonds and the CNY.