Our Tokyo Fixed Income team explains its view on the Japanese labor market and its effect on consumer inflation and Bank of Japan policy.
Share this

All other countries
Download as PDF
by Shigemasa Katayama, Head of Fixed Income, Japan
19 April, 2017

An announcement on March 31 revealed that Japan’s core CPI rose 0.2% year-on-year in February, and the figure is likely to be higher around 1% toward the end of this year. It should be noted, however, that the rise is mainly the result of gasoline price increases and public utility price revisions (for electricity and gas) driven by the higher cost of energy. These factors are not enough to push CPI to 2.0%. 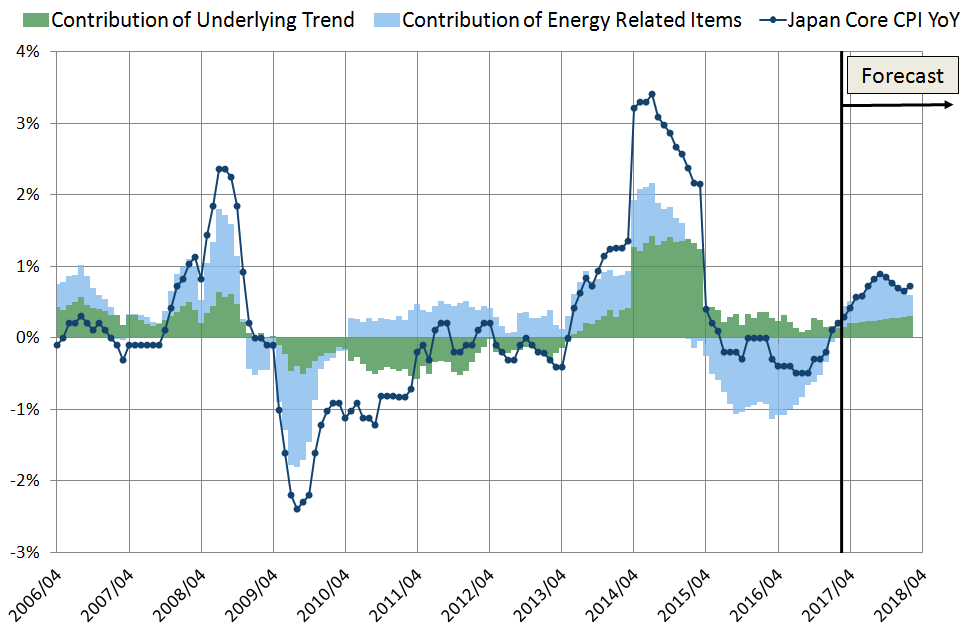 The Outlook Report released by the Bank of Japan (BOJ) on January 31 shows that its Monetary Policy Committee forecasts inflation to be 1.5% in FY 2017, while the market consensus figure is 0.85% (March ESP Forecast). The gap between the two outlooks remains very large, indeed.

Japan’s unemployment rate has fallen below the structural rate of 3.0%-3.5%, having dropped to 2.8% in February. With the ratio of job seekers to job openings approaching levels last seen in 1995, the labor market is clearly tightening. The BOJ’s Tankan released on April 3 also shows that firms believe the employment environment is tight.

Japan’s Monthly Labor Survey shows that the scheduled cash earnings of full-time workers are up 0.5% while part time worker’s hourly wages have been increasing nearly 2.0%. Overall wages have consistently undershot the above two figures due to downward pressure from the increasing proportion of part-time employees, whose wage is relatively low. The ratio of part-timers has probably reached its peak, with firms now reacting to the growing manpower shortage by prioritizing a stable labor force through regular employment contracts. The situation will also be welcomed by the government, as the improvement in the treatment of irregular workers helps to reduce economic disparities. The growth in wages could also lead to higher underlying inflation if it exceeds initial expectations. 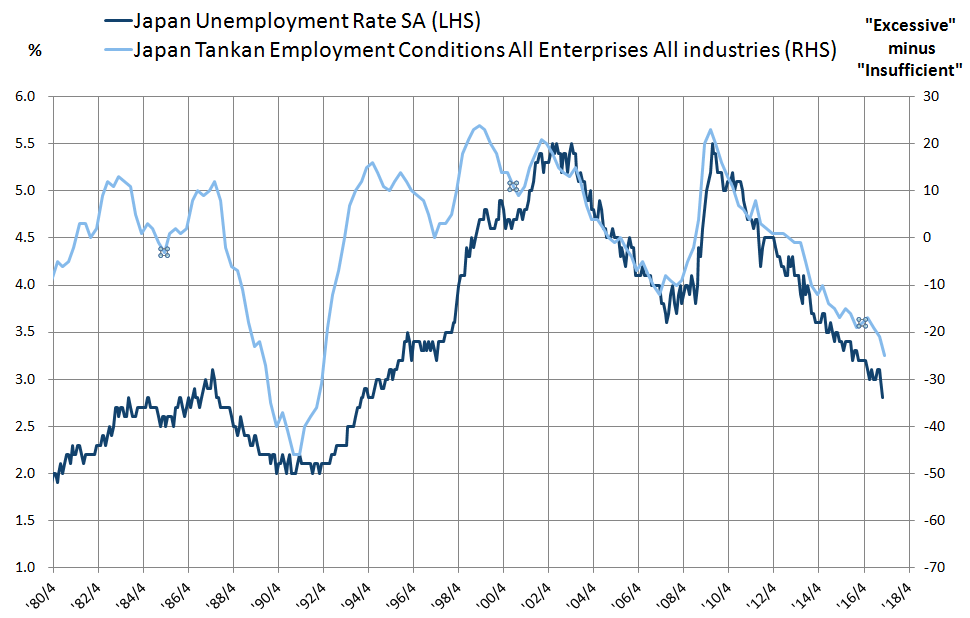 Source: Ministry of Internal Affairs and Communications, Bank of Japan 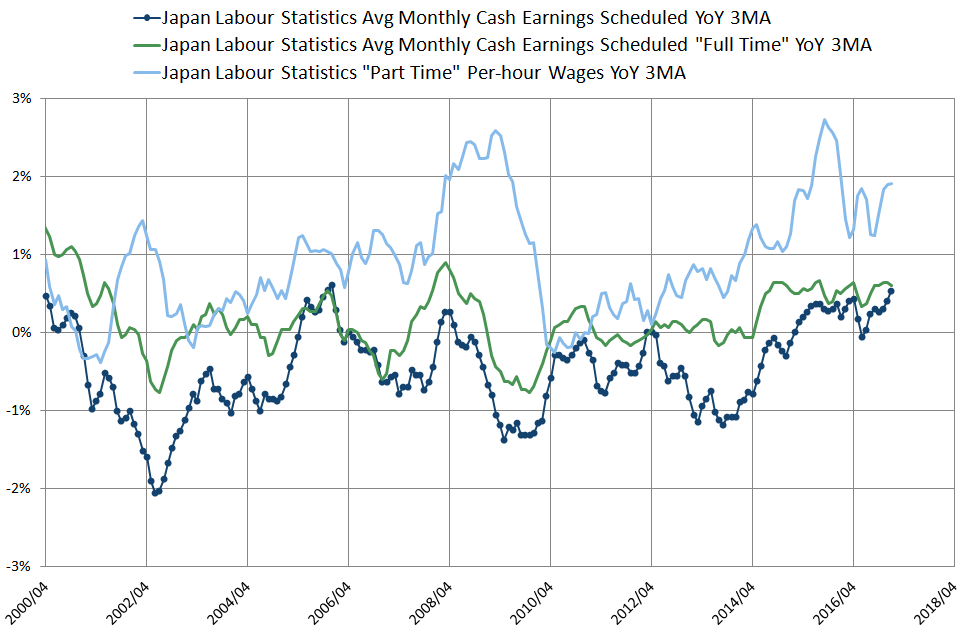 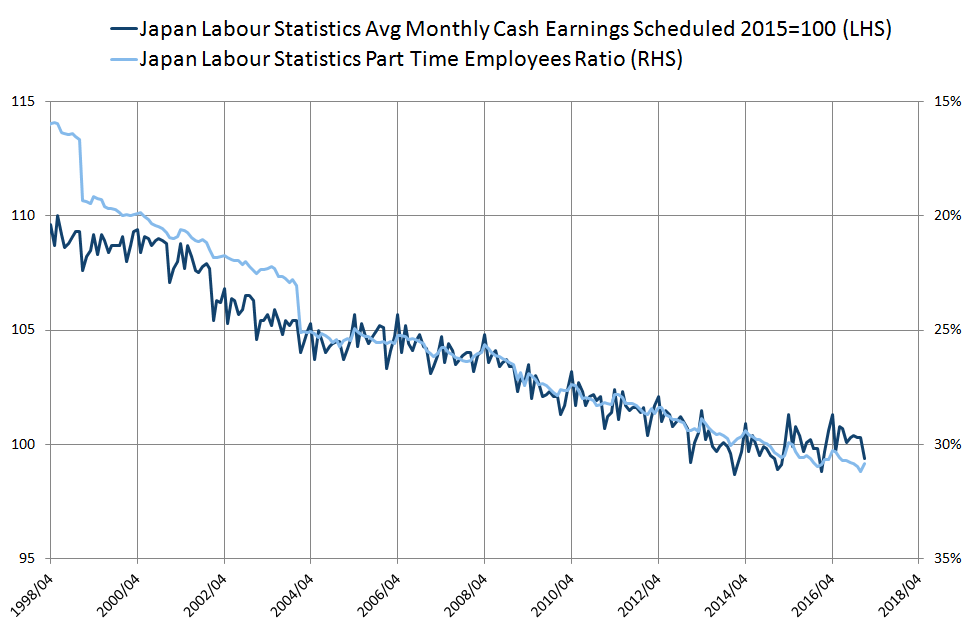 The BOJ is expected to continue implementing current monetary easing as long as CPI fails to hit 2.0%. Japan’s economy is mounting a moderate recovery, but it continues to be affected by overseas political developments such as the progress of the Trump administration’s tax reform proposals and the French presidential election. Even so, there are currently few reasons for Governor Kuroda to risk tapering monetary easing. Although a recent reduction in the pace of the BOJ’s government bond purchasing operations has led to expectations that it will revise its target of buying JPY 80 trillion a year, this is likely to have only a limited impact on the JGB market because of the passive reduction of purchases under the yield curve control policy.

With Governor Kuroda’s term of office set to expire in April 2018, the issue of his potential successor is likely to attract the media’s attention from the autumn of 2017. Since the 2% inflation target is a common goal shared by the government and the BOJ, this is unlikely to change whoever becomes governor, but the 10-year yield target is a different matter. To control 10-year yield under the scenario of rising inflation described above, the BOJ will need to increase its bond purchases by a large amount or without limit. In this case, the only way to ease the pressure will be to raise the yield target.

Many investors predict that the BOJ will start raising its 10-year yield target before the second half of 2018, and the rises to be increments of 20-30bps. Although Governor Kuroda is now dismissing speculation about raising the target, discussions about it are likely to intensify as inflation rises in the second half of 2017 in line with the strengthening economy. We expect these circumstances to put upward pressure on 10-year yield.

He started his career at Nikko Securities in April 1989 and joined Nikko AM in February 1997. He was promoted to team leader in the domestic fixed income investment management team in November 2002 and was appointed to head of fixed income in July 2005. He holds a B.A. in Law from Waseda University and is a CFA holder as well as a CMA.