As commodity prices have risen, the Australian economy is set to benefit from these continuing gains.
Share this

All other countries
Download as PDF
by Chris Rands, Portfolio Manager
11 April, 2017

As commodity prices have risen, the Australian economy is set to benefit from these continuing gains.

Over the next two quarters, this should provide positive economic outcomes, with the important question now being – can this last?

Tradeables inflation represents 40% of the Australian inflation basket, and has ranged from -0.9% to 0.8% since the beginning of 2015. Tradeables are goods that have prices determined on global markets, such as clothing and electronics. 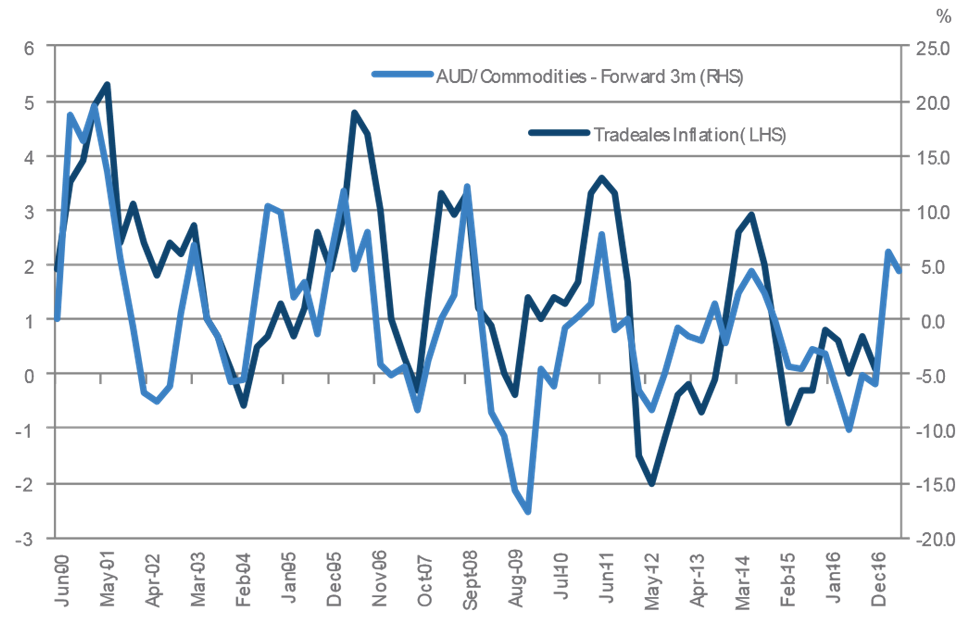 Australia’s improving terms of trade has led to a big increase in nominal GDP, which is now growing at 6.1% year-on-year. The terms of trade refers to the prices of exports relative to imports.

As commodity prices have moved higher in the first half of 2017, this will aid the strongest expansion in nominal GDP since early 2011. 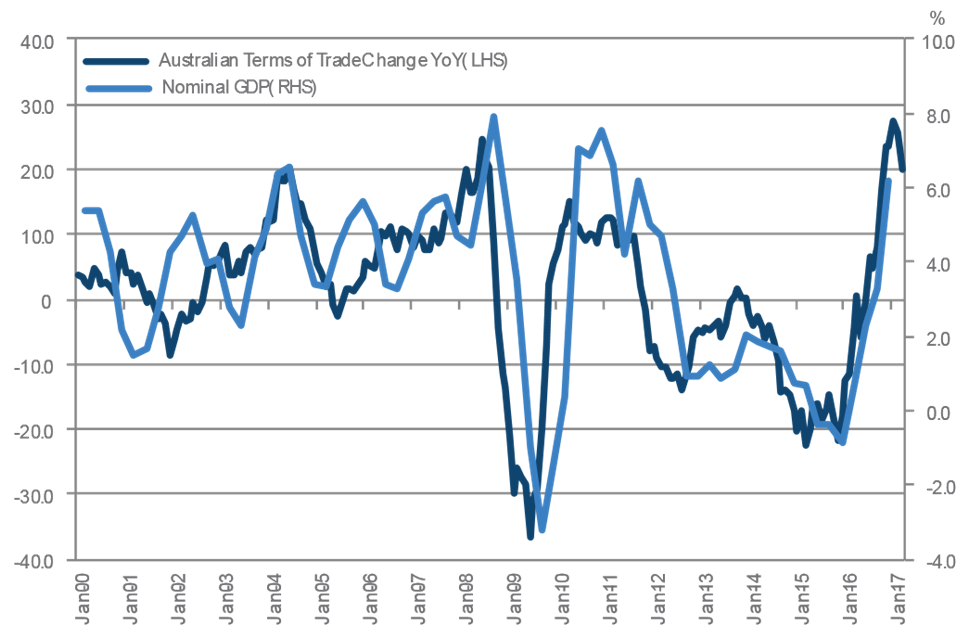 A change in what the RBA is thinking about

In a strong nominal GDP environment, the RBA is typically either hiking rates or keeping them on hold.

Over the past five years, the cash rate has been moving in only one direction, and this new information could see the RBA taking a more hawkish tone than what the market is expecting. 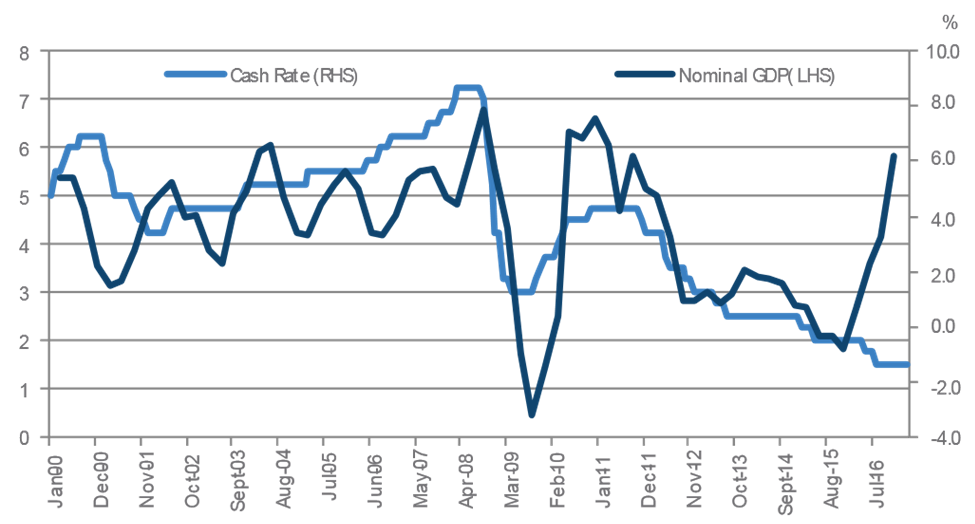 Has this all been driven by China?

Most of the improvement in Australia’s terms of trade looks to be due to demand from China, which consumes a large percentage of Australia’s commodity exports.

Over the past few months, the trade-weighted Yuan has stopped devaluing against its major trading partners, and this could slow the improvement in Australia’s terms of trade.

If the US Federal Reserve continues to tighten interest rates and the US dollar rises, then China may need to continue devaluing the CNY/USD, in order to avoid tighter financial conditions.

Chart 4: China is key to Australia’s terms of trade 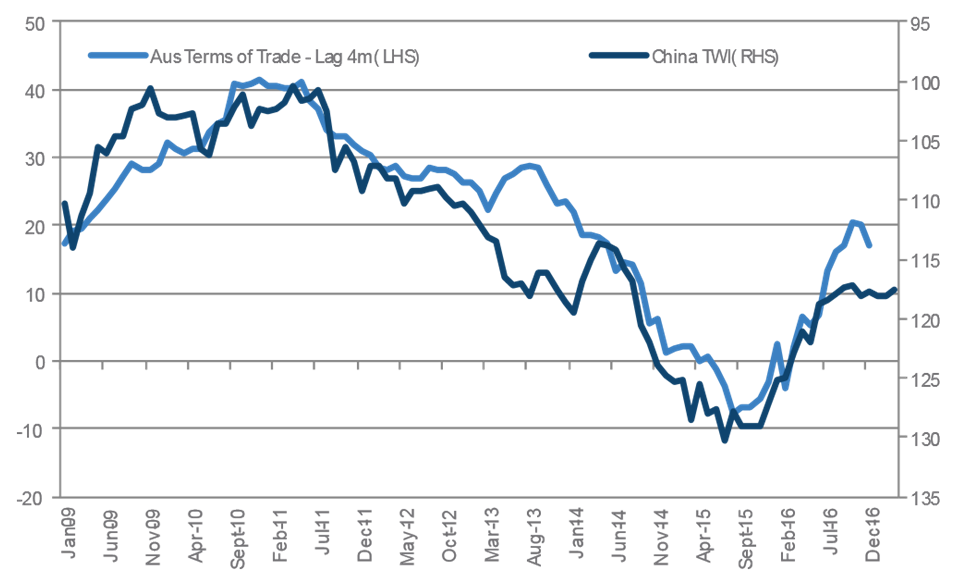 The recent rally in iron ore prices also coincides with an expansion of money in China’s economy, in particular M1, which is the most liquid part of China’s money supply.

The M1 growth has coincided with the devaluation of China’s currency, as noted above, and comes during a time of fiscal expansion that has provided support to Australian commodity prices.

As M1 growth slows, the gains in commodity prices could also begin to slow, potentially ending what has been a strong 12-month period for commodity markets. 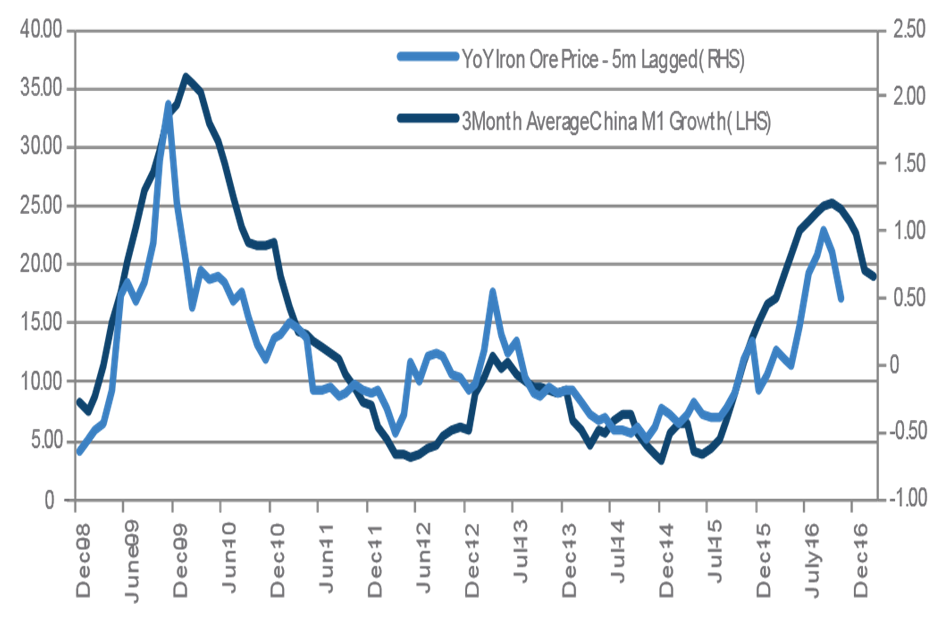 What this means for investors

The outlook for the Australian economy over the next two quarters should be strong and could potentially give rise to a more hawkish RBA than what the market expects.

The question for the quarters beyond will be whether the rally in commodities is sustainable.

If the commodity sector has been driven by Chinese fiscal expansion, this momentum could begin to run out during the second half of this year.