Move over OPEC, there is a new commodity cartel in town... China

All other countries
Download as PDF
by Chu Kit Kwa, Equity Analyst
21 March, 2017

Founded in 1960, OPEC has been coordinating and unifying petroleum policies amongst its members and influential in determining the oil price direction. Its last major action was last November when it announced a reduction of 1.2 million barrels a day by January 2017 and even pulled along another major non-OPEC oil producer, Russia, into the deal. But why this change in OPEC strategy when back in 2014 it abandoned adjusting oil production and pledged to “pump its competitors out of the ground”?

In considering OPEC’s move, I have considered if OPEC took a page from China’s playbook of 2016? For years, several of China’s primary industries have been plagued with oversupply. These oversupply issues were evident from the vast coal fields spread throughout China through to the steel and aluminum industries in eastern China to the aging oilfields of Petrochina and Sinopec, which in turn has led to poorer profitability. In the past, excuses like social security and national interests have always existed for not rationalizing these sectors but in 2016, China went out and did something different. China’s action in 2016 had a profound impact on commodity pricing and the rules by which the commodity industry participants play by.

A page from the Chinese commodity playbook

During 2016, China took various actions, more directly in coal but more subtly in the oil and gas sectors, which had a significant impact on production. 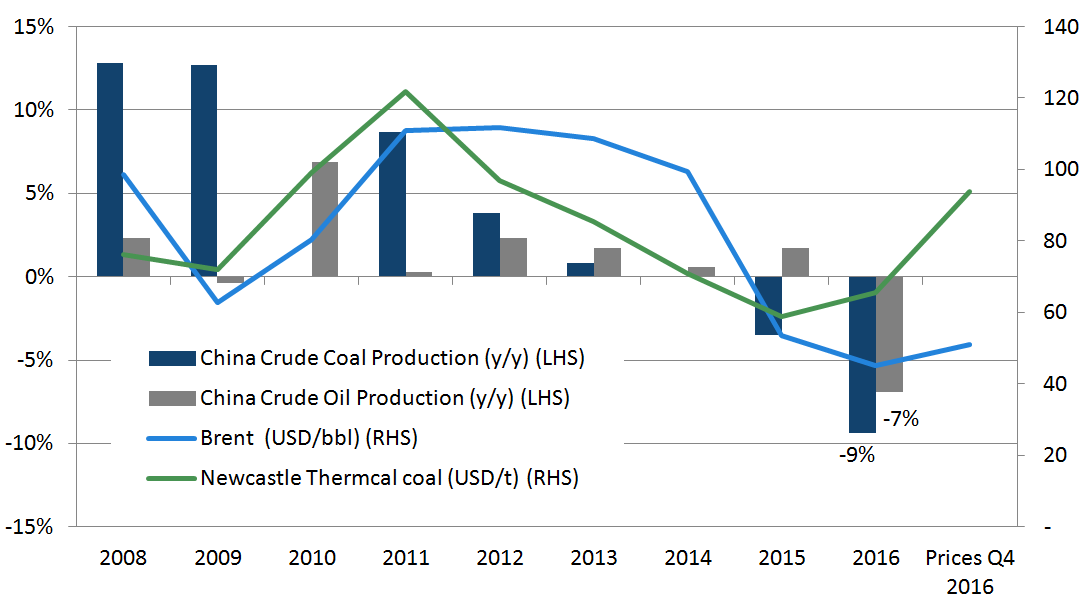 What happened in Chinese coal?

For the last five years, coal mining profitability in China (and globally) has been on the downtrend. Combined with diminishing demand from alternative sources of power and increasing coal supply, the outlook for the Chinese coal miners seemed increasingly uncertain.

In mid-April last year, a subtle directive was issued, in which working days for all coal mines was reduced to 276 days a year from 330 days. The price impact was not immediate; from April to June 2016, thermal coal prices were relatively muted, but afterwards, port inventories and stockpiles at the power producers needed replenishing and coal prices reacted. By November, when the 276 day rule had been fully executed, coal production was down 12% year on year and coal prices had almost doubled. The Chinese government had a new problem that it had not faced in four years, what do to do about high domestic coal prices? 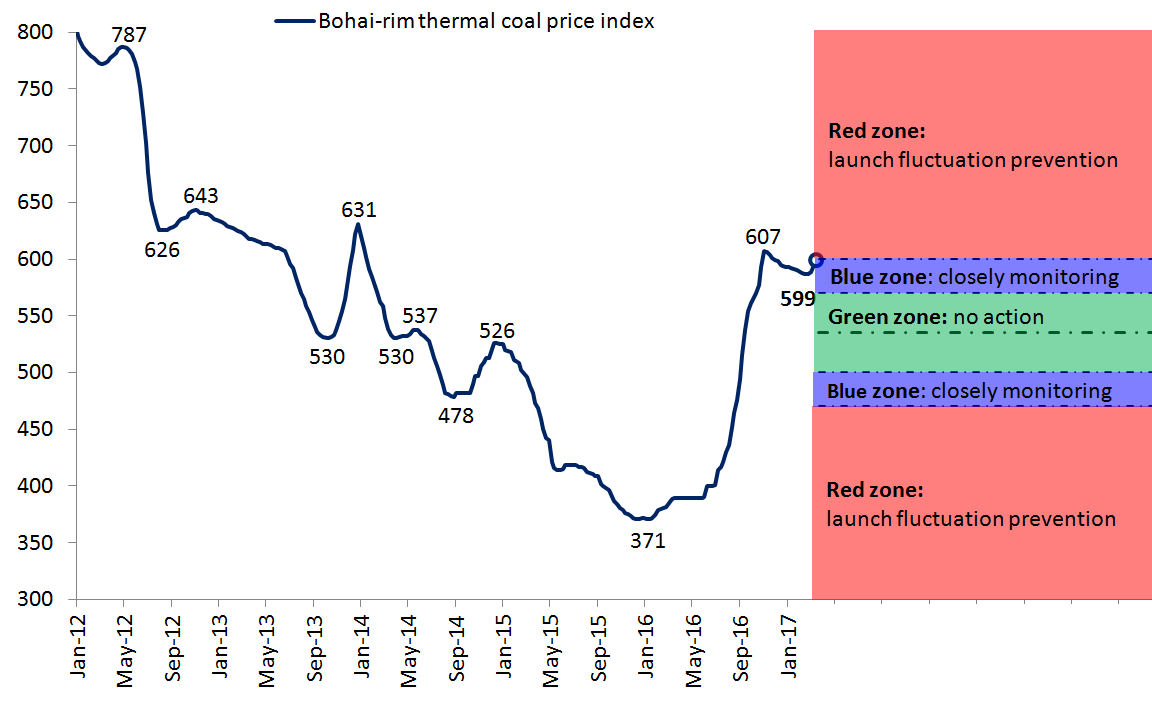 With these actions, the NDRC solved two problems, the low profitability of its coal mines was eliminated overnight and the use of coal would be reduced, thus helping it hit its power mix requirements.

So from here on into the foreseeable future, coal pricing will be dictated and controlled by the NDRC.

What about Chinese oil production, what happened there?

Which oil producing block cut oil production the most in Q4 2016. Answer – China.

China is a relatively small producer of oil, at 4% of global supply in 2016. However, its production decline of 0.5 million barrels per a day from Q4 2015 to Q4 2016 is sizeable compared to OPEC’s proposed production cuts 1.2 m barrels a day. Whilst most journalists have written about OPEC’s proposed cuts, China’s production cuts have not been given much press coverage. What happened here? China crude self-sufficiency has taken a backseat. Rather than focusing on production growth, Chinese SOEs were encouraged to improve efficiency and profitability. Hence, this has encouraged the closure of high cost, uneconomic wells - even at the expense of production volume. 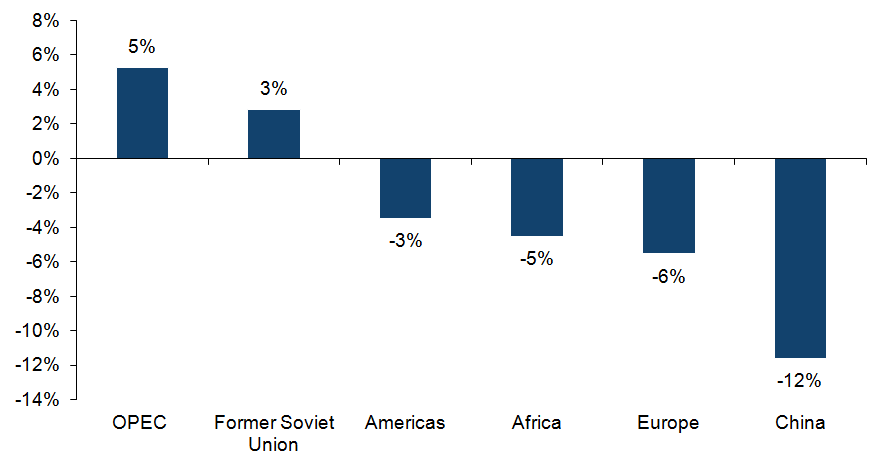 What cartel is next? – Steel and Aluminium

The results of the China’s action in coal and oil are still in the early days and their determination and ability to control the coal market is yet to be fully tested.

What commodities sectors could be next for the China? Commodities that stand out next are steel and aluminium. China has laid the ground work for steel with its 13th five year plan for the steel industry. With capacity reduction targets, frameworks for new capacity additions to only replace obsolete capacity and increasing the state owned enterprise share of production to 60% (from the current levels of 35%), the steel capacity and production from China looks likely to be restricted.

Aluminium could be a story for later this year. The Ministry of Environmental Protection released a draft air pollution prevention plan which requires aluminum smelters in Hebei, Shandong, Henan and Shanxi to suspend aluminum smelters and alumina refineries to suspend production from the end of 2017.

China’s policies in the last year have had a series of “unintended” winners. The most obvious winners from China’s coal policies were the seaborne coal exporters. Whilst China has restricted its domestic coal production, Chinese imports of coals increased 25 percent year on year leading to a significant increase in profits for Australian and Indonesian exporters of coal. However, it has become pretty clear that the fate of these unintended winners is clearly in the NDRC’s hands.

Chu Kit Kwa is a member of the Asian equity team at Nikko AM Asia based in Singapore. Chu currently researches energy and materials stocks in the Asia Pacific region.

Chu graduated with a Bachelor of Commerce from the University of Western Australia and is a Chartered Accountant.