Asia’s Credit market has come a long way since the Asian Financial Crisis of 1998, having evolved into a large, deep and liquid market.
Share this

Asia’s Credit market has come a long way since the Asian Financial Crisis of 1998. The total market has grown to approximately $693b ($549b is High Grade, $144 High Yield) and its stability is also remarkable; indeed, there has never been a default in the Asia High Grade bond market.

To understand how the Asia High Grade Credit market has evolved, it is necessary to look beyond issuance by pure country-only analysis, and look at how supply by sectors within countries has developed. This reveals a growing diversity.

The evolution of the offshore market also reflects the dynamic between Asia’s fundamental economic growth, sector funding needs and the relative abilities of offshore and onshore markets to meet those funding needs.

Looking at the trends that are driving growth in issuance, China is likely to remain a large part of Asia High Grade Credit (currently around 44%), as it dominates Asia’s economic growth (currently around 60% of Asia-ex Japan GDP). However, the diversity of supply within China, and the rise of Indonesia sovereign and quasi-sovereign credits to high-grade is shaping the evolution of Asia’s Credit markets.

The headline story of Asian Credit, in particularly High Grade Credit, is one of rapid growth – with a 17% CAGR between 2006 – 2016. The technical factors driving this growth have been regional demand with the rise of the “local bid” and the need to fund growth. We have looked at the local bid in earlier material, and will focus here on the evolution of the High Grade Credit supply. 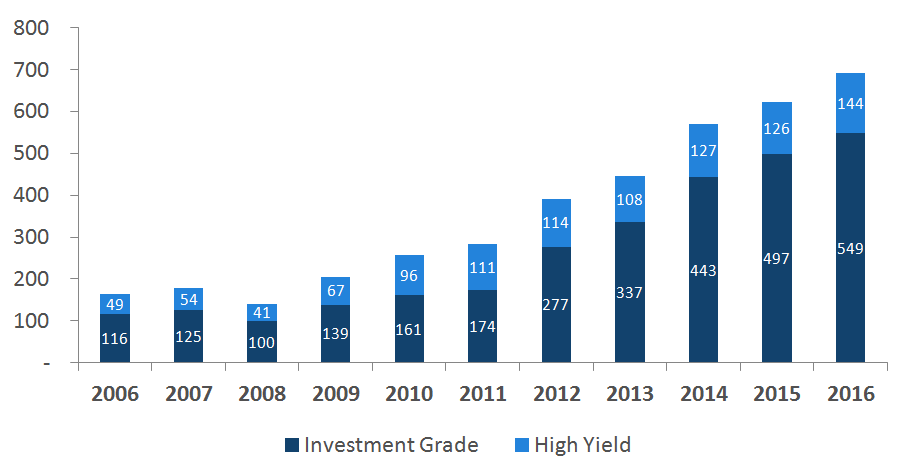 Table 1 below gives a quick snapshot of how fast and how far Asian High Grade offshore credit markets have developed in the past. What it shows is how the market has grown in depth, breadth and diversity.

If we compare issuance by country in 2006 to 2016, the first thing that stands out is the rise of China as a key source of new issuance. In 2006, Asian Credit was dominated by South Korea (34%) and only seven countries had access to Offshore High Grade Credit markets (see Chart 2 below).

However, by 2016 South Korea’s share had shrunk to 12.7% and twelve countries now access the markets, also reflecting the growth in new markets (such as India and Indonesia) as well as improving ratings of sovereigns in Asia in recent years, with issuers such as the Philippines and Indonesia being upgraded to Investment Grade.

If we compare issuance by sector in 2006 to 2016, another story emerges. Asian Offshore Credit markets in 2006 were dominated by Financials, Quasi-Sovereigns and Sovereigns. However, in 2016, the pie chart is split in more ways as sectors have diversified. While the aforementioned sectors remain the largest (though country composition has changed); Oil & Gas, Infrastructure and Real Estate have also been expanding their share. 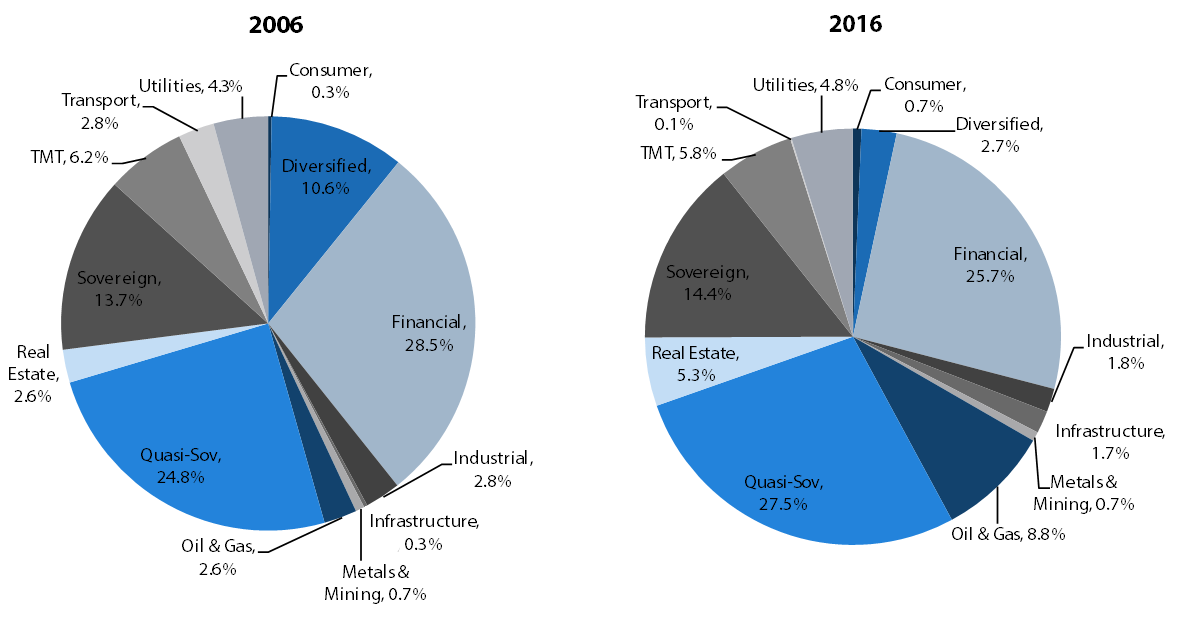 Other factors that have shaped the evolution of the market have been the relative accessibility of onshore vs offshore capital to issuers. For example, part of the reason for Korea’s declining share of overseas high grade issuance, has been the preference for Korean issuers to access local currency bond markets and avoid paying an “Asia premium”. Similarly, since the Asian financial crisis Malaysian issuance has been largely funded by domestic investors via its local bond market, so that its share of offshore High Grade has substantially declined.

*Only includes sectors with country-sector weights of more than 1%.
Source: JP Morgan as of 31 December 2016

How is the Asian High Grade Credit Market Likely to Evolve?

Given the sheer size of China’s economy and its increasing integration with global financial markets, it seems highly likely that Chinese Financials will continue to dominate offshore issuance in the Asian High Grade Credit market, although as China’s growth moderates, we would also expect that longer term dominance to moderate as well, in particular, as issuers in other domiciles and sectors increase their offshore funding.

Another trend that will be interesting to observe over the longer term is the extent to which Asian companies start to disintermediate local banks and access offshore markets directly themselves. If this trend, which has occurred in other markets as corporates become more sophisticated, also takes place in Asia, then we would expect to see sector issuance continue to diversify especially in more developed Asian markets.

On the demand side, the continued increase in intra-regional institutional flows, as local pensions, insurance and banks look for stable investment opportunities within their region, is also likely to drive the development of High Grade Credit in offshore markets to meet this need.

However, in contrast to this, we must not forget the growth of local currency markets, which have risen from a little over $2 trillion in 2006 to almost $12 trillion in 2016. The attractiveness of local currency capital as a substitute to offshore High Grade local issuers may also absorb some of the growth and slow the supply of Asia Credit, especially if intra-regional investors become more comfortable with non-hard currency risks.

Source: AsianBondsOnline (Asian Development Bank) except for India (Bank for International Settlements, Securities and Exchange Board of India) and Taiwan (Central Bank of China), as of September 2016.

We expect, with the strengthening of the USD and the likelihood the Fed will continue to gradually increase rates, that local demand for USD denominated Asian credit will remain strong. These technicals should support the ongoing growth in supply in Asia High Grade offshore credit. In particular, as the RMB declines against the USD, there is likely to be strong growth in Onshore Chinese demand for USD denominated China assets, which has been a key contributor to the local ‘Asia bid’.

JP Morgan forecasts that new gross issuance in 2017 should set a new record of around USD $201 billion. However, as most of these are for refinancing, the net supply is likely to come in lower than the average of the past two years. Just over half is from China ($101b), while Korea is expected to come in a distant second ($25b). Within this, High Grade should continue to dominate High Yield (75% to 25% ). 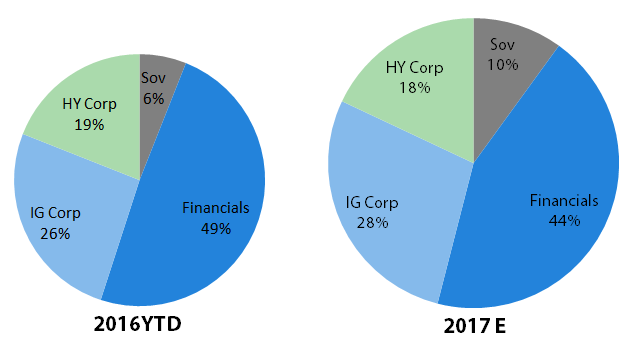 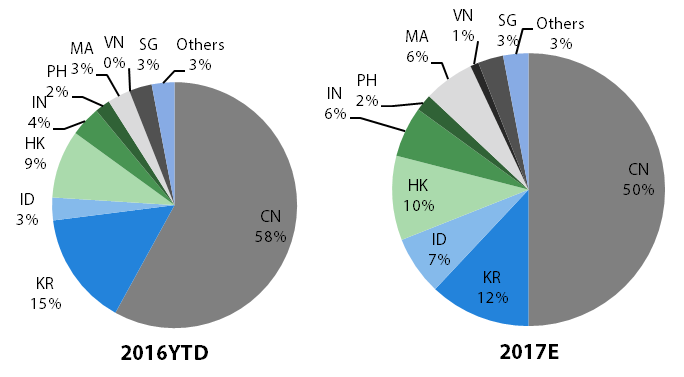 For investors wary of high country exposures, use of customized or diversified indices is rising. The JP Morgan Asia Credit Index Diversified (JACI Diversified) helps reduce concentration risk within the benchmark. Below is the country exposure of this diversified index, with China’s country weight reduced to 21%, while other countries get higher weights, with the greatest increases in the Philippines, Singapore and India. 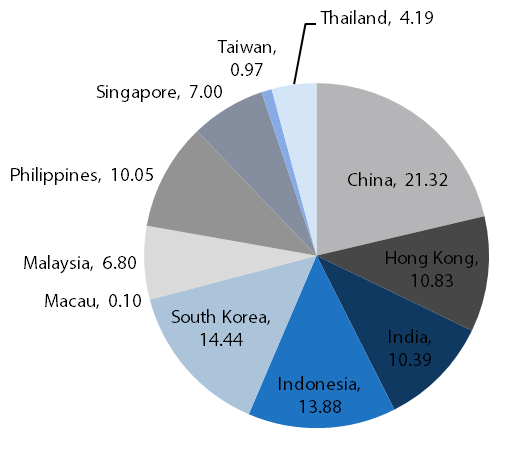 An active manager can also tailor country and sector allocations within a portfolio to generate the risk/return exposures that meet a client’s investment objectives. The Asia Credit markets are now deep enough, and broad enough, to allow significant opportunity for an active manager to generate additional value in this way, as well as by inclusion of off-benchmark securities.

Jian Wei currently manages institutional Asian Fixed Income portfolios and is mainly responsible for shaping portfolio strategies across the firm’s Asian Investment Grade Credit mandates. He also has experience managing various strategies ranging from fully active benchmarked funds to passive mandates. Jian Wei joined Nikko AM Asia in August 2011. Prior to this, he was with Prudent Asia Capital Management and UOB Asset Management where he specialised in bank capital and global credits. He has 17 years of experience in the financial industry, combining 10 years of credit-related experience in the asset management industry, and 7 years as an economist with Bank Negara Malaysia in the Monetary Assessment and Strategy Department. Jian Wei holds a Bachelor of Arts (Economics) from Cambridge University, United Kingdom, and is a CFA® charterholder.