Why Asia Credit should stand alone from Global Emerging Market Debt.
Share this

We believe that Asia Credit should be treated as a separate allocation, rather than part of an Emerging Market allocation, for the following reasons:

Why Asia Credit? – Five Reasons for a Separate Allocation

One of the benefits of treating Asia Credit as a separate allocation is that it can more fully capture the diversification benefits of incorporating it into a broader portfolio. Indeed, diversification is the only “free lunch” available to investors and should be utilized to its maximum potential, in our view.

The growth of the Asia Credit market has been remarkable, reflecting both the funding needs of regional growth (which accounts for almost 80% of global GDP growth) and the demand by local institutions for local debt instruments. Just as remarkable has been the risk adjusted returns: from Jan 2009 to Sep 2016, the annual volatility for hard-currency Asian Investment Grade (IG) credits has been approximately 4%, while returns have been almost double that – yielding a Sharpe ratio of nearly 1.9x. This is far lower volatility than comparable Emerging Market debt, and even US IG debt. Key contributors to this fact have been the sustained fundamental growth and substantially lower debt servicing ratios for many Asian corporate issuers, coupled with the diversification of income streams. Strong buying support from long-term Asian investors has also supported the lower volatility figure.

As the chart above shows, the Sharpe ratio for Asia IG hard currency credit has outperformed similar credits in other regions on risk/return basis from Jan 2009 to Sep 2016.

Yet for many institutional investors in developed markets, Asia Credit remains an exotic asset class, on a par with Emerging Market debt. The image many have about Asia Credit goes back to the Asian Financial Crisis of shallow markets with low liquidity, high volatility and domination by foreign flows.

As the following chart shows, the quarterly returns for the JACI Asia Credit Index vs. Barclays Aggregate is highly dispersed. The average correlation over the past 10 years (January 2006 – December 2016) is only around 51%.

2. Asian economic growth and the Evolution to Multi-polar world

While there have been major political surprises this year, including Brexit and Trump’s victory, we do not see the opposition to “globalism” reversing the fundamental trends that are driving Asia’s economic growth and influence in global politics. Rather, these political events reflect a reaction to these and other internal trends:

This evolution is reflected in the RMB being accepted as a reserve currency by the IMF, and growth in regional initiatives, such as the One-Belt-One-Road program. Even if broader free trade agreements, such as Trans Pacific Partnership, are derailed by political opposition, intra-regional agreements will continue to develop in support of greater cross-border flows.

Asia Credit offshore market development also reflects this intra-regional growth. As can be seen since 2009, the share of flows into the market coming from Asia has grown from 49% to 71%. This is due to the creation of wealth in Asia and the development of more robust pension, insurance and banking systems that are driving the “local bid” demand for Asia fixed income assets.

At the same time, new issuance has also become more diverse as it has grown. China has replaced Korea as the largest country-market segment, but India and Indonesian issuances are also increasing in order to meet their funding needs. As Asian corporations become more sophisticated and able to access direct funding through offshore markets, we expect this growth to be self-reinforcing.

The rise of the Local Bid: % flows to Asia IG by region 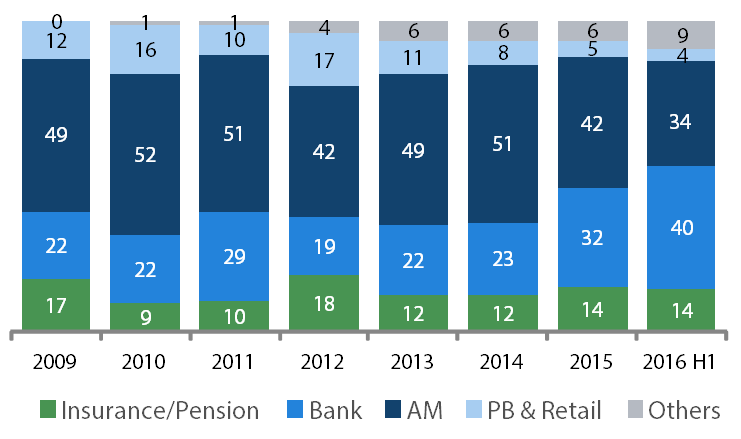 A traditional CAPM approach uses benchmark indices as the proxy for listed securities. However, in markets such as Asia, where growth across the region is uneven and at very different stages, an over-reliance on benchmarks can give a skewed view of opportunities. Even on market cap weighted equity benchmark, tracking the index tends to reinforce a size bias to investing. Furthermore, liquidity limits, capital flow rules and other constraints mean that benchmarks can skew an investment approach away from fundamental growth and toward primarily the largest established firms. In the case of fixed income, the impact of benchmark biases is even more significant. By matching a benchmark in which the largest debt issuers are allocated the largest investment, the index essentially favors indebtedness over other factors, such as growth.

From a contribution to global GDP growth perspective, Asia ex Japan clearly dominates. However, by investing in Global Aggregate or Global Credit strategies, global investors allocate less than 5% to the region, a large underweight compared to the region’s growth contribution. Thus, a separate allocation to Asia Credit is required for investors to better reflect the real economic significance of the region. In regards to investment in Asia Credit, Nikko AM also advocates an active approach, rather than following regional fixed income benchmarks. This allows investors to limit exposure to issuers, such as China property firms, which may be large, but around which we have quality concerns. 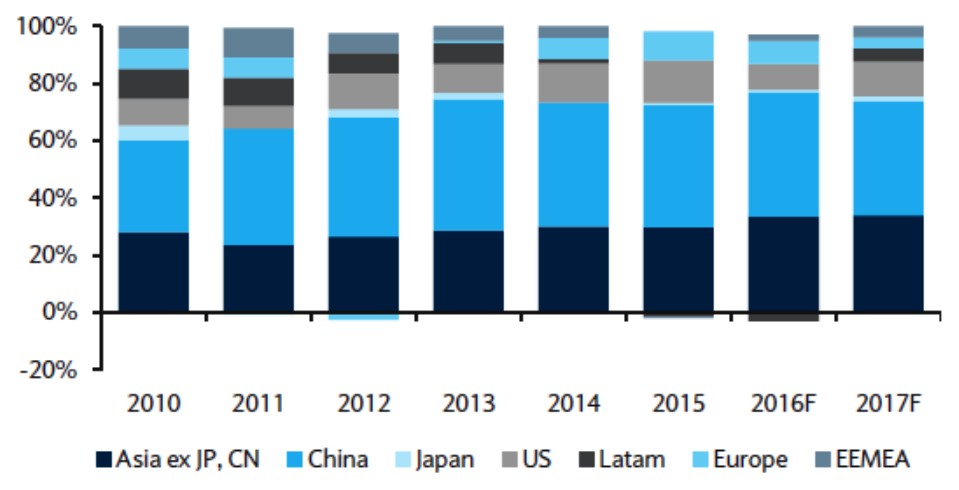 4. What is an Emerging Market? Does it apply to Asia Credit?

If you compare the risk and return profile of Asian Credit to that of Latin America or other regions, there is very low correlation. Also, within Asia, there are very clear differences in the stages of development between markets such as Vietnam and Korea. Investors need to decide how granular they wish to be in assessing market differences; however, investing in Asia as part of an Emerging Market allocation ignores the significant differences between key markets there and in other regions.

As noted earlier, increasing wealth accumulation in Asia, and the growing sophistication of local financial institutions in channeling that wealth, have been key drivers of liquidity in Asia Credit markets and part of the reason that volatility has been lower than EM debt markets. Furthermore, the strong fundamental growth in the region has meant that default rates have been lower (and recovery rates have been far higher) for Asia than EM. Indeed, according to JP Morgan*, for 2016 YTD on High Yield markets, Asia default rates are 0.9%, compared to 3.5% for the EM average, and 2.4% for the US, which is consistent with historic trends. 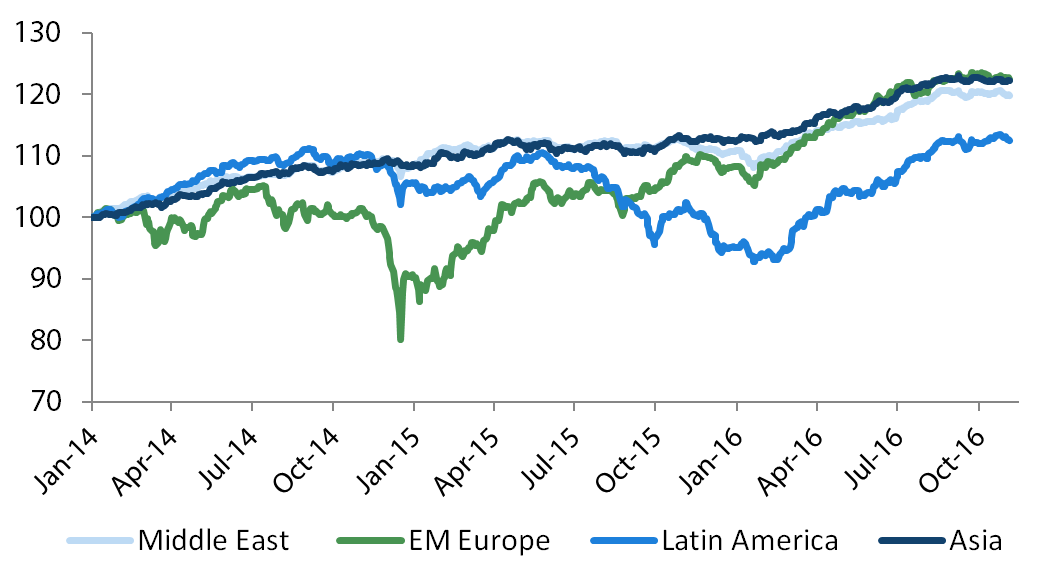 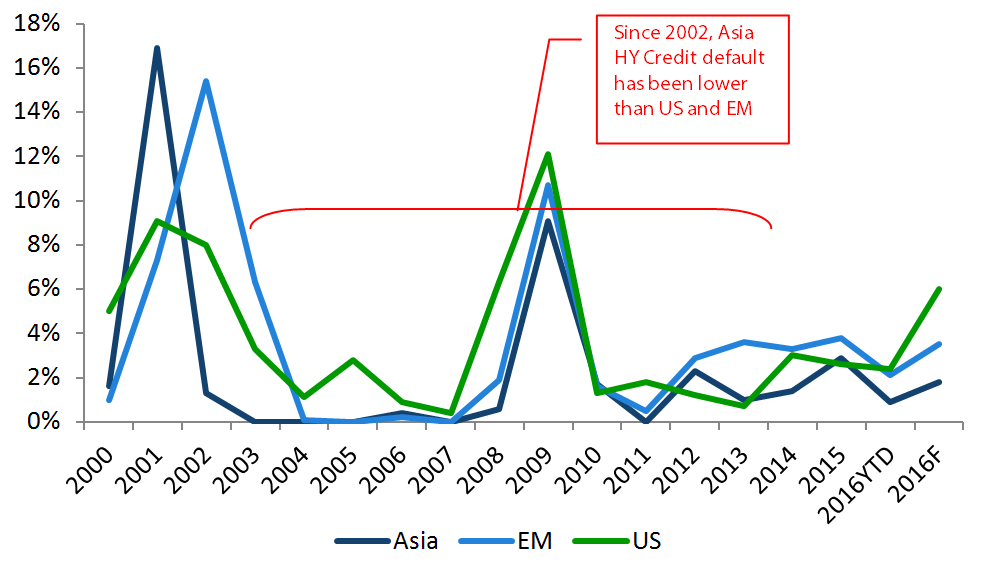 In sum, we believe that treating all EM debt as a homogenous asset ignores significant differences (and therefore alpha opportunities) and that a more nuanced approach can capture these returns with lower risks.

5. Including an Asian Asset Class is accretive to a Global / EM portfolio

By taking a more focused approach to Asia through a stand-alone allocation, investors can leverage specialized expertise in an asset class that can enhance the overall risk / return profile of a Global or EM portfolio. As the chart below shows, a blended portfolio with a 20% JP Morgan Asia Credit Index separate allocation and an 80% Barclays Global Aggregate Index allocation would have consistently outperformed a 100% allocation to the latter over the past five years by approximately 2.4% in USD terms.

At the same time, as the scatter chart at the top of this article shows, because Asian Credit is a relatively small component of the Barclays Global Aggregate Index, with only around a 50% correlation, apart from yield pick-up by overweighting to Asia Credit, there are also significant risk diversification benefits from a separate allocation to the asset class. This is particularly true of Asia Credit Investment Grade with its high Sharpe ratio. 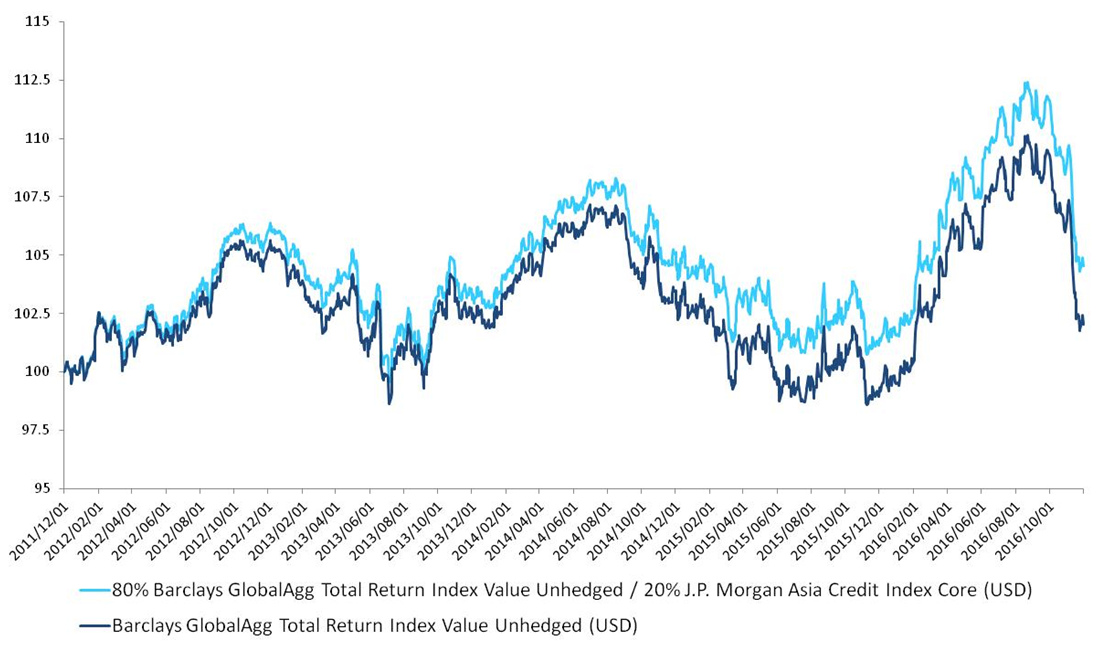