We believe that in an increasingly uncertain world, Japan’s less uncertain market will provide a compelling opportunity for serious investors.
Share this

Watching the Japanese equity market on 8 November 2016, we had a sense of déjà vu from the Brexit vote that shocked the world in June. But as the poll results for the US Senate and House of Representatives became clearer, we were encouraged by the emergence of a new Republican president who will benefit from full Republican control of Congress.

Other than the US itself, we believe that the country which will benefit most from the policies to be implemented by the incoming Trump Administration would be Japan. The three pillars of Trump’s policies are: tax reform, deregulation and infrastructure spending. We think that these measures are highly likely to be implemented—in particular the tax reform—given that there will be an absence of political gridlock in Washington.

These policies are expected to boost US GDP growth over the next few years, and, given Japan’s dependence on the US, which is the largest economic partner for Japan (20% of total exports, valued at JPY 15 trillion in 2015, and outbound direct investment into the US totaling USD 419 billion as of end 2015), it stands to benefit a great deal from the policies’ implementation.

Changing policy mix in US to drive yen lower

Looking at US monetary policy, the Federal Reserve has been in a rate hike cycle since December 2015, implying that the US economy is recovering steadily. The job market is also tightening, as evidenced by the unemployment rate dropping to 4.6% in November 2016 – its lowest level since 2007 (before the Global Financial Crisis).

Fiscal stimulus under the leadership of the incoming US president in the current environment is likely to cause interest rates to rise, resulting in the US dollar strengthening against all other major currencies. If investors make decisions based on fundamentals (i.e. if the currency market is driven by interest rate differentials), we think that the currency likely to see its value drop the most is the Japanese yen.

This is because the differential between US and Japan interest rates will widen as the US rate rises and that of Japan remains anchored at a low level due to the Bank of Japan (BOJ)’s new policy framework. Under the framework, introduced in September 2016, the central bank commits itself to keeping the 10-year JGB yield around 0% through its “yield curve control” policy.

As an excessively strong US dollar may dampen US exporter earnings, “one-sided” strength in the greenback could trigger a political intervention. Having said that, the US already has a large trade deficit, and a stronger US dollar will result in lower import prices, boosting disposable income. This will likely have a positive impact on US GDP growth.

Looking at the corporate earnings trend for Japan, revenues and profits fell year-on-year in the first half of the fiscal year (April through September 2016) for the first time in five years due to the yen’s strengthening from USD/JPY=112.57 to USD/JPY=101.35.

However, despite the stronger yen, net profit margin is on the rise and is poised to surpass market expectations by reaching an all-time high this fiscal year (ending March 2017) thanks to companies’ aggressive cost-cutting efforts. As major companies are still assuming a USD/JPY of around 100-105, if the yen remains weaker than what these firms expect (with the USD/JPY above 110), we expect EPS growth to accelerate, driving the equity market higher. We believe this is especially likely given that recent currency movements have been very rapid and have yet to be priced in by the equity market.

Valuation-wise, the price-to-earnings (P/E) multiple for the broad market TOPIX is attractive. In fact, multiples had been driven down by foreign investors through the end of September 2016 (see Chart 3), as a strengthening of the yen triggered skepticism of the government’s “Abenomics” economic policies. Foreign investors have sold a net JPY 6 trillion worth of Japanese equities year to date through the end of September, the largest amount of foreign investor selling since the Tokyo Stock Exchange started collecting such data in 1982. However, with yields bottoming out globally and the yen now weakening against the US dollar, foreign investors have come back to buy a net JPY 2 trillion in October and November alone. The supply/demand conditions in the market are clearly improving. The BOJ’s program for purchasing ETFs was expanded to JPY 6 trillion per year last July and we are also expecting about JPY 6 trillion in corporate buybacks this fiscal year. 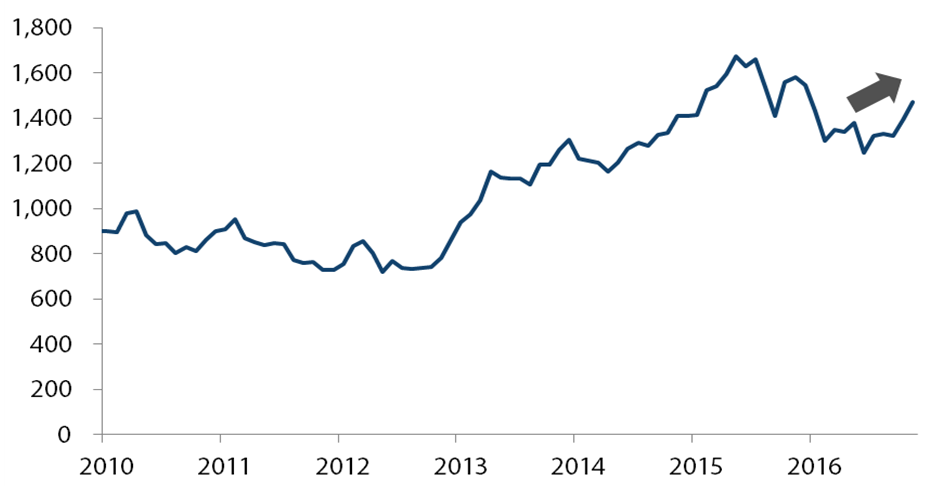 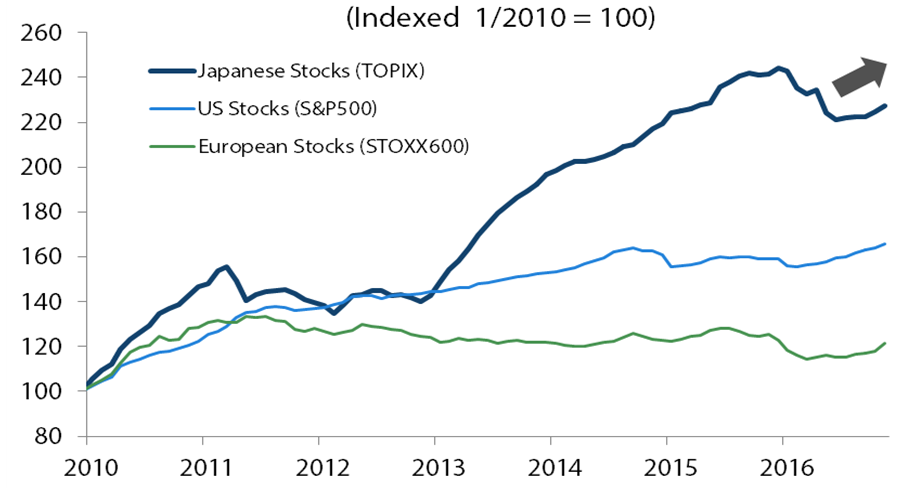 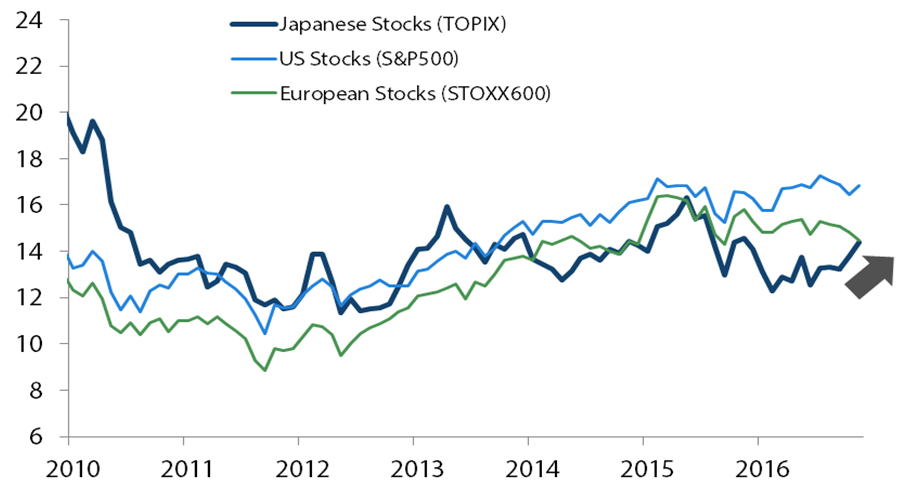 Lastly, we believe that further improvement in corporate governance at Japanese companies will translate into higher stock prices. Among the significant successes of Abenomics has been the implementation of Japan’s Stewardship Code in 2014 and of Japan’s Corporate Governance Code in 2015. A few years following the introduction of the codes, we are seeing a significantly positive change in the way corporate managers are engaging with shareholders. We believe this trend will only accelerate from here on in. The Stewardship Code is expected to be revised in 2017 to enhance asset management firms’ monitoring of and engagement with portfolio companies in order to help enhance shareholder value.

In conclusion, we believe that in an increasingly uncertain world, Japan’s less uncertain market will provide a compelling opportunity for serious investors.