Trump’s victory effectively narrows China’s options to resolve the policy trilemma that top leadership and policymakers have taken too many years to toy around with various solutions.
Share this

For many years, China has delicately avoided confronting its policy trilemma of managing interest rates and exchange rates under a quasi- open capital account by limiting the degree of openness of its capital account. However, with the CNY entering the IMF’s SDR basket, the timeline to fully open the capital account is no longer elastic. Indeed, unless the IMF decides that the world monetary system can be split into two pieces by capital controls (a remote possibility), then the next IMF SDR review due date in December 2020 will be the fixed timeline for China to fully open its capital account.

The trouble is that since the Xi-Li government took over in March 2013, the country’s debt levels have increased in both absolute and relative terms, while real and nominal GDP growth have slipped and foreign reserves have fallen sharply. With hindsight, it appears the top leaders have subtly switched gears around the middle of this year in their approach to managing their trilemma, which basically stems from rapid debt accumulation. This policy shift has since been confirmed by the reshuffling in the key ministerial positions after the Sixth Plenum in late October. Notably, Finance Minister Lou Jiwei, a known fiscal hawk and reformist was replaced and soon after, the fiscal stimulus agenda was reaffirmed and easy monetary policy was quietly toned down.

The idea behind the switch from easy monetary to easy fiscal policy was to tighten the tap of cheap money to the private sector to accelerate deleveraging while letting the state take over the role of spending and keeping up growth. In this, the central government probably sees itself more capable of balancing between growth and debt where the local governments, state-owned enterprise and “corporate” sectors had failed in recent years.

Deleveraging is now finally recognized as the only solution to solving the debt pile-up, which is in turn the ultimate solution to the trilemma. But given that so much time has been lost during which debts have surged and reserves have plunged, the stakes have increased, as has the risk of another policy failure.

Critically, Trump’s victory in the US election has steepened the US Treasury yield curve. Hence simply trying to push CNY interest rates to keep pace with rising USD rates may not be enough to prevent further loss of reserves or a decline in the CNY. It is thus no coincidence that the Chinese authorities have tightened controls on outward foreign investments and inter-company offshore loans. We wouldn’t rule out tightening in other areas, as well.

To their credit, while they may use capital controls to get around their trilemma, Chinese policymakers have always been consistent between managing monetary policy and exchange rate policy. A tight monetary policy has always been accompanied by a strong FX policy and vice versa since the pseudo-peg to the USD was dropped in July 2005.

Since the one-off 4.4% devaluation against the USD in August 2015, the CNY continued to weaken gradually against both USD and the CFETS basket until July this year. During this period, the PBOC cut RRR three times for a total of 150 bps. See Figure 1. The currency then traded sideways from July, putting a clear stop to the depreciation trend. Hints from PBOC officials that the easy monetary policy was over grew stronger, on the grounds that inflation has bottomed. Indeed, PPI reversed a four-year negative trend. Various steps were taken to tighten leverage in household mortgage and bond trading. The latter step began pushing up bond yields and credit spreads.

Trump’s victory basically reinforced the Chinese market’s reaction to the new strategy stance. Indeed because China’s policy shift preceded the US election outcome, the spikes in China rates after Trump’s victory moved in line with the sell-off in US rates - 10y CGB bond yields rose 32 bp vs 61bp on the 10y UST (from end Nov 8 to end Dec 9, 2016). See Figure 2. This wasn’t merely a case of market panic. As the PBOC gradually tightened the tap, net liquidity provision in the open market operations actually turned from net injection to withdrawal in the last week of November. The PBOC’s CNY fixing against the CFETS basket during this short post-Trump period strengthened by nearly 1.3% from a trough of 93.70 on 8 November, the day before the US election. See Figure 3.

In conclusion, Trump’s victory effectively narrows China’s options to resolve the policy trilemma that top leadership and policymakers have taken too many years to toy around with various solutions. Now, there is only one option left – stop the easy money policy, continue deleveraging, bring down the debt, and then get back on track to opening up the capital markets. 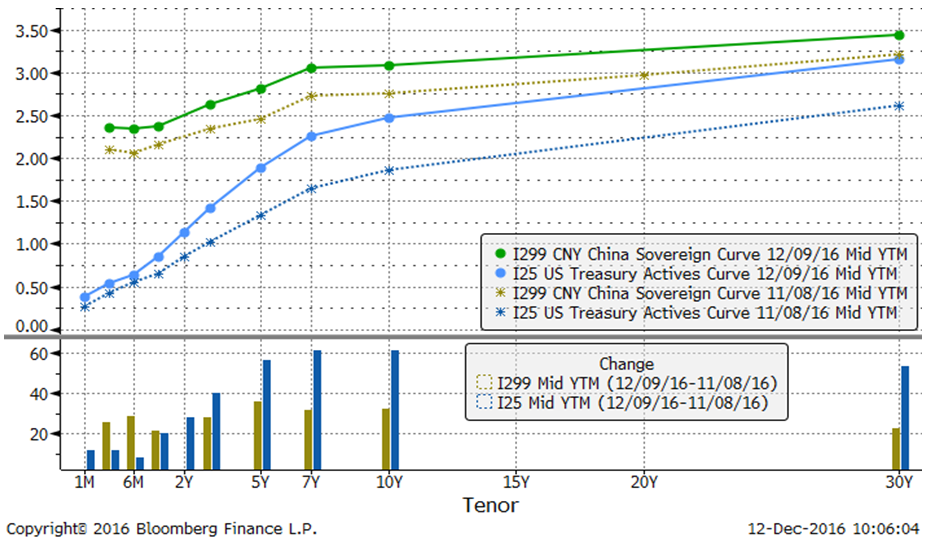