QE policies have had a material impact on bond yields and valuations. We believe that the evolution of these policies will be more important than fundamentals in indicating when bonds can break the cycle of ever-declining yields.
Share this

All other countries
Download as PDF
by James Alexander, Joint Head of Global Multi-Asset
26 September, 2016
“Toto, I’ve a feeling we’re not in Kansas anymore”
— The Wizard of Oz, 1939 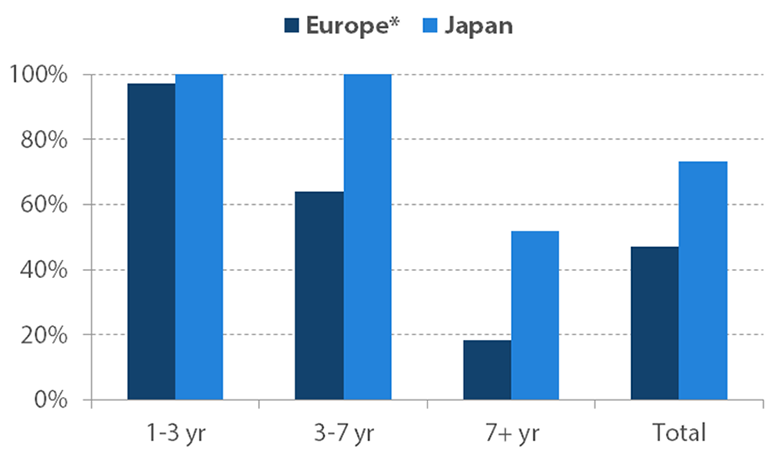 There are many reasons cited for why global interest rates are so low, including weak economic growth in the wake of the GFC, global disinflation and high debt levels. Of course, global economic recessions are not new but in the past, cash rates have remained positive, respecting the lower zero bound. The major difference this time is monetary policy intervention from the world’s most prominent central banks. In our view, the collective pressure of quantitative easing (QE) policies from the US Federal Reserve (Fed), the European Central Bank (ECB) and the Bank of Japan (BoJ) has had a material impact on bond yields and their valuations. As a result, we believe that the evolution of QE policies will be more important than fundamentals in indicating when bonds can break the cycle of ever-declining yields.

Since the monetary experiment of zero rates has been long- Central bankers are typically considered a conservative bunch, preferring to maintain a steady hand and promote stability. Severe recessions in many countries following the GFC have changed that reputation and central banks now conduct regular and substantial interventions in financial markets. The US Fed first opened the door to extraordinary policy measures in the immediate aftermath of the failure of Lehman Brothers and then kept it open with its first quantitative easing (QE1) policy in 2009, QE2 in 2010 and QE3 (starting with ‘Operation Twist’) in 2011. However, the Fed is not alone as the ECB, BoJ, Bank of England, Swiss National Bank and Swedish National Bank have also joined the QE frenzy.

Financial analysts and central bankers will be debating the efficacy of these large scale bond buying programmes in restoring economic growth and lifting inflation for years to come. However, we are primarily interested in their effect on global bond markets—in particular, the impact of QE on US Treasuries, the world’s largest and deepest bond market.

Unsurprisingly, we are not the first to ponder this question. At a US Monetary Policy Forum in 2015, an ECB presentation summarised the results from around 14 studies into the effects of large-scale asset purchases on long-term Treasury yields. The results were scaled to estimate the impact of USD 1 trillion of purchases on long-term Treasury yields. The average finding was that US 10-year Treasury yields were 42 basis points (bps) lower than they would have been in the absence of QE. There was also a fair degree of disparity in the studies, with a few finding next to no effect on yields, while one study estimated an impact of over 150 bps.

These studies used a wide variety of techniques and models to estimate the impact on long-term Treasury yields. However, we have taken a slightly different tack in our analysis by considering the impact of QE in the US (and also globally) on the ‘fair value gap’ between our model estimate of fair value for US 10-year Treasury yields and actual yields since 2008.

Our fair value yield model is based on a small handful of fundamental economic variables that we believe have proven to have explanatory power over the long term. For this analysis, we have not attempted to add a ‘QE factor’ so the model is driven by traditional economic factors only. Chart 2 shows the US 10-year Treasury yield, our fair value model results and the difference or ‘fair value gap’ between them. 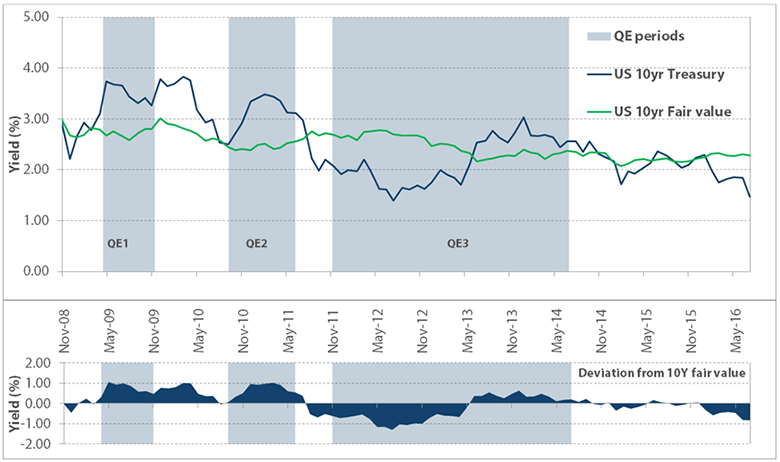 Over the period since the GFC, US Treasury yields have had a number of sharp moves in both directions, but have generally trended down. The fair value gap has also seen periods of over- and under-valuation. Somewhat surprisingly, US 10-year yields rose, and our fair value measure pushed into undervalued territory, at the start of both QE1 and QE2. With the Fed initiating large scale asset purchasing programmes, many were surprised at the time that bond yields rose against expectations.

Analysing the impact of QE on our fair value measure

Chart 3 shows our US Treasuries supply proxy measure compared with the deviations of US 10-year yields from our fair value model.

Source: Bloomberg, US Department of the Treasury, Federal Reserve Bank of New York, Nikko AM

Looking at QE1 and QE2 using our proxy, we found that it was the net Treasury availability that mattered and that US Treasury issuance also surged at the beginning of these periods. Essentially, with the left hand the Fed was removing bonds from the market, while with the right hand the US Treasury was adding even more bonds to the market at the same time. This surge in the net amount of US Treasuries available actually led to a reduction in bond prices and higher yields and did not lower yields as expected.

When we consider QE3, our fair value measure moved from being undervalued at the conclusion of QE2 to being sharply overvalued. The difference this time was that large balance sheet changes at the ECB and the BoJ due to renewed QE policies combined with US QE3 to overwhelm the increasing supply of US Treasuries, causing our proxy to decline. This decrease in the availability of US Treasuries was again mirrored by our fair value measure in the other direction.

There can be no doubt that the world’s central banks have been proactive and inventive in attempting to lift economic growth and prevent a deflationary mindset from taking hold. From breaching the lower zero bound with negative interest rate policies, to the multitude of special lending and liquidity facilities, to the large scale asset purchases in government and non-government securities, central bank officials have thrown the proverbial kitchen sink at the problem.

Our analysis suggests that the collective pressure of QE policies from the US Fed, ECB and BoJ has had a material impact on bond yields and their valuations. However, given that this impact is merely a transmission mechanism for QE to drive its main objectives on growth and inflation, it remains an open question whether QE is making any headway towards its actual goals.

When we look ahead to consider when bond yields might finally turn higher, we believe that the future actions of central banks hold the key. Bond yields will remain low as long as large scale asset purchase programmes continue to hold back the available supply of US Treasuries. We are closely watching for any signs that central banks may be considering winding down QE policies as an indication that bonds can break the cycle of ever-declining yields.

James joined Nikko AM in 2013 and has over 27 years of experience in the financial services industry. He was formerly the Head of Australian Fixed Income and Co-Head of Global Fixed Income, based in Nikko AM Australia.

James has a breadth of experience in managing fixed income portfolios across many different strategies encompassing both core fixed income exposures and liability driven investing. Prior to Nikko AM, he worked as Director of Passive & Enhanced Fixed Income and subsequently as Director of Australian Fixed Income at AllianceBerstein for over 10 years. He began his career on the trading floor of the Sydney Futures Exchange after emigrating from Canada in 1989. James holds a Bachelor of Commerce from the University of Alberta.